Four Plays That Mattered As The Falcons Beat The Panthers 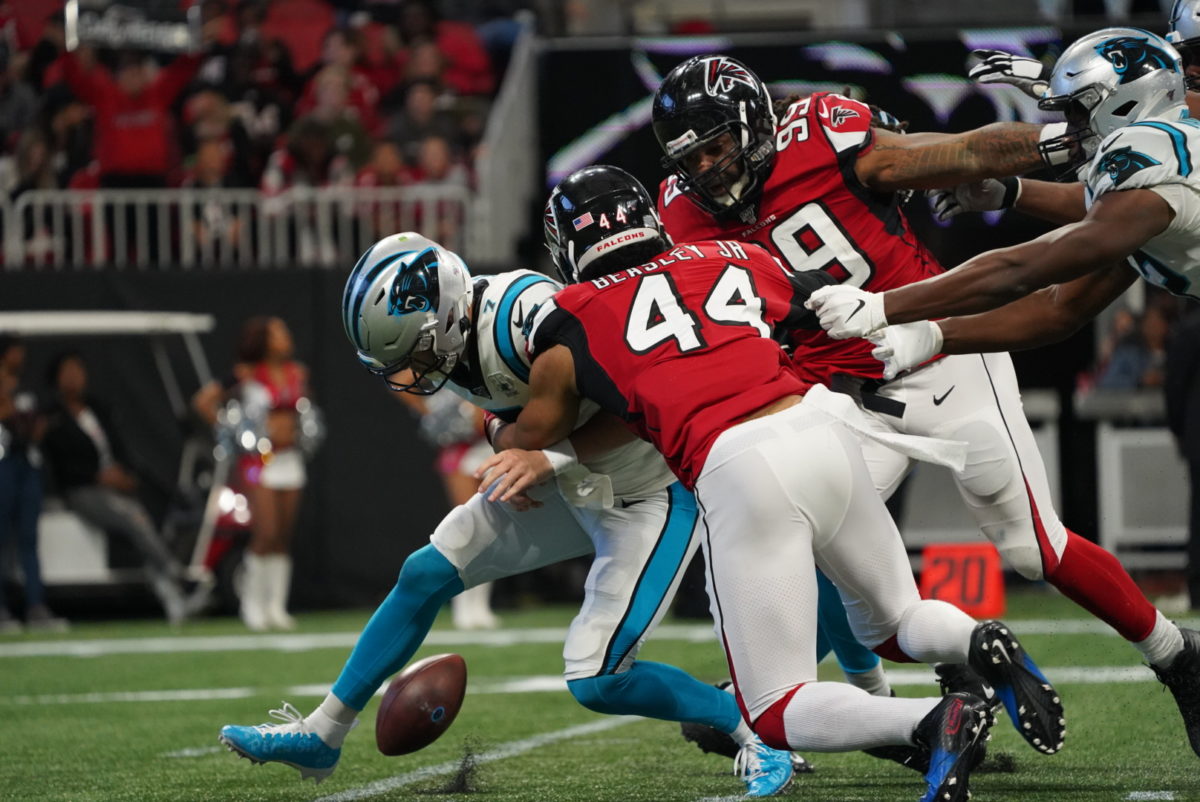 In Perry Fewell’s first game as interim head coach of the Panthers, the same issues that plagued the Panthers all season under Ron Rivera haunted them in front of a lackluster crowd at Mercedes-Benz Stadium in Atlanta as the Falcons blew out the Panthers 40-20 – the loss dropped the Panthers to 5-8 on the season and the Falcons swept the season series, outscoring the Panthers by almost 50 points over the course of two games in three weeks.

Scott Turner’s first foray as playcaller produced 345 total yards and though there were wrinkles in the first quarter that included Curtis Samuel lining up in the backfield, the Panthers inability to protect Kyle Allen – a common theme this season – put them consistently behind the sticks as they would convert only three of 10 third-down attempts and Allen was sacked five times.

Here’s how it happened:

Ridley’s Believe It Or Not 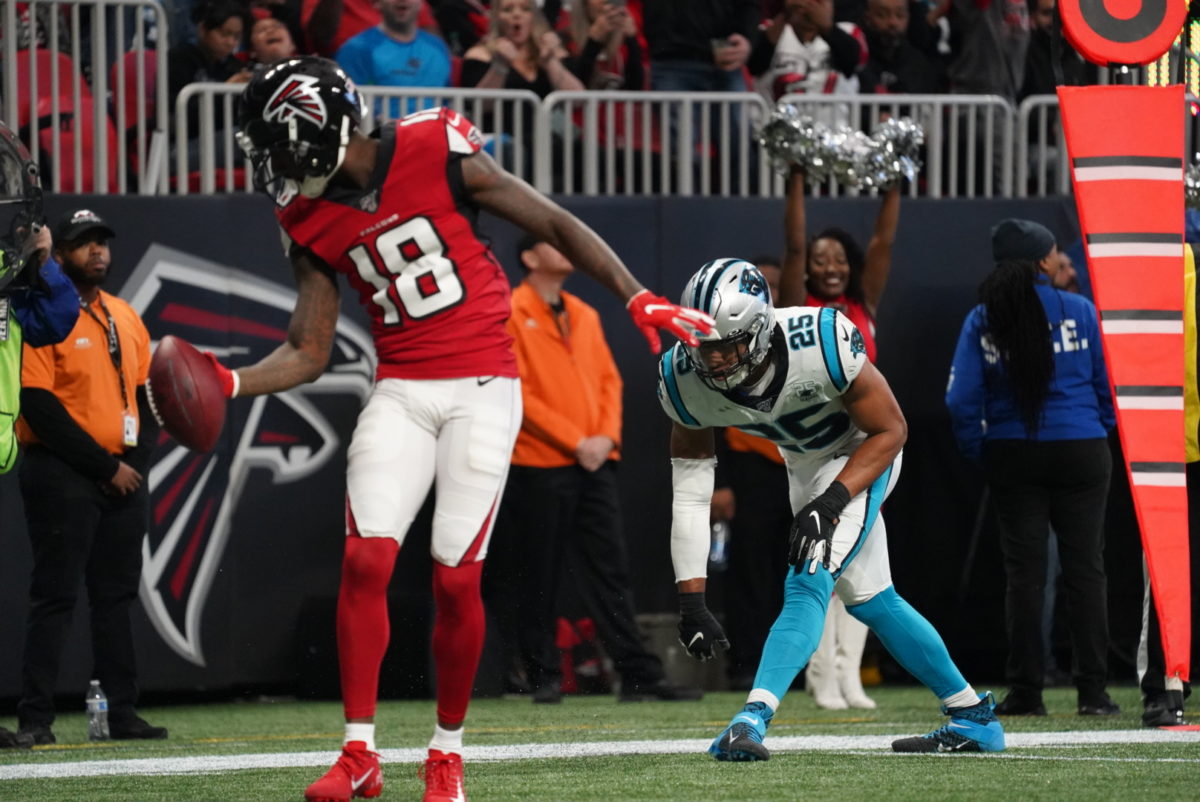 After a quarter with not a lot of offense on the board for either team, the Falcons got their first touchdown of the day with just over five minutes remaining before halftime.

To finish off a six-play, 74-yard drive, Matt Ryan completed a 15-yard pass to Calvin Ridley to make the score 10-3 as Donte Jackson jumped an underneath route to tight end Austin Hooper and Eric Reid couldn’t get to Ridley on the right side as the second-year wideout was able to walk into the end zone. but the play before that will be the one many will talk about.

Ryan completed a 38-yard pass to Julio Jones with James Bradberry draped all over him, which got the Falcons to the 18-yard line. Bradberry had excellent coverage on Jones, but sometimes it’s hard to defend one of the best wide receivers in the league – that would be Jones’ only catch of the first half as Ridley continued his dominance over the Panthers with 76 yards and a touchdown in the first half three weeks after going off for 143 yards and a score.

Ridley finished with those 76 yards after leaving the game in the second half with an abdominal injury while Jones had five catches for 66 yards – the Panthers inability to stop the run continued as the Falcons averaged over five yards per carry in the first half.

Prior to this point, the Panthers had been able to hold the Falcons offense out of the end zone as they forced them to punt twice- the Panthers were able to equal them as the teams traded field goals during a fairly uneventful first 20 minutes of play.

While The DJ Spinning A Tune

After forcing the Falcons to punt, the Panthers offense got the ball back with 2:37 before halftime. Their offense certainly made the most of it.

The highlight play of a nine-play, 87-yard drive was Allen’s 39-yard pass to D.J. Moore down the left sideline, which put the Panthers in Falcons territory. More than that, the play gave Moore 1,000 receiving yards for the season – the first Panthers player to hit the number since Greg Olsen in 2016 and the first wideout since Kelvin Benjamin in 2014.

Moore would finish with four catches for 81 yards.

After a few successful plays to Christian McCaffrey got the Panthers down to the one-yard line, the drive ended with a one-yard touchdown pass to Ian Thomas – his first touchdown of the season and third of his career – he has caught a touchdown in his last three starts. Thomas was starting for Greg Olsen, who was sidelined with a concussion.

The Falcons would strike back with a six-play, 58-yard drive to finish out the half with a Younghoe Koo field goal that put them up 13-10 going into the half – Atlanta possessed the ball for more than 18 minutes of the first half.

After Carolina gained consecutive first downs for a total of 32 yards, Falcons edge rusher Vic Beasley beat rookie left tackle Dennis Daley around the edge and Beasley was able to sack Allen and force Allen’s 11th fumble of the season. Tyeler Davison was able to recover the fumble in Panthers territory. The fumble was Allen’s seventh lost fumble of the season and the second turnover of the game after a second-quarter interception. The play put the Panthers defense in a tough position as the Falcons were on a short field and they weren’t able to offer much resistance as it took Atlanta just five plays and 46 yards to reach the end zone – Allen’s fumble resulted in a Devonta Freeman 13-yard touchdown to extend the Falcons lead to 20-10 early in the third quarter.

Freeman ended the day with 17 rushes for 84 yards.

The Panthers had turned the ball over nine times during their four-game losing streak while only producing one turnover. They lost the turnover battle 4-0 against Atlanta.

Housed When You Bring The House 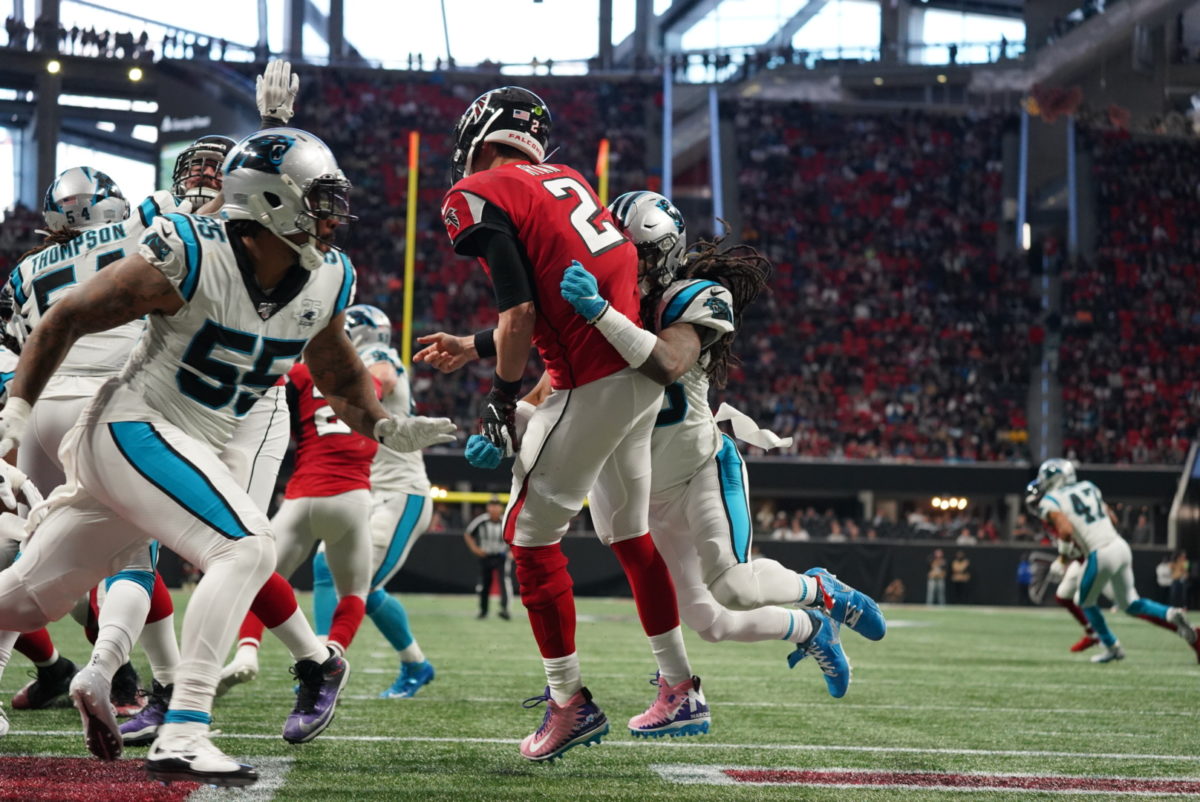 After a penalty on Kenjon Barner during a Panthers punt put the ball inside the five-yard line for the Falcons to start their second possession of the second half, the Falcons would have to go the length of the field to score a touchdown – the problem was they would do exactly that.

On 3rd-and 8 from the Falcons seven-yard line, the Panthers brought an all-out blitz, including safety Tre Boston and Ryan completed a deep pass to WR Olamide Zaccheaus for a 93-yard touchdown to extend their lead to 27-10 – Donte Jackson was covering Zaccheaus downfield and couldn’t bring him down around midfield – it was first catch of the undrafted free agent wide receiver’s career.

Carolina’s secondary had problems stopping the Atlanta passing game as Ryan had over 300 yards passing and two scores by the end of the third quarter – he would finish the day with 313 yards and the Panthers would never get closer than the 20 point margin the long touchdown would provide.