GLSOAT: This Is A J.J. Jansen Article 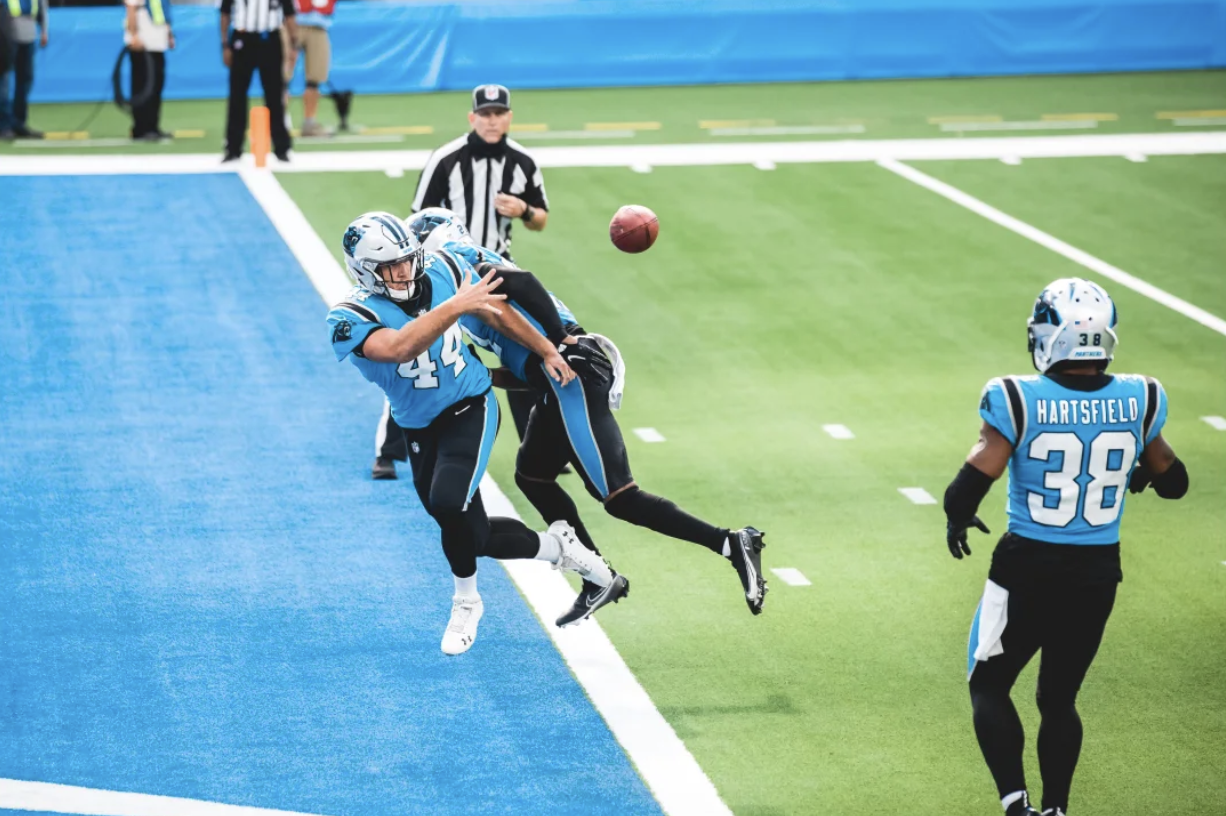 Way back when, longtime Panthers head coach John Fox used to be fond of a saying – “A punt is not a bad play.” On Sunday, a punt – and the last remaining Panther to have played for Fox – won Carolina the game.

J.J. Jansen, the Panthers’ long snapper, is the only member of the team to have played for John Fox, Ron Rivera, and now Matt Rhule – in four weeks, he will pass Steve Smith for the second-most games played in a Panthers uniform, behind only fellow special teams stalwart John Kasay. Normally, Jansen’s presence on the team is one assumed, but hardly notable. Which, as a long snapper, is a good thing.

But on Sunday, after so many years blending into the scenery of the Panthers’ Special Teams unit, Jansen burst to the forefront with the pivotal play that earned Carolina the first win of the Rhule era.

Punting from the Los Angeles Chargers’ 40 yard line with a five point lead, the Panthers needed to make the Chargers’ attempt at a game-winning drive as difficult as they possibly could. They would execute perfectly, with Jansen streaking down the field to haul in Joseph Charlton’s punt just short of the end zone. Checking up hard, Jansen was able to stop his momentum at the one-yard line, preventing a touchback and forcing the Bolts to try and attempt a 99-yard drive.

10 plays later, the Chargers came 28 yards short of the end zone. And Jansen, never one for the spotlight, suddenly became hailed as the day’s conquering hero.

“I knew going into that situation that a couple different possibilities would kind of play out. I didn’t know if they would include me or not,” said Jansen explained in a typical cerebral breakdown Monday. “When they went double-gunner there in a seven-box situation, I knew they were gonna try to force us to down the ball inside the 10. I kind of knew ‘Hey, if this ball’s rolling on the ground, we’re gonna try to let the clock roll out as much as we can.’ So I kind of had a thought that that might come up.”

“… I’m one of the first guys out. And so luckily there wasn’t anybody on me, so I could look up, find the ball, and get a sense. … Ball was a beautifully hit punt by Joe. Landed on its belly so it bounces straight up. And from there, I knew I was gonna be able to make a play.”

While Jansen has, time and again, excels under the radar since joining the Panthers in 2009 – his last bad snap was in the team’s opener in 2010 against the Giants – his personality is one of the biggest in Carolina’s locker room. Speaking post-game, kicker Joey Slye stated that Jansen’s role as hero for a day wasn’t something he fell into: Rather, it’s something he’s always prepared for.

“I think if you talk to J.J., I think J.J. thinks he’s going to be the hero each game,” said kicker Joey Slye. “I think that one was kind of set in stone.”

Of all the players it could have been, Jansen being the “hero” of Matt Rhule’s first win as Panthers head coach sweetens the occasion a great deal. As the longest tenured member of the team, Jansen is a true link to the good and bad times of the past alike. And he’s also reflective of the sort of old-school approach of Panthers football that was turned into the standard by both Fox and Rivera.

With as many veteran players as the Panthers let go during the offseason, there was room to wonder whether a “football guy” like Jansen meshed with Rhule, whose billing was as an innovator and “program builder”. As it turns out, Jansen embraces and aligns quite well with Rhule’s vision – the vision of a “football guy” like those who came before him.

Though his role may be underappreciated by some – such is the life of a career special teamer – Jansen was a significant part of the behind the scenes celebration of Sunday’s victory. While Jansen was around when the Panthers soared to the top of the NFL world in the mid-2010s, he has also been there for some of the darkest times in the history of the franchise, including the end of the Fox era in 2010 and the meltdown that accompanied the end of the Rivera era last year.

Considering that, quarterback Teddy Bridgewater was sure to include Jansen as among those veterans who Week 3’s triumph was extra special for.

“You talk about J.J., he’s a guy who’s been here for awhile and he was a part of what happened last year,” said Bridgewater. “For us just to get a win as a team for J.J., Shaq [Thompson], Tre Boston, myself, Mike Davis – Just all of us, man, it’s huge.”

Though he’s now coming off of one of the more recognizable plays of his career, Jansen’s life and role isn’t likely to change dramatically over the next several days: Perhaps he’ll sell a few more jerseys among true diehard fans, and there’ll surely be a few more ‘J.J. Jansen Appreciation Posts’ on social media. But as long as the fun lasts, his role in getting the Panthers off the schnide and back in the win column should be enthusiastically celebrated.

For it’s a celebration not only of the first of more triumphs to come for Carolina, but also a rare opportunity to recognize the hard work and dedication of one of the constants of Panthers football.

A man who, however tongue-in-cheek it is, has earned the title of GLSOAT in some circles – “Greatest Long Snapper of All-Time.”