Going Out On His Own Terms: Why Greg Olsen Came Back 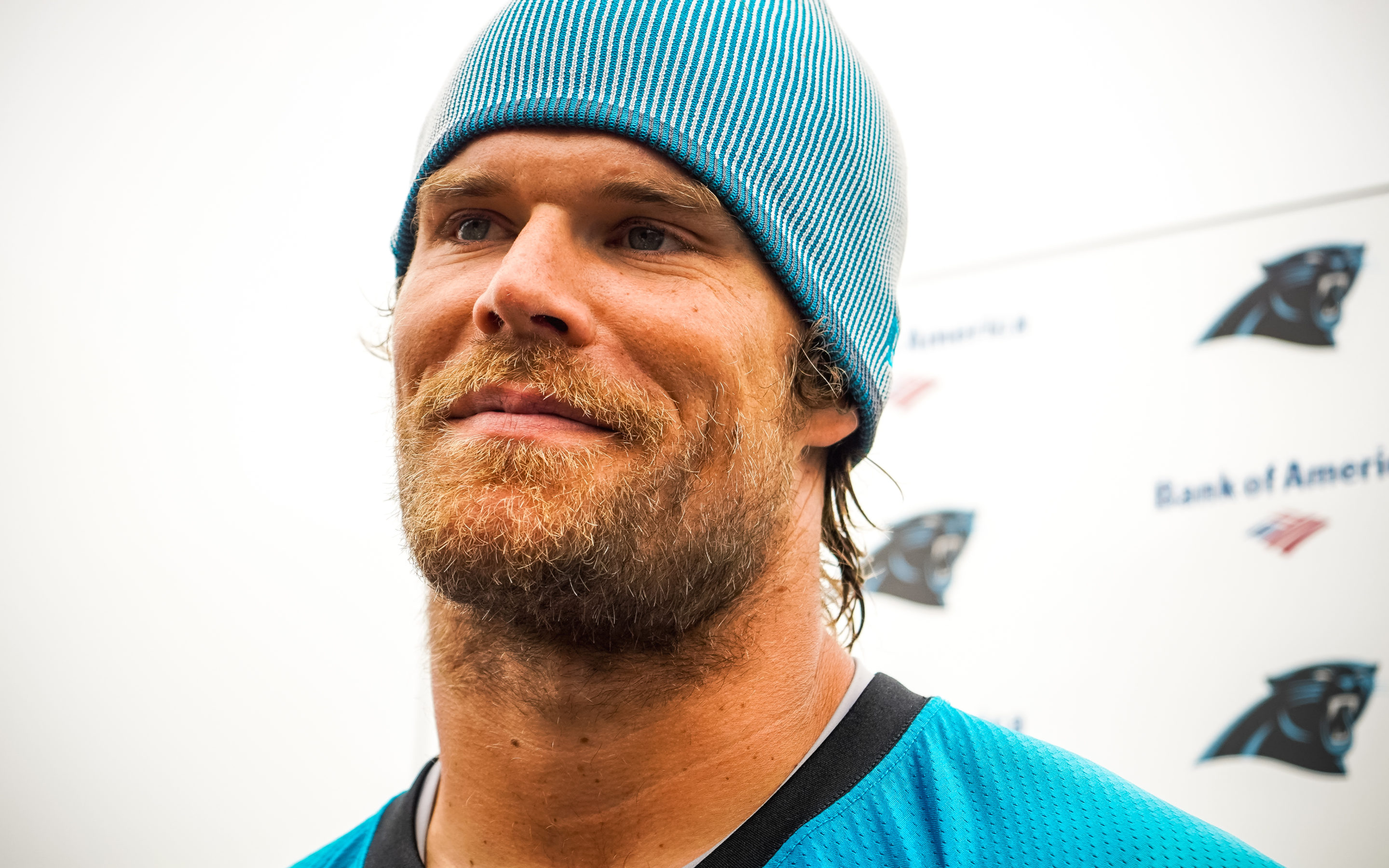 Everyone knows the story.

In the days follwing Monday Night Football analyst and former tight end Jason Witten deciding to abruptly change course and return to the Dallas Cowboys a year after joining the most decorated booth in the NFL, rumors swirled that Panthers tight end Greg Olsen was leaving Carolina for the lure of the NFL’s flagship program. During his 2017 stint on injured reserve, Olsen sat in on a broadcast booth for FOX and has been a guest analyst on multiple studio shows over the past few seasons; those appearances, in addition to his audition for the job that Witten eventually took, were called ‘practice reps’ for a future time.

But that time certainly isn’t now — because Olsen isn’t done on the football field.

“I’ve had some cool opportunities to do while playing and also opportunities to consider about being done, but when it came down to it, I still feel like I have a lot to accomplish in my career,” said Olsen this week. “The last two years, obviously, haven’t been how I want to close out a long career.”

Olsen is, of course, speaking of the foot injury that has plagued him since Week 2 of the 2017 season and has cost him 16 games over the span of two seasons – after three consecutive 1,000 yard seasons for the most consistently productive tight end in the league, Olsen hasn’t eclipsed 500 in the past two years combined. 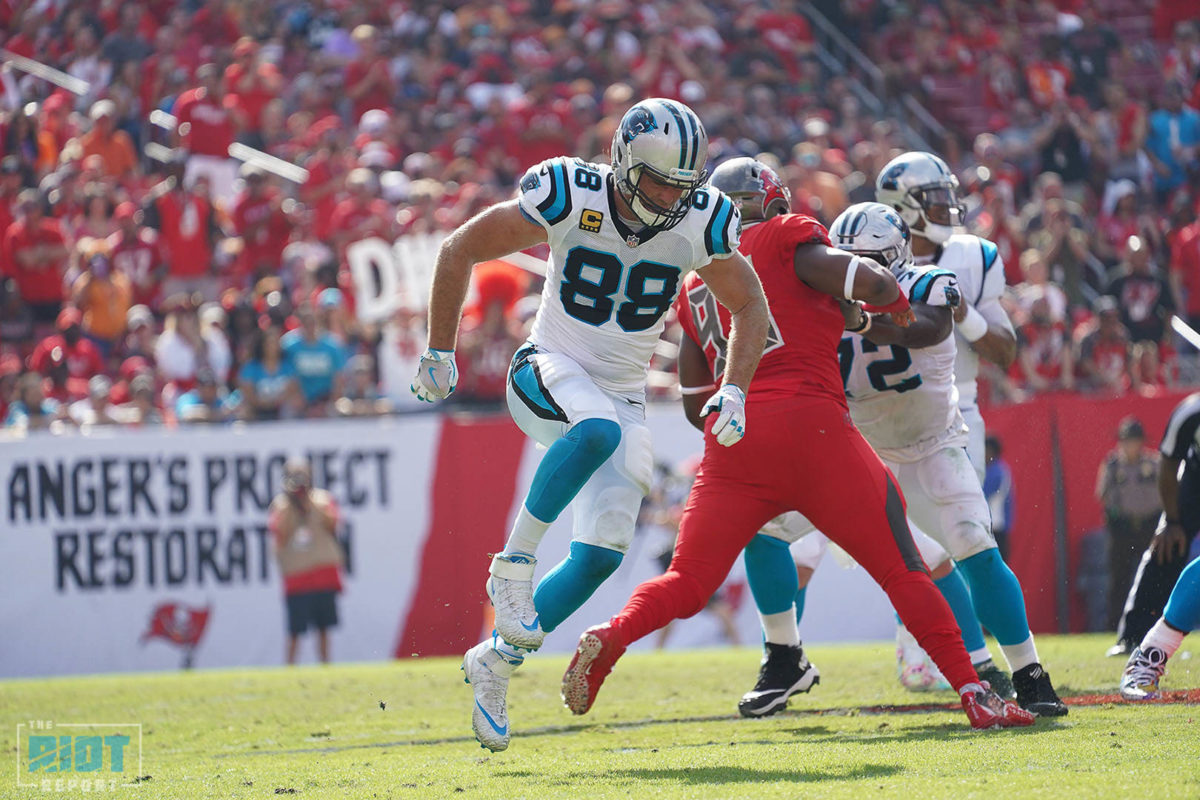 The injury to Greg Olsen happened in this moment

Now that Olsen is fully cleared for activities after yet another surgery on his fifth metatarsal in December – he has been “for a while now” – he’s ready to achieve some of the goals that he laid out for himself when he entered the league as a first round pick in 2007. While that certainly includes some personal accolades – we’ll get to those in a moment – the success of his team precludes his personal milestones.

“Getting a little taste of that a few years ago and being so close,” said Olsen about what kind of goals he has as the oldest player on the team’s career winds down. “You get to that Super Bowl and you kind of think back to missed opportunities – that missed opportunity word creeps in a lot, but that was a prime chance to do something special that year…so that’s always gnawing at you in the back of your mind.”

But personal statistical goals had to have weighed on Olsen’s mind as he weighed coming back for another year – he has two remaining on the contract extension he signed last April – after the tight end took so much pride in becoming the first tight end in history to have three consecutive 1,000 yard seasons.

He’ll vault over Rob Gronkowski, Jackie Smith, Ozzie Newsome and Carroll Dale with 430 yards in 2019, but another 1,000 yard season would land him in the top five in terms of yardage ever from a tight end – with only current and future Hall of Famers above him.

It’s not only accolades, both personal and team-wise, that brought him back into the fold, it’s the opportunity to help mold the younger players on the Panthers, including second-year tight end Ian Thomas, who finished the year with 36 receptions for 333 yards, both new franchise records among rookie tight ends, after taking the bulk of the snaps in Olsen’s absence.

“It seems like not long ago, I was one of the young guys and looking at the old guys thinking that I [couldn’t] believe how old they are,” said the always affable Olsen. “With that comes a lot of responsibility; with that comes a lot of people looking at you to set an example and to show guys how things are supposed to be done and set a standard of how things are expected around here.”

A standard that he holds himself to moreso than any other player in the locker room.

“Going out with 200 yards would be a tough way to finish, [especially] when you’re not used to that – I know what I can do, I’ve just got to stay on the field,” said Olsen as he glanced down at the right foot that has caused him so much heartache over the past two seasons. “Hopefully this little bone in my foot doesn’t keep breaking – other than that, I’ve been fine.”