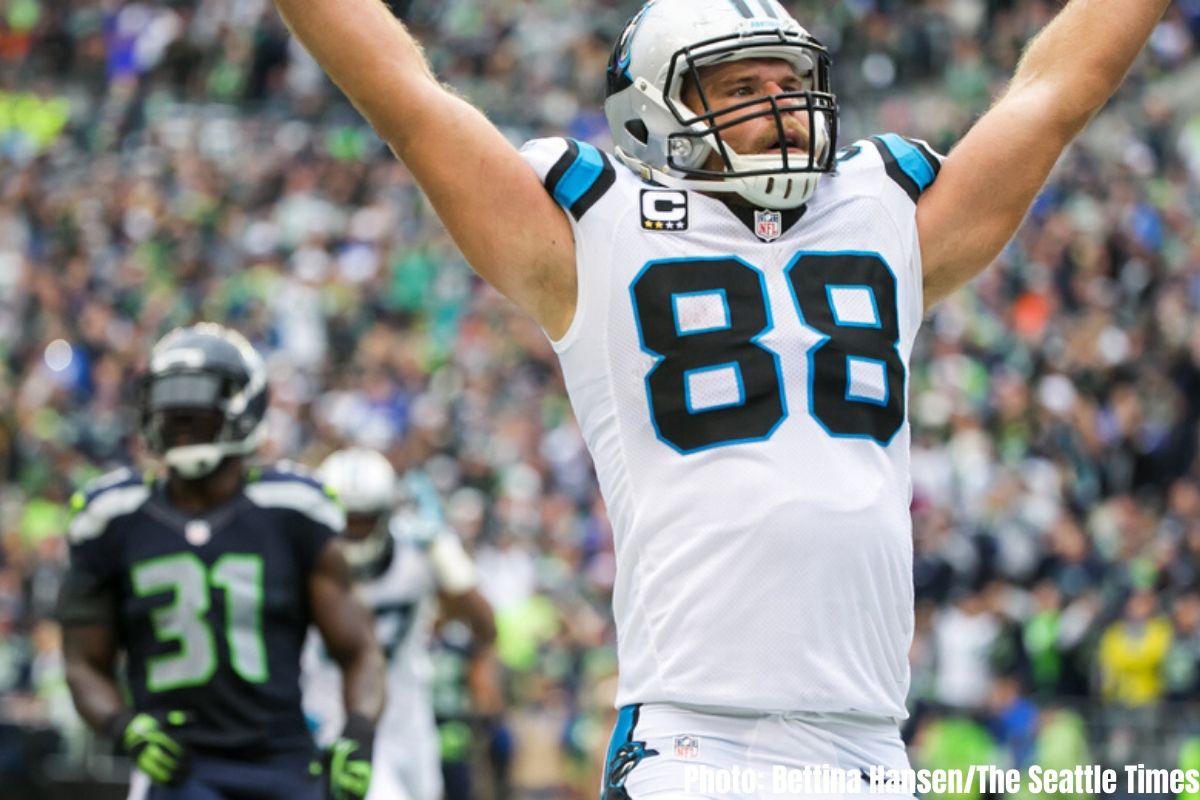 The winds of change have blown through Bank Of America Stadium in the past month – after Luke Kuechly’s retirement a few weeks ago, the Panthers released Greg Olsen Monday, effectively signaling the end of an era in Carolina.

Olsen was already a four-year veteran before he and Newton joined Carolina in 2011 and formed an incredible bond, hooking up in the end zone 35 times in spite of numerous injuries and setbacks over the past couple of years. Olsen mentioned that he wanted to be used more as a wide receiver prior to being traded to the Panthers….and that’s exactly what happened.

In nine seasons, Olsen became one of the most iconic and beloved players in franchise history, breaking numerous franchise records at the tight end position. Most notably, however, he became the first tight end in NFL history to accomplish three consecutive seasons of 1,000 receiving yards or more. He had five consecutive seasons of at least 800 yards or more between 2012 and 2016, was selected to three Pro Bowls and was a Second Team All-Pro selection twice.

Which makes it sad to say that we all saw the end of his career in Carolina coming. Olsen’s last three seasons were marred by injuries and he missed 18 games between 2017 and 2019. Even when he played in the majority of the 2019 season, it was obvious he was no longer the same, dominant force he once was. And at the age of 34, that’s perfectly fine, but it was obvious both parties needed to move on – especially with Olsen due the second-highest salary among tight ends in 2020.

But even though Olsen’s time in black, blue and silver is up, we can still treasure the numerous memories he has given the franchise. For years, fans became frustrated at the lack of wide receiving options available for Cam Newton, but Olsen was the one guy fans knew could be trusted to make a consistent string of huge plays when he was relied upon.

With so many memories and so many great performances, which one stood out for the Panthers legend? To answer that question, we’ll need to go back to the franchise’s height of glory.

In my opinion, no game defined Olsen’s time in a Panthers uniform more than his performance in one of the toughest road venues in football – at a time when the rest of the NFL was beginning to notice not just how different that season’s Panthers team looked, but how dangerous they were as well. Despite a two-score deficit in the fourth quarter, Olsen and company stole victory from the jaws of defeat and the tight end put up eight receptions for 134 yards — along with the game winning touchdown.

Let’s rewind the tape and blast to the past for what I believe was Greg Olsen’s finest hour:

With just over two minutes remaining in the first quarter and the Panthers trailing 3-0, Olsen’s 12-yard catch on this play kept an eventual scoring drive on it’s feet. Here, he’s lined up just to the right of the offensive line.

Olsen is able to cross outside here, and Newton was able to spot him and rip a laser just inside the numbers.

Olsen pulls said laser in with impressive extension for the catch.

Olsen never showcased the insane athleticism of guys like Rob Gronkowski or Travis Kelce, but he didn’t need to because of his consistency. He was a highly consistent route runner and pass catcher in Charlotte, playing at a level the franchise had not seen at the position since the days of Wesley Walls.

Olsen was able to secure this diving attempt and continue a drive that would extend into the second quarter. But it was not until the middle of the third quarter that he showed the Legion of Boom what true fear looked like.

This time, Olsen lines up on the left side of the formation.

From the play’s birth, notice Olsen’s left foot being highlighted. He uses a subtle but effective shade of hesitation, delaying the movement of corner Cary Williams…

…and giving Olsen a quick edge on the shallow crossing route.

…giving Newton a very easy throw and a plentitude of yards after the catch.

This play was important because, at the time, the Panthers were trailing 20-7 and were facing a third-and-3. Olsen’s separation and ability to get open puts the offense just outside the red zone. Four plays later, a Jonathan Stewart touchdown cut the Seattle lead to one score.

But just before Stewart’s touchdown, Olsen added another chunk play that put the Panthers into true striking distance.

Lined up as an H-back here, he doesn’t waste the advantage presented to him.

What we have here is a glorious H-back wheel route, accomplished by using the X receiver at the top to clear space for Olsen. No one on the Seahawks defense recognizes the route, so safety help over the top for the linebacker isn’t even an option.

This play shows more of Olsen’s skillset than the previous H-back wheel route did. At the top of this route…

…Olsen turns his hips and cuts inside. Forcing this to a pass catcher who is still blanketed to a degree by Seattle’s zone coverage is risky, and a big armed, tight-window passer is needed to make this work.

Fortunately for the Panthers, they had 2015’s Most Valuable Player at quarterback.

Not only does Olsen hold up his end of the bargain with an impressive catch in a tiny window, but he even carries this ball to the 1-yard line, and the Panthers score on the very next play to cut Seattle’s fourth quarter lead to three, 23-20.

One thing that’s always impressed me about Olsen is his quick hip movement. At the top of his routes, he’s often cutting on a dime, being turned around and demanding the ball in the blink of an eye. It’s part of what separated him from the garden-variety receiving tight end…..and his impressive hands are on display once again in the game’s most crucial quarter.

Finally, let’s take a look at the most iconic play of Olsen’s career.

“We had run this play earlier in the game and I took it all the way down the 1-yard line. Richard Sherman tried to undercut that one and I remember when Cam threw it thinking, ‘Oh, (expletive).’ I just went up and was able to catch it. We scored on the next play and got the ball back right before the 2-minute warning and had an awesome 2-minute drive,” Olsen told Max Henson last year.

“Cotch made that critical one-handed catch. We got to the 26 and spiked it. We called the same play from the previous drive. This time I was able to take it up the seam. They had some communication issues – I’m not sure which coverage they thought they were in. Obviously, it was a relatively easy catch. All I could think to myself was, ‘Don’t clip your foot on the turf and trip.'”

Of course, this needs no introduction. This is one of the most celebrated plays in franchise history for a reason, so let’s go inside and see how it happened.

As you can see, Newton’s pump fake holds the left side of the Seahawks defense for a brief moment, resulting in a communication breakdown – some of the secondary thought they were in Cover 2, some thought Cover 3 – that gives Olsen just enough time to separate as Cam delivers a bullet for the go-ahead score with 32 seconds left.

At the time, the Panthers were off to an impressive 4-0 start, but needed a signature win to silence skeptics who claimed they had not faced a real threat. Though the Seahawks were 2-3 at the time (and would drop to 2-4), this was that signature win. The two teams would meet again in the Divisional Round after Seattle rebounded in the second half of the season, with the Panthers prevailing once again at home.

Both of those matchups came with quality performances from Olsen, but it’s the regular season matchup at Seattle where I’ll remember him most fondly. This game truly spoke to Olsen’s desire when coming to Carolina, demanding to be a heavy feature in the Panthers passing attack. And as he proved for the vast majority of his career in Charlotte, he delivered the goods when needed most.

Even when Cam Newton had his struggles in the first three quarters of this game, Olsen was constantly there as his security blanket, and when the MVP caught fire in the fourth quarter, his best receiver remained red hot. It was a performance for the ages for Olsen – one that Panthers fans will remember for a long, long time.

And this was a performance Olsen would continue to offer until succumbing to injuries late in his Panthers career. But it was moments like these that make us realize how much we will miss his brilliant efforts from week to week, even if that means seeing him play for a different team.

No matter where Olsen plays, and no matter how far he goes with his new team or his new career in a broadcast booth, the city of Charlotte will always be his home – and Week 6 against Seattle in 2015 will be the greatest game I’ve ever seen him play.