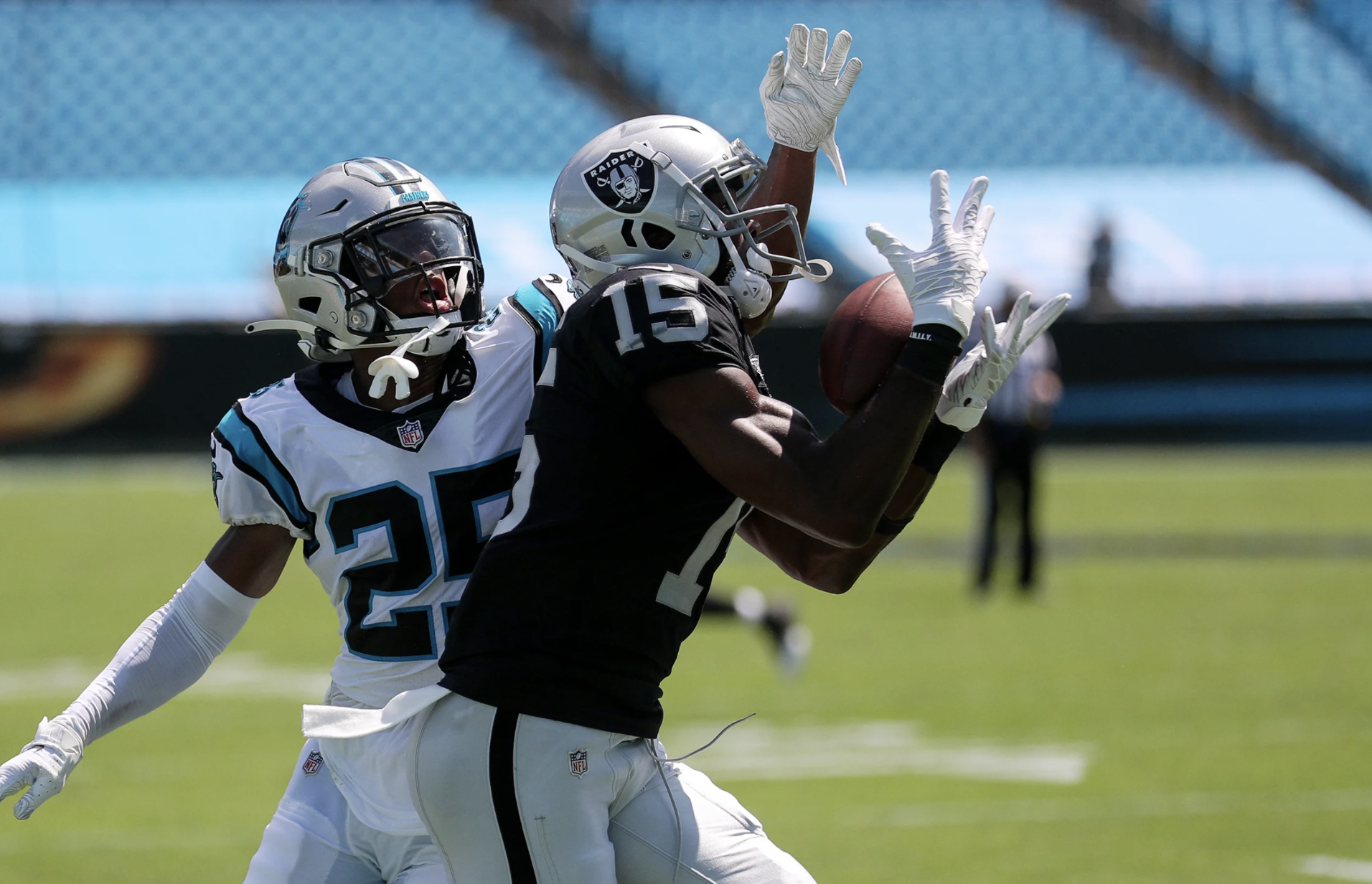 The Panthers inexperienced secondary was exactly who we thought they were – at least after one game.

Anytime you have a young secondary like the Panthers, there are going to be growing pains. But when a team with one of the youngest secondary in the league loses its most experienced cornerback only two possessions into the game, pass coverage is going to go from hard to next to impossible – that certainly was the case in the Panthers 34-30 loss to the Raiders on Sunday.

Once Donte Jackson left the game with an ankle injury, fourth-round pick Troy Pride, Jr. and Rasul Douglas were the primary cornerbacks on the Panthers defense. Douglas was claimed off waivers just a week ago from the Eagles but was quickly thrown into action, probably faster than the Panthers would have liked – Douglas had only been practicing with the team since the Wednesday

Pride said the Panther players just had to have the next man up mentality.

“We had Rasul Douglas who came in and provided a spark to our defense and helped us get some stops,” Pride, who finished with seven combined tackles in his debut, said. “But at that point, when the hats is on your head, you wear it.”

“To lose one of our best defenders early on and have Rasul Douglas who has only been here for four days, go out there and play, to battle back from some early big plays, to fight, scratch and claw to take the lead back at the end of the game, I was proud of the guys,” reiterated Matt Rhule. “We were just a play away.”

Raiders quarterback Derek Carr was able to complete 22-of-30 passes for 239 yards and a touchdown as he finished with a quarterback rating of 107.5 and completed over 70% of his passes and 9-of-12 in the second half. The Panthers also failed to record a sack on Carr, which put more pressure on their linebackers and their secondary. 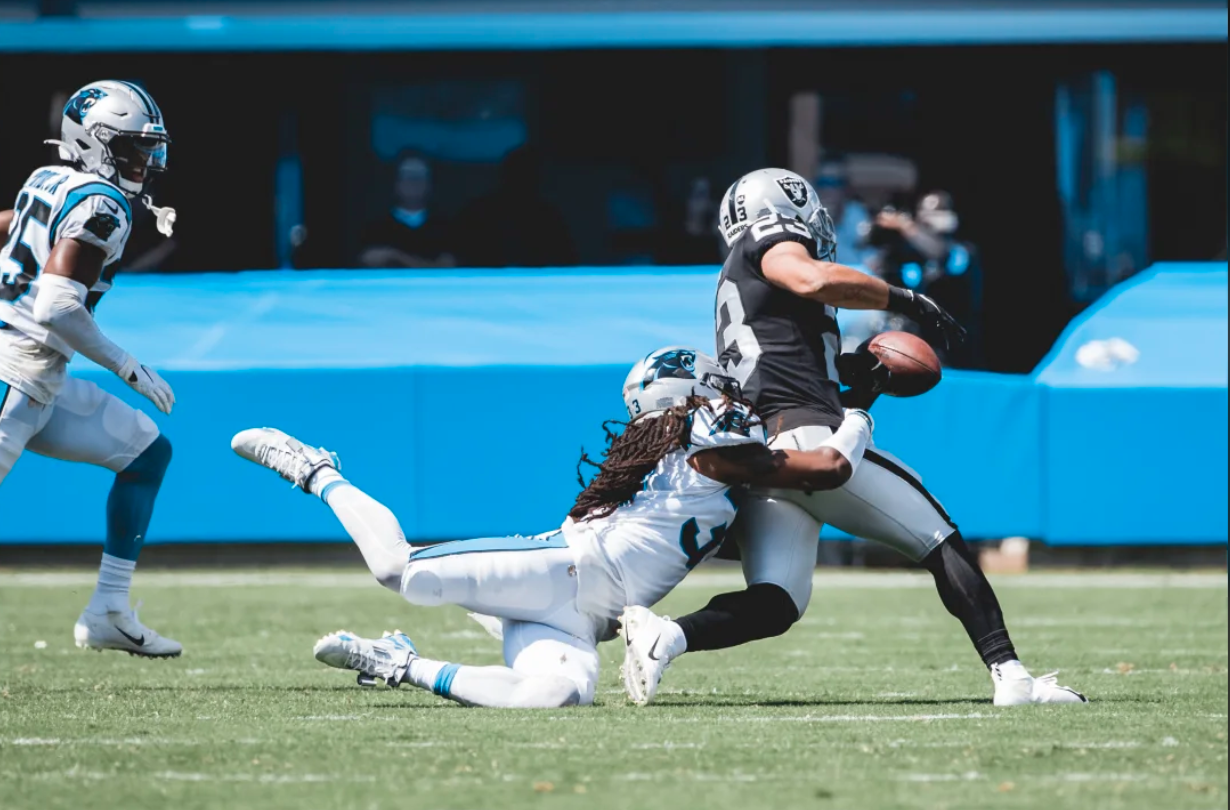 Late in the fourth quarter, up 30-27, the Panthers seemingly appeared poised to take control of the game – they had an opportunity to hold the Raiders to a long field goal or even to give the ball back to an offense that had just scored on a 75-yard touchdown pass to Robby Anderson. But on third-and-8 from the Panthers 35-yard line, a pass interference call on Tahir Whitehead gave the Raiders a first down on the Panthers 17 yard line.

Not having any preseason games certainly didn’t help the Panthers secondary – this was the first time they’ve played against a receiver corps which was not their own.

The rookie Pride, starting with veteran Eli Apple starting the season on injured reserve, had his share of struggles – he gave up a reception to Nelson Agholor on a 23-yard pass from Carr to make the score 17-15 before halftime.

“We compete every day and we have some great guys on our squad that provide difficult challenges,” Pride said. “So, it was a little different, but the fact of the matter is we compete all the time, and we should always be ready to go.”

Jacobs rushing for 93 yards and three touchdowns definitely didn’t help the Panthers secondary either – they had to worry about containing the Raiders running back on the ground and in pass coverage – he also registered four receptions for 46 yards on the day.

“We knew going in….that would be the game with their big powerful front,” said Rhule. “I think the drives where we had success, we stopped them on first down  and had them at second and long. [We] just weren’t able to do that enough to have a better day.”

Middle linebacker Tahir Whitehead didn’t make any excuses for his performance, or the Panthers defense, in the loss.

“I think it was more of us not doing our job today,” Whitehead said. “After we went to the sideline to see what was going on, it was a matter of missed tackles. No credit away from Josh, but when it all boiled down, it was us not executing the tackling technique. You can make an excuse well, it is the first game, but that’s not good enough.”

The Panthers will have their hands full next week as they will face a Tampa Bay Buccaneers team with Tom Brady in addition to receiver Mike Evans, Chris Godwin, and Rob Gronkowski.

There is certainly one area Rhule would like to see improve next weekend.

“I think we had a hard time on third down and third and shorts,” Rhule said. “That just goes back to their ability to run the football. There were some play actions that hurt us. There weren’t a lot of drop-back passes, there were a lot of play actions, run the ball, get the ball to the perimeter.”

Although the Raiders started out the game converting five of seven third-down attempts, the Panthers were able to get them off the field on four of the next five attempts – although that one conversion ended up being the conversion that cost them the game.

A young team that makes mistakes and isn’t able to contain one of the better rushers in the league isn’t an issue – but a young team that makes the same mistakes on a weekly basis would be a problem….that’s a bigger issue. It will be up to defensive coordinator Phil Snow and Rhule to go back to the drawing board and makes sure that they show improvement.