Keeping It Simple: How The Panthers Can Beat The Saints 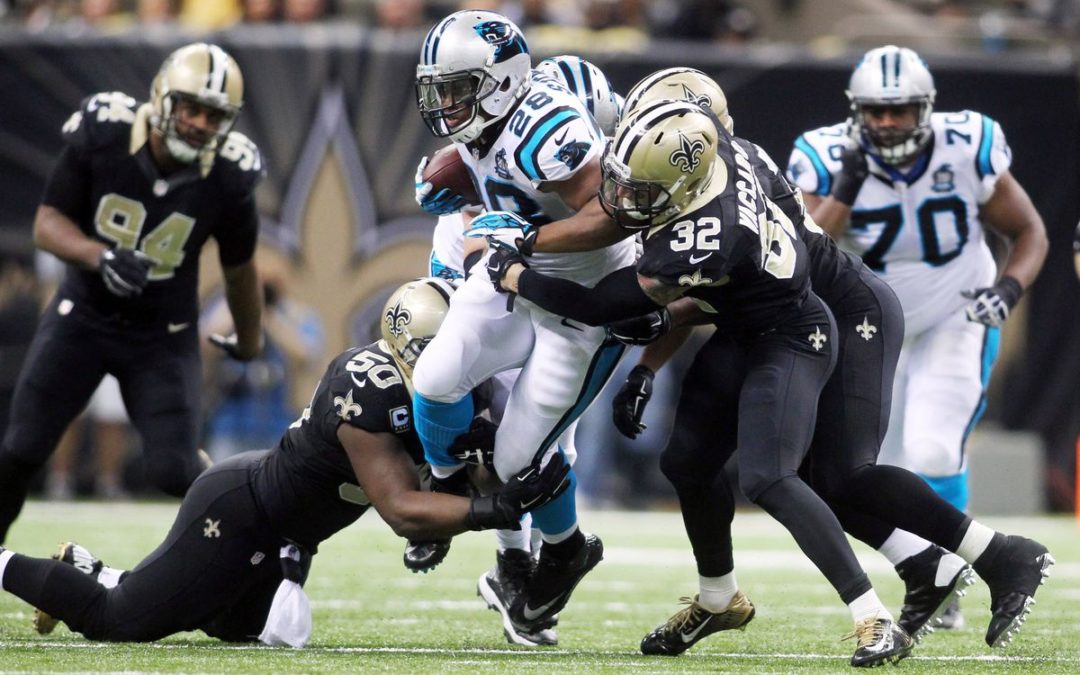 The Panthers’ game against the Saints on Sunday is expected to be one of the deciding games in the NFC playoff picture. While the Saints have been one of the best teams in football over the past two months, they are coming off a loss to the Los Angeles Rams and given how well the Panthers have played at times this season, the Panthers do have a real chance of coming back from New Orleans with a win. However, it will take a performance more like the one against New England in Week 4 and less like their ugly win last week against the Jets to hand the Saints their second consecutive loss and wrest control of the NFC South.

In their first meeting against the Saints this season, the Panthers did a decent job of stopping the run on early downs, holding Ingram to 4.0 yards per carry for the game. However, that is a long way off from the 2.8 yards per carry that the Rams held him to during their win. What should give the Panthers cause for optimism, however, is that they held Ingram closer to that 2.8-yard level for much of the game but made a handful of small mistakes in the ground game to let the Saints off the hook.

The most basic way in which the Panthers can help their run defense is in the use of suitable formations. Avoiding multiple high safety formations and playing significantly more press will bring more defenders down to the line and would hopefully prevent plays such as these:

This isn’t a significant scheme change as many passing plays have the corner controlling the height at which they start, the Panthers should be able to make this change without having to take the risk of reshaping the defense. The other way in which the Panthers will need to improve compared to their first meeting is in the discipline they show against the run.

Gap discipline, good pursuit angles and keeping outside-contain are not lofty expectations for a run defense, but against the Saints in Week 3, the Panthers’ defense made mistakes in all of these areas; Luke Kuechly is one of the best middle linebackers in NFL history, but the Saints game was not one of his best. On the following two plays, he first overpursues and then, in possibly a subconscious attempt to compensate, underpursues.

Kuechly is usually much better than this, so there most likely won’t be a repetition of these mistakes on Sunday. However, lane discipline as a whole was also an issue and this is harder to dismiss as an anomaly; much of it was due to the Saints moving a players across the formation and the Panthers failing to adjust across the line, leaving a gap unfilled; such as on the following two plays.

Hopefully, this is an issue that the Panthers’ coaches will have identified and will have focused on as part of their preparation. Mike Adams, in particular. struggled against the Saints; though that issue might well have been fixed due to greater familiarity with the defensive scheme as the season goes on. The final area where the Panthers need to be careful is in maintaining the edge; the Saints were able to pull off a few big outside runs in the first game when the edge defender failed to maintain contain; this is something that should be fairly simple to fix though it will be hard to know either way until Sunday:

Stopping the Saints running game certainly won’t be easy, but the Panthers did much of the hard work during their first meeting only to undo that with mundane mistakes. A key throughout this game is going to be making the Saints actually beat the Panthers, rather than the Panthers beating themselves. If the Panthers bring defenders down to the line and maintain their discipline then they have every chance of preventing the Saints from moving the ball with ease.

The Saints offensive line has gotten a lot of praise throughout this season; while they have been solid in the run game, they have been able to get away with questionable pass protection due to the speed with which Drew Brees gets the ball out. One way which the Panthers could limit the ball coming out so early is with the increased use of press coverage across the formation. This was mentioned as a means to help the run game, but, if used sensibly, could also help the Panthers pass defense.

On both of these plays,the Saints are able to pick up easy yardage due to the large cushion that the defense shows. By pressing these defenders at the line, there is a good chance that these passes wouldn’t have been completed; the issue that press comes with is that it runs the risk of getting beat over the top. However, while Michael Thomas isn’t slow, the only Saints receiver to posses elite deep speed is Ted Ginn, Jr. If the Panthers use safety help to double Ginn over the top, the Panthers can play underneath zone-press without a significant risk of getting beaten over the top.

The Panthers have played more man coverage this season than in previous years, but given the matchups against the Saints receivers and the formations which they run a lot of their plays out of, resorting back to a majority zone defense looks to be a sensible step for this week. A major advantage of zone defenses is how it forces the quarterback to hold onto the ball allowing for a better pass rush; with that in mind, the biggest improvement the Panthers’ pass defense needs to make is getting pressure on a more consistent basis.

On both of the previous plays, the Panthers bring five blitzers, a common theme when they look to bring pressure, yet are unable to get to Brees. If the Panthers are able to stuff the run on early downs, they need to be able to get off the field once they get the Saints into these long third downs. A lot of this comes down to individuals winning their matchups, so strong performances from the likes of Mario Addison and Kawann Short would be immensely useful on Sunday.

The Saints have turned into one of the NFL’s better pass defenses this year, largely aided by rookie corner Marshon Lattimore; where the Saints have struggled is against the run. The Saints are allowing 4.6 yards per carry; good for 29th in the NFL. The key for the Panthers this game will be to get ahead of the chains on a consistent basis and avoid having to throw the ball deep on third downs.

When they do look to pass, the Panthers need to avoid using McCaffrey in pass protection, as they did on one spectacularly dire drive against the Jets; his matchup against the linebackers is probably the Panthers best option in the passing game, so they must look to exploit it. By spreading the Saints out, the Panthers will also make it hard for the Saints to stuff the box to stop the run without opening themselves up to jet sweeps and screens.

While this isn’t a hugely complex offensive strategy, it speaks to what went wrong for the Panthers last time against the Saints: trying to do too much. If the Panthers can run the ball downhill, then they have a chance to move the chains consistently and counter that with the short passing game; effectively beating the Saints at their own game.

-All video clips courtesy of NFL.com