How To Score A 76-Yard Touchdown The Hard Way 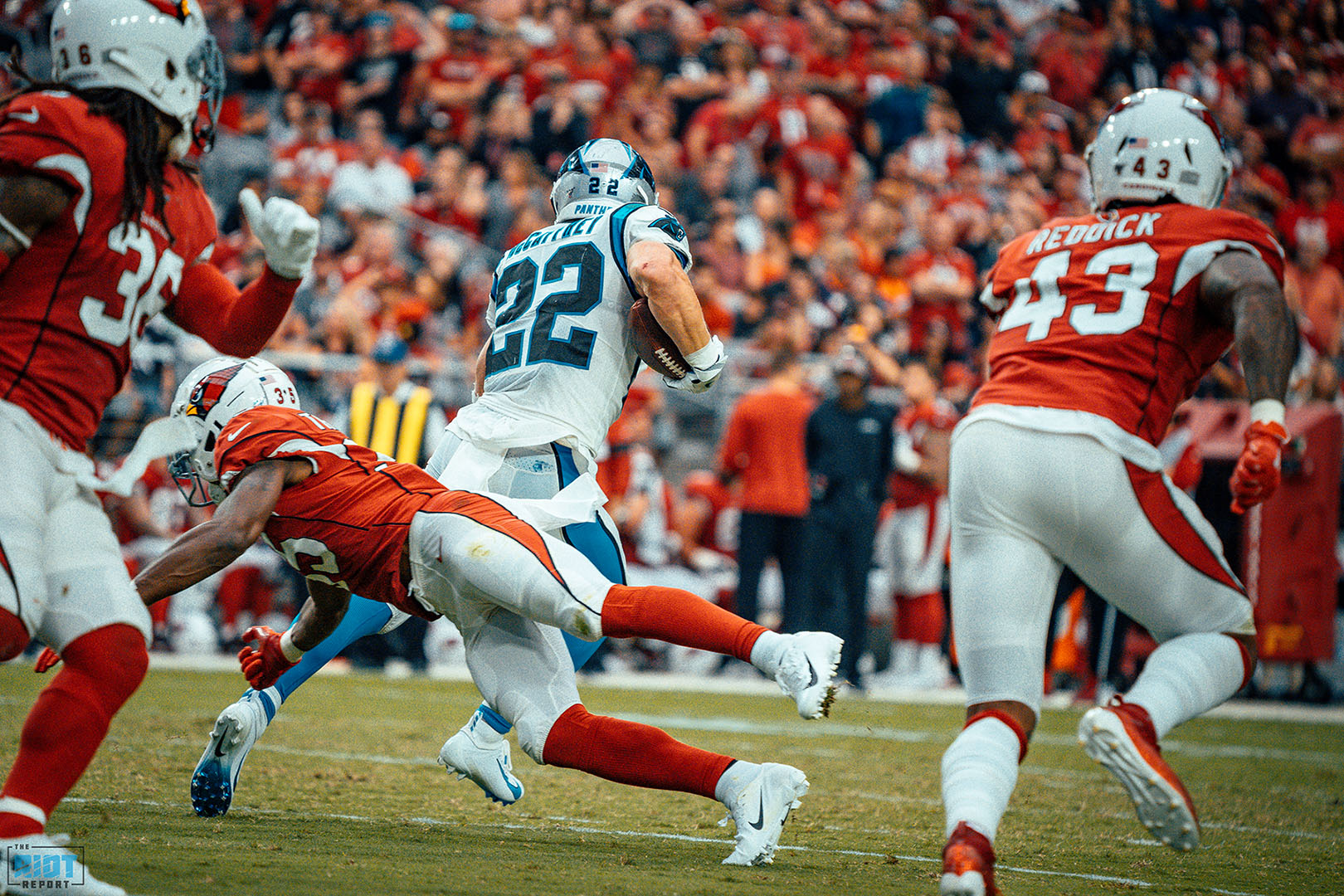 Getting By With A Little Help From My Friends

So to this point, the Panthers are largely the ones who are in control, the Cardinals could have reacted a bit faster to the pulling guards, but they should still be able to stop this play before it reaches the end zone. So what changed? Well, lets run the play a few frames:

Olsen and Van Roten both have plenty of space to get through the hole along with McCaffrey and Manhertz is making a really nice block on the second level. However, this is where things really start to go wrong for the Cardinals, and in particular for Baker and DJ Swearinger (36). For Swearinger, he needs to recognize that the edge defender has got the outside gap and that he should be diving between Armah and Van Roten in order to force Olsen to block him, which will guide McCaffrey back inside – where the Cardinals have help coming. He doesn’t do this, seemingly caught between trying to dive the gap and holding outside in case McCaffrey bounces the run there.

However, by far the bigger and more puzzling mistake was made by Baker. He has either completely lost track of what is going on or he really doesn’t fancy making a tackle – rather than shooting across with the pulling Olsen to make the tackle, he appears to be looking to break right where there is no chance of the ballcarrier being. This is where the Cardinals really lost a chance to keep this play to a respectable gain, as they have no not just lost their leverage on the play as they had at the start but they have now handed the numbers advantage back to the Panthers.

This can be seen really clearly on the next image:

Here, you can see how close the two players mentioned earlier get to tackling McCaffrey for minimal gain, but you can also see how Van Roten was able to pull effectively to make his block on the linebacker while Manhertz was able to secure his block on the weakside linebacker. You can also see how the cornerback on the strong side has stayed really wide and remains flat-footed, allowing Olsen to be able to focus on sealing off the back side of the play. Similarly, you can also see how Baker is trying to take on a receiver trying to block him rather than going anywhere near the ballcarrier.

This all leads to the following situation:

Here, you can see how trying to take on DJ Moore has meant that Baker is late enough to pursue to the ball that Greg Olsen is able to secure the block to seal the pursuit while the strong-side cornerback is left in no man’s land. Additionally, you can see how Manhertz has made sure that when his defender was able to work laterally around him, rather than trying to drive him backwards and allowing his defender to two-gap, he looks to drive him clearly to one side, making it much easier for McCaffrey to read, and coincidentally sealing the cornerback off from the pursuit.

This is the point where the Panthers know they should get a big play. However, what leads to the long score is all McCaffrey. He makes the man miss in the hole and so gives himself a straight race with Byron Murphy, Jr to the end zone:

To the point where McCaffrey gets to the safety, he has done a good job of reading how the blocks have evolved and shows the burst to get through the gap before the hole collapsed, but it is with the nice juke move that he earns his paycheck, and with the run to the goalline that he deserves a bonus. This isn’t a linebacker or even a safety that he runs away from, but a cornerback, and there really aren’t many running backs that can do that:

Christian McCaffrey really is very good at this football business.

This is an effective play design to run the ball against a defensive front that is designed to stop the run. They got an awful lot of help from the Cardinals’ defenders to make this a touchdown, but unless the defense had known exactly what was coming pre-snap, this play was always likely to put the Panthers into plus territory, and when you can do that against a loaded box, that’s really something.