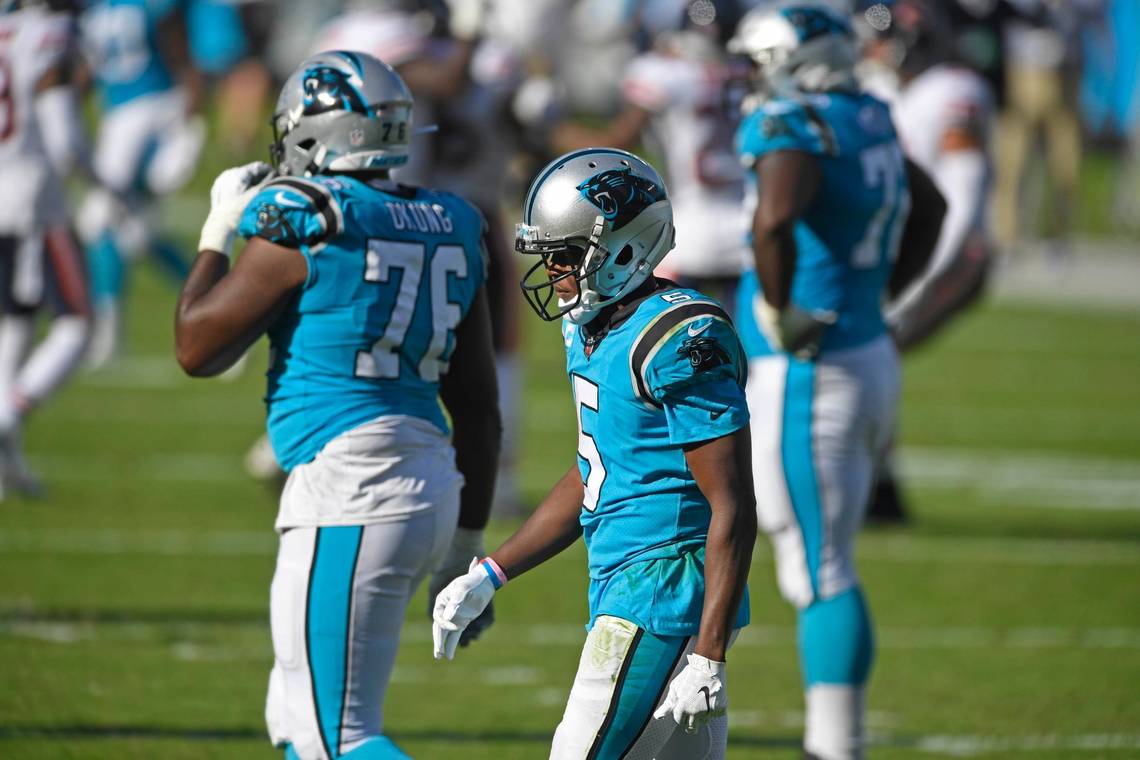 Today, while the memory is still fresh, there’s a lot to be frustrated about.

There are the final two throws of the Panthers’ 23-16 loss to the Chicago Bears at Bank of America Stadium – the first of which was an overthrow from a quarterback lauded for his accuracy who entered the game leading the NFL in completion percentage. The second was an ill-advised interception forced by Bears defensive end Robert Quinn as he collapsed the pocket and prevented Teddy Bridgewater from stepping into his throw over the middle to DJ Moore.

Even more frustrating when you consider an offensive line that hadn’t allowed a sack in two games and was bullied by the best defense they’d faced all season on Sunday, to the tune of four sacks and six QB hits; the Bears consistently forced Bridgewater into breaking the pocket and scrambling eight times for 48 yards, both career highs. After Matt Rhule said all week that the Panthers’ red zone and third down offense were going to be keys to their victory, Carolina went 3-of-13 on third down and twice settled for field goals after drives of more than 13 plays – both of those drives ended less than four yards from the end zone.

Or a coaching staff that prides itself on discipline watching their team commit eight penalties for 69 yards, their third time in six games they’ve had eight or more infractions. The Panthers had nine quarterback hits, but could muster zero sacks and they are tied with the Jacksonville Jaguars for the fewest in the league after six weeks. Don’t forget the three turnovers. These are all things that will likely keep Matt Rhule – and fans – up late tonight and will have talk radio buzzing Monday morning about an inconsistent, frustrating performance on Sunday.

But here’s the thing – as frustrating as some aspects of Sunday were, the reality is that the Panthers aren’t on a short timeline. If you zoom out a bit, bad Sundays now can lead to Victory Mondays in the future. 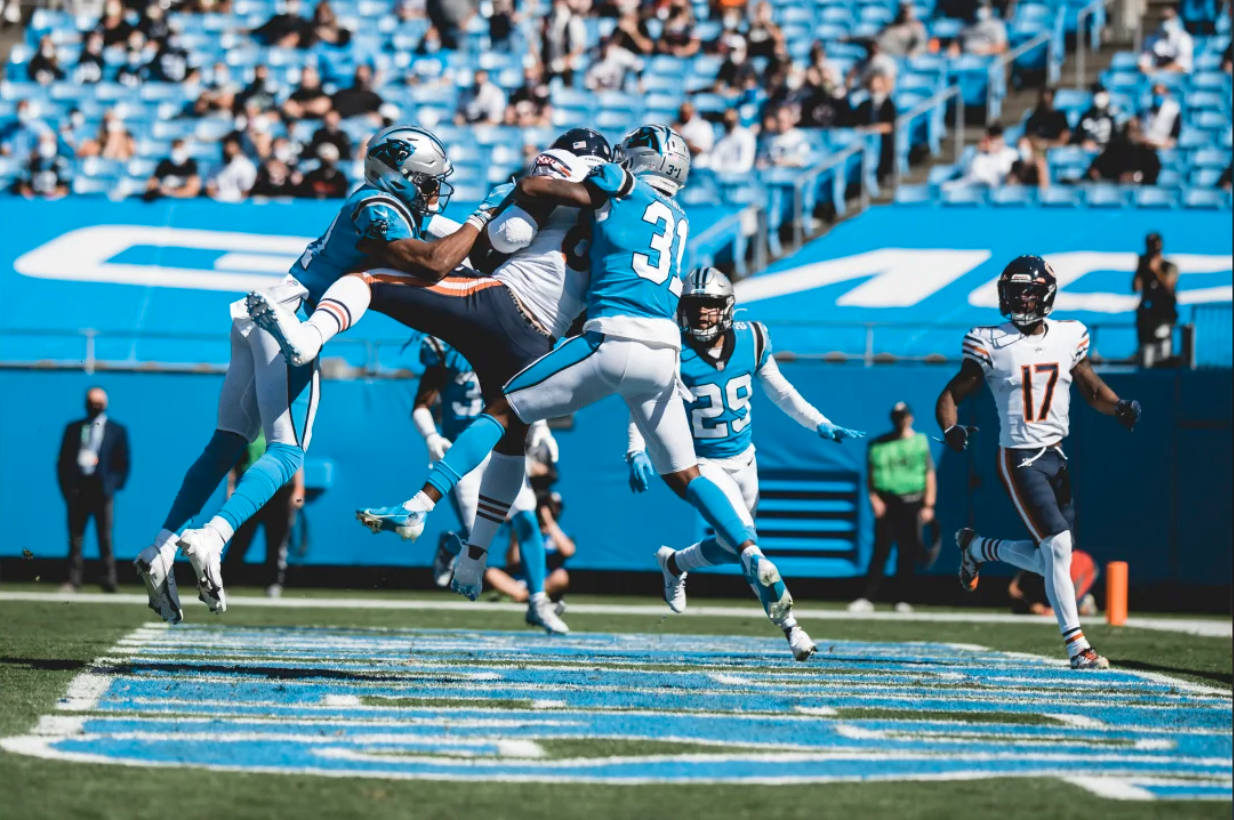 The Panthers weren’t expected to compete for a playoff spot in Rhule’s first season – in fact, many thought they were more likely to be in the conversation for the first pick in the 2021 draft. The past three weeks proved that they’re closer to the former than the latter, but there are lessons to be learned in winning just as there is in losing. Lessons to be learned about handling early-season big games and winning streaks. Lessons to be learned when the national spotlight starts shining on your team and ‘Good Morning, Football’ is extolling your virtues on NFL Network.

“When you win three games in a row, you kind of lose the process a little bit,” said rookie Jeremy Chinn, who had the first interception of his career and leads all rookies in tackles. “It’s just coming down to what got us here, just 1-0. Playing with that hunger just to win one game at a time. Like I said, we may be worried about a streak or may be worried about winning four games instead of just winning one game this week.

“We’ve just got to get back to that mentality.”

Chinn’s early success has been a bright spot on a team that is full of them if you’re willing to pull back from Sunday’s disappointing loss – a loss the Panthers still had a chance to win in the fourth quarter, which has been the case in all three of their defeats. A bird’s eye view reveals not only impressive performances like Robby Anderson currently leading the NFL in receiving yards and Derrick Brown sitting fifth in the NFL in tackles for loss, but players stepping into leadership roles on a team just learning to play like one and young players proving that they belong in the NFL.

The Panthers knew they were going to have to turn to young players on defense, but Brown, Chinn and Troy Pride have exceeded even the highest of expectations – Pride drew the start over a banged-up Donte Jackson opposite Rasul Douglas and when Juston Burris exited in the second half with what looked like it will turn out to be a serious rib injury, undrafted free agent Sam Franklin filled in admirably.

“I saw a bunch of young guys out there playing and I think they [held] their own when they go out there,” said Rhule.

And rather than the offense having to make up for the defense, the defense appeared to be the better of the two units as Joe Brady’s group failed to score a touchdown on nine of their ten drives, with rookies leading the way on a depleted defense that was ultimately unsatisfied with it’s performance despite holding the Bears to 2.52 yards per carry.

“I don’t view them as rookies,” said Brian Burns, who had three QB hits of his own. “I just see them as part of the team. At some point, that rookie stuff just has to go. They’ve got to come do their job just like anybody else. We expect the same out of a vet that we expect out of [the rookies] – it’s the same, to me… I just feel like we’ve got to be more disciplined from the standpoint of penalties. I feel like that killed us today and that was not our best ball, period.”

“That was not our best ball.” 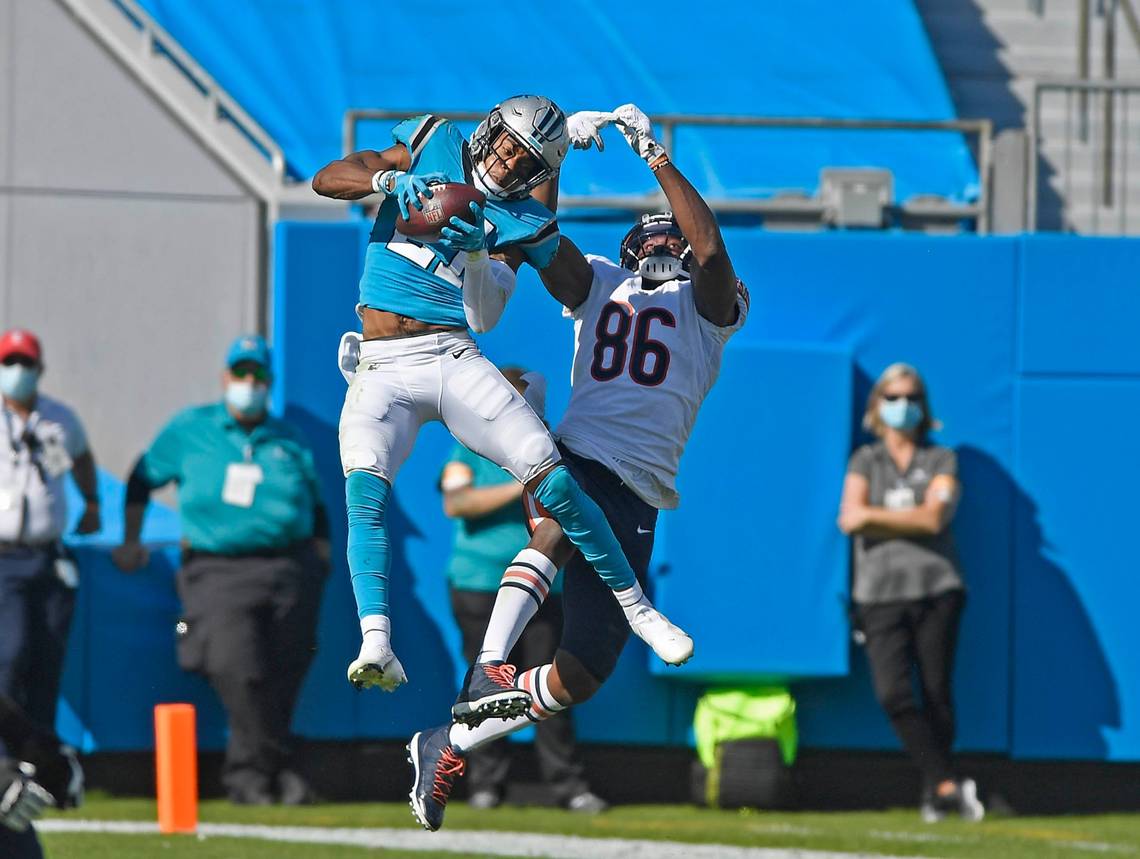 While a team is ultimately judged on their win-loss record – and make no mistake, losses are not taken lightly in Carolina – a season in which the Panthers have a brand new coaching staff, missed out on most of their offseason and flipped over 60% of their roster can be evaluated with different objectives in mind. Are they growing week to week? Are they competing? Can the young players contribute for the foreseeable future?

There’s no shame in losing to a 5-1 Bears team that seems headed for a playoff berth behind Khalil Mack and their stingy defense, but it’s the lessons learned from both their losses – and their victories – that will prove most valuable for the Panthers in the future.

“Moving forward, like I said, like I’ll keep saying, today was a learning experience for a lot of guys,” said Teddy Bridgewater, who said the team was ‘knocked off course’ from the opening kickoff by the Bears. “This game will humble you and I’m pretty sure it humbled a lot of people today.”

When asked to expand on what it meant to be humbled by football, left tackle Russell Okung – one of only three players on the roster over 30 years old – had a thoughtful response.

“I think football is a lot like life,” added Russell Okung. “Sometimes you want things to go your way and you really believe it will be as such; and it just doesn’t shape up the way you hoped. And then you have to go back to the drawing board to figure things out… in this analogy, [you have to] check your play or your attention to detail, focus on the things that are being required of you and come back with a better effort.”

“When I point at humility, I’m pointing at a willingness for players to take an individual responsibility for the collective. I think we have that on our team.”

“You have to be willing to say, ‘it didn’t happen the way we hoped, but it can be better – we still have a ton of time and let’s allow ourselves to feel this, take it as a learning experience and then move forward.'”

If that’s what ultimately can come out of this, then an October notch in the loss column won’t seem quite so frustrating. Next week, it will not get any easier as this iteration of the Panthers faces Drew Brees and the Saints for the first time – what lessons can they learn in New Orleans?