“It Was Lit, Man” The Color Rush, Twist and Pick Sixes That Defined Thanksgiving in 2015 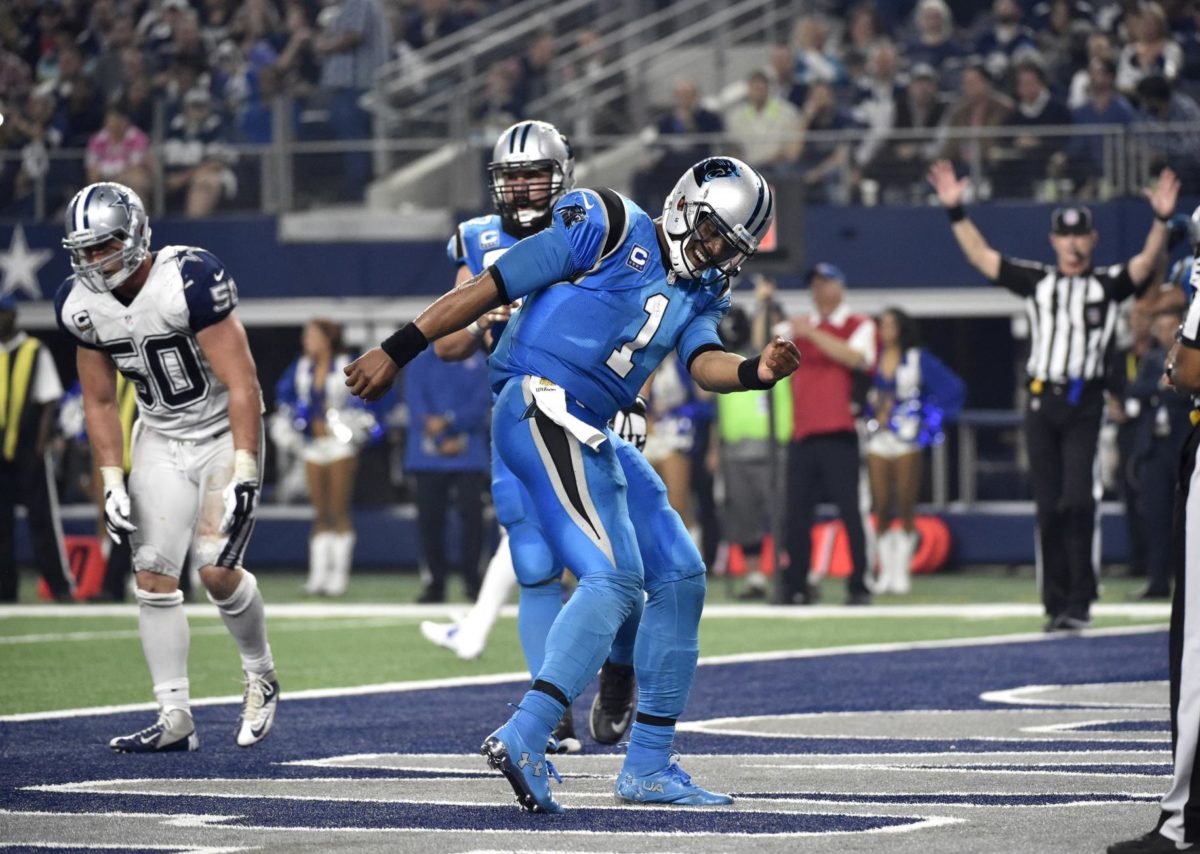 At 5-6, with five starters on injured reserve and questions swirling around the future of numerous faces that have been a huge part of the franchise for nearly the entire decade, the Panthers 2019 season has certainly not gone the way they or fans had hoped as Thanksgiving week rolls around.

But four years ago, Thanksgiving week brought one of the most memorable games in Panthers history as a 10-0 Panthers team waltzed into AT&T Stadium in Arlington, Texas and announced to the world that they had arrived, intercepting Tony Romo three times and returning two of them for touchdowns while Cam Newton did the twist in the end zone as the Panthers blew out the Cowboys 33-14.

Some players’ favorite memory of the game involved not the win, not the fact that they put a beating on the iconic Dallas Cowboys or had their fans chanting ‘Keep Pounding’ in Dallas by the end of the game because they had been up for four scores for most of the second half.

Not Cam abandoning the dab in favor of the Twist and the Swim, the 11-0 start or even the first career touchdowns of Luke Kuechly and Kurt Coleman.

It was those all blue uniforms.

“It was lit, man,” remembered Mario Addison, who strokes his beard happily at the thought of the Color Rush kit. “I want to say that was our first game ever doing the color rush and dressed in the all blue. Everybody was looking good from head to toe. We came out and we dominated that game – we put a good little beating on ’em.”

The Panthers were one of eight teams to unveil new Nike Color Rush uniforms in 2015, which were designed by Nike, who had replaced Reebok as the league’s uniform supplier in 2012; the jerseys were meant to incorporate unique club aspects by showcasing the vibrant culture and fan base through color.

When I play Madden, that’s what I play in, for what it’s worth,” Cam Newton said of the all-blue uniforms in 2016. 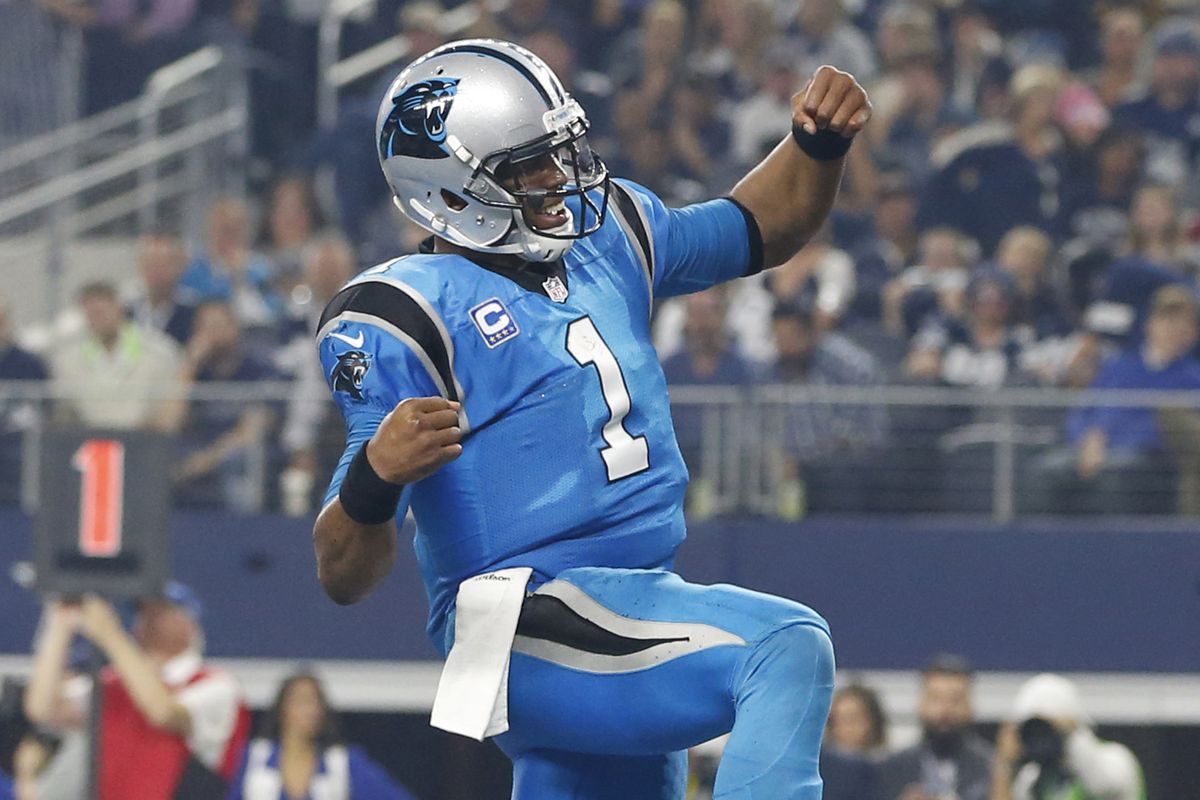 With quarterback Tony Romo returning for the first time in seven weeks after suffering a broken collarbone – the Cowboys started 2-1 but lost six of their next seven with Romo out – the Cowboys were slight favorites entering the contest despite being a 3-7 team facing an undefeated Panthers squad – perhaps it was the lore of playing on Thanksgiving in Dallas, something Ron Rivera calls an honor.

“It was really a neat experience; when you get a chance to play on Thursday, Thanksgiving, in either Detroit or Dallas, I think that’s really a cool thing,” said Rivera, who played in Detroit as a linebacker with the Bears multiple times but never played a home game on Turkey Day. “Especially against Dallas in Dallas. It’s one of the hallmark teams when it comes to Thanksgiving.”

“I always thought that was cool.”

While Rivera’s wife Stephanie organized a full Thanksgiving dinner the night before the game for the coaches, players and families that had traveled, it was safety Kurt Coleman’s weaving interception return for a touchdown on the first possession of the game – the second week in a row the veteran safety had ended the opponent’s first possession with a turnover – that set the table for a full meal on defense for the Panthers.

And if Coleman’s interception put the cornucopia in the middle of the table, it was Kuechly that brought the turkey, ham, stuffing and everything else as his back-to-back interceptions in the second quarter – the first player in almost two decades to pick off two attempts in a row – put the Panthers up 23-3 at halftime. Kuechly darted away from Jason Witten and broke in front of Terrance Williams, sprinting untouched into the end zone, adding a stiff arm to Tony Romo as he crossed the goalline for good measure on the first one.

On Romo’s next attempt, Kuechly would track Witten down the seam and leap for another interception, returning this one into Cowboys territory.

In the second half, Thomas Davis would sack Tony Romo – that sack would be the final time Romo would be sacked in his 13-year career.

“Thomas got him and I was just in there adding my own two little cents and when he got up, he was holding his collarbone like, “ah!”, said Addison, who was right behind Davis in the backfield. “You don’t ever want anybody to get hurt, especially not on Thanksgiving – that part sucked.” 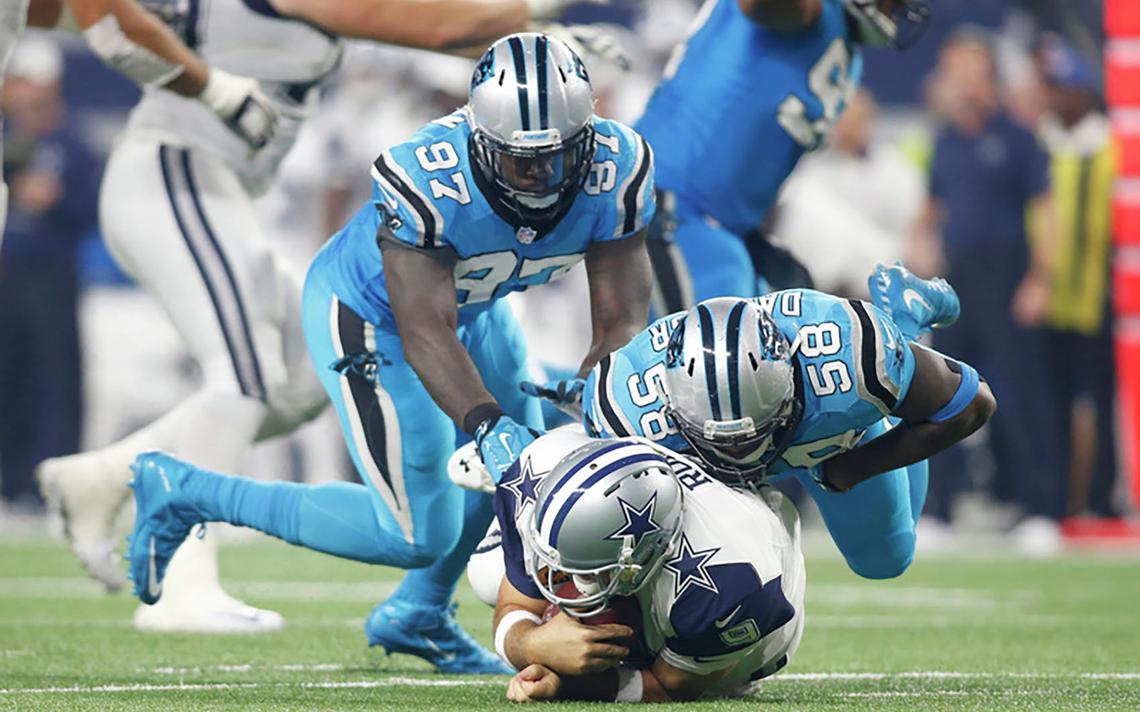 The 33-14 victory over the Cowboys has been the only time that the Panthers have played on Thanksgiving – and it’s an honor that many players in the league have never felt, including new Panthers defensive tackle Gerald McCoy, who, despite being a six-time Pro Bowler, hasn’t seen the national spotlight very often.

“I’ve always wanted to. It’s just like the NBA playing games on Christmas, I think that’s cool to just [be able] to do it,” said McCoy. “There’s things that you dream about as a kid or that you see that you always want to do.”

But he certainly remembers that game in 2015.

Everyone remembers the uniforms.