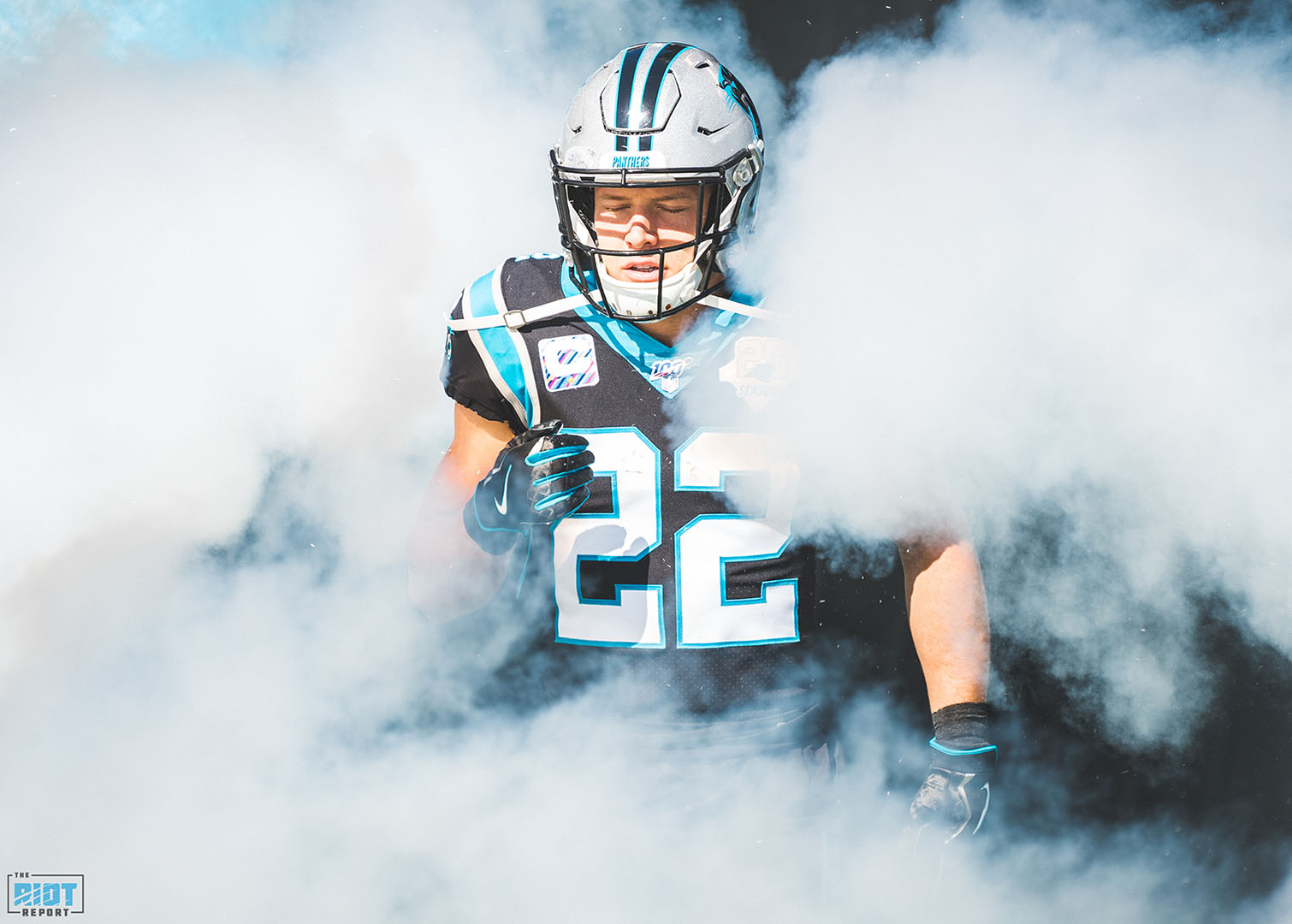 Since 2011, Cam Newton had been the final offensive starter announced out of the tunnel at Bank of America Stadium.

As his name was called, the familiar #1 would slowly emerge from the smoke, nodding appreciatively at the crowd before deploying his signature Superman celebration and his 10,000-megawatt smile, giving a primal scream with his hand pointed to the sky.

That running back also did his postgame media availability at the podium instead of at his locker; again, that was Newton’s role for eight seasons – the last word at the last press conference, almost always the player who was heaped with either praise or blame, depending on whether the Panthers had won or lost that day.

Sunday in Green Bay, after his team came up a half-yard short for the second time this season, Christian McCaffrey took up another of Newton’s roles – sitting, inconsolable, at his locker with his head in his hands as teammates silently dressed around him.

“I didn’t get in,” said McCaffrey simply as reporters pressed around him. “You’ve got to get in in those situations – we gave ourselves a shot and didn’t get it.” 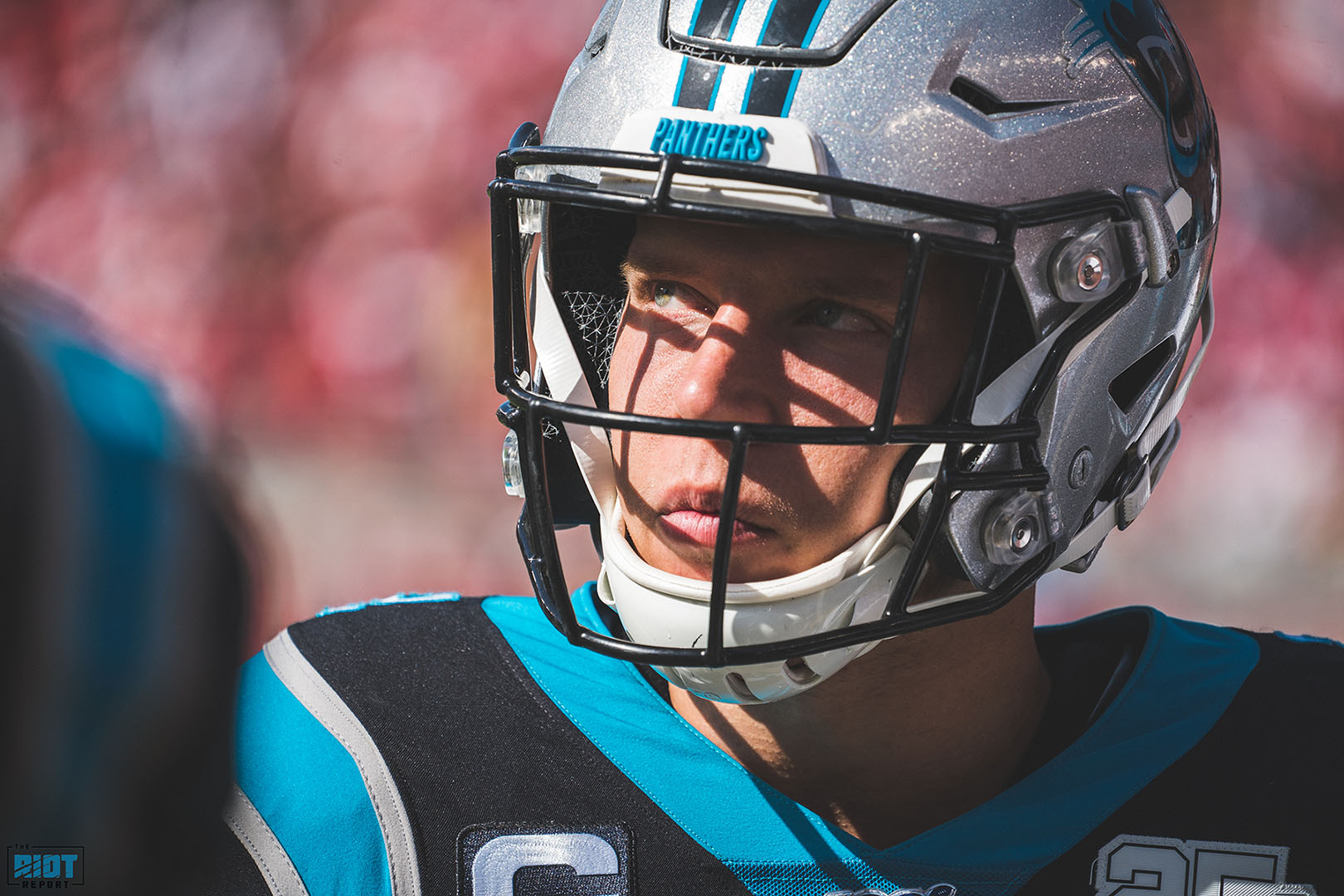 In Week 2, when the Panthers needed one yard against the Tampa Bay Buccaneers with time running out in the fourth quarter, questions swirled when the playcall put the ball in McCaffrey’s hands instead of Newton’s.

Fast forward eight weeks and when the Panthers needed two yards in Green Bay and had time for only one play, there was no question. You put the ball in your best player’s hands – and that’s exactly what the Panthers did.

“There were four seconds left. It’s the last play of the game,” said Packers coach Matt LaFleur. “I said something to [defensive coordinator Mike Pettine], ‘they are going to pick their best football play.’ So that did not surprise me.”

The RPO didn’t go as planned: Kyle Allen had the option to throw, but made the correct decision, stuffing it into McCaffrey’s belly – the hole that was open for a second closed as Greg Van Roten missed his block and allowed linebacker Kyler Fackrell to hit the Panthers MVP candidate in the backfield – the left guard attempted unsuccessfully to sling McCaffrey over the goalline, and the game was lost.

“It would have been a lot easier if I had just blocked my guy in the first place,” said Van Roten. “Christian could have walked in.”

McCaffrey leads the league in yards from scrimmage despite playing a game less than most of his contemporaries on the leaderboard, his 14 total touchdowns are tied for most in the league and he’s gone over 100 yards rushing six times this season, including in Green Bay as he rushed for 108 yards on 20 carries. But individual statistics – even those as eye-popping as McCaffrey’s have been this season – don’t matter when your team is losing and the Panthers have lost two of their past three; the MVP chants that thundered in Charlotte and sprinkled at Lambeau don’t make an impact if you’re out of the playoff picture.

McCaffrey’s ascension to the face of the franchise has been coming in drips and drabs for the past year – an NFL100 commercial featuring legends of the sport and the biggest players in the league featured a prominent moment for the running back with Newton nowhere to be found. While there are still scores of #1 jerseys at Panthers games around the country, the number of 22’s is growing exponentially by the week – with every spin move and 50+ yard touchdown run (he has three on the season and no other player has more than one), his legend grows.

With the decision to put Newton on injured reserve last week, the team will lean on McCaffrey even more than they did last season when he set the franchise record for yard from scrimmage in 2018 – with 11 more yards on the ground, he’ll become the team’s first player with consecutive 1,000-yard seasons since 2009 and is currently on pace to surpass Deangelo Williams’ franchise record for rushing yards in a single season. Last year, he had the highest workload of any running back with over 91% of the team’s offensive snaps – this year, he’s been on the field for 93%. 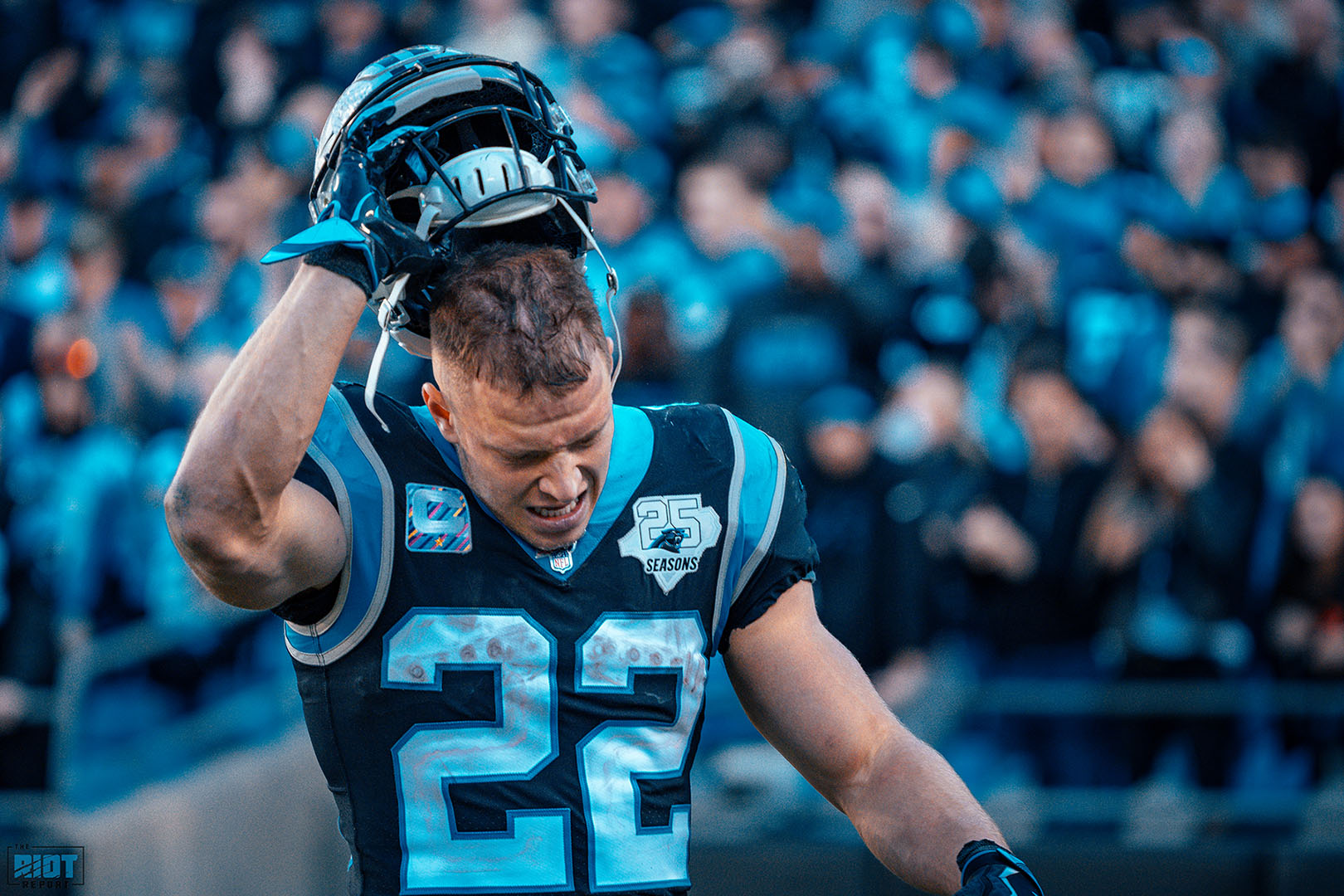 Not voted a captain at the beginning of the season, McCaffrey has worn the C on his chest since Week 5 of the season.

“My definition of being a leader starts with action – if you’re not acting on it and you’re not showing it firsthand, then I don’t think the words really matter,” said guard and fellow captain Trai Turner. “After you start to act on it, people start to hear what you have to say a little bit more.”

“He’s the same guy. He came in a leader, a tough worker [and] a hard runner. His intangibles just get better and better.”

No matter the other weapons on the offense that surrounds Kyle Allen as he navigates his first season as a starter – Greg Olsen just became the fifth tight end in NFL history with 700 catches, D.J. Moore has had two consecutive 100-yard games and Curtis Samuel has scored four touchdowns in his past four games – it is McCaffrey that drives the offense.

The Panthers running back is one of only four players – Eric Dickerson, Priest Holmes and Emmitt Smith are the others – since 1950 to have over 1,350 yards from scrimmage and 14 total touchdowns in his first nine games of the season; the running back has either carried the ball or been targeted on over 40% of the team’s plays this season thus far and has either 100 yards from scrimmage or a touchdown in every game but one this season. 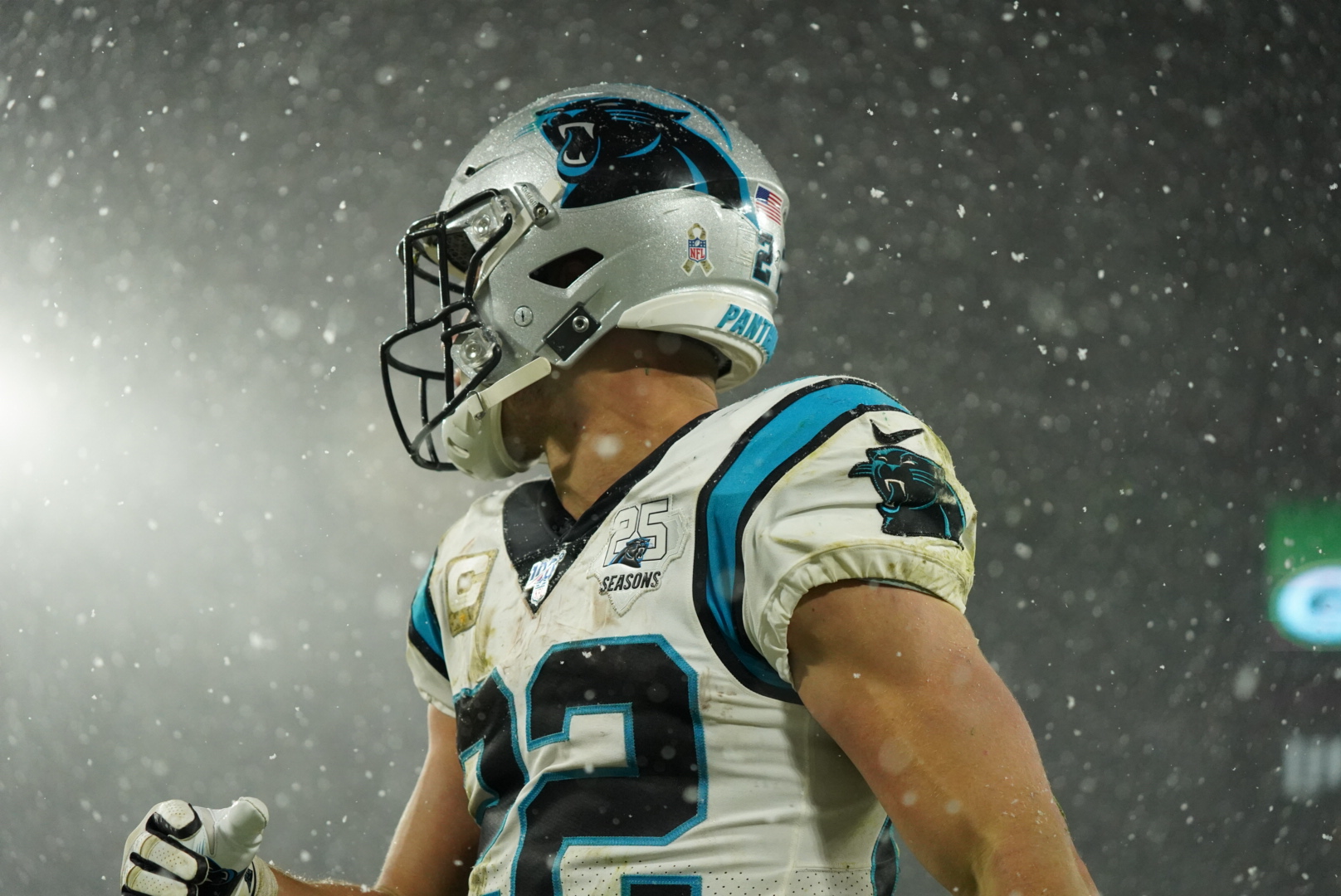 With the future of another face of the Panthers’ franchise in doubt, McCaffrey’s is anything but – he’s one of the best running backs in the league, 23 years old and an MVP candidate in only his third season.

“When we can get Christian going in the run game and in the pass game, it’s huge for us,” said Allen. “I think Christian should very well be in the MVP conversation and I think he is.”

“If he still keeps playing the way he’s playing, I don’t think he’s got to worry about much.”

As McCaffrey goes, so go the Panthers; whether or not Newton returns next season, 2019 – and the future face of the franchise – belongs to their star running back.