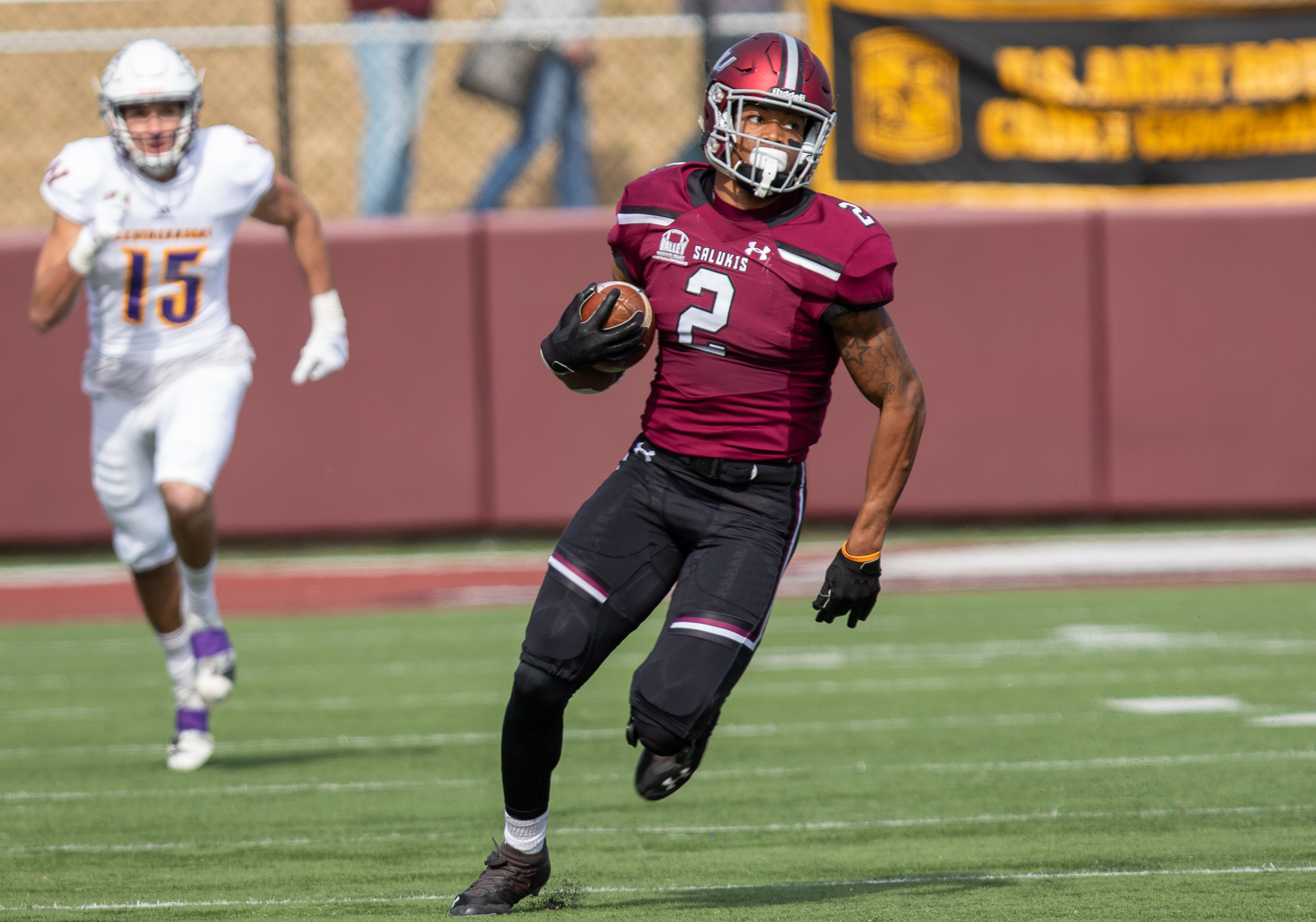 The newest Panther (for the next 12 hours or so, anyway) is Southern Illinois defensive back Jeremy Chinn, for whom they traded the 69th and 148th overall picks to move up five spots to the 64th slot to select. Chinn is a versatile defender, who played all over the place for Southern Illinois in a way not dissimilar to Isaiah Simmons at Clemson – and he should give the Panthers an excellent matchup piece if he is able to fulfill his potential at the NFL level.
However, while that is all good in theory, what does the tape tell us about the player he is right now, and how he needs to develop to reach that ceiling?

And it is clear watching Chinn on tape that he is just on a different level than those around him from an athleticism perspective (He wears #2 and is the one making all the plays):

And it is what this athleticism could allow him to do in coverage that had him so high on the Panthers’ draft board, who felt like they couldn’t wait even six more picks on the off chance that Chinn wouldn’t be there. In this regard, he shows good movement skills with tight footwork, allowing him to smoothly mirror receivers in man coverage:

While his quickness allows him to close ground on the back end with the ball skills to make an impact at the catch point:

Because of his level of competition, it’s quite hard to make hugely strong statements about his technique in coverage – he was often just way more athletic than the people he was going up against, and he wasn’t asked to play a huge amount of deep zone as Southern Illinois looked to maximize his impact around the ball. However, there are a couple of areas of concern with his coverage that I think are worth highlighting – the Panthers will need to be confident these are things they can work on with a good chance of improving.

The first of these is his footwork at the head of routes – while on the following play, this is likely exacerbated by the fact that he is dropping down from deep coverage to cover underneath, he needs to do a better job at times of keeping his feet moving and not committing his weight one way or the other:

The slightly more troubling aspect is his awareness in zone, as while he generally made good decisions in coverage, he sometimes was just a step slow in his reading of the game:

And, at times, he looked caught between two minds between the route in front of him and the route behind:

Don’t mistake these quibbles for anything more than that, though.

Chinn’s upside in coverage is immense – he shows flashes of the ability to play man-to-man in the slot as well as being able to play the deep middle in zone. While he does show some nice things from a technical point of view and his small school background goes a ways to explaining why he isn’t a fully polished coverage player at this point, his coverage is something that is going to need continued development when he gets to the NFL in order to get close to his ceiling.

It is also worth pointing out that, like with Isaiah Simmons, the fact that he was asked to move around the field a fair amount and the limited time colleges have to practice, he has probably taken fewer reps at each of the different roles than somebody who has played them on a full-time basis, and it would be foolish to think that this hasn’t affected his development to this point.

Oh, and if you were looking for the upside in zone coverage, yes, he does have the ball skills to generate turnovers on the back end:

Additionally, as a defender against the pass, while he isn’t going to be rushing the passer on a regular basis in the NFL, he does show the ability to also add some value on a delayed blitz from time to time:

Of course, playing safety/big slot is about a lot more than just coverage, and while this is the basis for his upside, he also needs to be able to hold his own against the run, especially if he is going to play in and around the box at times. So how does he get on in this regard?