Job Number One For Week 10: Contain Aaron Rodgers (As Much As Possible) 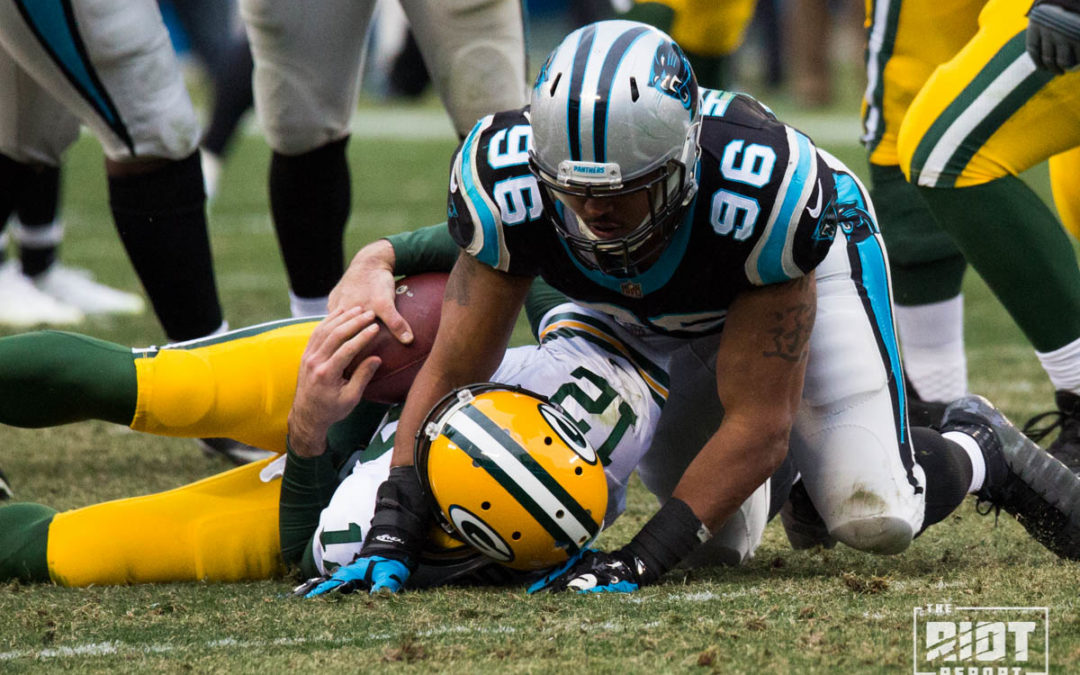 The week has come.

For the third time in five years, the Panthers must face Aaron Rodgers and the Packers, and this time they’re on the road against one of the league’s most threatening teams. The Panthers won the previous two matchups against Green Bay, but this year’s version of the cheeseheads is a little different. With an improved defense and a healthier Rodgers, the team has surged to a 7-2 start, once again taking control of the NFC North.

Not much needs to be said about Rodgers, but I’ll say it anyway. The future Hall of Famer has put together another strong year (2,485 yards, 17 touchdowns, only two interceptions in nine games), putting himself in the mix of MVP candidates and looking better than he did in an injury-riddled 2018 season.

This is one of the toughest quarterbacks to shut down, but somehow the Chargers were able to do it last week, limiting Rodgers to well under 200 yards passing. But before we get there, we must illustrate what makes this quarterback so great – in case you needed a reminder.

When dealing with a quarterback like Rodgers, one must recognize that you can barely count on one hand the amount of quarterbacks as talented as him. Beating a team led by this kind of quarterback doesn’t come down to taking away one area he succeeds in; it comes down to playing as nearly flawless as you can against a multitude of his strengths.

Rodgers, of course, has the accuracy and smarts to play as a traditional pocket passer, but as the play below will show, he is so much more than a quarterback with a garden variety skillset.

Similar to how Cam Newton would make plays very few quarterbacks could make, Rodgers is in the same realm. This cannot be coached, but rather learned through extensive practice and metaphysical skill that essentially transcends the QB position. In other words, this throw is art.

Let us watch one last play of artistic merit below, this time against the Cowboys.

Rodgers’ contortion of his body allows him to make throws many quarterbacks physically cannot attempt. A few analysts over the years have criticized his footwork for being “a little sloppy” but I personally think it should be chalked up to him finding all sorts of angles and windows to throw the ball through.

The combination of a laser arm and beautiful mobility have guaranteed the Packers many winning seasons alone, so you may be wondering: Does Rodgers have a focal weakness the Panthers can exploit? Well – not exactly. Granted, that doesn’t mean the defense can’t force a few turnovers out of him, but his ability to take care of the ball while maintaining an aggressive style of play is nearly impossible to defend.

Fortunately for Carolina, the Chargers defense offered a glimpse into how to do that.

Through Week 9, the Packers offense has allowed the 10th most quarterback hits (51), tying with the Chargers themselves (not counting Thursday night’s beatdown where LAC gave up 10 QB hits). In a bizarre occurrence, the Packers offense was slaughtered as the Chargers won 26-11 – thanks to a pass rush consisting of Joey Bosa and Melvin Ingram, two of the best edge rushers in football.

Beating the Packers offense requires a combination of instant pressure and high quality coverage. This is both obvious and easier said than done, especially with a mobile quarterback like Rodgers. But as these two plays from the Chargers defense show, it can be done.

It’s a matter of getting to Rodgers quickly in order to have any chance at stopping him, and that’s exactly what Ingram does on this sack.

The Panthers don’t have pass rushers quite as talented as Bosa or Ingram, but even so, guys like Brian Burns and Gerald McCoy have more than proven their worth this season, and this is a game where they desperately need to be at an A+ level to overwhelm Rodgers.

One other key ingredient in the Packers passing game is running back Aaron Jones. Though not the most valuable skill player on the Packers offense, Jones has been the seventh-most targeted receiving back in 2019, according to Fantasy Pros, with 46 targets. The Panthers defense has also been futile against the run, so a big game from Jones might be on the horizon.

Jones has good vision and athleticism, and the scheme head coach Matt LaFleur runs has constantly put Jones in favorable positions in the passing game. Against the Chargers, however, Jones was limited to one catch on three targets for -1 yards. Below is that play – a screen to the right.

The speed of the Chargers defense (or at least in this game) proved to be too much for Rodgers and Jones, and that’s a similar amount of speed the Panthers have in Luke Kuechly and Shaq Thompson. Hanging with Rodgers, as aforementioned, will be a supremely difficult task in of itself, but so will the need to stay on the short passing game, primarily with Jones.

Getting back to Rodgers, seeing him crack is rare and he’s not a quarterback that plays poorly under pressure or when forced to hold onto the football. But staying consistent and shutting down his receiving options will obviously give the Panthers defense a better shot of winning.

This is extremely well played by the Chargers defense. As with previous seasons and like almost every team today, the Packers offense runs 11 personnel packages frequently (one tight end, one running back, three wide receivers), though not as frequently as seasons past. In fact, according to SharpFootballStats, the Panthers run 11 personnel slightly more than the Packers do (74% of Carolina’s snaps as opposed to 73% of Green Bay’s).

The Chargers cover the trips formation at the bottom of the screen perfectly, as well as the sole receiver running vertically. Not an ounce of room is allowed outside the numbers, and Aaron Jones (top left) is allowed zero breathing space with the edge rusher bumping into him and the linebacker assigned to him getting there in a flash.

The hesitation Rodgers shows holding onto the ball isn’t shown often, though there have been a couple of cases like this. This throw could’ve been delivered more accurately, but it’s a little wide of Davante Adams. The speed and coverage smarts the Chargers showed here limit Rodgers’ options and contain him.

Because of his versatile skill set, it’s a tall task to contain Aaron Rodgers. Much like playing the dynasty version of the Golden State Warriors or the Patriots, beating Rodgers means playing a consistent, near flawless game, holding him in check and constantly forcing him to make a play out of thin air. The Packers QB makes that difficult with how he’s able to contort his body and fit the ball into impossible windows; his footwork, combined with pocket patience and subtle movement inside have made him especially difficult to take down.

If healthy, the Panthers have the talent in the secondary to make things more challenging for Rodgers (for instance, he has a 40.2 passer rating against James Bradberry – though it should be noted that this game in 2017 was a time where Rodgers was nowhere close to 100% – this would be his last appearance of the season), but I have my concerns as to whether the pass rush can produce as strong of a game as the Chargers did, especially at Lambeau.

The Panthers offense has to deal with all sorts of problems on their own with a threatening Green bay defense – but limiting Rodgers’ reads and forcing him into difficult, nearly impossible throws, while brutal on paper, can be done. The amount of luck and skill Rodgers can force onto a defense as a playmaker has only made him more infuriating to play against; so make no mistake, this will be one of the more grueling tests the Panthers defense faces in 2019.

Oh, and do try to watch out for the hard counts.