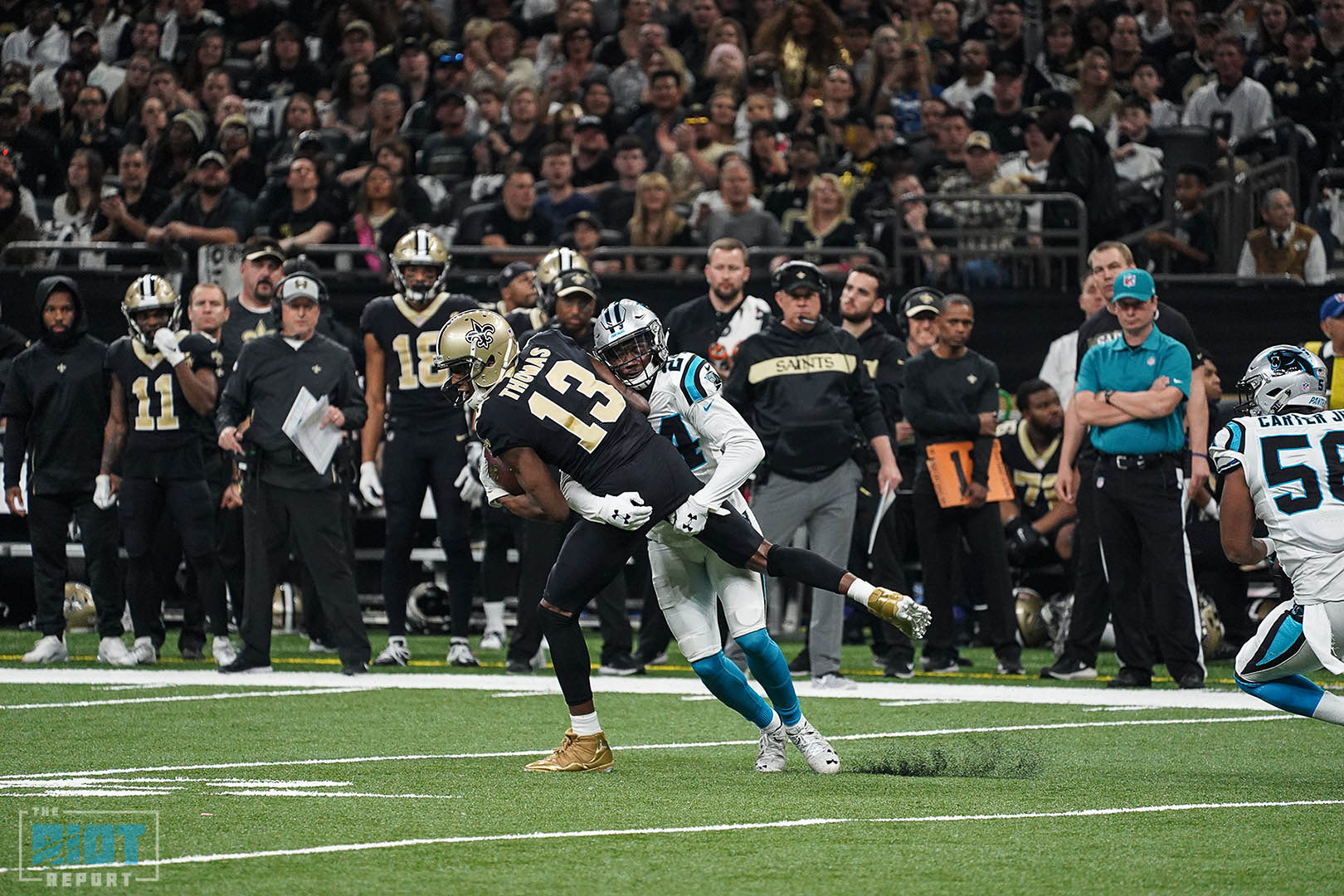 A wide receiver has never won MVP in the NFL’s 100-year history, but Saints receiver Michael Thomas has gotten some dark horse consideration in 2019.

Oddly enough, Thomas has never had a 100-yard game against the Panthers in his six career regular season games against them (in the 2017 Wild Card Round he had eight catches for 131 yards) – in 2018, the Panthers defense managed to hold him to just 78 yards on 12 catches in the two combined matchups. He’s had far greater success against the Falcons and Buccaneers, but the Panthers – and James Bradberry in particular – have kept him check to a degree (at least for his lofty standards).

That doesn’t take away that Thomas is Job Number One for the Panthers defense as they play at the Superdome on Sunday. His skill set and place in Sean Payton’s deadly pass attack allows him to consistently put up video game numbers that have rivaled fellow NFC South great Julio Jones.

With this in mind, let’s look at the target-heavy Thomas in this film breakdown.

Thomas has had many occasions where he’s been schemed open thanks to the route combinations in Payton’s offense, but make no mistake, he’s also been a talented route runner in his time in the NFL. This play shows the best of both worlds.

In this two receiver set, the receiver adjacent to Thomas helps clear a path for him toward the sideline with a simple deep corner route.

Thomas is afforded plenty of room to break out, helping Drew Brees out on this play.

It’s a good route from Thomas on a better play call from Payton, but Thomas’ approach at the catch point deserves a mention. He plants his left foot down as soon as he’s able to cradle the ball, helping him spin around and quickly move down the field to pick up some yards after the catch. Things like this can be taken for granted, but it’s a nice detail on the receiver’s part.

At first, you may think this is awful coverage from the Seahawks, but in full motion, it’ll make a lot more sense.

Thomas has some of the absolute best footwork in football. He loses zero traction on this slant route in spite of his furiously fast foot jabs, and that’s what gives him so much separation here. His shuffles are punishing in how ankle breaking they are – and of course, this catch moves the chains.

The little details have made Thomas among the NFL’s elite receivers in his first four seasons.

Here, Thomas is lined up in press coverage against Chidobe Awuzie, with Teddy Bridgewater throwing to him.

Engaging in tight hand-to-hand combat, Thomas manages to one up Awuzie…

…and gets leverage on the sideline.

It doesn’t hurt that Bridgewater is one of the best backup QBs in the league, so Thomas’ leverage gives him an ample opportunity to connect with Bridgewater on the back shoulder toss, which they do for 16 yards.

As mentioned, Sean Payton plays a part in helping supply Thomas’ video game numbers – a great example of that is on this play from last week against the Buccaneers.

…Thomas is aided by two path clearing receivers. With the two defensive backs occupied on them out of the picture, that makes it next to impossible for the defensive back to guard Thomas tightly.

In other words, you can’t guard Mike.

Thomas shows a little hesitance just before breaking on the wheel route, and then he’s off for an effortless score. Thomas continuously makes explosive plays in the Saints offense, and it’s plays like this that remind us of how friendly of an environment he’s put in.

Now, something you may have noticed is the lack of vertical targets shown in this piece. That’s not by choice – Thomas is featured in a Saints offense that very rarely throws the ball down the field. A big part of the equation is Drew Brees, whose skill set has declined to the point where he only threw nine passes of 31+ air yards in all of 2018.

Compare this to D.J. Moore, who had a reputation coming out of college as a short distance receiver. Moore had an aDOT of 9.1 in his rookie season compared to Thomas’ aDOT of 8.0. This season,  Moore’s aDOT has expanded to 10.7 while Thomas’ aDOT is 7.9.

In other words, the Saints offense is highly skilled but has a glaring weakness teams have not been able to exploit. Brees, while still a high-caliber QB, very rarely passes the ball downfield. That’s one area the Panthers can force the Saints into by shutting down the underneath area, forcing New Orleans to target Thomas further down the playing field.

That’s not to discredit what Michael Thomas has done. He’s a reception machine with quality route running and is a dangerous underneath/intermediate threat. But he’s had less chances to burn down the field because Brees’ limitations throwing downfield have prevented the Saints from opening the playbook with deep passing plays. Even if they are intent on shutting down the shorter distances, Payton’s route combinations and the route burning excellence of Thomas won’t make that job easy.

The Saints were exploited by a couple of teams this season, such as the Cowboys and Falcons, but they’ve still shredded the rest of the competition they’ve faced in 2019. As such, finding a way to limit Michael Thomas and the Saints damage in the short/intermediate areas is Job Number One.