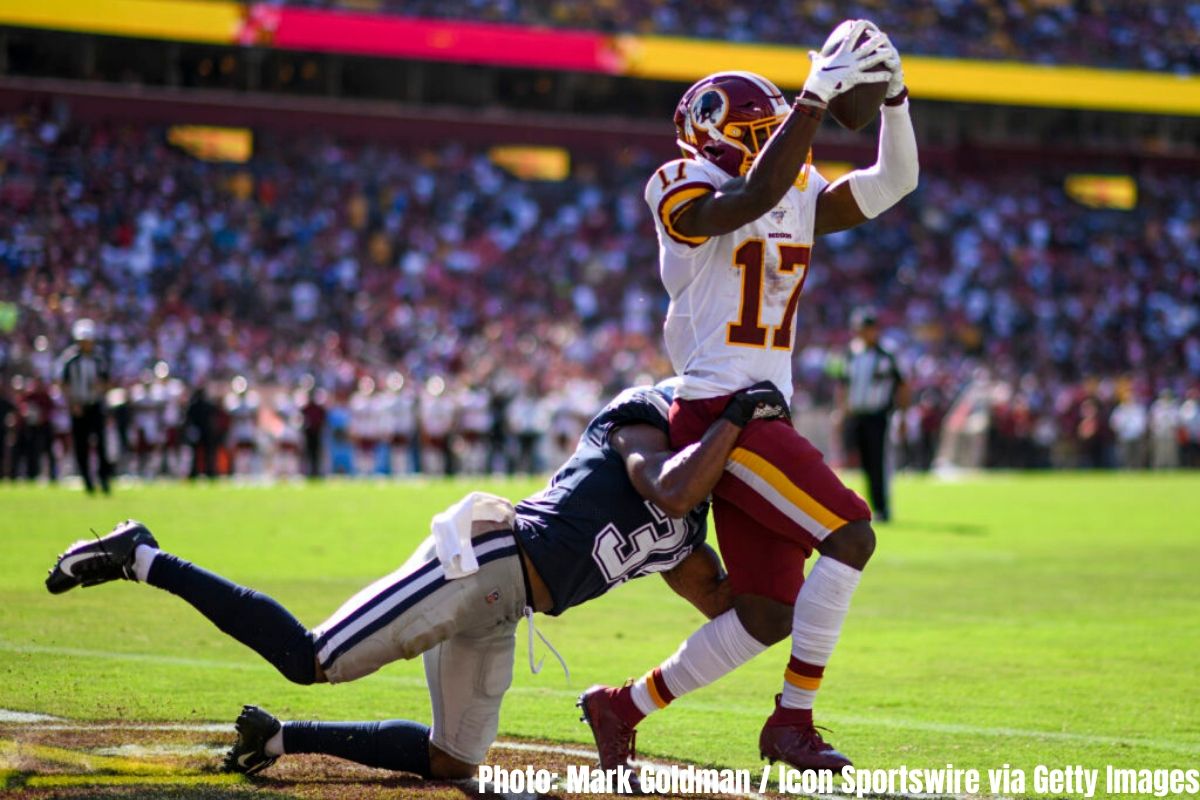 Hope everyone had a Happy Thanksgiving with your loved ones!

The Panthers’ playoff hopes remain slim to quite slim at 5-6 – and their NFC South hopes are practically gone at this point, but this week they should get back on the winning path on Sunday against the Redskins, right? Well, Washington managed to beat the Lions to earn win #2 on the season with rookie quarterback from Ohio State Dwayne Haskins last week, so it might not be so easy.

That’s the connection that this week’s Job Number One has with Haskins. Fellow rookie and Ohio State alumni Terry McLaurin didn’t receive very much press in a highly coveted draft class of receivers this offseason, but the 23-year-old has established himself as a young star, catching 40 passes for 638 yards (16.0 yards per reception) and five touchdowns thus far. He’s one of the very few bright spots on a Washington football team that is in the middle of a tank race with teams like the Bengals, Giants, and Dolphins.

This is virtually a must-win game for the Panthers since there aren’t many winnable games left on the schedule, so there’s no excuse for them to come away with a home matchup with an L. Still, McLaurin is an extremely enticing receiver who demands constant attention from the Panthers defense, so let’s take a look at what Carolina needs to know from “Scary Terry.”

As is common with some of the other Job Number Ones we’ve looked at, McLaurin’s ace in the hole comes from his technically sound route running ability. Take this touchdown against Dolphins rookie Ken Webster for example.

…hits it on the top of his route…

…and then breaks outside, catching the fellow rookie off guard as he creates a touchdown – seemingly with ease.

Quick reflexes add up to a fantastic looking corner route from McLaurin, baiting the rookie into defending a post route before running the actual corner.

This time, McLaurin lines up against Vikings corner Xavier Rhodes – one of the best in the league – in a third down situation.

As Rhodes engages in press coverage, McLaurin puts his outside hand up to swat away Rhodes’ coverage…

…and gets open at the top of the curl route.

McLaurin has the fundamentals down to make plays against press coverage. Much of his playmaking comes from his releases on routes, but on a few occasions this season, he’s also made plays at the catch point.

One such example of McLaurin’s presence on jump balls comes here against the Jets.

He sprints down the field on a simple go route

And is somehow able to extend his hands and steal an interception away from the Jets defensive back with a sensational 50/50 catch.

McLaurin’s wingspan and overall effort aid him in getting this miracle catch down. He has great instincts at the catch point and has been as much of a force at catching jump balls thus far as he has been at burning defenders with his speed.

Unfortunately for McLaurin, his statistics have been affected by pretty shoddy quarterback play. Some of it is blamed on Case Keenum, some on Dwayne Haskins. Last week against the Lions, Haskins could not stop missing McLaurin, and this including 2-3 lost touchdowns the receiver could have snagged.

Similar to his touchdown against the Dolphins…

…before working his way back outside on the corner route. This time, however, McLaurin’s quarterback can’t return him the favor.

Based on the angle McLaurin takes and how close he is to the sideline (and Darius Slay), it’s not guaranteed that this would be an automatic touchdown, but there’s no doubt that this was a huge play Haskins would love to have back.

McLaurin burns Slay on this route and should be rewarded with a touchdown.

Let’s take one last quick look at another play from the Lions game, this time on a successful connection between the two Ohio State rookies.

Watch McLaurin’s head fake at the very beginning of the route. He fakes inside, which throws off Slay’s movement, works back outside with the tiny bit of leverage gained and frees himself on the drag route for another third down connection. The detailed work McLaurin puts here should have Panthers corners shaking in their cleats.

This should be a significantly easier matchup than the Saints offense, but make no mistake, Terry McLaurin is a very talented young star with an impressive route tree, impressive route running, and a few great plays at the catch point. He is Job Number One this week on a team lacking in star power on offense, and a serious threat that the Panthers need to guard against.

Even with the aggravating level of inaccuracy displayed by Dwayne Haskins, McLaurin still has the prowess and route running smarts to alleviate this to an extent. He is most dangerous working outside the numbers, and to the left on the outside he has caught 20 passes for 346 yards and 3 touchdowns.

Related:   Film Room: The Developmental Traits That Made Stan Thomas-Oliver A Good Investment

Safe to say, Carolina must be on it’s A-game on an A-list rookie.