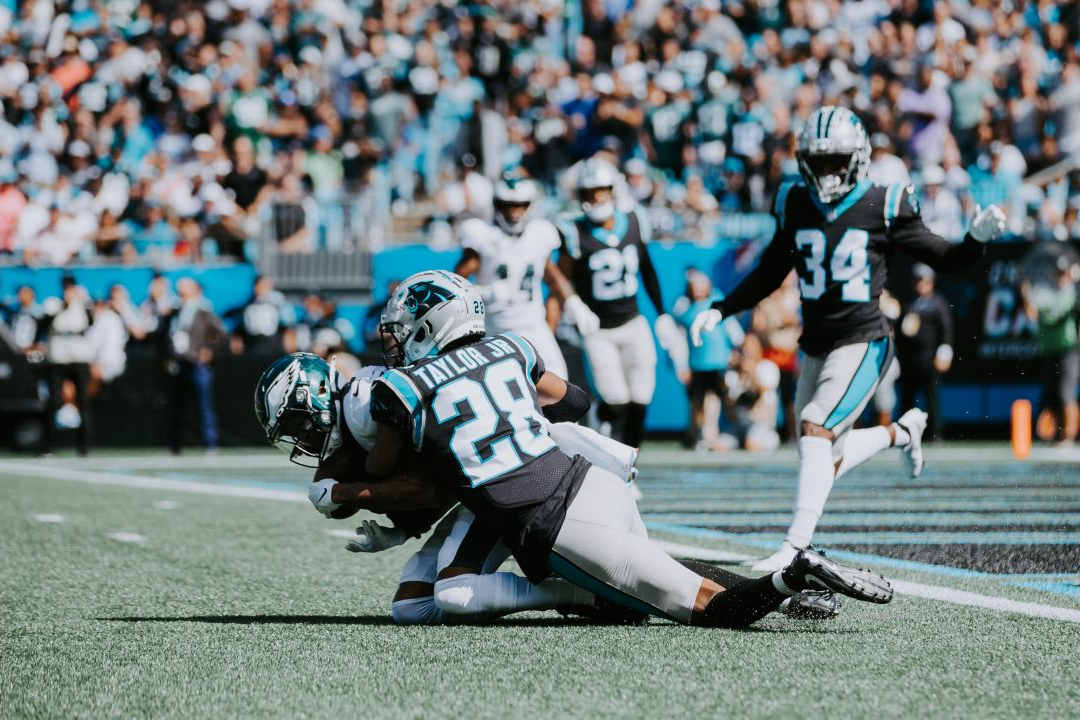 In professional football, a team’s plans for a given season are generally only as good as the personnel that they rely on to go out and execute play-in and play-out. As the Panthers know only too well, it only takes one visit from the cruel mistress of injury for the best-laid plans to go to waste. In Week 3 against the Houston Texans, the Panthers’ plans for their secondary were completely upended when cornerback Jaycee Horn, the team’s first-round pick, was lost to a foot injury that has landed him on Injured Reserve for the foreseeable future.

Following the loss of Horn, as well as other injuries in the secondary to players like Juston Burris, Myles Hartsfield, and Troy Pride, the Panthers initially traded for 2020 first-round cornerback C.J. Henderson and then one-upped that trade by acquiring All-Pro cornerback and 2019 NFL Defensive Player of the Year Stephon Gilmore. For a 2023 6th-round pick.  However, while Gilmore is due to miss at least the next game as he was placed on PUP by the Patriots, even after acquiring Henderson from the Jaguars, the Panthers’ have leaned heavily on a player who has escaped a lot of attention so far this season.

Rookie cornerback Keith Taylor, chosen by Carolina in the fifth round of this year’s Draft, has inherited a significant role on defense and has turned some heads in doing so. Playing 70 percent of the defensive snaps last week against the Philadelphia Eagles, Taylor held his own in coverage against Eagles rookie and 2020 Heisman Trophy winner DeVonta Smith, allowing just two catches for 27 yards.

On defense and special teams alike, Taylor has quickly proven to be a valuable contributor to a young Panthers team, earning him a commendation from head coach Matt Rhule this week.

“I thought Keith played really well,” said Rhule on Wednesday. “I think Keith is very confident. He’s got such length, he plays even faster than he is. He’s a competitive kid, tough kid. … Putting him out there, I don’t even think twice. I’ve got a lot of confidence in him.”

Taylor spoke to The Riot Report for a Q&A on being asked to step-up in a big way and how he’s hoping his play will make him hard to ignore in what is expected to be a crowded secondary room moving forwards. 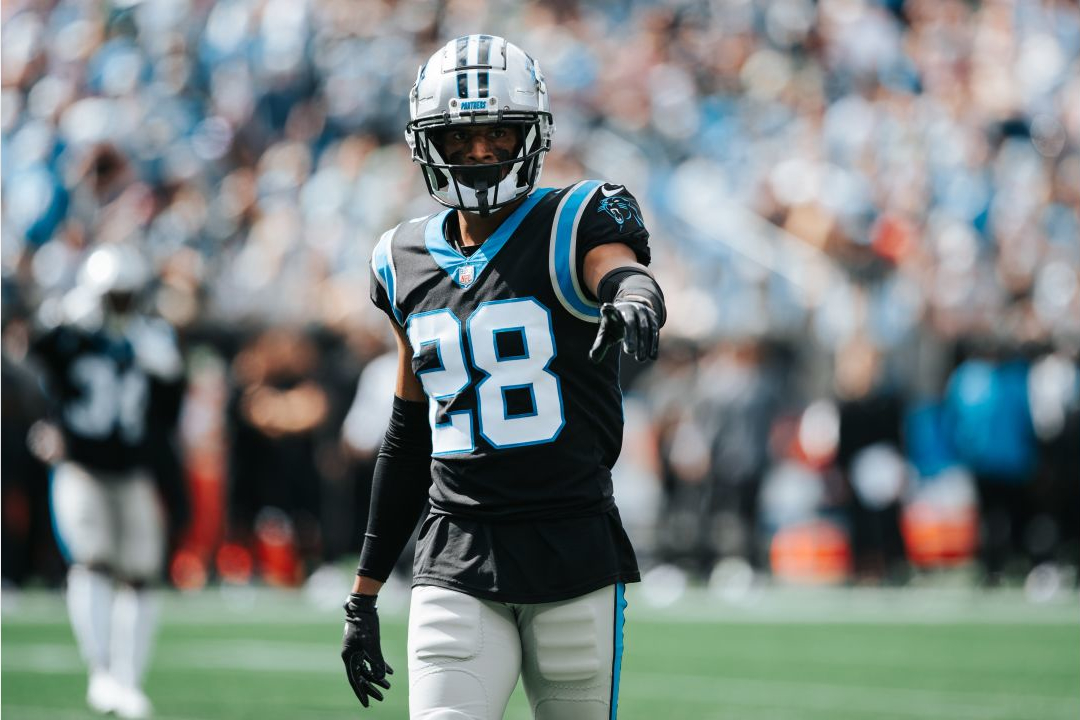 Q: The secondary has been a central part of the Panthers’ season so far: There was a plan in place Week One, and it looked like it was working really well, but then Jaycee Horn’s injury in Week 3 changed things somewhat. With Jaycee sidelined and a lot of personnel movement among defensive backs, how do you think the secondary has responded to this early season adversity?

Keith: “I feel like there hasn’t been a drop-off at all. I think everybody who had to step up has stepped up, and I think we’ve been doing a pretty solid job of that these last couple games during all those injuries that happened with Juston Burris and Jaycee, Myles. I don’t think there’s been a drop-off, so I think everybody’s been handling it pretty well.”

Related:   The Panthers' 5 Options With The 6th Overall Pick

Q: You’ve been getting a lot more playing time the past few weeks – Especially last week against Philly where you played 70 percent of the snaps on defense. How would you assess your play so far, and what feedback have your coaches given you on what you’ve done well and what you can improve on?

Keith: “I think I’ve been playing pretty solid. It’s just one day at a time, I’ve got to keep improving in practice. My coaches want to see me be more confident out there and just make more plays. That’s really all it is. I’m just hoping that as those opportunities come, I just continue to improve.” 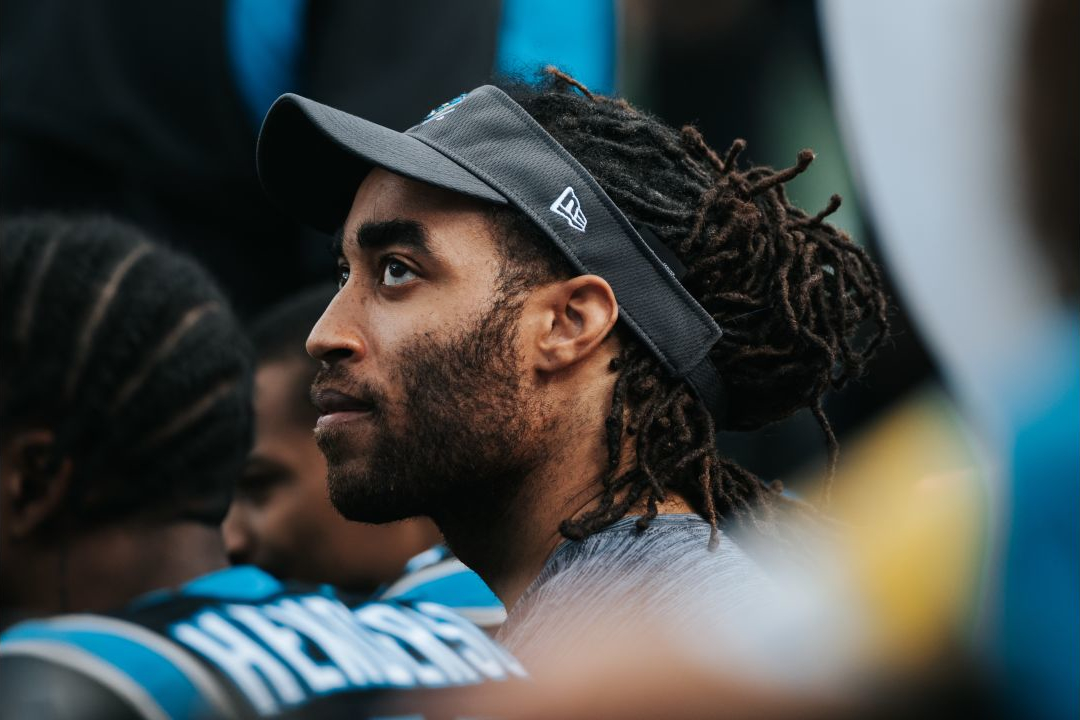 Q: Since Jaycee’s injury the Panthers have taken some pretty big swings at adding to the secondary through trades. That’s generated a lot of excitement for this team from the outside, but what’s the mood like among the defensive backs given that it’s your group that’s being added to and your group that’s now being pointed to as a strength of the team?

Keith: “Oh yeah, for sure. I think it gave the whole room some confidence, really. Especially bringing Stephon Gilmore here, because he’s one of the best corners in the league. So every day, shoot, I’m trying to get some tips and pointers from him. I’m just trying to learn as much as I can. And as far as CJ, he’s trying to learn as well. I’m happy they’re here. I think we have a pretty stacked DB room and we’re gonna be ready for whatever when the time comes.”

Q: How has working with CJ Henderson been so far? What about Stephon Gilmore?

Keith: “Working with CJ has been good, man. He’s a real quiet guy, but he’s a real cool dude. He’s a quick study, I like being around him. He’s always eager to learn something new every day. As far Stephon, I haven’t really seen him out there as much during practice. But whenever I do see him, I’m asking him questions in the film room. And he has something for the DBs whenever he gets a chance to talk.” 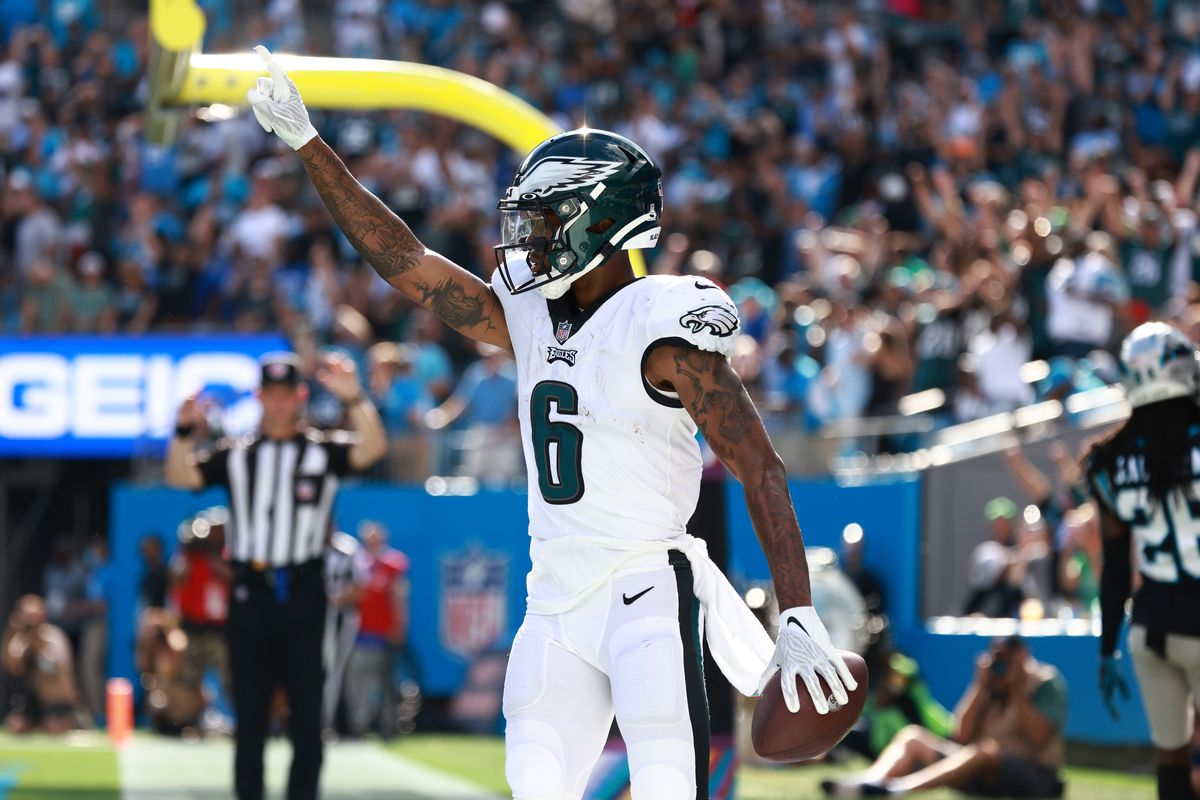 Q: Your assignment last week was covering DeVonta Smith, who won the Heisman Trophy last year at Alabama. Now, it doesn’t matter where you were drafted now that you’re here and in the NFL, but you did have to wait all the way until the fifth round to have your name called. What does it do for you to know that you were able to hold your own against a Top 10 pick who came in with a lot of hype like Smith?

Keith: “Shoot, as far as my mindset is, it doesn’t matter who’s in front of me. I’m just gonna play my part, I’m gonna try and be as dominant as I can. Doesn’t matter whose name is in front of me. Don’t get me wrong – DeVonta Smith is a great player, Jalen Reagor, all those guys, so I was real pumped up to play against them. And we’ve got two more good receivers coming in in Adam Thielen and Justin Jefferson. So I’m excited for those matchups as well when I get a chance to play them.”

Q: I want to ask you about your fellow Husky in Shaq Thompson – I’m sure you were familiar with him from playing at Washington and then being drafted to the same team as him, but what has your working relationship with Shaq been like and what have you learned from him?

Keith: “Really just the little things about the league. Taking care of your body, taking care of all your money, little investment things. And just being a team player, not to have a big ego when you walk into the door. But he’s been a great leader on this team, a great person for me to talk to whenever I need some advice. Just those overall things. And you know him being from Washington is also a plus too, so we can relate to some things with that.” 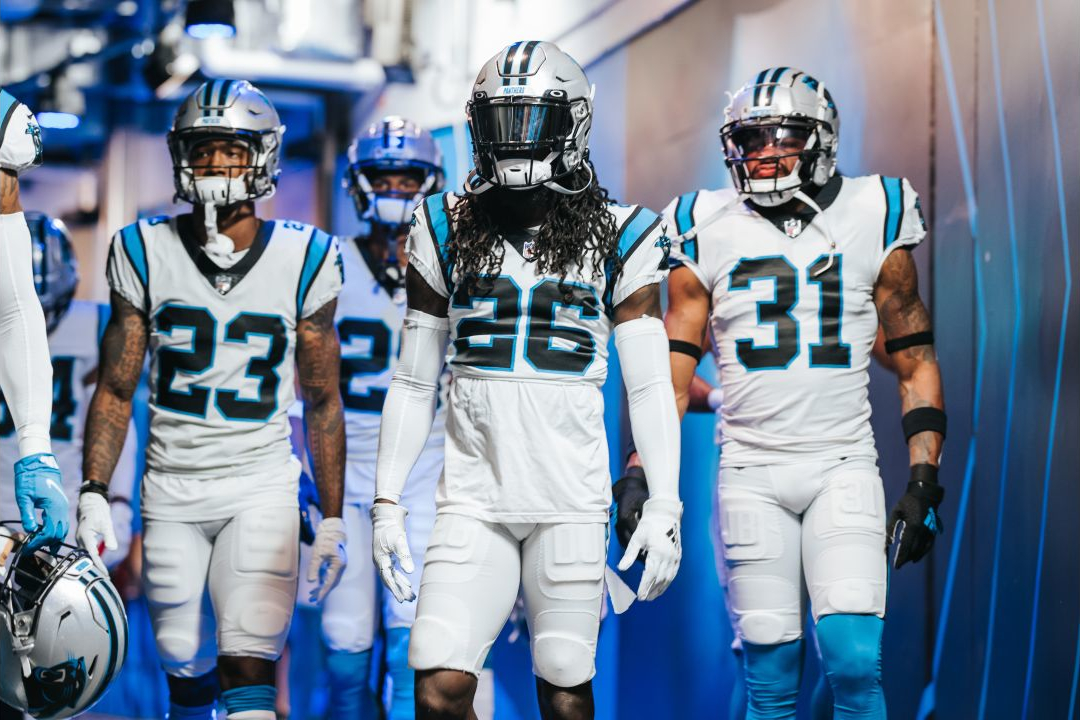 Q: Another teammate I want to ask you about is Donte Jackson: He’s a team captain now, but it wasn’t long ago that he was the young guy in the room and learning from the vets. What have you yourself learned from working with him in the DBs room?

Keith: “Just little small technical things with my technique. I try to nitpick the little things he does in his technique as far as a press standpoint. I admire a lot of the things he does, and I try to implement that in my game. He’s been a great teammate as well. That’s somebody I can come talk to, and he’s a real fun guy. A really funny dude as well, always making us laugh and joke around. But other than that, when it’s game time, he’s real serious. So that’s one of my guys for real.”

Q: You’ve played over half the snaps on special teams in every game you’ve played so far. Players all have different feelings about special teams – some guys make careers out of it, other guys don’t want to do it as much as they want to play offense or defense What’s your approach to playing special teams, and how much do you want being a capable special teamer to be a part of your game?

Did you play Teams at Washington?

“Yeah, I played Teams all four years. Kickoff, punt return and all that.”

Q: The special teams group did give up a big play against Philly that proved to be the difference late in the game. What has the mood been like among special teams this week, and how has Coach Blackburn set the tone for how you guys are going to respond and bounce back from that miscue?

Keith: “We’ve just got to step up, that’s all he’s been saying. We can’t let anything like that happen anymore. He always brings up the Saints game where we kept giving up those long runs on kickoffs, and the kickoff team had to step up as well. And I think we’ve been doing a pretty good job over the last couple weeks. 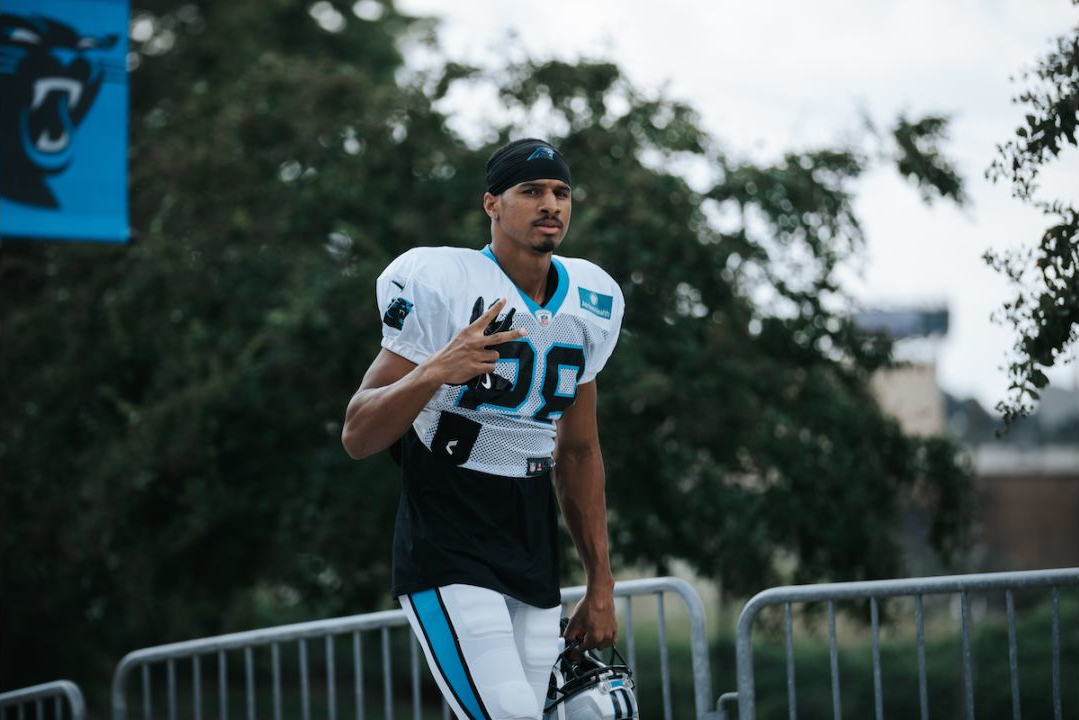 Q: Looping back around to Stephon: Getting the opportunity to get a lot of snaps is a big deal for you, but with Stephon ramping up it’s hard to project how long that might last. Is there any part of you that’s trying to show out in order to show the coaching staff that you should keep getting snaps even when Stephon is ready to go?

Keith: “Quite honestly, I think I’ve been showing that every time I’ve stepped on the field. But I’m just gonna keep trying to progress, and once Stephon gets back, I’ll just play my role and just be ready when I have to be ready. I’ll just stay ready is what I mean. But I’m not totally worried about it. I’m very patient with everything – It’s a marathon, not a sprint. So I’m just playing it how it is.”

Q: Finally, I’m sure that you had goals for yourself laid out before the season started. Have you met those goals so far, and have they changed at all as circumstances have dictated an expanded role for you?

Keith: “Honestly, one of my first goals was to start by Game 8. I’m kind of ahead of schedule on that one, starting Game 5. So I guess I kind of reached that goal. But obviously I still want to keep progressing into more of a role as well. And my next goal was to have four interceptions by the end of the year. It’s gonna be a long season, so whenever I get my hands on the ball, I’ve got to make them count.”

How big of a role on defense Keith Taylor holds on to when Stephon Gilmore and CJ Henderson return more fully remains to be seen, but as much attention as the likes of Jaycee Horn and others have received this season, it seems likely that we will be continuing to hear Keith Taylor’s name called for a while in Carolina.