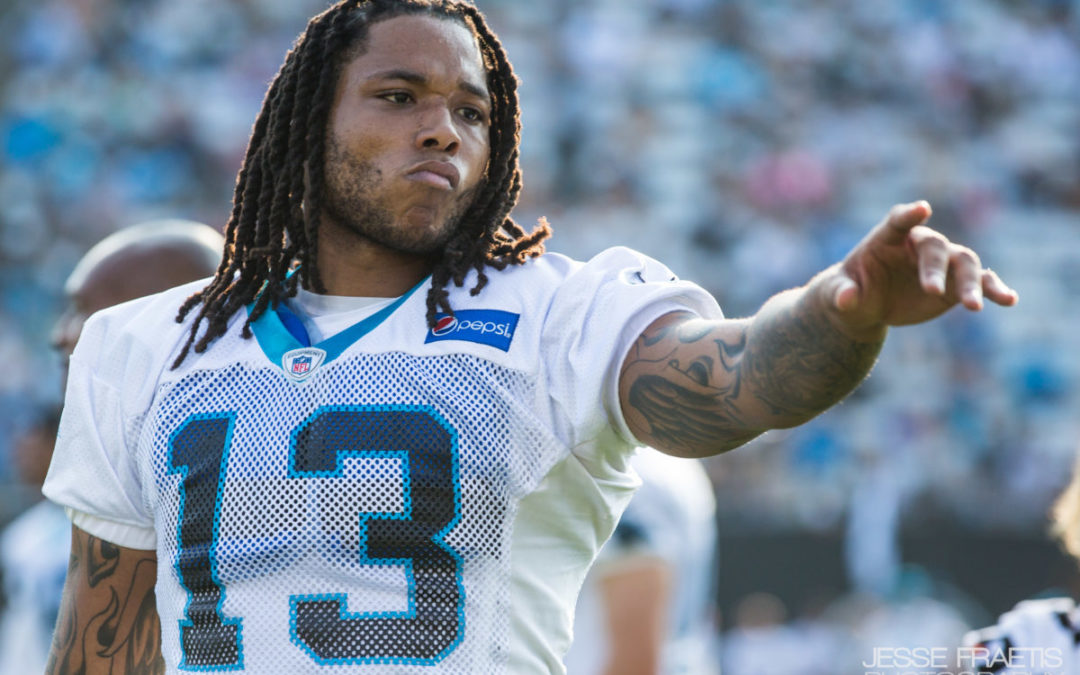 Wide receiver Kelvin Benjamin has been traded from the Panthers to Buffalo to reunite with former Panthers assistant general manager Brandon Beane, who was part of the team who drafted him in 2014 along with former Panthers GM Dave Gettleman. Benjamin was a divisive player, well-liked by many as a big, bruising wide receiver who used his size to his advantage or called a poor route runner who too often “played small” by others. Analysts Vincent Richardson and Sean Mauk are two of those divided in their opinions on the trade, and they decided to discuss their feelings on whether the Panthers got the short end of the stick by trading a #1 option or whether they unloaded a player who couldn’t live up to his contract number at just the right time.

Vincent: When Kelvin Benjamin declared for the 2014 NFL draft, I awarded him a late-third to early-fourth round grade. He had some issues against press coverage, his route-running was all over the place, he had too many drops, he lacked the speed to stretch the field and he added nothing after the catch. Three-and-a-bit years later and Kelvin Benjamin has been traded to the Buffalo Bills for almost exactly that: a third and seventh round pick, with each projected to be towards the middle of the draft. With this in mind, this trade should very much be seen as a win for the Panthers.

Sean: I disagree, we are shipping out someone that can help us right now for an unknown that may never come to fruition. For every Charles Johnson in the third, there’s a Sione Fua. For every Trai Turner, there’s an Atiyyah Ellison. Over the remaining 24 game on Benjamin’s contract, he is projected to make 101 receptions on 188 targets for 1450 yards and 11 touchdowns. Disregarding the fact that eight of those games would occur before either draft pick can be used, it is highly unlikely that the draft picks will provide equal value over their first 24 games with the Panthers.

Vincent:  Benjamin’s value has actually fallen since he was drafted. In 2014, he was a 23 year-old with the potential to develop skills as a pro and with a relatively team-friendly rookie contract. Now, he is a 26 year-old who has failed to develop significantly and who is due to make over $8,450,000 in the final year of his contract next season. That is money that can now go to Andrew Norwell or Star Lotulelei, players whose impact on the Panthers is far more significant. Not to mention the draft picks.

A third round draft pick should be seen as a real commodity; obviously, not all third round picks are starters right away but Kurt Coleman, Turner, Andrew Norwell, Johnson, Mario Addison, Captain Munnerlyn and several other Panthers starters were taken in the third round or later. If you want to make a really optimistic argument, it should be noted that several of the Panthers starters weren’t drafted at all, and so the value of the seventh round pick shouldn’t be completely ignored.

Sean: If creating cap space in order to sign Andrew Norwell was one of the driving factors for this move then it is time to review the Trai Turner contract, which ended up paying an unproven guard $11 million a year. Had the team either gotten a deal done with Norwell first or offered Turner a contract closer to his actual value, they wouldn’t need to trade away their number one receiver in order to find enough cap space to sign the better of the two guards. If this is a football move, then it’s one that I disagree with; if it’s a move that is strictly to get Benjamin’s contract off the books, then that’s just as bad if not worse.

Vincent: While the loss of Benjamin from a football standpoint won’t necessarily make the offense better, to view Kelvin Benjamin as a pure number one is a fallacy. He is a 6’5″ player who consistently plays small and can’t win against press coverage. As can be seen on the following two plays, both from the first quarter on Sunday, it can be seen how Benjamin struggles to consistently win against press even against much smaller defenders. What is also shown on these plays is how his lack of vertical speed makes it very difficult for him to separate on downfield routes:

The issue with this lack of vertical separation is that it then allows defenders to sit on underneath routes without having to worry about being beaten over the top, as can clearly be seen on this play, forcing Kelvin into shoving off his defender; something that will often lead to a flag. In fact, Benjamin has been called for offensive pass interference five times in his two and a half seasons with the Panthers.

Sean: Come on, if you want to cherry pick plays where he didn’t look great away from the ball, you leave out GIFs where he uses his size as a weapon. He gets no credit for plays like this?

Vincent: Yes, Benjamin does have some value in the red zone. But the value this has on the game overall is limited, especially with large redzone targets in Devin Funchess and the returning Greg Olsen already on the roster.  Benjamin has a value, but a third and seventh round picks plus roughly $9 million for a season and a half is far, far more than that.

What’s more, the same fundamental issue that has given him difficulty against press, his long stride length limiting his change of direction, also limits him as a route runner. On the following play, it should be expected that the receiver will be able to force the defender into his backpedal before breaking to the post to generate separation. However, Kelvin’s lack of vertical speed allows the defender to avoid committing vertically and his slow change of direction allows the DB to break to the route point with ease:

All of these plays were from the first twenty minutes against the Buccaneers on Sunday and while further examples could undoubtedly be found, there is really no need to look any harder as almost every passing snap shows some significant flaw. This doesn’t even take into account his repeated issues with drops or the effect he has on the passing game as a whole.

As Newton has continued to focus on Benjamin as a receiver in recent years, it has prevented potential completions to other, better receivers. The fact that the offense was significantly better without Benjamin in 2015 isn’t totally coincidental; the Bills gave up genuinely valuable draft picks for an over-priced eighteen-month rental on a mediocre receiver; the Panthers won this trade.

Sean: The Panthers made a poor decision to trade Kelvin Benjamin for a third and seventh round pick. Taking away the 1,000 yard season the team is inevitably giving up and the fact that Benjamin was far and away the best blocker among the Panthers’ receivers, my biggest concern moving forward is how much this move will effect the locker room dynamics considering Benjamin and Newton were very close and a number of players have publicly reacted to the trade negatively.

But let’s ignore the football reasons and the locker room reasons and get to the thoughts Interim General Manager Marty Hurney said were behind the move: that it would create more speed and variety among the wide receiver group. If that’s the case, it’s an unnecessary roster move! Simply taking away an option does not inject a unit with speed nor variety! Benjamin’s departure will force Curtis Samuel and Russel Shepard into bigger roles in the passing game, but they could have been more heavily utilized without trading Benjamin.

When the Panthers traded Benjamin away, what they did was put even more pressure on Cam Newton to be the entire offense and made their team worse while they were still in the thick of the playoff hunt. They gave up an asset, they hurt the team, and they lost this trade.

Who do you agree with? Sean or Vincent? Let us know in the comments!