The Most Important Piece Of Equipment In Football 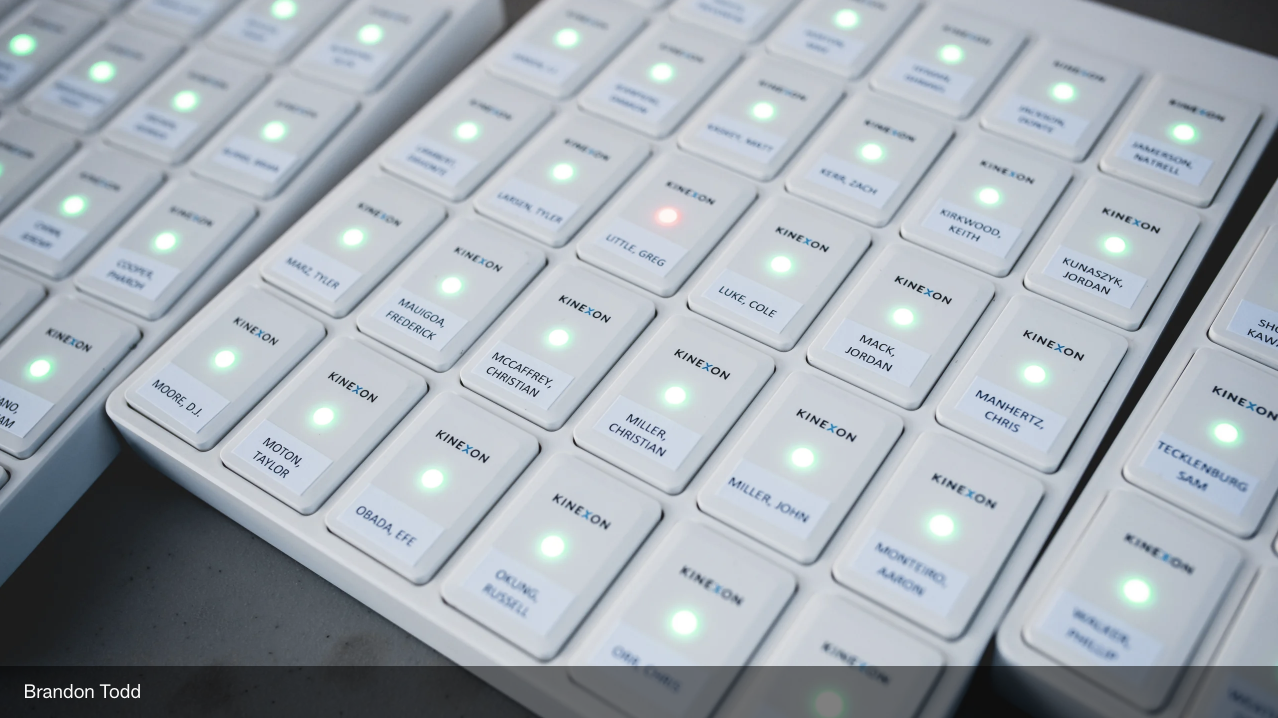 The Carolina Panthers – and by extension, the entire NFL – has a problem. They’re not talking about it directly, but it’s at the edge of every conference call with Dr. Allen Sills, every virtual press conference with every coach around the league, every photo gallery from the first weeks of the weirdest training camp in the history of the league.

While some questions at press conferences concern who will fill an empty guard slot, which player will return punts come Week 1 or how many quarterbacks a team will carry, the shadow of trying to play football in a global pandemic, of trying to social distance while playing the sport with the most contact even makes sense, that is the topic that dominates the league.

And the evidence that the NFL is doing everything in their power to identify infection is everywhere, from the 40-page list of protocols sent from the league office to clubs to the obstacle course of nasal swabs, COVID surveys and hand-held thermometers it takes to get into the building at the corner of Mint & Morehead.

“The process is crazy,” Panthers defensive tackle Kawann Short said. “I mean, as soon as you get out of the car you have to do a test. You can’t really get in the parking lot without a mask. Hand sanitizers everywhere. Then after that, before you get to the door, you have to fill out a survey and have another temperature check. We have these monitors where you can’t get too close to anybody.” 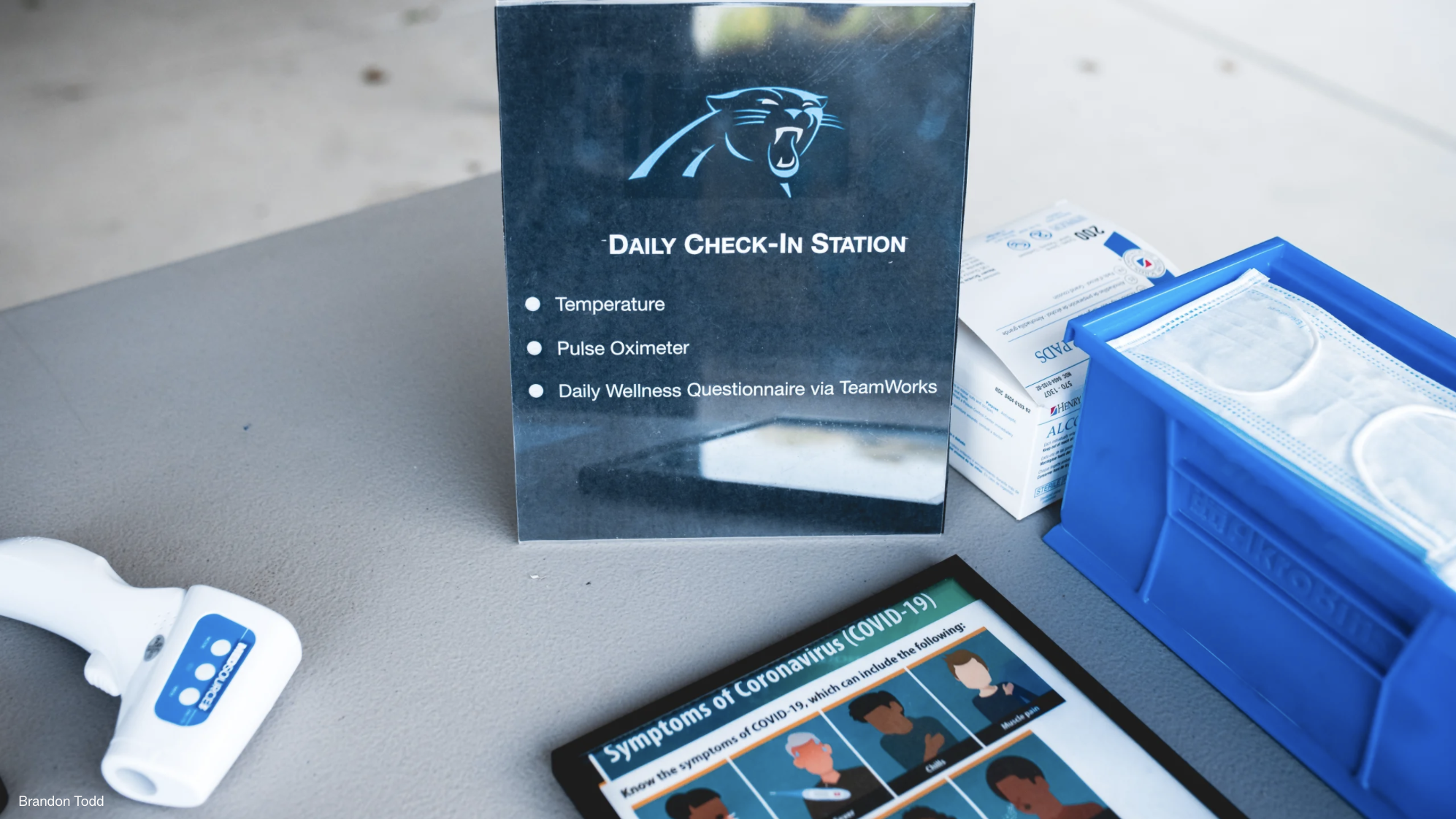 While testing is a huge part of prevention, it’s only half the battle.

Teams can take your temperature when you walk in the facility, they can vehemently test you every 24 hours like clockwork, they can even install a human car wash that will lightly mist you with sanitizer, as they have in Denver – but none of those will protect you from COVID-19 the same way that simply staying six feet away from someone who’s infected will take care of the issue.

And rest assured – someone will almost certainly get infected.

While the NBA, NHL and MLS consistently report no new positive tests in their respective bubbles, the NFL’s model is closest to Major League Baseball, with teams playing in their respective stadiums and opponents traveling across the country. While players like Matt Paradis are quick to point out that there is more travel and more games played in even a shortened baseball season than the 16 weeks ahead of the NFL, the similarities are unavoidable – America’s Pastime has canceled more than a dozen games since starting their truncated season began on July 23rd as outbreaks spread across multiple teams.

The NFL is currently on a better path – and they desperately need to keep it that way. Since reporting to camp, 56 different players have tested positive for COVID-19; while that’s only 2% of the approximately 2,600 players on active rosters, that number will almost certainly rise – even though the Panthers and other teams have offered to put their players up at a hotel for the duration of camp, most have chosen to stay in their own homes and it’s up to the players to keep themselves and their teammates safe.

The coronavirus doesn’t care if you’re a professional football player, a former presidential candidate or the greatest living American actor. If it’s airborne within six feet of you, it’ll infect you. And if a player, coach, media member or anyone else who works at Bank of America Stadium slips by the testing protocols, the Panthers are taking a unique approach to keeping their personnel six feet apart.

“I tell our guys, ‘Eight is the new six.’ They say six feet; we’re trying to do everything at eight feet as best we can,” said Head Coach Matt Rhule last week. “I hope that when our players show up, they’ll see that in a hard situation, we’ve done our best to try to make this a brand new place and a brand new space for them.” 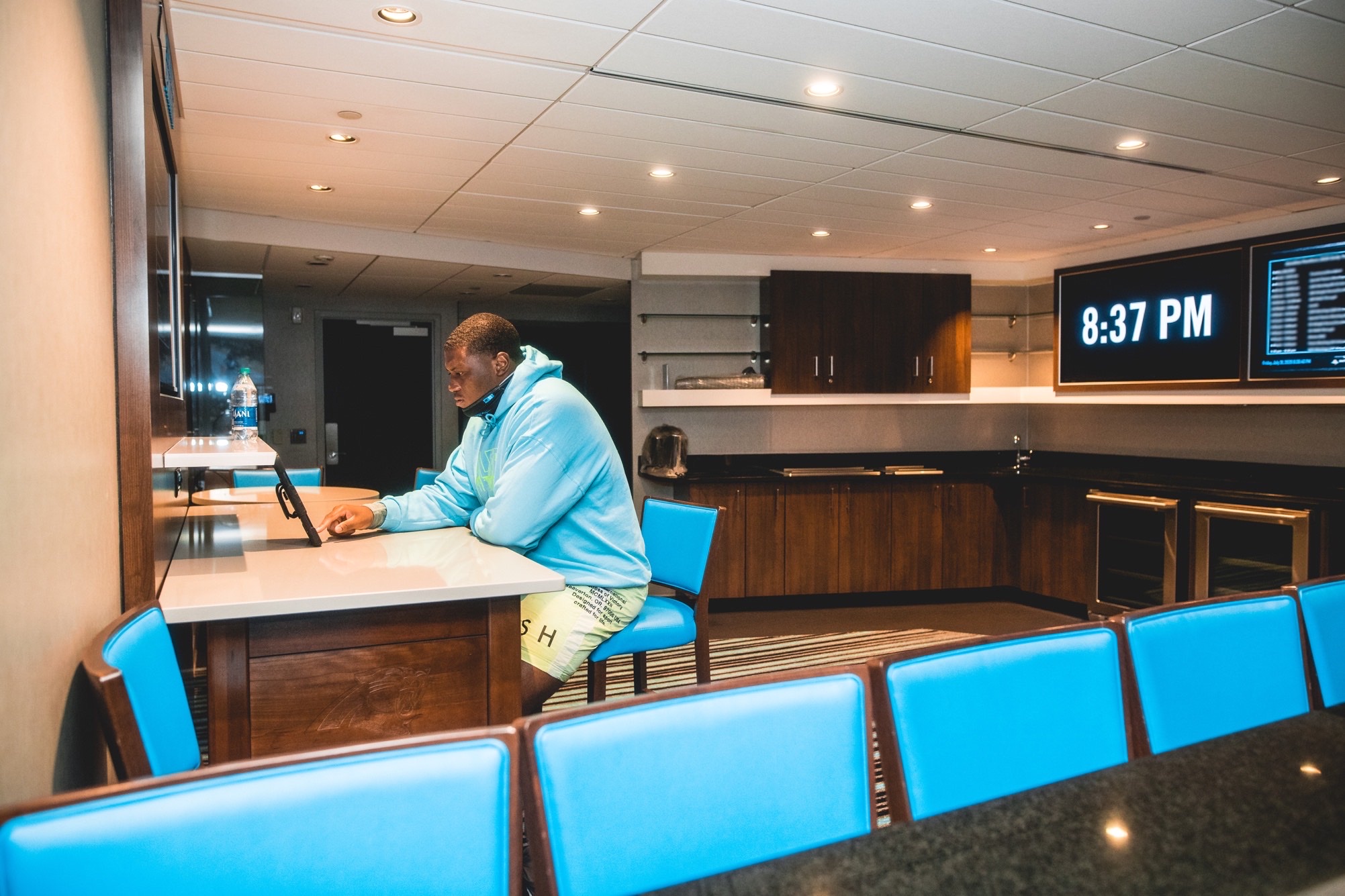 That means knocking down walls to create new treatment rooms across Bank of America Stadium, giving each player their own personal suite on the 300 level in which to attend virtual meetings with their position groups a few doors down or blow a horn every nine minutes to remind your players to not stand next to someone else for too long – but if the virus does manage to get in the building, if it manages to sneak past the three tests and avoid the thermometers and slip undetected through a mask, how do you keep it from spreading to the entire team once it’s inside?

That’s the billion dollar question – and the NFL is hoping that they have the answer in a six square inch piece of plastic that weighs less than a half ounce and blinks red when you’re within six feet of another person.

“It’s a constant reminder to all of us,” said Rhule. “When it starts going red, you think you’re six feet apart and it starts blinking, you just back up until it stops blinking. Like, oh – this is six feet.”

“Even though you want to be close to your brothers, talk to your brothers and all that,” Shaq Thompson added, joking that quarterbacks especially will be given a wide berth. “You’ve just got to stay back.”

“There is no room for error.”

Prior to the COVID-19 pandemic, Munich-based technology company Kinexon could track a person, ball or….basically, anything – they’d used their wearable technology to help provide complex analytics for sports leagues like the NBA, Bundesliga and NHL. But when COVID hit and they realized that they could use the same radio frequencies to ensure social distancing, they pivoted from tracking top sprint speeds and court positioning to using those ultra wide-band frequencies that could track location within a centimeter to measure if people were keeping a safe distance from one another – and how to track an infection in real time if one occurred.

“The whole discussion [became] around how can we get our employees back to work in a safe manner, ensure that everyone’s [using] the physical distancing and especially, when it comes to contact tracing, how can we limit the risk in case of infection?” CEO of Kinexon Mehdi Bentanfous told The Riot Report in a phone interview last week. “How can we use [our technology] so that we can present or offer a solution that covers these two topics?”

“There is no room for error. If there is an infection and you’re not ensuring the physical distancing, that can have a huge impact on your operations, on your league, on basically your existence. This is where the SafeZone solution became something that is not nice to have, it’s a solution that can be mandatory.”

So as every Panthers player, coach and staff member deemed Tier 1, 2, 2M (that’s media) or 3 personnel enters Bank of America Stadium, they’re given a tracker, which will flash if they get too close to another unit. Players can wear them on the wrist or in a lanyard and they’ll be a part of their equipment during both practice and games.

The proximity recording devices only measure the distance between each other at the rate of one time per second and only records the timestamp and does not record any location information to respect data privacy and protection.

And the Kinexon equipment that is being used not only by the Panthers but across the NFL will be invaluable if someone in the building does test positive – say a defensive lineman tests positive on Friday morning, but with the test results not coming back for 24 hours, that lineman spends the entire Friday at the facility – going to practice, meetings, eating lunch, working out in the weight room, chatting with teammates in the hall. When the results are returned on Saturday, it’s not only that defensive lineman that will have to go into quarantine – everyone he came into close contact with will be subject to the NFL’s protocol.

Contact tracing using the information from the devices will be conducted by IQVIA, an independent third-party company that works with the NFL on health and safety-related data. IQVIA will identify employees and players who had a close contact with an infected individual and react accordingly.

“Contact tracing is an important part of any strategy to reduce the spread of COVID-19, and the NFL’s strategy is no exception,” said Dr. Dev Anderson at Infection Control Education for Major Sports. “The NFL’s prevention protocols contain many layers and multiple interventions, but they won’t reduce the risk of COVID-19 to zero. If and when an infection occurs, prompt and detailed contact tracing can identify additional personnel who may have been exposed and determine if additional testing or quarantine is required.” 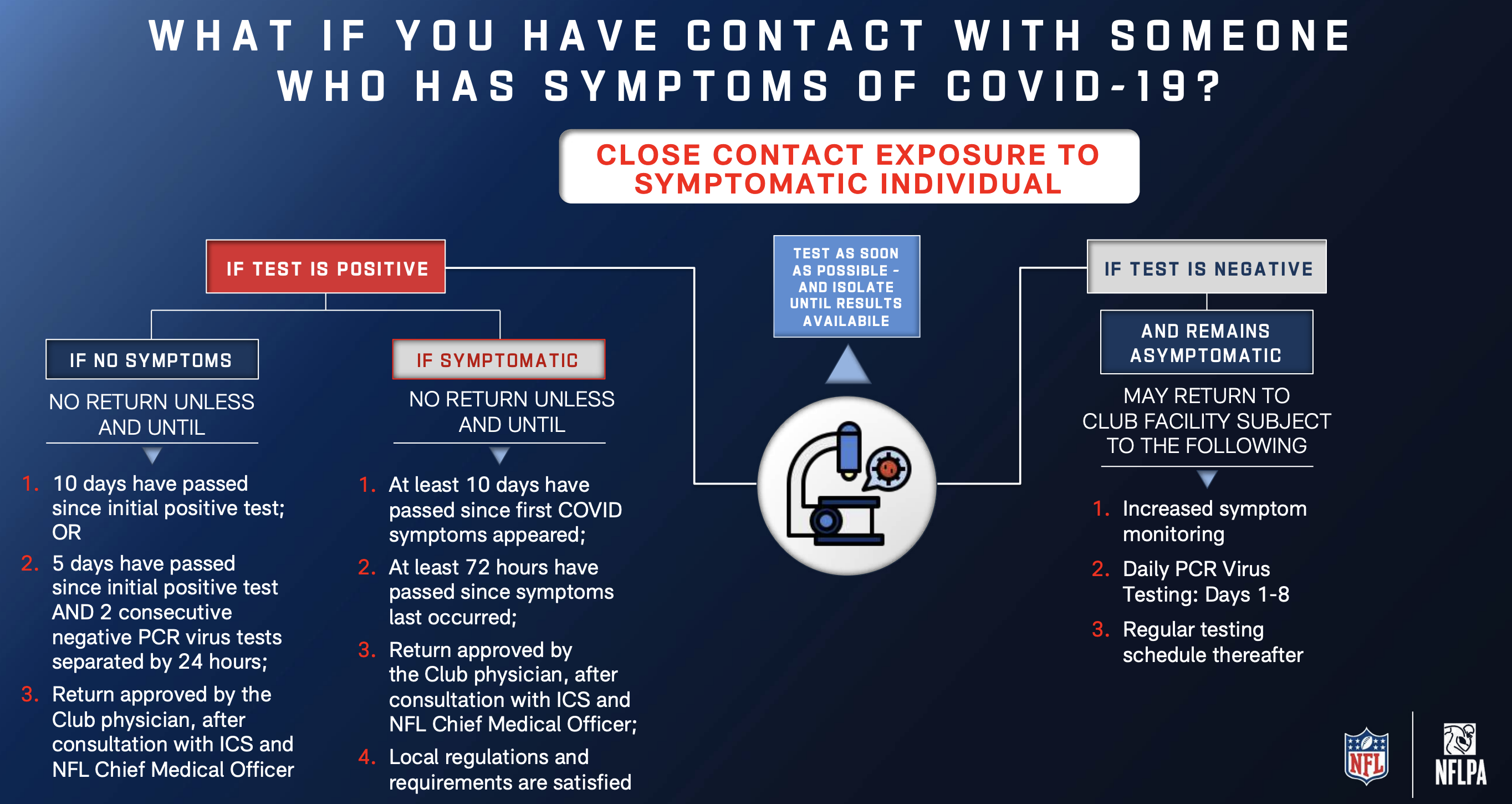 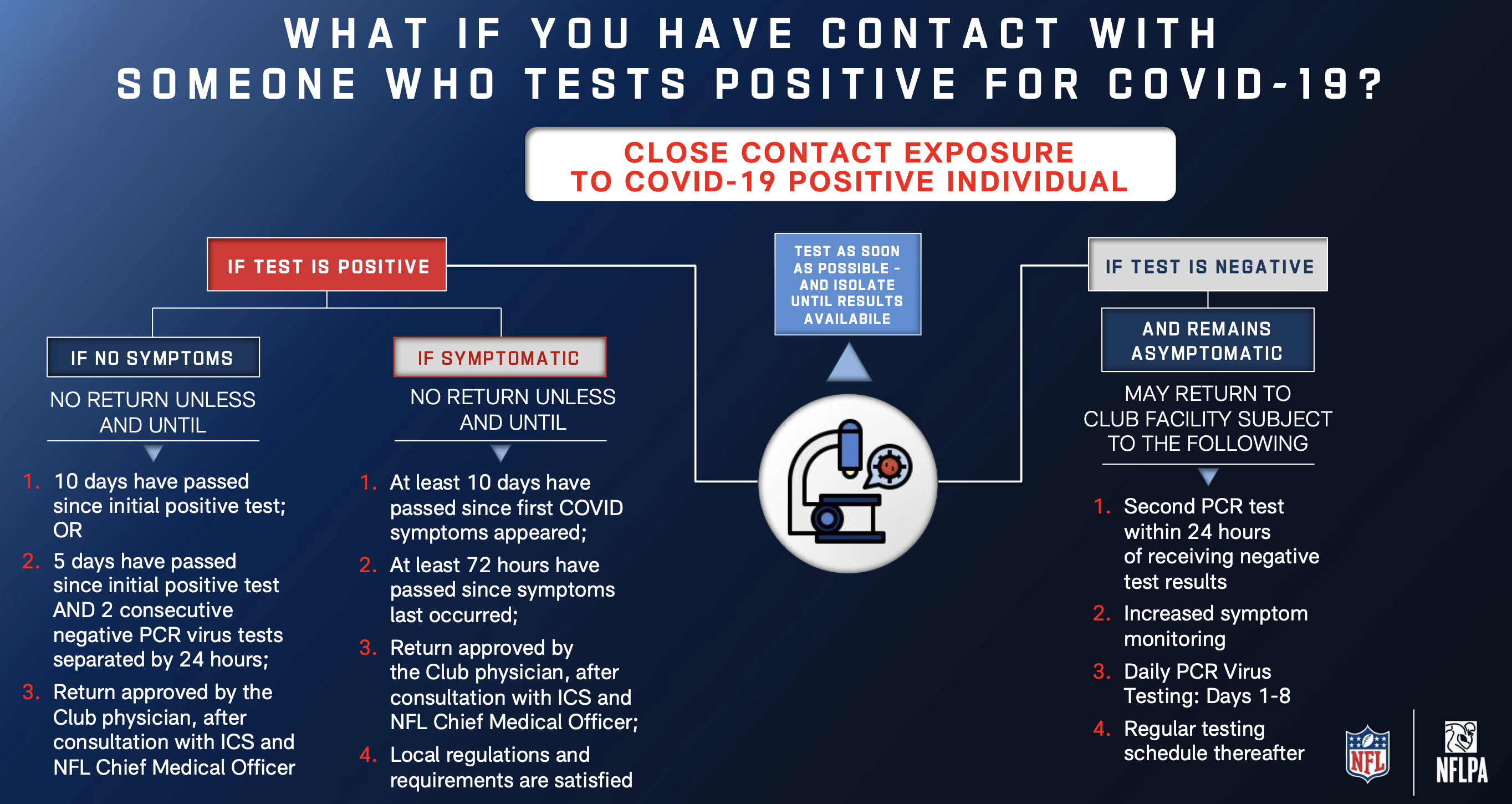 The NFL – and Bentanfous himself – are hopeful that measures like this can help the NFL complete it’s season just as Bundesliga, the first European Soccer League to resume play, was able to finish their play with the help of Kinexon.

“With the SafeZone tag, rather than tracking sprint data of upcoming opponents or whether an injured player has returned to the same physical metrics they had pre-injury, they’re tracking strictly the positioning and contact with other people in the facility – the advantages that precise measurements and reliability of being able to perform in a stadium surrounded by tens of thousands of fans appealed to the NFL in order to help the league identify and properly isolate and treat, if applicable, a player or other club personnel who have come into contact with an infected person.”