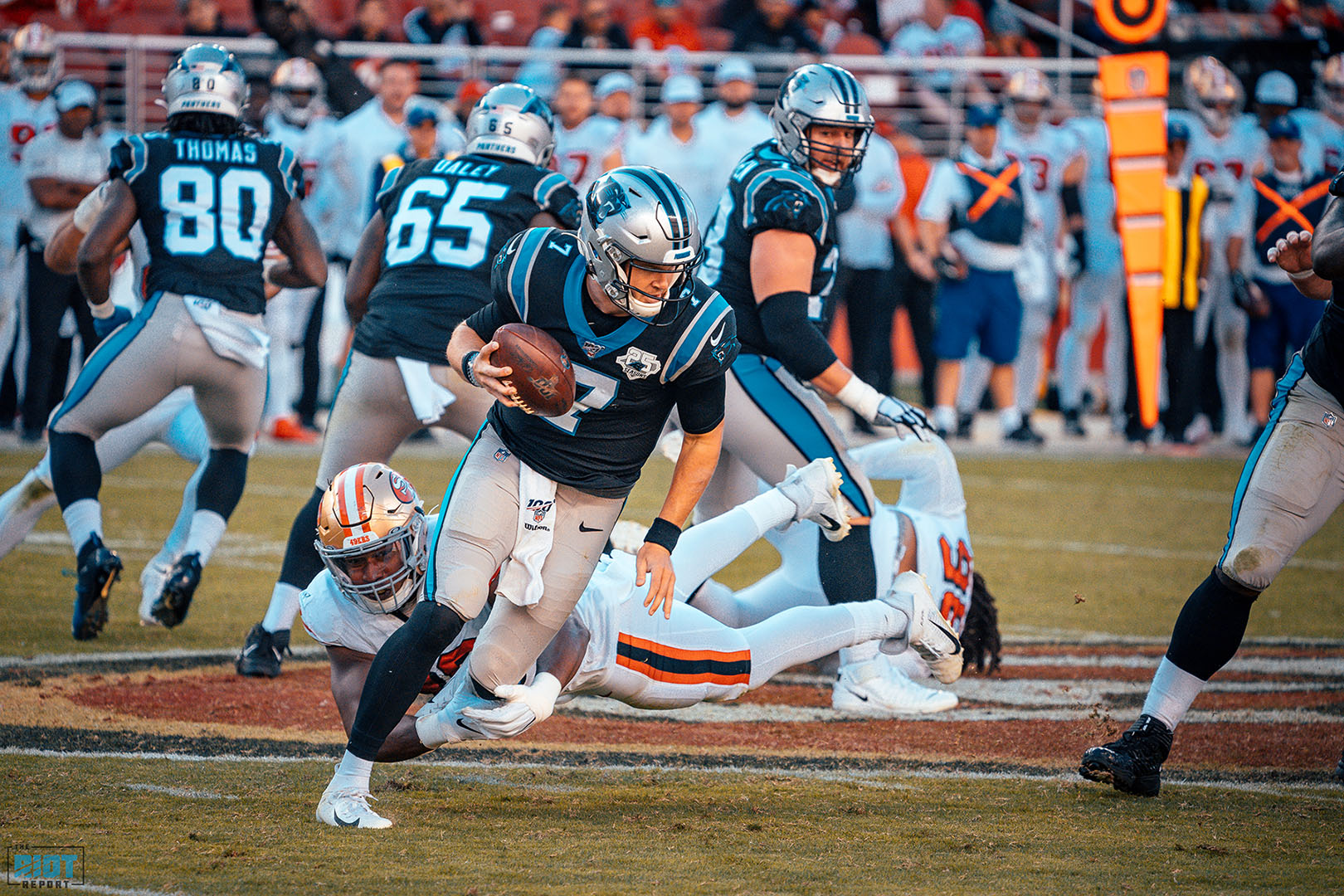 When Kyle Allen was tearing things up against the Cardinals, one of the comparisons that was made was to Alex Smith, in that he was being very careful with the ball and while he wasn’t dropping 40 yard bombs left, right and center, he was consistently making the right decisions to move the ball down the field. That was not something he did well on Sunday.

There were, in fact, nearly a dozen instances where Allen seemed to really struggle make good decisions with the ball, so let’s look at a couple. First, here’s a sack from early in the first quarter:

Now let’s freeze the play at the point where Allen tucked the ball:

This appears to be some form of Cover 4 with the safety deep and the two outside corners playing the deep thirds, but this isn’t massively important compared to the fact that the receiver Allen appears to be staring at – DJ Moore – is clearly wide open breaking outside and he also has Jarius Wright open underneath in a space in the zone. Yes, there is a defender vaguely near him but if you had seen this frame and not the play itself you would be shocked if the result wasn’t a fifteen yard plus gain to DJ Moore.

And again, at the point where he released the ball:

The 49ers appear to be in Cover 3 and this time it is more relevant because Jarius Wright is running a route designed specifically to target Cover 3. The outside receiver (Samuel) on the far side runs vertical to force the corner up the field and the tight end running to the flat causes the flat defender to come down to the line of scrimmage, leaving a huge gap between the two levels of the zone defense for Wright to run into. Yes, these plays often have an option for the QB to go deep if it’s there, but as we’ve already discussed, Allen hasn’t exactly shown the best deep ball to this point and even if he did the outside corner is in prime position to stop the vertical route.

In this instance, Allen has plenty of time to throw and should recognize that he has the exact coverage that the play was designed to beat.

If he had put the ball anywhere inside the yellow circle, the receiver would have had a pretty good chance of coming down with the reception and with plenty of room to run after the catch. While the missed throws and the lack of pocket presence are troubling, it is that inability to consistently execute the offense that could hinder Allen the most.

Again, this isn’t something exclusive to the 49ers game:

Christian McCaffrey was the wrong choice.

As was Jarius Wright, who should still have caught the ball but was never the right read from a clean pocket.

Yes, it is easy to take a couple of plays here and there and point out mistakes in any quarterback, but Allen has unfortunately shown repeated issues in executing the offense at a high level after the Cardinals game. For the most part, he has looked to dump the ball off short an excessive extent and when he has looked to push the ball downfield, he has struggled to execute the plays effectively. What’s more, even when he has very simple reads to make but where timing is more important, he has shown a hesitancy which, to be blunt, he just doesn’t have the arm talent to allow for:

This isn’t meant to be some evisceration of Kyle Allen – for a largely untested backup thrown into the fire due to injury he has done remarkably well for the most part – but he does have distinct limitations, ones that were particularly poor on Sunday, but which Panthers fan should be aware of when they assess his performance. For this weekend, he doesn’t need to be anything more than he was for the month when he went 4-0. The Titans offense isn’t as good as the 49ers one, and their pass rush lacks the same ferocity as well.

Allen needs to spend some more time before he can be considered a starting option long-term, either in Carolina or elsewhere, but for the time being, he has a job to do, and has played well enough to earn a backup role for the foreseeable future should it come to that. Some of these things Allen should easily be able to work on with time, though it is probably unlikely that he is ever able to reach the ceiling of his arm talent given the evidence so far – but he has been undeniably better than many expected.

He is, however, nowhere near the same level as a healthy Cam Newton, and when both are healthy this really shouldn’t – and likely won’t – be a hard decision for the Panthers’ coaches to make.