It’s rare that a punter gets a chance to be the hero.

But that was certainly the case when Panthers punter Johnny Hekker stepped onto the field with 27 seconds left and his team up one score looking to pin the Saints deep in order to preserve their first victory of the season – a desperately needed win for a team that hadn’t seen a win since November of last year. Facing fourth-and-one on the Saints side of the field, Matt Rhule trusted his punter to pin the Saints deep and make it as hard as possible on a New Orleans offense that had already scored two touchdowns in the fourth quarter.

And that’s exactly what Hekker did, bouncing the ball straight up inside the 10 before Stan Thomas-Oliver and Sam Franklin downed the ball at the one-yard line.

A walk-off home run. A buzzer-beating three. A penalty kick in stoppage time. The kind of thing you draw up in the backyard as a kid — only the punter version.

“That’s a pretty equitable reference,” grinned Hekker. “That’s pretty much as close as you can get to a nail in the coffin moment.”

Just like a quarterback can’t be successful without his receivers and running backs are quick to buy their offensive line gifts around the holidays, a punter needs the other 10 guys on the special teams squad to do their jobs – and do them well – to be a successful third unit.

“Punting production is a lot of group production,” said the NFL’s all-decade punter for the 2010’s. “I need gunners playing well [and] being in returners’ faces to force fair catches, being there to down balls, I need the line protecting for me and giving me a clean pocket to step into, JJ [Jansen] giving me a clean snap and Coach [Tabor] making the right calls.”

“I just get to reap the benefits for everyone else’s production.”

So it’s not enough to bounce it inside the five – you need gunners like Stan Thomas-Oliver and Sam Franklin to put their heels on the goal line and make it official.

“He has, like, bananas punts that can go anywhere,” said Thomas-Oliver. “It’s an aces moment because when it hits the ground you don’t know where it’s going to go. It’s kind of like a bomb hitting the ground – you’ve gotta be set and ready for the bounce like a baseball player or a goalie.”

“Downing it at the one is always awesome, especially a big game like that one.”

Hekker is a part of a special teams unit that is living up to it’s name – after two seasons of Matt Rhule saying that he wanted his team to win on special teams, to steal yards and points and possessions, that’s exactly what they’ve been doing through three games. Eddy Piñeiro hasn’t missed a field goal since being signed to replace the injured Zane Gonalez and is living up to the ‘Eddy Dinero’ moniker assigned to him in Chicago, defensive end Henry Anderson blocked the franchise’s first field goal since 2019 and the Panthers need every ounce of production from the other two units while their offense struggles. 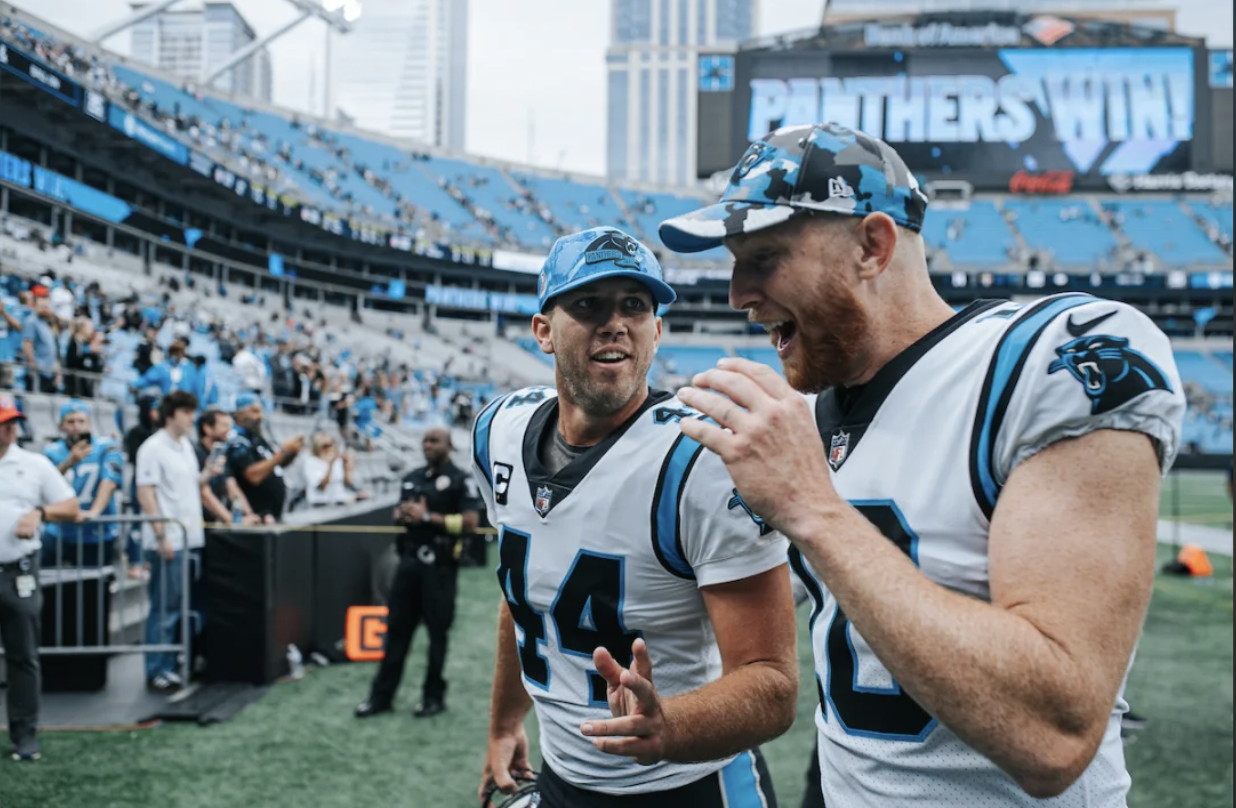 The Panthers are one of six teams to allow five touchdowns to their opponents in the first three games of the season, third-best in the NFL and Phil Snow says Hekker has been a big part of that.

“It’s unreal,” said Snow. “Last game, his punting was exceptional. He’s been a big part of our [defense].”

The past two weeks, Hekker has landed eight of his 11 punts inside the opponents’ 20-yard line. Snow wasn’t lying when he said exceptional – last week, it was four of six inside the 20 – the other two? The 21 and the 27.

Consider the field flipped. And the Panthers are hoping that the success of their special teams unit will help translate to success for the team, just like it did last Sunday. And even when the special teams falters, they’ll count on their defense to make up for it. The reverse will also be true – and while the offense struggles, it’s up to the other two to lift them up…that’s the kind of complementary football you hear about in all of the post-game press conferences.

But for now, the special teams is being special

Last year, the Panthers ranked 24th out of 32 teams in Football Outsiders’ Special Teams DVOA, an estimate of how many points, compared to league average, each team receives from the five elements of special teams. Through three games this season, they’re fifth.

“It’s a sign of a successful team. A lot of guys put pressure on their offense and defense to be the guys to carry the momentum throughout the game, but really there’s a huge transition phase,” said Hekker. “When you’re a team that’s aware of where your starting field position really affects your scoring percentages [and] understand that stuff and scratch and claw to gain those few yards…..it just makes guys that much more hungry to contribute and be a part of that special teams unit.”