Matt Paradis Excited To Be Leader In Carolina, “Ahead Of Schedule” in Recovery 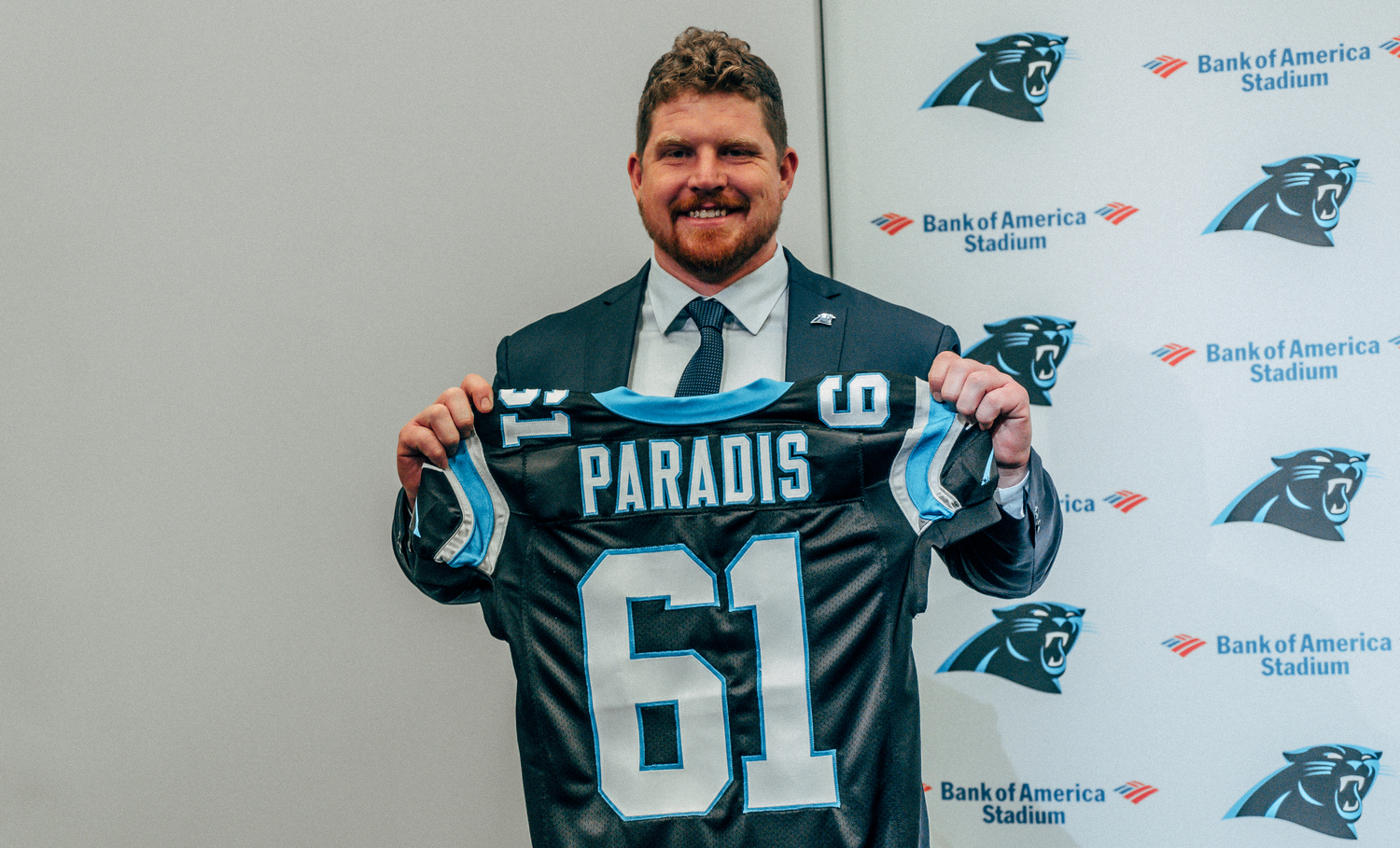 With the retirement of Ryan Kalil, there was always going to be a hole in the center of the Panthers’ offensive line heading into 2019 – but while the hole on the field was clear, what some may have underestimated was the hole the 33-year old Kalil, who started 145 games over a dozen seasons in a Carolina uniform and snapped the ball to both Jake Delhomme and Cam Newton, will be leaving in the locker room.

As the Panthers look to get younger and transition into the next era of what the team looks like – the 2019 Panthers will not have Thomas Davis, Julius Peppers, or Kalil in the locker room to provide veteran leadership and teach young players what it means to be an NFL player not just from a physical standpoint but from a mental and an emotional standpoint – they’ll need a new set of leaders to step forward. Some are on the team already, from Christian McCaffrey to Trai Turner to Luke Kuechly and others – but that Kalil-shaped void was still there.

To fill that hole, both on the field and in the locker room, the Panthers made their big splash in free agency when most thought they would be wading into the shallow end slowly by signing 29-year old former Broncos center Matt Paradis, who anchored the Denver offensive line for 57 straight games before breaking his fibula and missing the second half of the season in 2018.

While Paradis had two hip surgeries during the 2017 offseason to repair an issue that had bothered him since college, he was back on the field to start every game that season; he was cleared at the end of June and he was a full-go for training camp and the regular season – but the two recoveries aren’t exactly the same.

“This injury is a little bit more clean cut, it’s a broken bone,” said Paradis during his introductory press conference Thursday. “That hip deal, it’s a little bit more finicky, in my opinion. The broken bone is pretty clear cut, as far as the bones got to heal and you’ve got to build that strength and then once the strength is good, things move pretty quickly.” 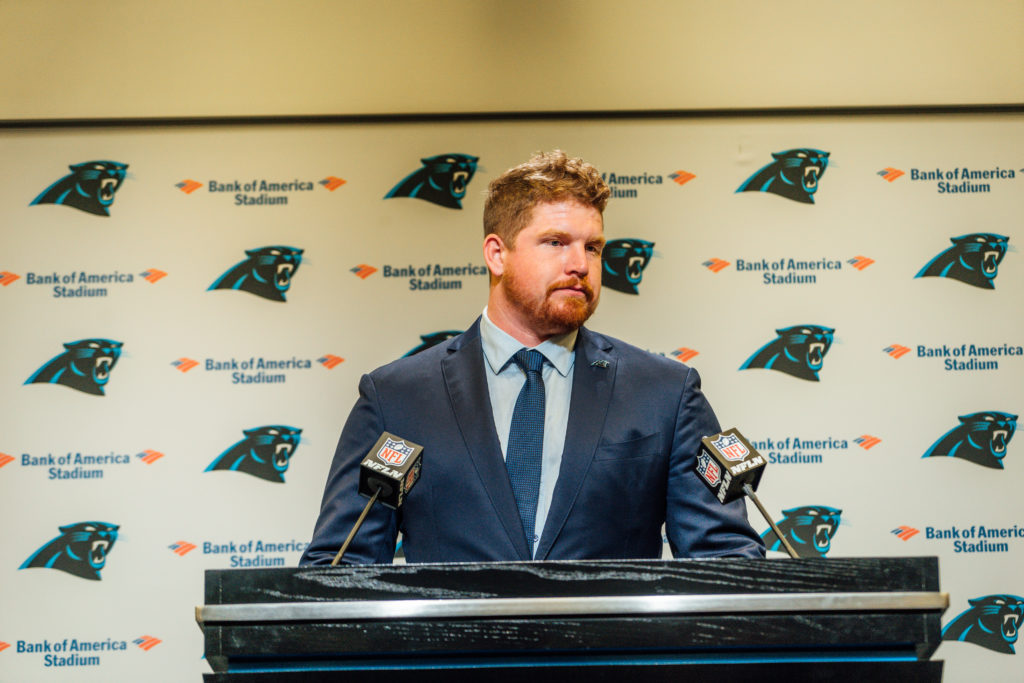 Paradis says he’s ahead of schedule on his recovery in a “steady forward progress” and should be ready for training camp, expecting to be fully cleared by June – he also says he not only understands who the Panthers want him to be, but embraces the role as leader both on and off the field – a role you don’t necessarily need to be in the league for a dozen years to secure, even though he did mention that he’d watched tape of Kalil and he tried to model his game after the Panthers franchise center.

“I think first and [the] most important thing is lead by example,” said Paradis. “You have to be putting that work in and people have to see that; I think that’s the most important and then after that, you’re playing the game of bringing everyone along with you and holding everyone accountable the right way – that doesn’t mean you’re yelling at people.”

“Leadership is a balance of bringing everyone up to that highest standard.”

The 6-3, 300 pound former sixth-round pick was ranked second by Pro Football Focus among centers in 2018 despite missing seven games after suffering the leg injury.

While there are still question marks on the offensive line, with the team re-signing Daryl Williams and both Matt Kalil and Taylor Moton on the roster, the team has three tackles – two of whom missed almost the entirety of the 2018 season; the questions of where these three puzzle pieces fit in, who plays on the left and who plays on the right – or whether one of them could possibly fit in at left guard – will be sorted out in Spartanburg in August.

EDIT: A few minutes after this story posted, Matt Kalil was released.

But the question of who will occupy the center spot, along with stalwart right guard Trai Turner, who has been selected to the Pro Bowl four straight seasons, has been answered – at least for the next three seasons.

While Paradis had multiple suitors – with rumors swirling that he was all but certain to sign with the New York Jets at one point during the helter-skelter 48 hour period of the legal tampering period – ultimately it was the lure of Carolina’s culture and continuity – Ron Rivera has the seventh-longest tenure among current NFL head coaches – that drew him to the Panthers.

“We decided the Panthers were the best fit with what I want in a team when it comes to winning and the culture and the continuity, so it was a no-brainer,” said Paradis. “That culture is a big deal and Carolina’s got it – they’ve always been a team that I think people have always respected.”

Paradis has come a long way from the eight-man football he used to play in Idaho where he played both guard and defensive tackle – from walking on at Boise State to the Broncos practice squad to a premier free agent signing filling the shoes of a franchise player – it was no surprise that the 29-year old who had just signed his first big contract was all smiles during his introduction to the Charlotte media.

“I came to the realization that I’ve never lived outside of the mountain time zone for any serious amount of time, so I’m excited to get over here,” grinned Paradis. “We’ve heard nothing but amazing things about Charlotte and I’m excited to be here.”