The Quadruple Option: A Panthers Peculiarity 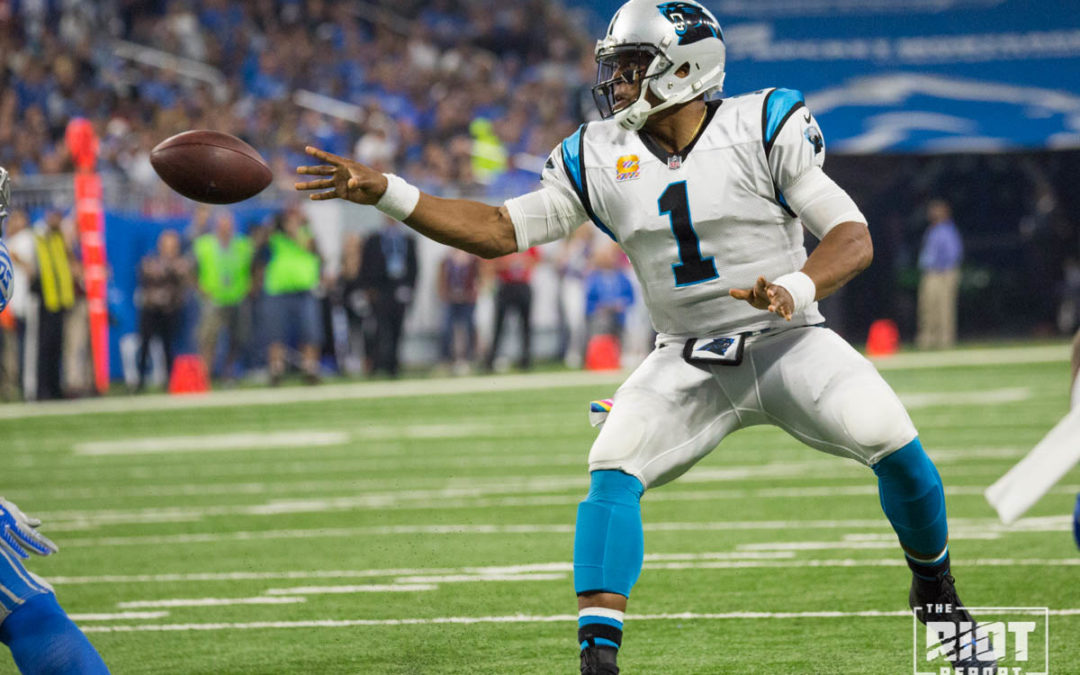 Evolution is a strange and messy business; while the general trend is one of improvement and refinement, it has a habit of mixing that in with some pure, unabashed weirdness. In the animal world, this means that while evolution led to the crocodile, the near-perfect killing machine, it also led to the Platypus, an animal so bizarre that early settlers in Australia believed it to be a hoax. There has been a lot of talk about the supposed evolution of the Panthers’ offense this season and, as should be expected, this evolution has it’s own versions of the platypus; Sunday’s quadruple-option pitch touchdown is one such freak. 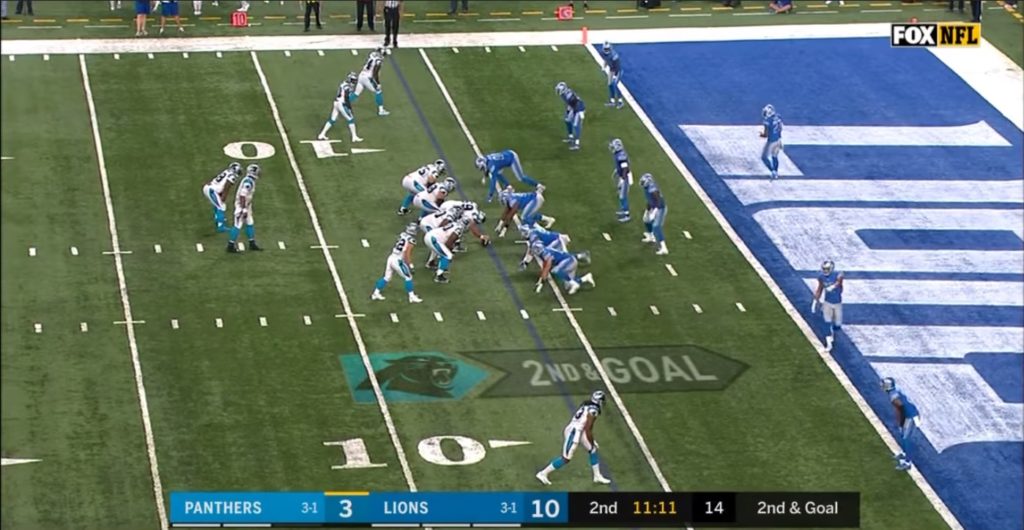 Generally, defenses look to substitute and call plays based on offensive personnel, which is why the grouping the Panthers go with on this play has so much potential. Formally, this is a 21 personnel look, with Stewart and McCaffrey the two running backs and Dickson the tight end. However, both McCaffrey and Samuel can interchange between running back and receiver so this grouping could actually be regarded as 11, 21 or 31 personnel; all of which are defended very differently. Additionally, by splitting Dickson out wide, they are in effect showing a 10 personnel formation from what could be considered a 31 personnel grouping, making it very hard for the defense to adapt. Confused yet?

The way the Lions look to defend this is with a two-high safety formation, with the two linebackers presumably accounting for Newton and Stewart and the near-side safety formally assigned to McCaffrey. Had the Panthers looked to run the standard triple-option shovel from this formation it would likely have been unsuccessful as the near-side safety would have seen McCaffrey motion across and come down to either break the pass up or, more likely, tackle him short of the goal line. The resulting touchdown was likely only possible because of the jet-fake fourth option.

The Motion of the Ocean

Almost every play in the NFL involves reads, which can largely be classified as pre-snap or post-snap. This play looks to have both, with the jet-option being a pre-snap determination by Newton based upon the defensive formation. As mentioned earlier, the Lions formation is effectively one with two ‘high’ safeties. This means that they are able to defend the boundaries reasonably effectively, and so any jet sweep to the near side would run the risk of being cut-off by the near-side safety. Had the Lions adopted a 4-2-5 look, with only one high safety and seven defenders in the box, this might well have been a simple jet sweep with Samuel being trusted to win a leg race with the near-side box defender.

With that in mind, the purpose of the motion here is not a post-snap read by Newton, but rather a mechanism to force the defense to re-align and to create hesitation from the near-side linebacker. As Samuel motions across, the responsibilities on defense change; the safety originally covering Samuel now becomes responsible for Stewart, the linebackers are now responsible for Newton and McCaffrey respectively and the safety is tasked with covering Samuel should the Panthers look to pass. The second benefit of running Samuel on the jet-fake is that it causes McCaffrey’s defender; the near-side linebacker; to hesitate momentarily, as can be seen below:

While this isn’t a significant enough hesitation for him to be unable to recover and make the tackle, it provides enough time for Matt Kalil to first crash down on the tackle before getting in place to cut him off. Turner, Larsen and Norwell are then tasked with ‘crashing’ the defensive line to the near side and Williams is able to prevent the near-side end from blowing the play up from the back side. However, Kalil’s block is the key. 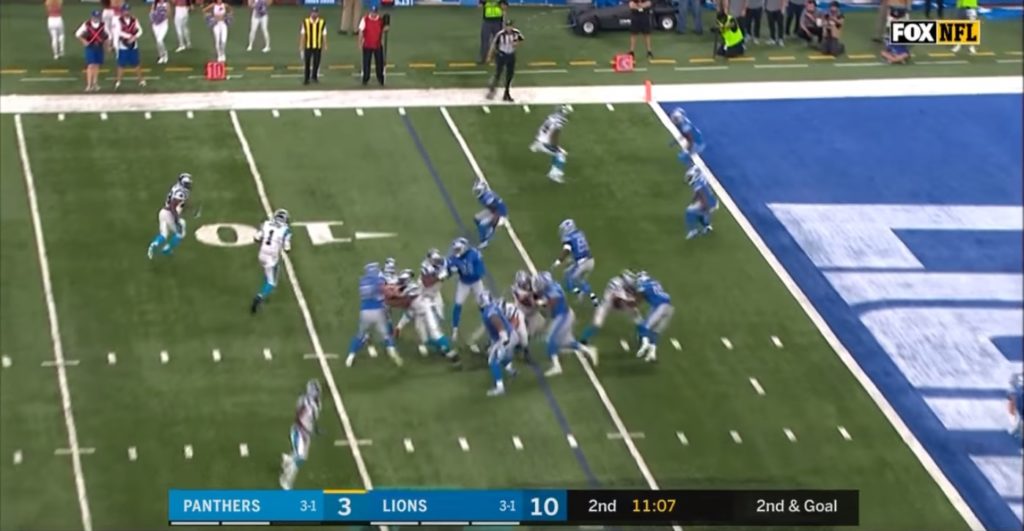 As can be seen in the above image, by sealing off the near-side linebacker the Panthers have in effect created a four-on-four opportunity on the far side. Though, as Dickson is tasked with blocking the outside-most defender, it could reasonably be regarded as a three-on-three situation. What is unusual about this particular situation is that none of the far-side defenders have recognized McCaffrey sliding across underneath from the far side. They still believe it to be a three-on-two situation in favor of the defense, and are pursuing as such.

While this play was certainly aided by the Lions failure to recognize the shovel-option, by running the multiple options the Panthers have managed to create a situation where the far safety is still deep and flat-footed as the read is made. What this means is that even if the two ‘down’ defenders had recognized the shovel and moved inside to take away the shovel and QB-keepers, the safety would still have been hard-pushed to stop the toss to Stewart from resulting in a touchdown.

What actually happened is that the Lions didn’t recognize the shovel-option and so pursued to the outside in order to stop what they perceived to be a speed-option run. Even at the moment Newton releases the ball, the three defenders still have their attentions fully on the speed-option: 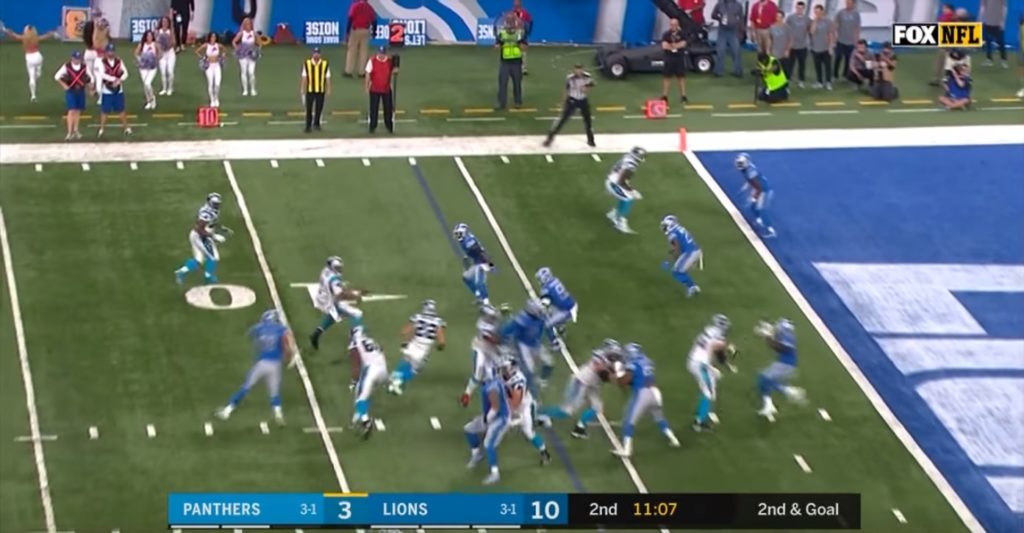 This allows McCaffrey to simply saunter into the endzone untouched.

This play is unlikely to work quite so effortlessly every time, and is also unlikely to become a staple of the red zone offense in the exact form that was used against the Lions. However, plays like this are Mike Shula at his very best, using motions to force a defense out of position with simple reads to generate a high success rate. The real value of McCaffrey and Samuel will be in their ability to move the chains with consistency due to good route running and ability after the catch; plays like this are just the icing on the cake.

After all, who doesn’t love a platypus.