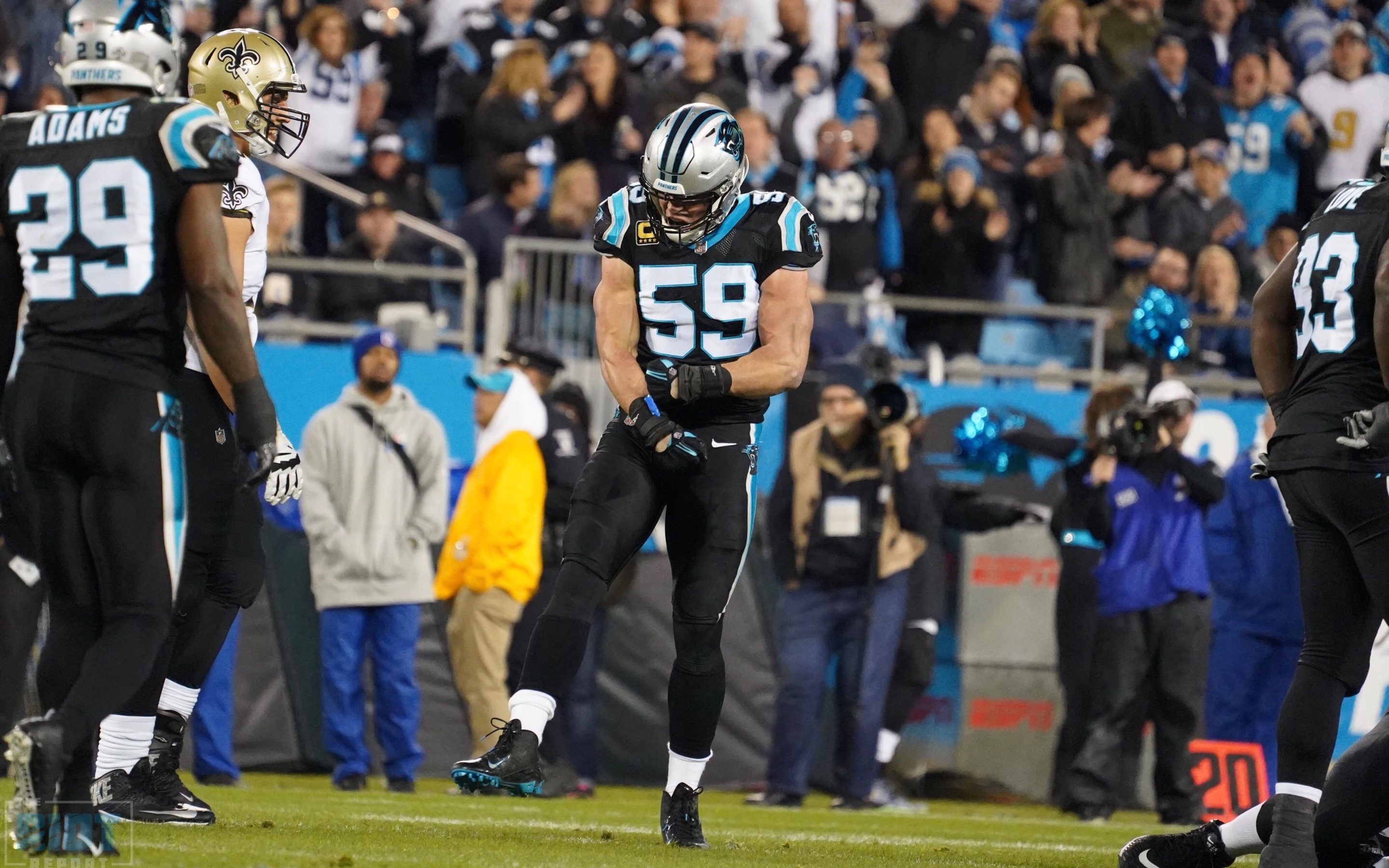 The Panthers needed a huge play from a defense that had held the Saints in check all night on Monday Night Football, even after being on the field for more than 35 minutes of game time, to give themselves a final chance at a playoff run – but even when they got one, it wasn’t enough.

Even after James Bradberry forced a Tommylee Lewis fumble out of the end zone with 1:44 left in the game to give the ball back to the Panthers and the team a last gasp at playoff contention, the Panthers short passing game that faltered due to Cam Newton’s inaccuracy – he was 3-for-7 for only 19 yards on the final drive, including passes to Curtis Samuel and Ian Thomas that fell incomplete – added up to a Panthers loss in which the defense held up it’s end of the bargain but the offense could not as Carolina dropped it’s sixth straight game 12-9 to the New Orleans Saints to fall to 6-8 on the season and all but eliminate itself from the playoff picture.

We knew the Panthers offense flowed through Christian McCaffrey.

Perhaps we underestimated how much.

Christian McCaffrey tossed a 50-yard touchdown pass on fourth-and-two on the Panthers second drive of the game to blocking tight end Chris Manhertz – it was only the former college basketball forward’s second catch of the season and fifth of his career and nearly tripled his receiving yardage – to put the Panthers ahead early in the first quarter. After the Saints stopped DJ Moore two yards short of the first down at midfield, Riverboat Ron made his first appearance of the night and offensive coordinator dialed up a halfback toss to a wide open Manhertz, who caught the floater and rumbled 40 yards untouched for the first score of the night. 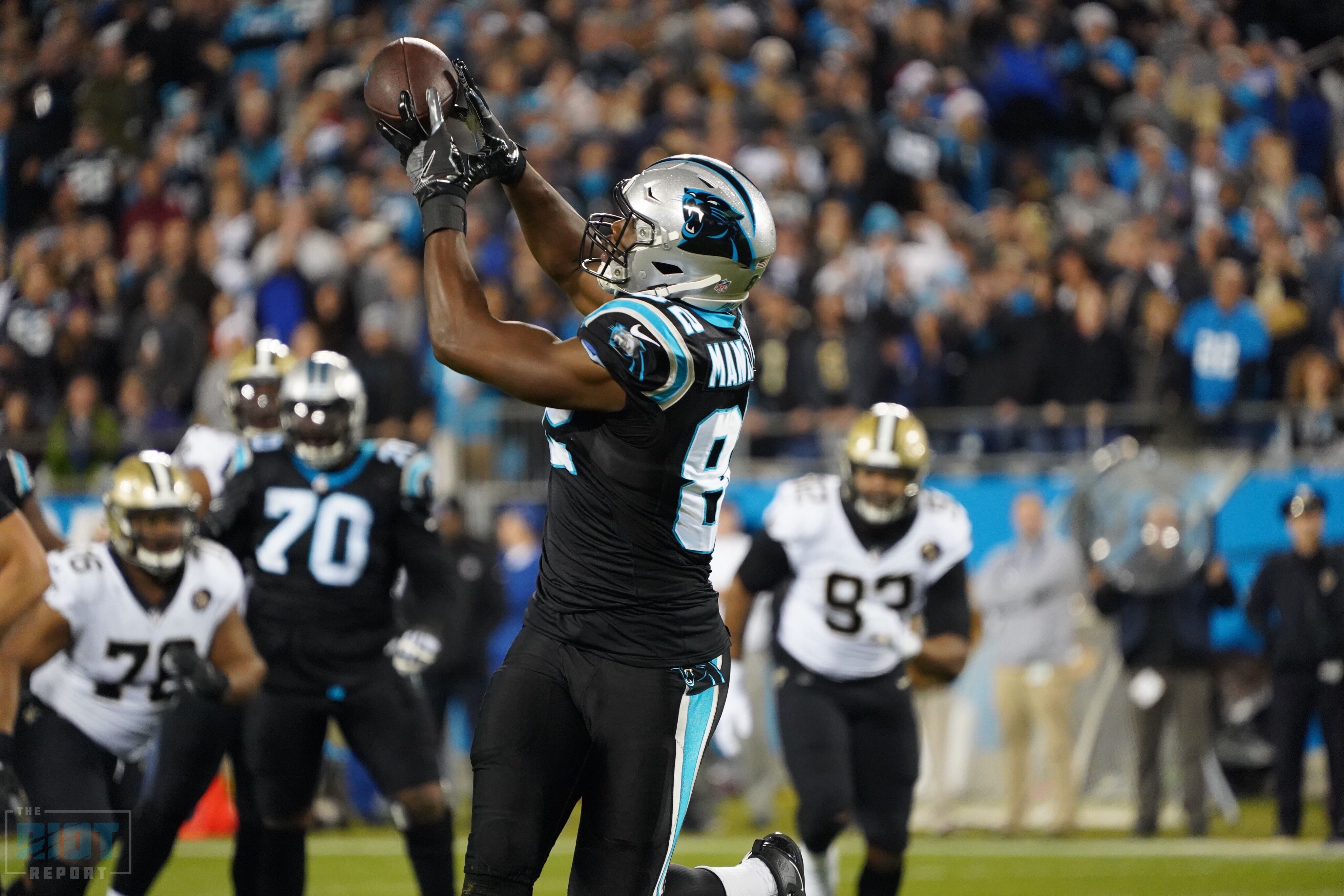 It was enough to keep the Panthers ahead in the first half as the offense struggled for much of the first two frames – when McCaffrey wasn’t throwing the ball, of course – as the Saints defense held the Panthers to only 63 yards on their first 26 non-McCaffrey-pass plays – it would be up to their defense to keep them in the game against the #2 scoring offense in the NFL.

And they certainly did.

With Drew Brees and the Saints’ offense coming in averaging 34.4 points per game, the Panthers held the Saints to only six points on five drives; the Panthers used a combination of good defense on third down – the Saints came in fifth-best in the NFL on third down and the Panthers held them to 3-of-7 in the first half – and bend-don’t break defense as the Saints drove inside the red zone but were ultimately turned away; Eric Reid’s open-field tackle on shifty running back Alvin Kamara likely saved a second-quarter touchdown that ended in a Saints field goal to pull them within 7-6.

Reid would finish with seven combined tackles and Kamara, who entered the game with almost 1,400 total yards and 15 touchdowns on the season, would end the night with 103 total yards on 21 touches.

The Panthers also produced their first interception since Week 9 as the Saints attempted to put up points before halftime – Thomas Davis would shove tight end Dan Arnold to jar the ball loose and it hung in the air for a split-second before falling into James Bradberry’s hands; after Bradberry pulled in his first pick since Week 14 of 2017 and returned it 29 yards to the Saints 42-yard line, the Panthers took over with 1:46 left in the half and all three of their timeouts; with the Saints set to receive the second half kickoff, the Panthers needed to put up points.

Instead, a meandering six-play, 29 yard drive that took 1:34 of the 1:46 would end on a Cam Newton interception as he targeted Devin Funchess for his only target of the game – the underthrown ball was picked off by Eli Apple and the Panthers went into halftime up 7-6 instead of extending their lead. Funchess has been targeted four times in the past two weeks and those throws have resulted in zero catches and two interceptions

The Panthers, after scoring 49 points in the final two minutes of first halves in 2017, have scored only nine through 15 games this season.

Newton struggled for much of the day, looking inaccurate on multiple throws – the shoulder soreness that has plagued the quarterback since Week 7 at Philadelphia reared it’s ugly head on multiple throws, including the interception; Newton would finish 16-of-29 for only 131 yards and an interception, by far his worst stat line of the season.

The 29-year old QB, who had shoulder surgery in March of 2017, said after the game that he did not know what was wrong with his shoulder and that he’d been experiencing the same soreness since Week 7 with no change, no matter what the treatment. 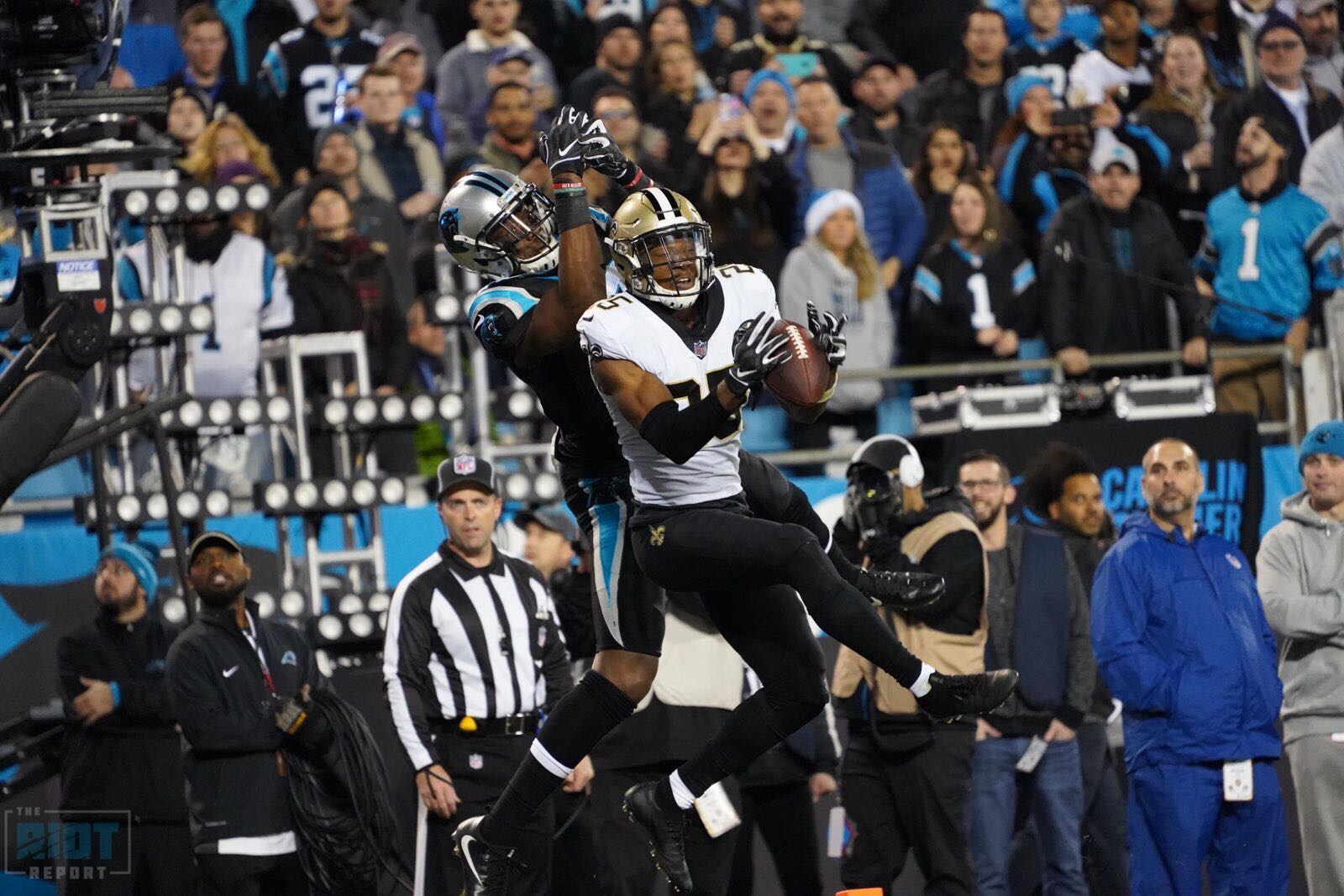 Rookie cornerback Donte Jackson intercepted Drew Brees’ two-point conversion attempt and raced 98 yards the other way for the first pick-two in Panthers franchise history to keep the Panthers within a field goal at 12-9.

But the Panthers anemic offense – between Newton’s inaccuracy and the offensive line allowing four sacks and picking up three key holding penalties not opening holes for McCaffrey, who had only 53 yards rushing – couldn’t do enough to outscore the Saints and they finally wore down the Panthers defense. The Saints got the ball back with 8:51 left up by three and didn’t gave it back to the Panthers until there was 1:44 left on the clock on the Hill fumble; the Panthers couldn’t make a fourth-and-1 stop inside the red zone and allowed the Saints to force the Panthers to use all of their timeouts, including a curious one called by Ron Rivera ahead of the fourth-and-1 carry by Alvin Kamara that picked up the first down; Thomas Davis had a chance to make the tackle in the backfield, but couldn’t bring down the shifty runner.

A missed opportunity, to be sure.

At 6-8 and now 1.5 games behind Minnesota for the final playoff spot with two games to play, the Panther are all but eliminated from the playoffs.