Nine Plays That Mattered As The Panthers Fall To The Saints 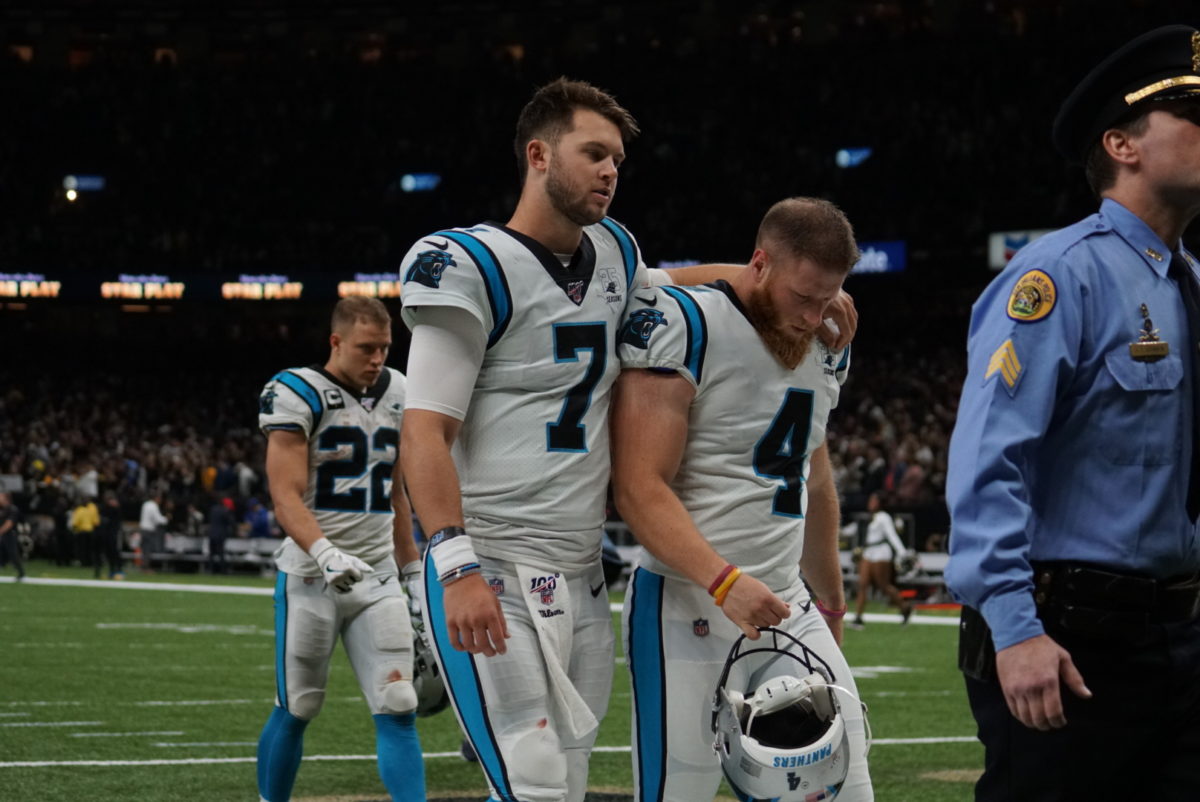 The Panthers had a chance to beat the Saints – in fact, they had multiple chances as Kyle Allen continued his excellent play at the Superdome, throwing for 256 yards and three touchdowns, Christian McCaffrey had his typical two-score day and DJ Moore had his third 100-yard performance in four games, but mistakes on special teams – three missed kicks and a muffed punt that resulted in a Saints touchdown – and an inability to stop Drew Brees in key situations cost the Panthers the win as they fell 34-31 to the Saints in New Orleans and likely ended their playoff chances; at 5-6, they are four games behind the Saints and three games out of the Wild Card.

Here’s how it happened.

Deja Voodoo All Over Again 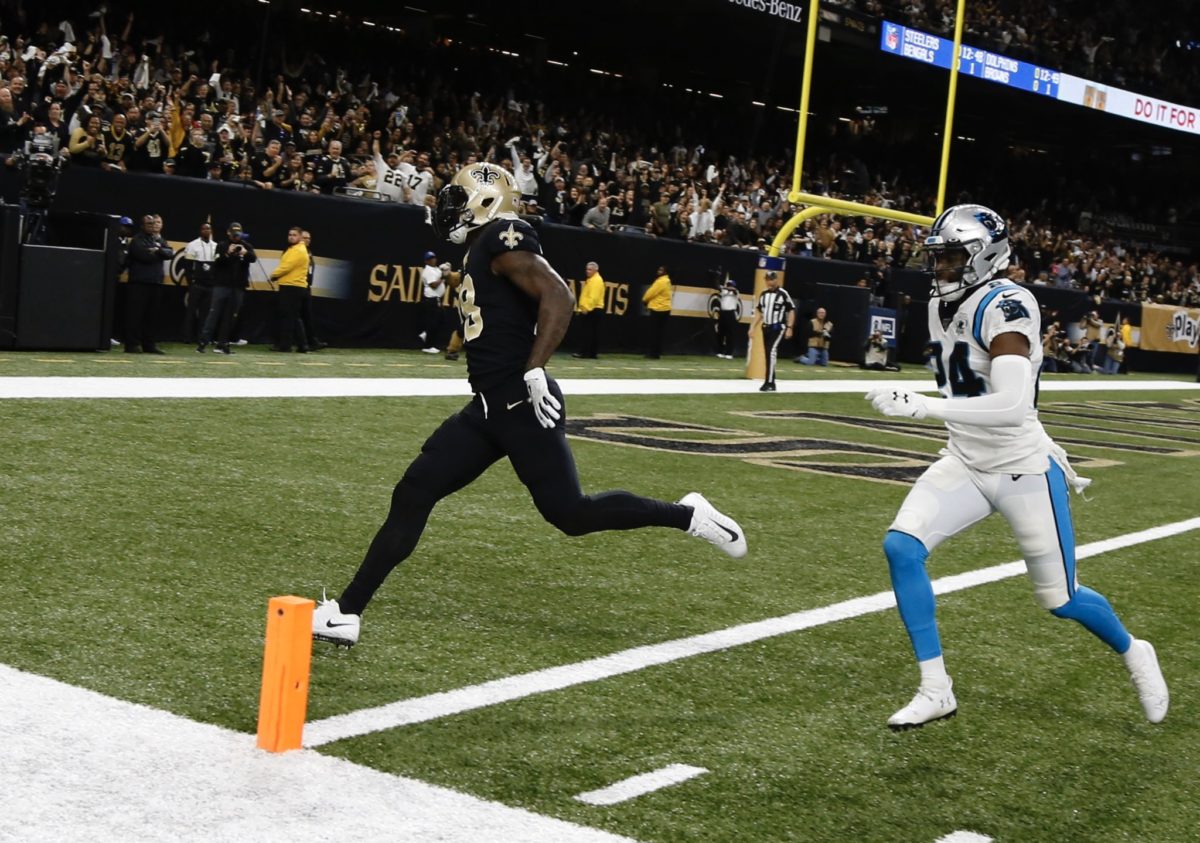 In an absolute must-win game to keep their season alive, the Panthers won the toss – something they’d only done twice this season – and kicked off to Drew Brees and the Saints, who promptly went 75 yards on seven plays for the opening score.

The Panthers were 1-4 when their opponent scored first this season entering the game and their pass rush didn’t help them out to get off the field on a key third-and-11 near midfield as Drew Brees faced absolutely no pressure in the pocket, allowing him to survey the field for seven seconds – while he read the field, Ted Ginn, Jr. crossed from the left side of the field to the right sidelines and caught a 30-yard pass in front of Eric Reid to convert the third down and put them into Panthers territory.

A play later, Latavius Murray would go off left guard 26 yards untouched to the end zone, the Saints first score on an opening drive in 17 weeks.

After punting the ball back to the Saints with a 7-0 lead, the Panthers defense needed a stop and they got one, but not without controversy; on 3rd-and-4, Brees completed a 42-yard pass to Jared Cook to the Panthers 29-yard-line. However, an offensive pass interference call on Cook – that Sean Payton challenged and predictably lost – brought the ball back to the Saints 19-yard-line; after a stop on third down, it appeared the Panthers were going to get the ball back, but as D.J. Moore was trying to catch the punt, the ball hit S Rashaan Gaulden on the right calf as he and Saints DB Justin Hardee, Sr were tangled up coming down the field and the Saints recovered.

After a four-play, 27-yard drive, the Saints found the end zone again as Brees threw a 13-yard pass to Tre’Quan Smith to make the score 14-0 early in the first quarter – the Panthers secondary bit hard on play-action and Smith was wide open. The Panthers had run just three offensive plays and the team was already down 14-0.

Down 14 points early in the first half, the Panthers needed to respond with a score before things got out of hand in the Superdome. After running just three plays on their first offensive possession, it only took four more for the Panthers to find the end zone.

Allen completed a 49-yard touchdown pass to Moore to get Carolina on the board as Moore got behind P.J. Williams, who was subbing for an injured Marshon Lattimore – Allen had left some opportunities for deep shots on the field as he struggled with inaccuracy downfield this season, but his arm was true in the place where he made his first start in Week 17 of 2018. After a Joey Slye miss on the extra point, the Panthers cut the lead down 14-6 with a little more than three minutes before the end of the first quarter.

Cam Jordan…. what are you doing?

15-yard penalty on Jordan for this. No ejection. pic.twitter.com/uV6HjRwlJz

With the Panthers facing a third-and-long inside their own 40-yard line after trading field goals with the Saints in the second quarter, Saints linebacker Demario Davis came up the middle and sacked Kyle Allen – the second straight sack by the Saints defense as they appeared to force a Panthers punt. But defensive end Cameron Jordan, who had the sixth-most sacks in the NFL entering Week 12, came in after the fact and gave a forearm shiver to a prone Allen, resulting in a 15-yard penalty for unsportsmanlike conduct. Instead of punting, the Panthers would hold the ball for the rest of the first half as Allen used a steady supply of dinks-and-dunks to Christian McCaffrey to matriculate down the field, eventually ending their 17-play, 68-yard drive in the end zone.

McCaffrey, who last week set the record for most receptions by a running back in their first three seasons, had 133 total yards on the day, including eight receptions on eight targets and 77 total yards in the first half.

McCaffrey appeared to score a touchdown with two seconds left in the half on a nine-yard pass from Allen, but that call was overturned and Ron Rivera decided to eschew the field goal, instead going for the score with only one play remaining before halftime. And they would make it count.

The Riverboat Pays Off

After the Panthers called timeout to have one last play before halftime, Panthers lined up in a run-heavy formation with Dennis Daley as an additional tackle on the right side of the line, but instead of handing the ball off to McCaffrey, Allen, off play-action to fullback Alex Armah, completed the one-yard pass to the left side to a wide open McCaffrey for the Panthers touchdown to cut the lead down to 17-15; the Saints had excellent coverage on the two-point conversion and Allen threw incomplete to DJ Moore, who suffered a left elbow injury on the play.

Moore, who finished with six catches for 126 yards, would reenter the game after halftime with a sleeve on the elbow.

Rivera showed the team he had the confidence to get the touchdown, even after the team had been stuff twice near the goalline earlier this season – in Week 2 against Tampa Bay and two weeks ago in Green Bay. After being down 14-0 after halftime, the Panthers offense and defense played well in the second quarter – the Saints had zero first downs and only five yards in the second frame – when the game could have gotten away from them early. 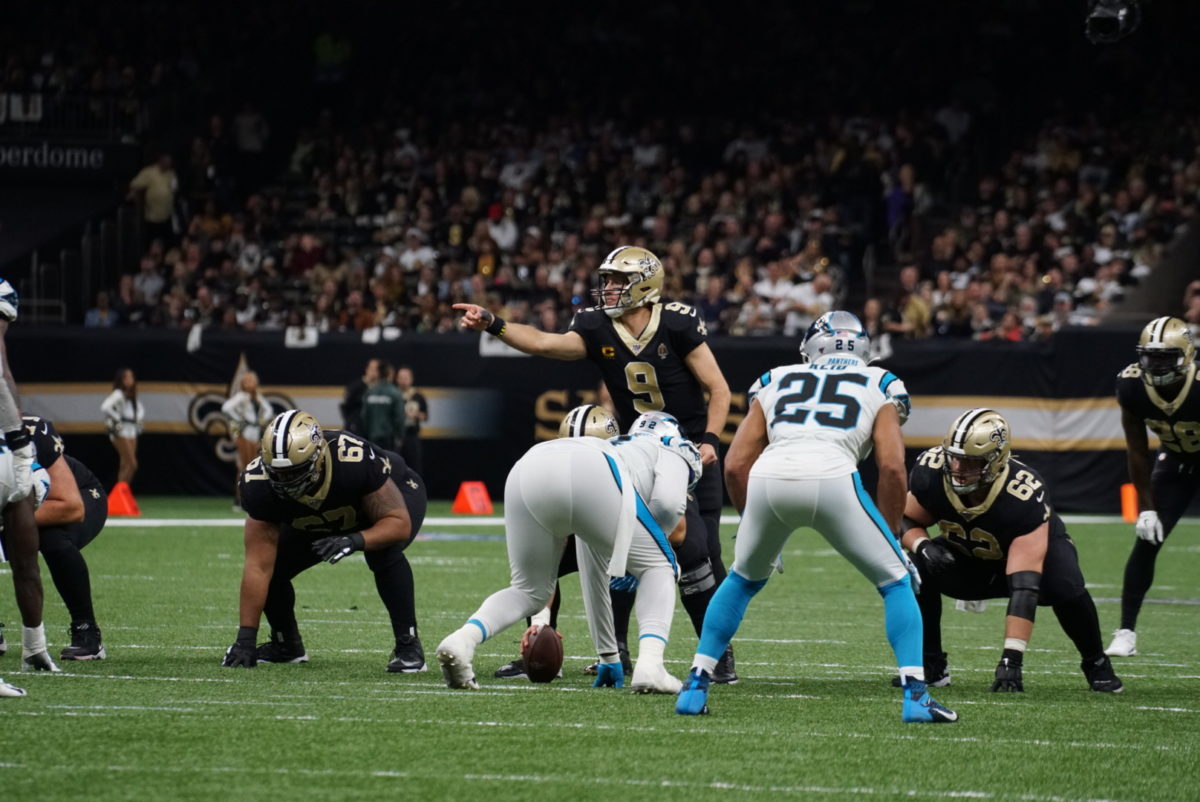 After only five yards and zero first downs in the first half, the Saints came out firing in the second half – after a three-and-out by the Panthers, the Saints stormed back with a six-play, 62-yard drive that finished with a 20-yard touchdown catch by Jared Cook as he got behind Eric Reid in the end zone. Brees, who had only three incompletions through three quarters, was aided by a 15-yard penalty on Tre Boston for a helmet-to-helmet unnecessary roughness penalty on an incompletion to Ted Ginn, Jr.

After a Joey Slye 52-yard field goal – his sixth from over 50 yards of the season – the Saints went right back to the well as they needed only six plays to go 75 yards, including a 30-yard run by Alvin Kamara that brought the Saints inside the five that led to a Michael Thomas touchdown.

After only five net yards and zero completions in the second quarter, Brees was 7-for-7 in the third quarter; Kamara, who had only one yard at halftime, finished with 102 total yards.

The Panthers trailed 31-18 and needed an answer. 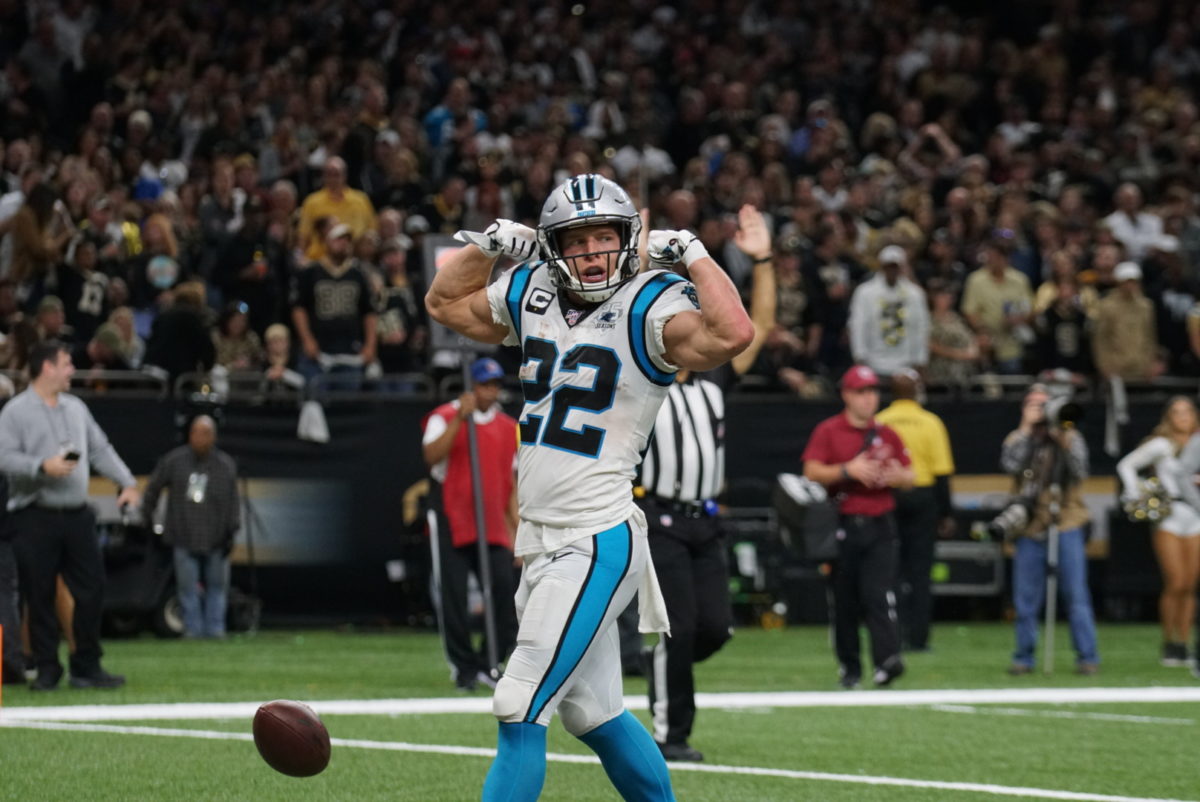 On the second play of the ensuing drive, the Panthers had their answer as Allen completed a long 52-yard pass to Moore for a Panthers first down on the Saints 20 – Moore caught the ball seventeen yards downfield, pivoted and raced up the right sidelines for 35 more.

Four plays later, McCaffrey juked safety Vonn Bell for his second touchdown on the day – the first on the ground – to make the score 31-24. 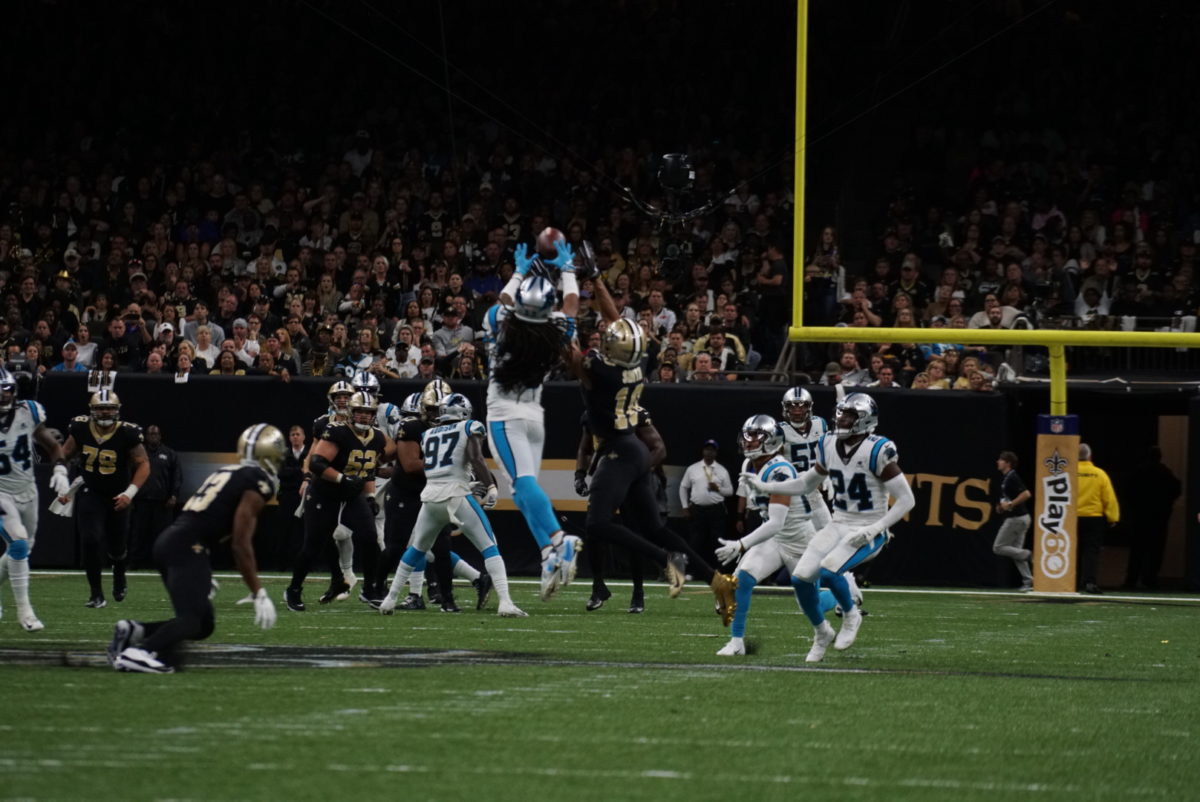 Entering New Orleans, the Panthers had 17 takeaways in their five wins and only two in their five losses – they hadn’t had one in two weeks.

Beginning the fourth quarter, Tre Boston went and got a big one as he picked off a pass over the middle and the Panthers used a key pass interference penalty to tie the game at 31. After a deep ball to Curtis Samuel in the back of the end zone that saw Allen do a nice job of stepping up in the pocket and putting the ball where his receiver could go and get it resulted in a pass interference call, the Panthers were stuffed on three attempts from the one-yard line.

And then Allen, who has had two of the best games of his young career in the Superdome over the past two seasons, showed more poise in the pocket and found DJ Moore in the middle of the end zone on fourth down for the tying score and the second-year wideout’s second score of the day to tie the game at 31.

Sometimes You Gamble And Both Sides Lose

On a critical 4th-and-1 on their own side of the field, Saints head coach Sean Payton decided to go for it, much like he did earlier in the game from his own 34 in the first half – only this time, instead of a holding call negating a first down, Eric Reid knifed into the backfield for a tackle for loss and the Panthers would take over on the Saints’ 45-yard line with just under seven minutes left.

Then the fireworks began. 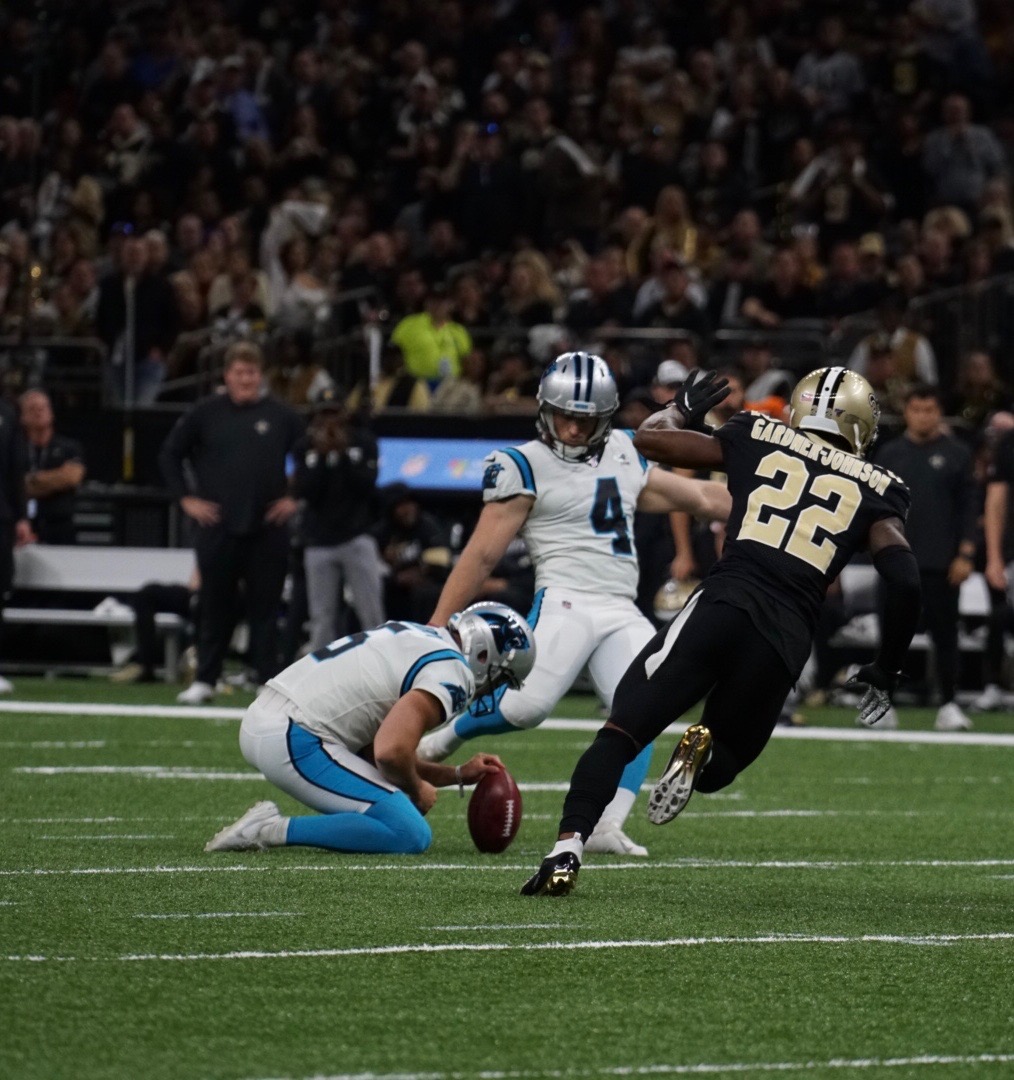 Slye, who had missed two extra points already but had made a 52-yarder earlier, pushed it wide right – a flag for defensive holding was picked up after refs disagreed whether the Saints pulled or pushed long snapper JJ Jansen to the ground – pushing is legal and pulling is not.

“The obvious statement is that the loss, I feel like, is on me,” said Slye after the game. “I take ownership of that.”

The Panthers still had a chance with a tie game and 1:56 left, but Drew Brees efficiently drove the Saints 65 yards and Will Lutz kicked a 33-yard field goal as time expired to win the game for the Saints 34-31 and drop the Panthers record to 5-6 on the season.