No Pressure: Tahir Whitehead Learning From Luke Kuechly, Not Trying To Be Him 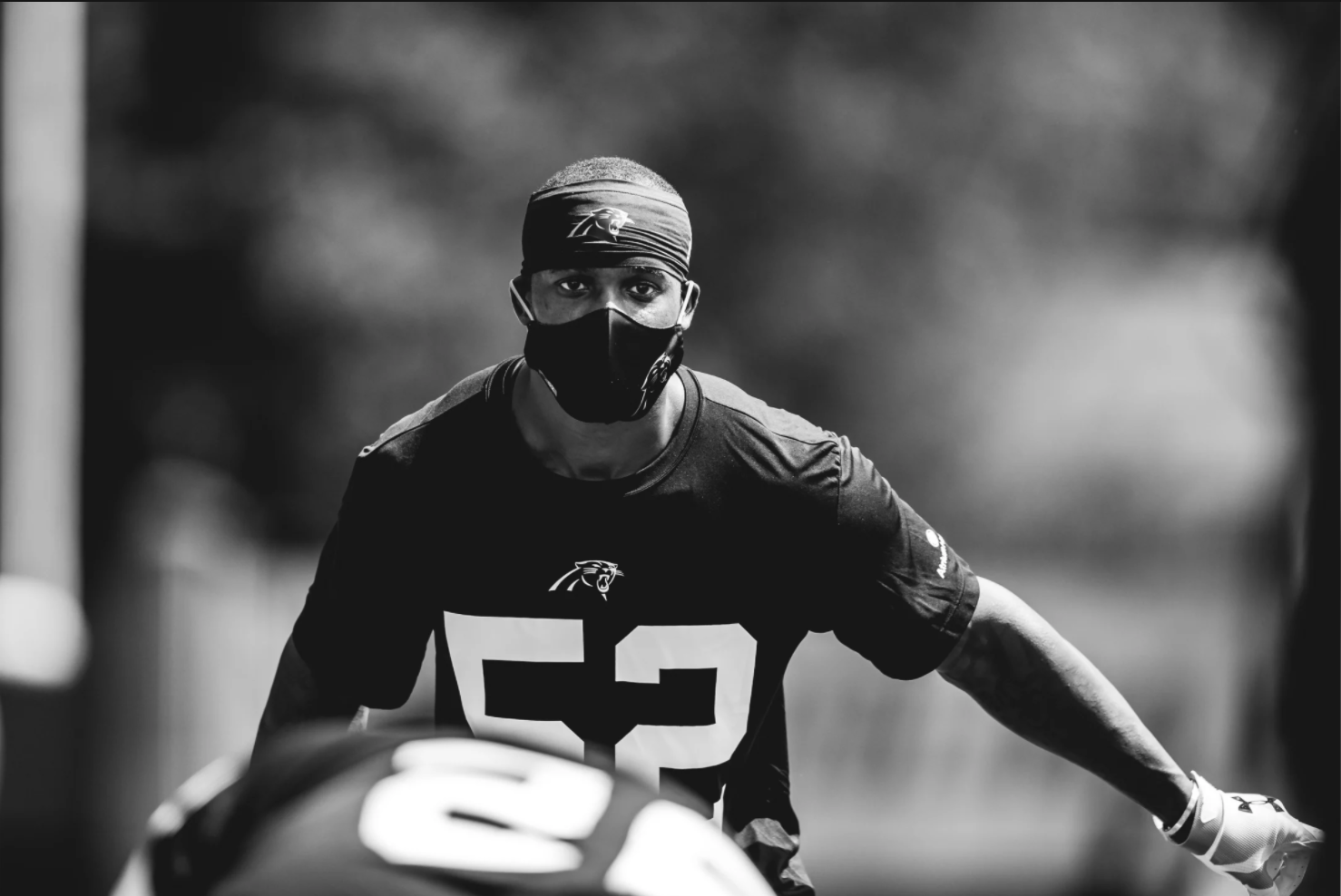 Imagine being the next man up after a former NFL Defensive Player of the Year, a seven-time Pro Bowler, a five-time first-team All-Pro linebacker that is one of the most recognizable faces in the history of a young franchise.

That’s the task that awaits Tahir Whitehead in 2020.

While no one expects Whitehead to come in and be the same linebacker that Luke Kuechly was for eight seasons with the Carolina Panthers, the former Raider will be playing in his former MIKE linebacker spot in the middle of the Panthers defense. For eight years, that position was one of the least concerning spots for the Panthers. Now, it could be one of the most scrutinized – not because of who Whitehead is, but because of who he’s replacing.

“I wouldn’t say pressure. At the end of the day, I’m always hypercritical of myself,” Whitehead said on Thursday’s Zoom conference call with the media. “I always say I’m my biggest critic. I’m always looking for ways to improve my game and I go out there and do any and everything to help my team. That’s how I always approached the game, and that’s how I always will approach the game.”

“I’ve been playing since I was nine, you’re talking about 21 years of football now up to this point. I would say I’ve got my PH.D. in the sport.”

Unlike Kuechly who excelled at most every aspect of the game, Whitehead’s strength is more focused on stopping the run and pass-rushing situations while he struggles in pass coverage – according to Pro Football Reference, Whitehead was targeted 65 time and the opposition connected on 51 of said throws — that’s a 78.5% completion rate — for 687 yards and six touchdowns last season.

To help him improve, Whitehead has been leaning on the newest Panthers pro scout for tips about his game and the team’s defense.

“He’s a great dude, and he is open and willing to always sit down and break down film when he is out on the field,” said Whitehead about Kuechly. “I will ask him what he thought about certain things and what is he looking at when is dissecting runs and passes. I would be a fool not to take advantage of the fact that he’s still around.”

“It’s just small talk right now as far as seeing the level of the back, the formation and things like that – the telltale signs of what play you’re going to get.” 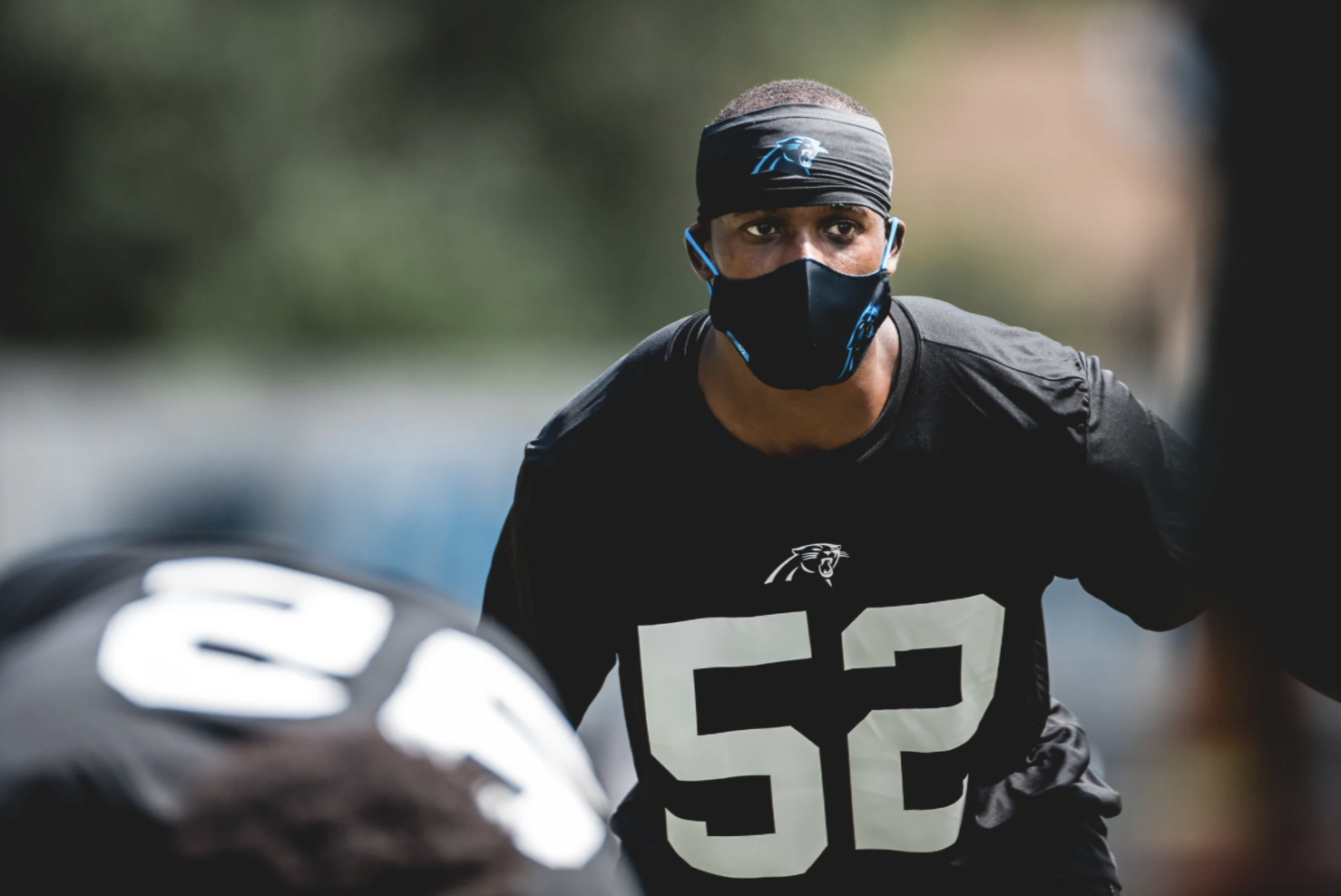 Whitehead isn’t just trying to become an impact player on the field in Carolina, but also off the field as he has been helping some of the younger Panthers players improve their game – Whitehead is one of only two players not in their twenties on a Panthers defense that is having to deal with not having OTAs or mini-camp this spring, now only a month removed from the regular season.

“It’s just helping them with a few things after practice,” Whitehead said. “Not rushing off the practice field and understanding that we have to make up for lost time. They’re coming in like a deer in the headlights, eyes wide open, not understanding what’s going on. But I take it seriously being the veteran, a leader who can put their mind at ease and help them understand this is not your first year playing football.”

He also isn’t too much of a snob to take advantage of the advice that may come back his way.

“I’m open-minded enough to take pointers from them. I’m always eager to learn from others as well, so I will ask them questions like what [they] thought about this,” Whitehead said. “Just enough to make the team feel comfortable to speak on certain things and not just let guys make mistakes. Ask me questions – and I leave the floor open. I don’t care if this is Year Nine or my rookie year.”

As his former coach Jim Caldwell used to say – a good idea holds no rank.

For now, the Panthers will have to get used to playing football again – because the regular season is bearing down on them.

“That’s the only way you can get into football shape by actually going out there and playing football,” Whitehead said. “So the way we are kind of easing into it, especially not having preseason games, it’s a lot of one-on-one, it’s a lot of individuals, it’s a lot of coaching and coaches are really detailing everything – it has been beneficial for everyone.”