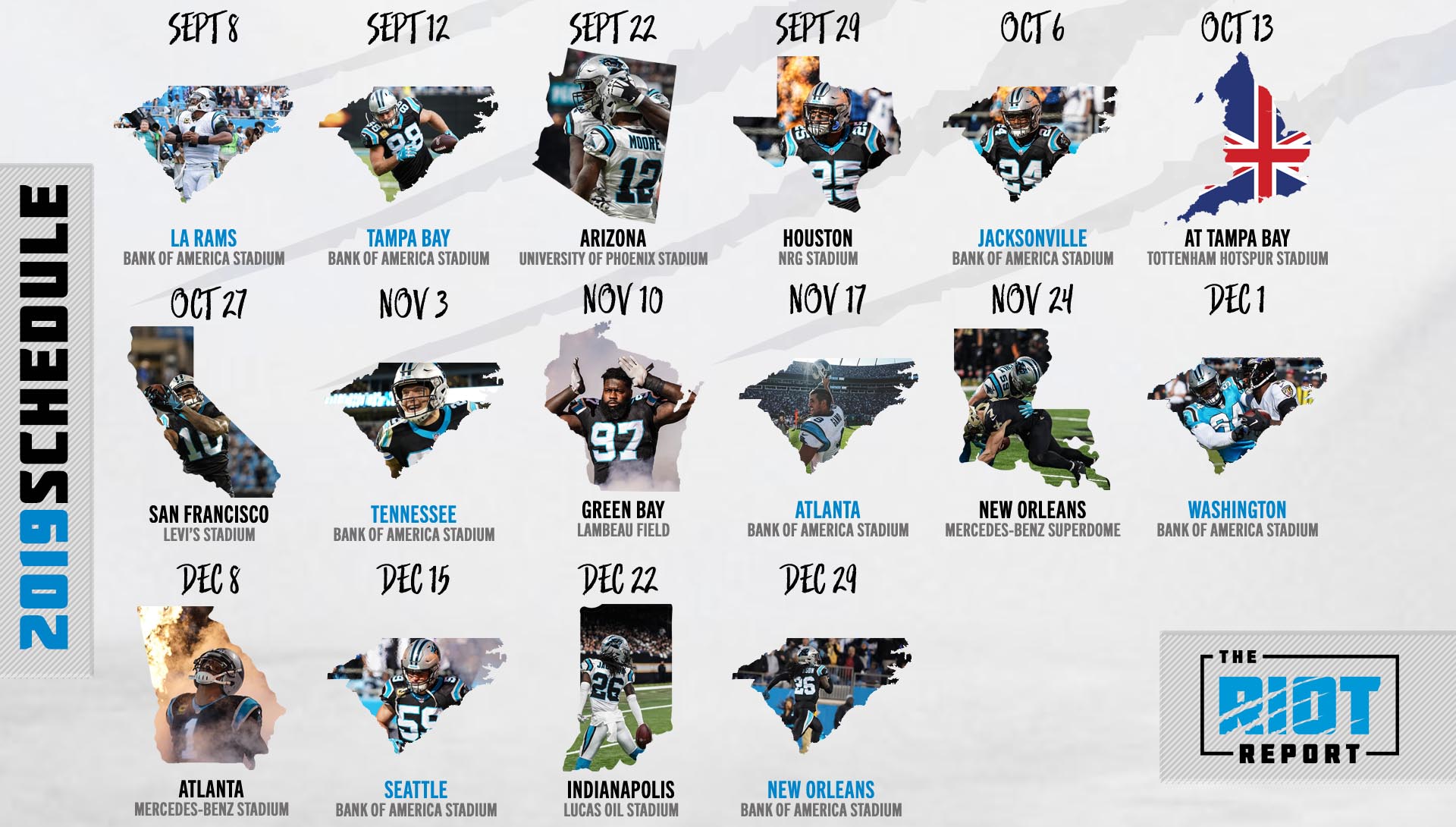 The Carolina Panthers 2018 schedule was all about staying close to home.

In 2019, they’ll be venturing a little farther – make that much farther – as a Panthers schedule that saw just over 4,000 miles worth of road trips last season has elongated into multiple long journeys, including across the pond and to the west coast, in 2019.

While the opponents have been known since the end of last season, the 2019 schedule was revealed in spectacular fashion by the Panthers social media team, who released a retro video game-themed video to announce when the Panthers would be taking on their opponents, which include the teams with the top two picks in the draft and six playoff teams.

They’ll be opening the season at home for the second consecutive season, the first time in the Newton/Rivera Era that they’ve played two consecutive home openers – last season they opened with a 16-8 win over the Dallas Cowboys and this season they’ll take on Sean McVay and the reigning NFC champion Los Angeles Rams before a quick turnaround sends them into division play against the Tampa Bay Buccaneers in Week 2 on Thursday Night Football.

The Week 2 Thursday night game will be the Panthers’ only primetime game of the season – not particularly shocking for a team coming off a 7-9 season that allowed 52 points in their previous nationally televised appearance; the Panthers and Bucs squared off in 2013 on Thursday Night Football, with the Panthers coming away with a 31-13 win.

The Panthers and Bucs are two of eight NFL teams to only have one primetime appearance – the Buffalo Bills are the only team not to secure a slot under the lights in 2019.

They’ll then play two of their next three on the road as they travel to Arizona and Houston before welcoming the Jacksonville Jaguars to Bank of America Stadium in a stretch that sees the Panthers open their season against four teams with losing records in 2018 during their first six games.

They’ll then skip across the pond to London to take on the Buccaneers for their first experience playing outside the country before their bye in Week 7 – a nice chance to recover from both the strains of an international trip and the rigors of the season; Week 8 will see another long trip, this one to San Francisco – the last time the Panthers played in San Francisco was Week 1 of the 2016 season when they came away with a 23-3 season opening win.

After hosting the Titans, the Panthers begin their toughest stretch of opponents – those hoping for another primetime game may be in luck if the Panthers have a winning record as they’ll travel to Green Bay November 10th to face off with Aaron Rodgers and head to New Orleans two weeks later in Week 12 – two 1p games primed with flex-ibility.

Their two division games against the Falcons will sandwich a home game against the Washington Redskins, and the second matchup with the Falcons – the annual trip down I-85 – will come after 10 days of rest for Atlanta after the Falcons take on the Saints on Thanksgiving Night.

A murderer’s row of opponents will likely determine the Panthers’ playoff fate if it’s still in question as the Panthers will take on the Seahawks, Colts and Saints – all teams with winning records in 2018 and All-Pro quarterbacks – over the final three weeks of the season.

For those who wish to travel to any of the Panthers home games – including London – the Roaring Riot has Away Game Experiences for every game and every type of traveler…deposits are open now.