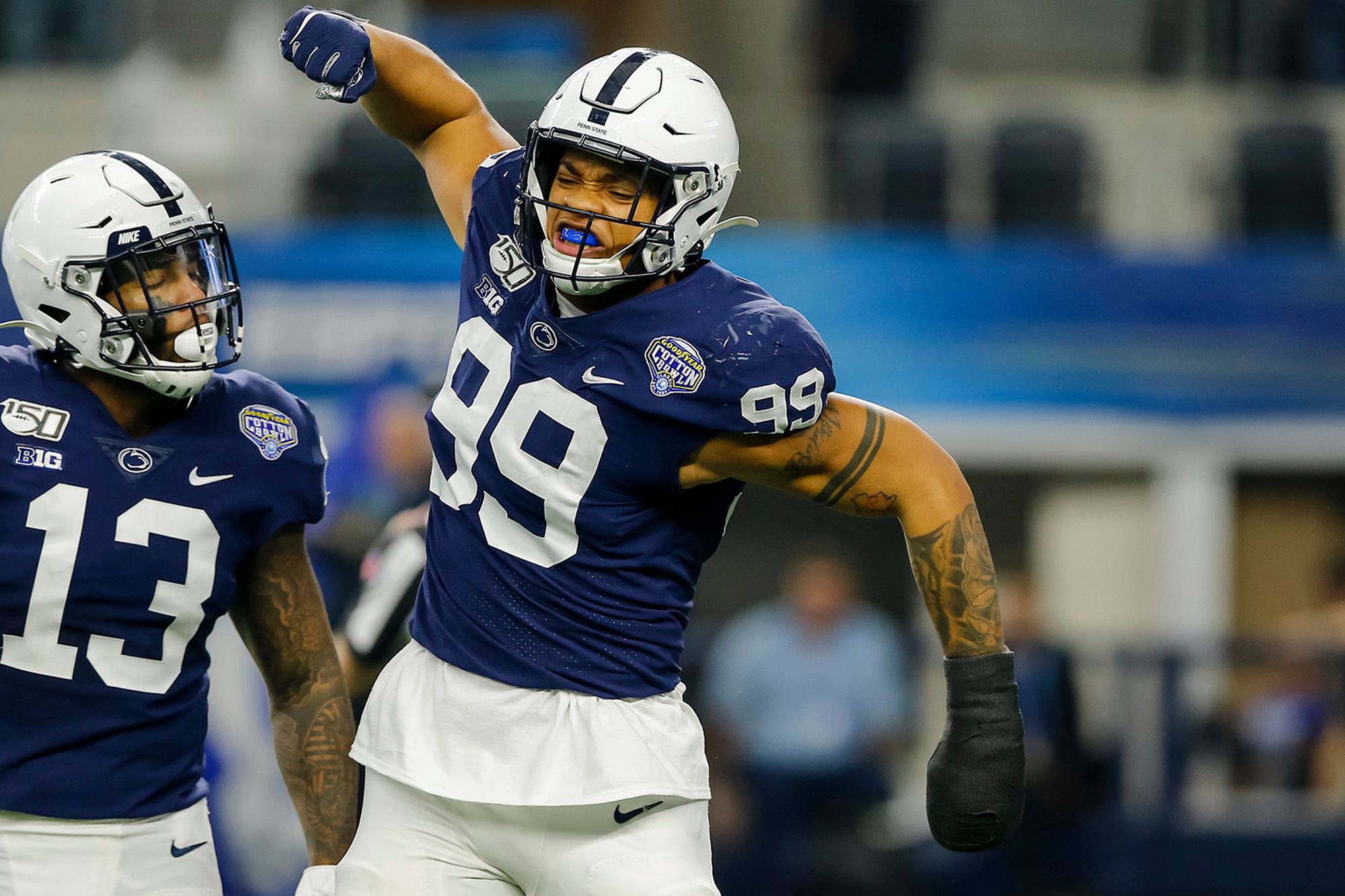 As was the case with last night’s selection of Derrick Brown, there were multiple reasons for making Penn State defensive end Yetur Gross-Matos a Carolina Panther at the beginning of the second round.

Let’s look at the on-the-field reasons first, because once you hear the tragedies that have molded Gross-Matos into the man he is today, you won’t be as interested in just how different the Panthers have made their defense in just a couple days with an injection of youth, strength and raw talent on the defensive line.

But that’s an interesting story too.

With the first pick of Matt Rhule’s first draft as Panthers head coach, the Panthers made a big move to improve their defense – a pick that stands six foot, four inches tall and weighs 326 as he occupies multiple blockers in the middle of the defensive line in Auburn’s Derrick Brown – afterwards, Marty Hurney said that he and Rhule didn’t expect Brown to still be available when they drafted in the seven slot.

And in the second round, they doubled down on that philosophy, drafting Penn State defensive end Gross-Matos with the 38th overall pick and continued to build their defensive line – a unit that allowed multiple starters to depart in free agency this offseason after having one of the worst seasons in NFL history from a defensive perspective, giving up over five yards per carry and the most rushing touchdowns on the ground in a single season since the merger. 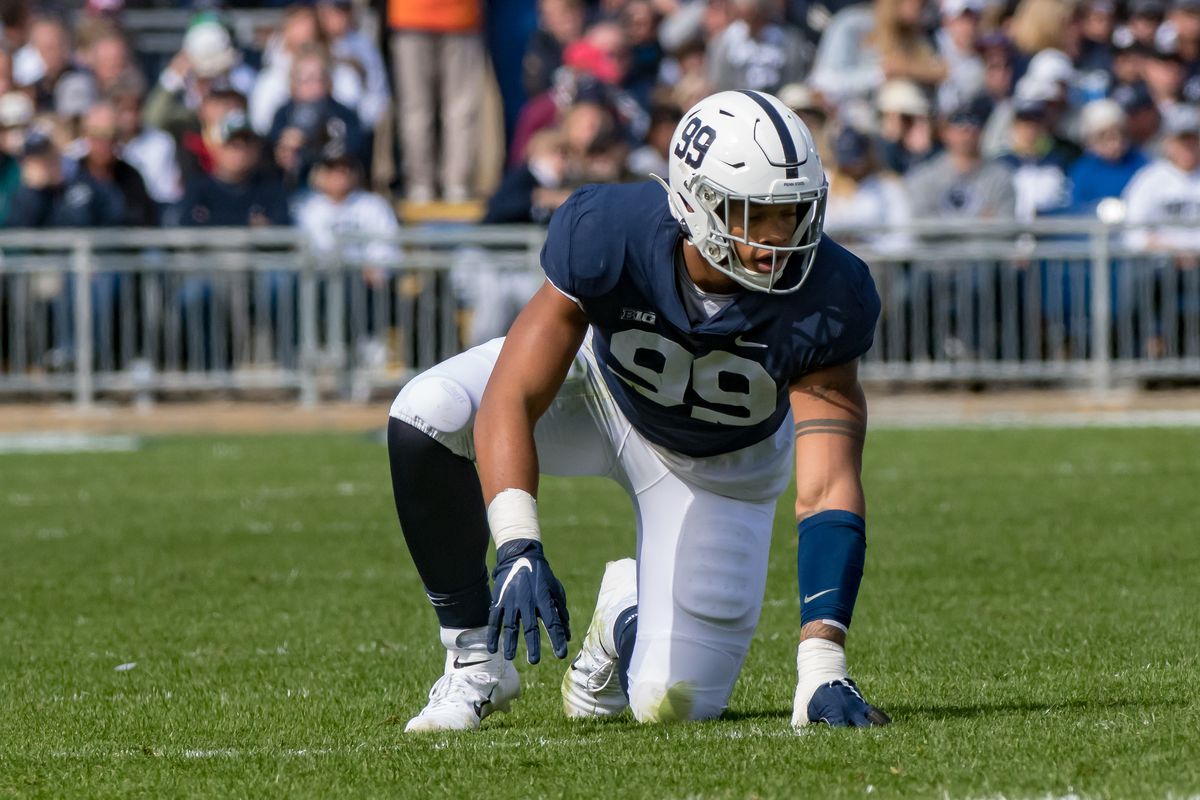 The Penn State defensive end met with the Panthers at the Combine and had FaceTime calls with Rhule, Hurney and defensive line coach Mike Phair throughout the draft process, leading him to believe that the Panthers just might be turning in a card with his name on it – it was less of a foregone conclusion for the Panthers camp, who thought that the pass rusher wouldn’t make it out of the first round.

When he did, they did what they did in the first round – they rushed to pick the highest player on their board.

Gross-Matos adds to a defensive end class that includes Brian Burns, Efe Obada, Marquis Haynes and free agent acquisition Stephen Weatherly – all of the edge rushers in Carolina have something in common: they’re all talented, but they have a rawness and the ability to get better as they grow. At 28, Obada is the oldest of the group and has gotten better every year in the league.

The newest defensive lineman for the Panthers is the same type of player as he grows into his talent.

“The thing I did the most at Penn State was learn more about football and improve technique-wise,” said Gross-Matos, who played football at Chancellor High School 50 miles south of DC where he was recruited by multiple schools, including getting an offer from Matt Rhule at Temple, before ultimately ending up in Happy Valley. “I didn’t really play a lot of football growing up and then going into high school, I played at a really small high school with not a lot of plays, so just becoming more knowledgeable [about] what I was being asked to do and the things going on around me.”

“I’m climbing this upward hill and I’m nowhere near the top still. There’s work to be done still.”

“I think the thing with Gross-Matos is that he’s somebody that had high sack production,” Matt Rhule said. “He’s a young guy, he’s only at the beginning of his physical development….I think he’s going to continue to get big and provide us with that strong side defensive end presence to go along with Weatherly and Obada, so we’re really ecstatic about him.”

The 6-5, 264 pound defensive end from Virginia earned third-team All-Big Ten honors as a sophomore and was named Penn State’s Defensive Lineman of the Year in his breakout season after leading the team with 20 tackles for loss and eight sacks among his 54 tackles – with two forced fumbles – in 13 games.

Last season he had 15 TFLs and 9.5 sacks as he would occasionally bounce inside in the Penn State 4-3 scheme, something the Panthers will almost certainly ask him to do in Phil Snow’s defense. Last night, after praising the versatility of Brown and his ability to move all over the line, they found a player who can do the same thing with their second pick.

“I’ve had plenty of experience rushing inside and outside in college,” said Gross-Matos. “I was asked to move all around the front four, so I have no problem going inside or outside.”

“Wherever they need to be, I’ll be there.”

And after drafting a player that is almost certain to occupy double teams and open up space for fellow pass rushers on their defense, they went out and immediately found someone to use that space to make big plays in Gross-Matos – not just .

Beginning to find a fix for a broken defense was clearly a key for the Panthers after focusing on offense in free agency, and their first two picks have done just that.

But it’s not just who he is on the field – off the field plays a part in who a person is, too.

Unthinkable tragedy and pain are part of his journey.

But Gross-Matos’ dad and big brother sure must be smiling now 💙pic.twitter.com/ahu289oWzb

It is clear that Matt Rhule values character above almost any other trait for players in his locker room – and Gross-Matos has been through more adversity than most as he’s made his way to the NFL.

When he was two years old, on a family outing at St. Leonard Creek in Calvert County, Maryland, the toddler fell out of the boat and into the water. In the struggle to save his son, Gross-Matos’ father Michael, drowned.

The 29-year old father had traded his life for that of his son.

Nine years later, Yetur’s older brother Chelal, at only 12 years old, was also taken – struck by lightning on a baseball field after instructing his 10-year old younger brother with whom he had shared a bunk bed with to stay with their parents.

“You’ll never get an explanation,” Yetur told Kimberly Jones earlier this year. “There are a bunch of kids, bunch of adults, and two kids playing catch and one ends up getting struck by lightning. And nobody else. One of them survived. One didn’t.”

“When I was younger, it just made me angry. But the situation is the situation, you try to make the best of it.”

Yetur – whose name means “surrounded by family” – has a tattoo on his left arm with Chelal’s name and uniform number. And he’s used what he’s been through to be incredibly close to not only his family, but those around him – his circle remains understandably important to him.

Which was why he was itching to get off of a Zoom teleconference after being selected by the Panthers, but he stood patiently, answering each question with a smile on his face, even showing off his size 17 Crocs at one point – and when the inevitable question about his past came, he handled that one, too.

The same way he’s handled everything else that life has thrown his way.

“I take those things and [use them to] put the rest of my life into perspective,” said Gross-Matos as he stood in front of balloons spelling out his name with his family just out of frame. “It’s just about taking advantage of every opportunity and every second of every day. Give your best and love the people around you. Me and my family are a very close group – that’s how it’s affected me on and off the field.”

“I’m just happy to be in this moment with these people and I can’t wait to celebrate.”

He doesn’t have to wait anymore.