Panthers “Building From The Front” With Derrick Brown 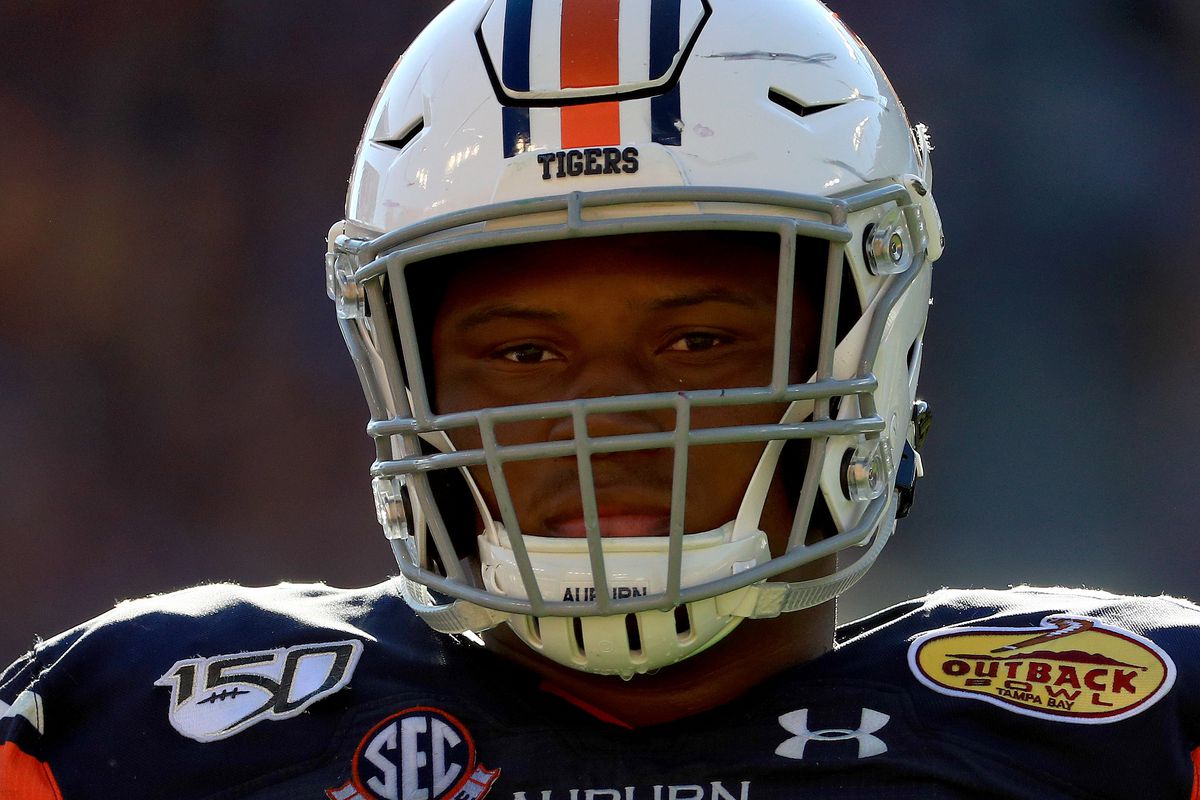 At the end of the day, the Panthers got their man.

Even after the first six picks went according to plan for most pundits around the NFL, with three quarterbacks all being selected ahead of the Panthers and three of the top four tackles still available, seeming to set up the perfect trade down scenario, the Panthers never wavered in their decision to make Auburn defensive tackle Derrick Brown the first pick of the Matt Rhule Era in Carolina.

Because Brown had made their choice easy for them – they had been building towards a singular verdict between Hurney and Rhule for weeks as the two decision makers spoke more than 20 times per day in the weeks leading up to the draft.

Ultimately, even with a mountain of evidence in front of him, it was a single meaningless game that tipped the scales for Rhule – but we’ll come back to that.

The process began in earnest at the Senior Bowl – both Rhule and Hurney met with the 6-5, 326-pound defensive lineman his teammates call “Baby Barack” because of his love of debate and politics, in Mobile and were taken aback with his poise and demeanor, but ultimately doubtful that he would be available when the seventh pick rolled around.

Rhule: “When I left that meeting with him, I’m not going to say I was emotional, but I was like, touched by who he was – his spirit comes through.”

Hurney: “It was just the feeling that you got when he stood up and left, it was like, wow, this is a really good kid.”

It gained steam when Rhule pinged new offensive coordinator Joe Brady, who said that in LSU’s matchup with Auburn last season, Brown was the one player he knew he had to gameplan for – it didn’t work as Brown had seven tackles, two for loss and a sack on Joe Burrow in a narrow LSU win.

The 23 points scored against Auburn was LSU’s lowest total of the season. 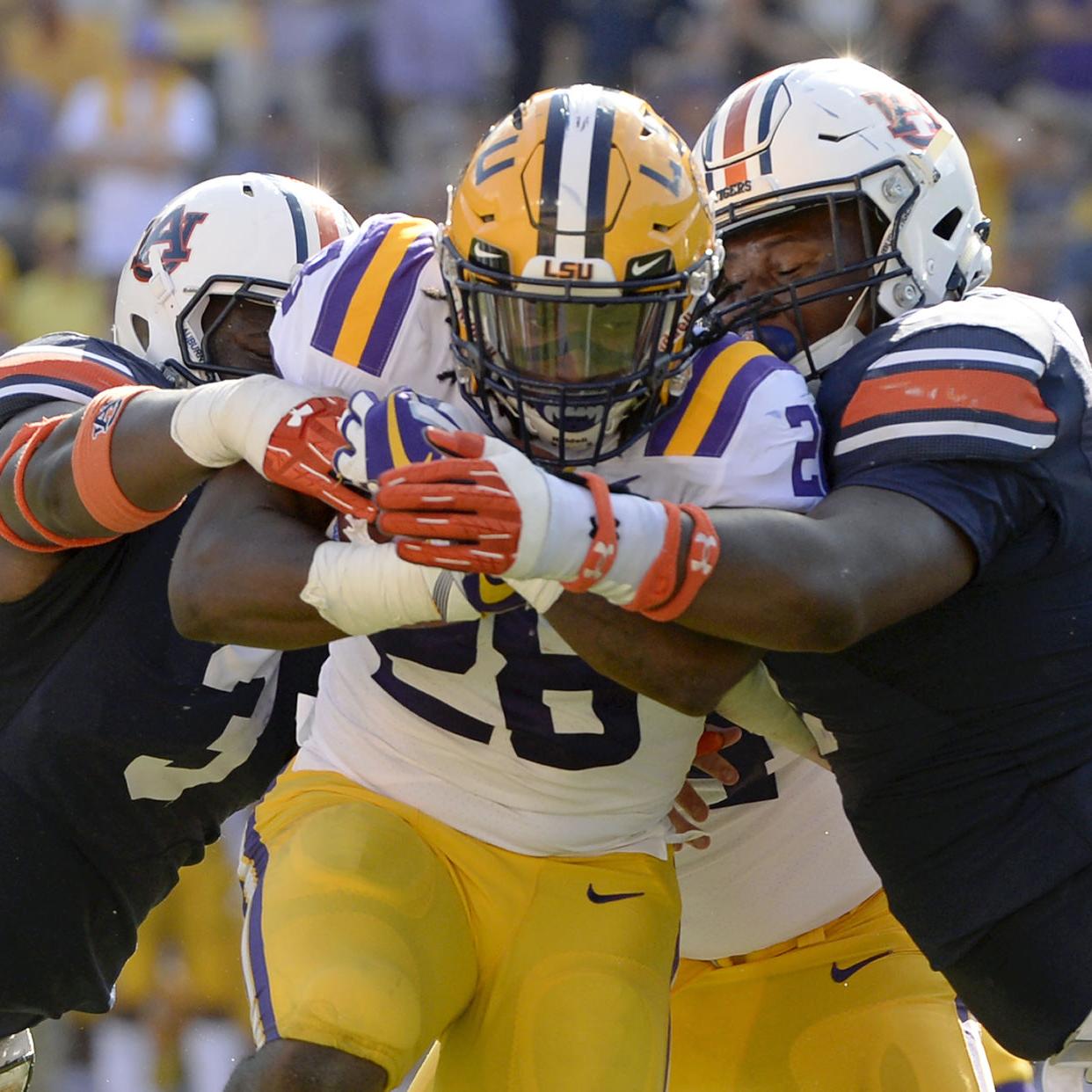 Talking to Auburn coaches and staff members didn’t change their opinion as coaches raved about how he was “one of the great practices players they’d ever seen” and they “can’t say enough about him and who he is.”

Speaking to him at the Combine or attending his Pro Day at Auburn did nothing to change their opinions – Brown’s coaches raved about him when Hurney went down to Auburn.

“Every time you met with him, you just got a stronger and stronger feeling,” said Hurney.

But it wasn’t until the morning of the draft, while Rhule was watching tape of Brown’s final college performance – a meaningless Outback Bowl matchup against Minnesota, that he was moved to send Hurney an early morning text message.

Despite entertaining some earlier discussion that they might trade down, a decision had been made – if Brown was available, they wanted him. 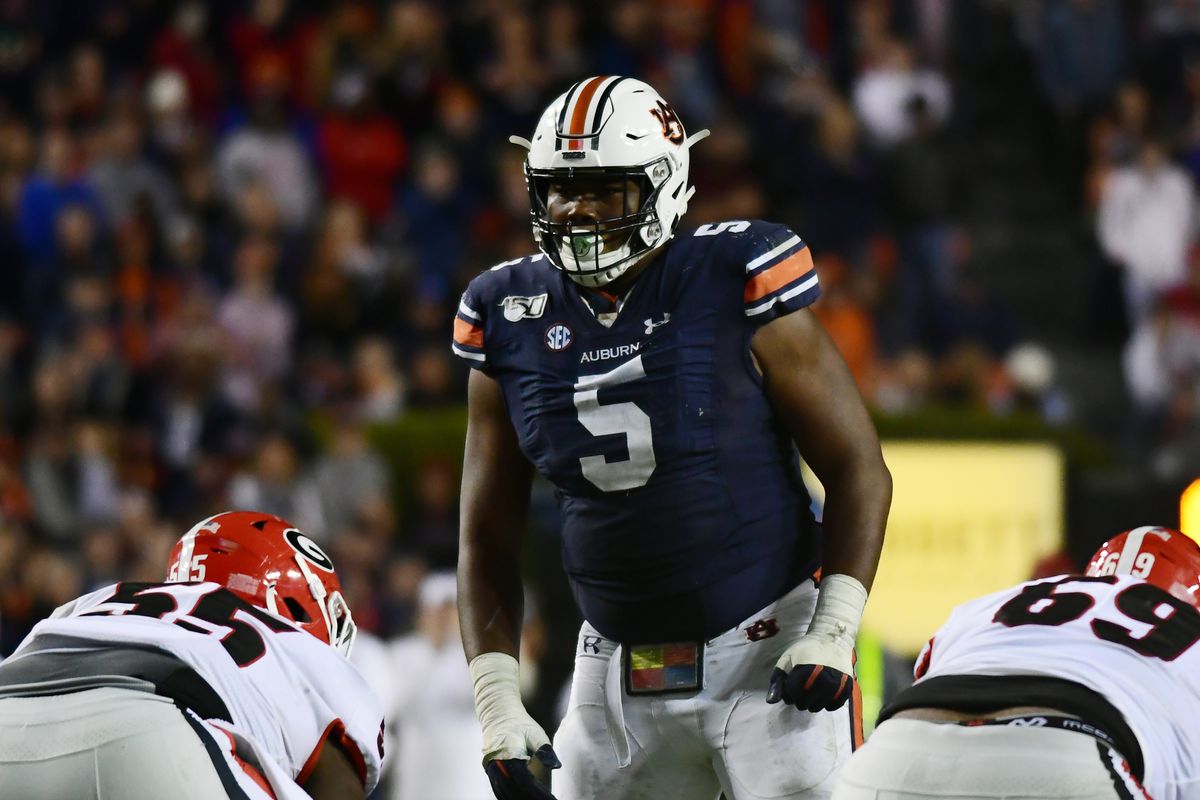 While some fans will bemoan the Panthers for not taking multi-positional player Isaiah Simmons from Clemson, who went a pick later to the Arizona Cardinals, Rhule says the versatility that Brown showed as he was named a unanimous consensus All-America defensive tackle last season with 55 total tackles and 12.5 tackles for loss was one of the reasons the Panthers valued him so highly.

“Big men that can move like him are versatile.”

Ultimately, they felt like pairing Brown with Kawann Short in the middle of a 4-3 set – which Rhule confirmed the team would be lining up in while continuing to stay multiple – would help to open up the defense. Players like Brown that consistently demand a double team tend to help other players, like Shaq Thompson, Brian Burns, Stephen Weatherly and Marquis Haynes – all of whom Rhule name-checked when talking about the 2020 defense – play at a high level.

“Everybody wants to say I’m a run-stuffer,” said Brown from his family home in Atlanta after being selected, addressing what many consider to be his greatest weakness. “But I do it all.”

All these on-the-field reasons – the big first step, the ability to stop the run and get push up the middle with his long arms – ultimately led to him being a finalist for the Outland, Nagurski and Bednarik awards – and then led to him being the obvious choice in Carolina.

“We had players that were close together,” said Hurney. “But he really was the guy that fit us the best and was the best player for us as far as starting to put the pieces together on defense.”

“When Derrick was there, I think Matt and I felt very strongly about taking him.”

But it wasn’t just on the field that mattered – not in this instance.

“You Start Building From The Front” 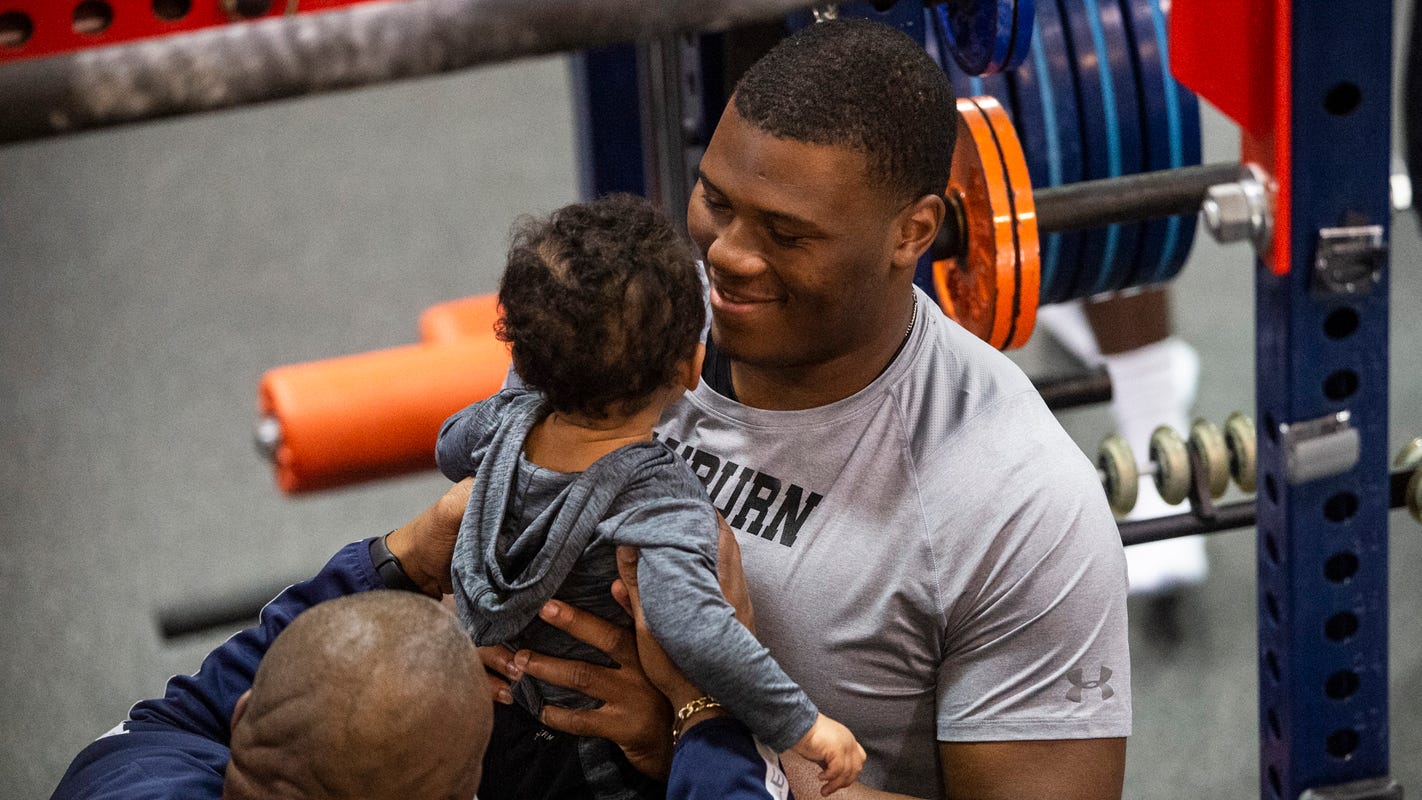 “You start building from the front.”

Those were the words that Hurney said when talking about why the Panthers made Derrick Brown their first-round pick and at first glance, it might appear that he was talking about how much a stout defensive tackle, easily the best run defender in the 2020 draft class, would immediately provide help to a defense that was among the worst in the NFL last season and had already lost multiple starters through the first few months of free agency.

But in reality, it means more – obviously, a 326-pound defensive lineman will help bottle up run games, but it’s not just occupying double teams and clearing run gaps for clean rushes where Brown will make an impact. With a new coach and a locker room starved for leaders after the retirement of Luke Keuchly, the trade of Trai Turner and the release of Greg Olsen and Cam Newton, it’s about being the right kind of player that brings the right mindset to not only a rookie year that will have a limited offseason but to a team that is looking to remake exactly what it is on the fly.

They needed the kind of man who would take his offseason work so seriously that he would go to Home Depot, buy buckets and fill them with sand to get a proper workout at home during the self-quarantine imposed by the COVID-19 pandemic, as Brown has done. The kind of man that was the vice president of his school’s Student-Athlete Advisory Council and served as the team’s representative on the SEC’s Football Leadership Council. The kind of man who teammates said could be governor someday.

It’s no surprise that it was character off the field that raised his value for Rhule and Hurney as they build their team – nowhere closer to the front than the first pick of a new coaching regime.

If you’d like to doubt the veracity of taking a defensive tackle in a division made up of the best passing attacks in the league or point to his poor performance at the Combine, that’s fine – no matter how much the Panthers continue to say they’re all about analytics, their decision-making doesn’t seem follow that tract, not exactly. This pick had a lot to do with what Brown does on the field, but off-the-field reasons clearly had a very large part in the decision. 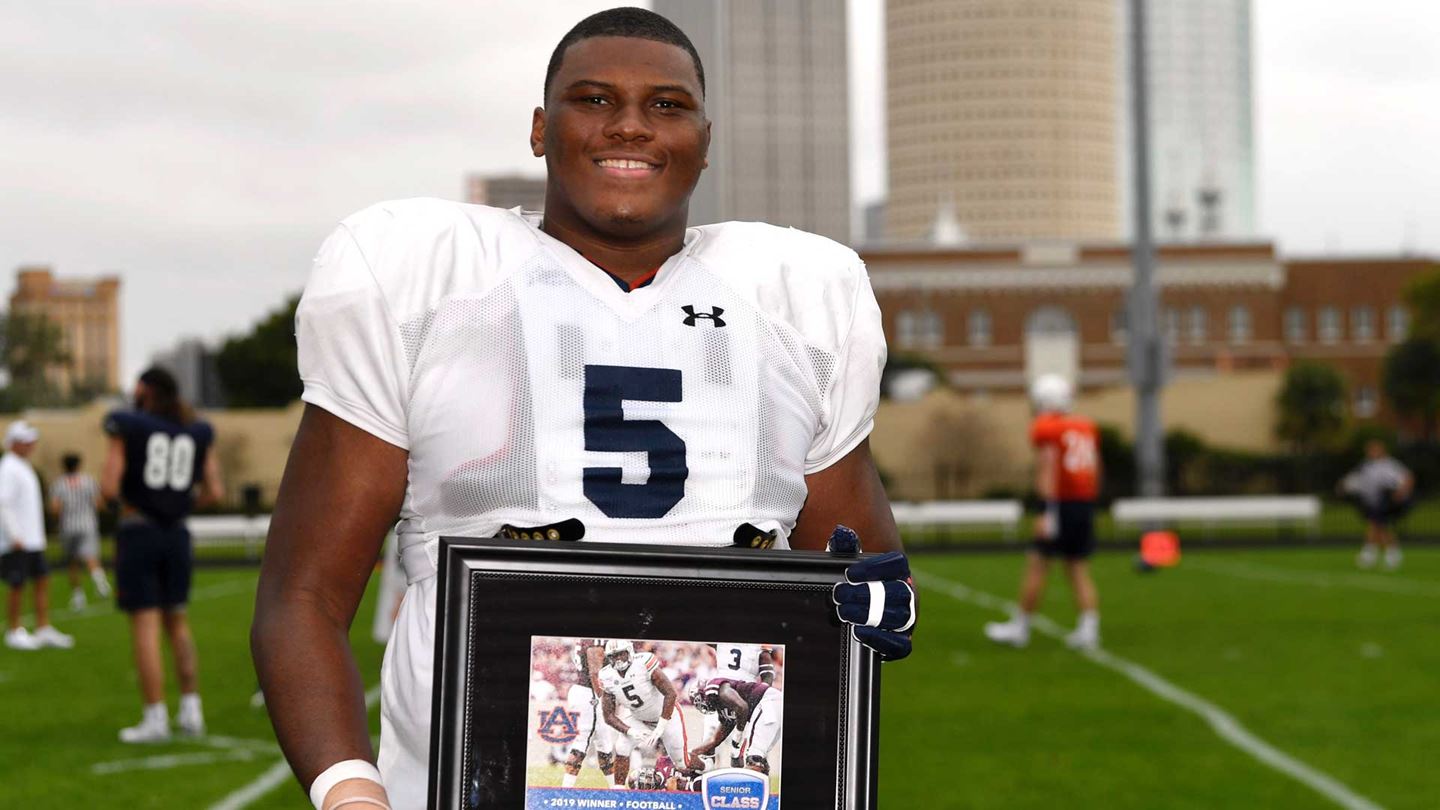 Derrick Brown was awarded the CLASS award for the most outstanding senior student-athlete in Division I football. Photo Credit: Todd Van Emst/AU Athletics

Perhaps nothing epitomized the kind of person Brown is more than the decision to return for his senior season – despite being second-team All-SEC, a finalist for the Jason Witten Collegiate Man of the Year and a ‘consensus top ten pick’ in 2019, Brown went back to Auburn to finish his degree.

“When I made that decision, I never looked back on it,” said Brown. “I never worried about getting hurt, I just pushed through and I just kept going and going and going – trying to step up and be that leader that I always knew I could be.”

“It was the best decision of my life – I got my degree in my hand and I was a top ten pick. You can’t ask for much more in this life.”

Perhaps it was thinking about that decision to come back and lead his teammates, even when he didn’t have to, that drove Rhule, on the morning of the draft, to watch tape of a meaningless Outback Bowl game that Brown could have easily skipped – most highly touted prospects tend to do just that, but to Brown, that wasn’t an option. So instead of trying to preserve his health and at the risk of perhaps suffering an injury that could affect his draft stock, Brown was out there playing almost every snap.

“There is a goal line stand where he is just playing as hard as he can,” Rhule said. “To me, that’s what we need right now in this time. We need guys that are dedicated to getting it done.”

Brown never had a doubt.

“It was never a question,” said Brown. “My teammates elected me captain in the summertime and I was going to finish my season. They put me in a position to lead them and I [wasn’t] going to cut that job short.”

After Brown announced his intent to play, all 25 seniors on the Auburn team made the same decision.