Panthers Double Down On Edge Rusher In Fourth Round 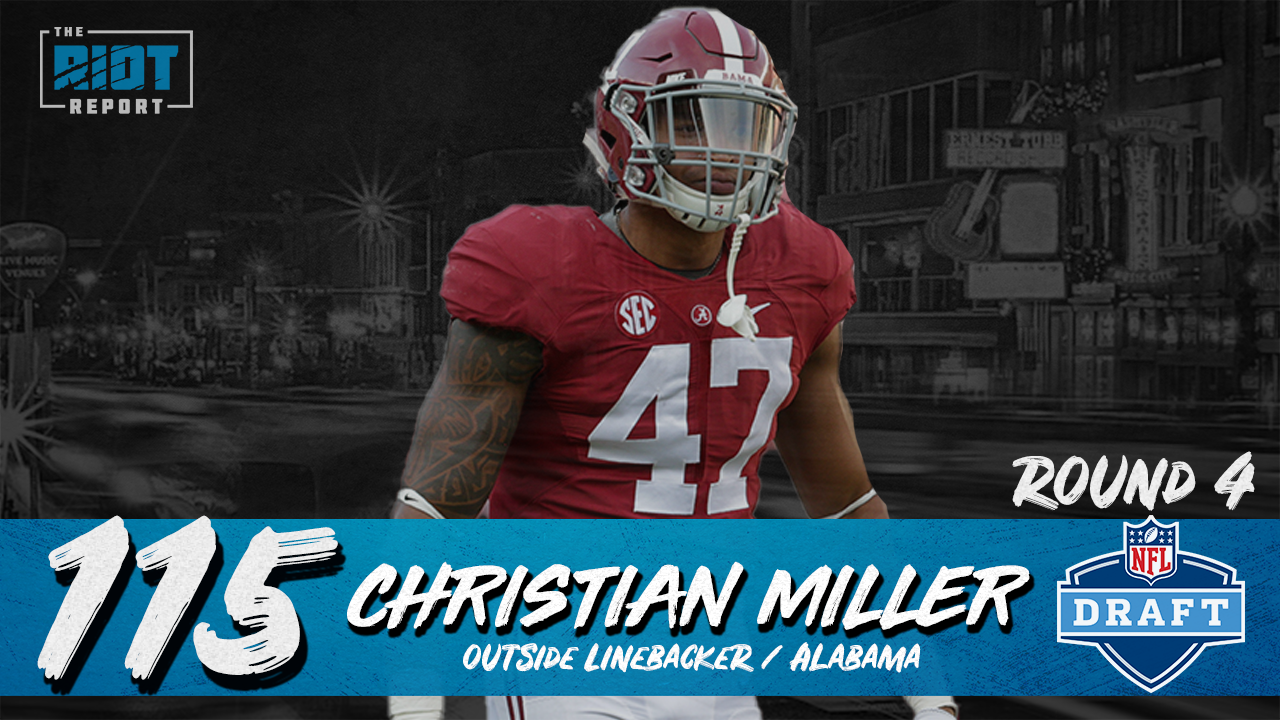 The Panthers used the 16th pick in the 2019 NFL Draft on a quick, rangy pass rusher who plays on the edge with extreme athletic ability in Florida State edge rusher Brian Burns.

Almost 100 picks later, they used their first pick on Day 3 for a similar – but different – player in Alabama’s Christian Miller.

Miller, who was a powerful, explosive linebacker, showed a penchant for getting to the quarterback even in a limited role – Miller only started four of the Crimson Tide’s 14 games but was a presence in every game of the 2018 season as he rolled up 36 tackles, 11.5 for loss, and 8.5 sacks over the course of the year.

Miller dealt with injuries throughout his time at Alabama as a biceps injury kept him off the field for 10 games his junior season and he missed the National Championship game with a tweaked hamstring in 2018 – that’s likely one of the reasons the Panthers were able to find him on Day 3 of the draft instead of being among the first names talked about. That’s not something he’s used to after being a top-five linebacker recruit and five-star prospect coming out of Columbia, S.C. on his way to Alabama.

“I personally feel like [the injuries] did have a decent effect on my draft stock,” said Miller shortly after being selected by the Panthers. “I feel like if you take this last season, you pretty much duplicate it with that 2017 season if I didn’t get hurt. I truly believe I have first round ability, between my measurables, my athleticism [and] off the field being a team leader – I truly do believe that.”

“It’s not where you get picked, it’s what you do when you get there….I’m just thankful I went to the right place.”

The Alabama edge rusher fits in with the theme of the Panthers having their eye on specific prospects and pouncing when they became available – Miller said the Panthers coaching staff, specifically linebackers coach Steve Russ, had kept in touch as the draft approached. As Miller watched the draft unfold with his family in Tuscaloosa, he had an inkling the phone might be ringing when Carolina’s pick came up.

“If they didn’t pick [an edge rusher] in the first round, I definitely would have anticipated getting a call,” said Miller.

Miller likely fits in with the Panthers plan to move towards a 3-4 defense in 2019 as he has the ability to both rush the passer and drop into coverage from the outside linebacker spot – he and first round selection Brian Burns have corresponding skillsets, one of the reasons why the Panthers doubled down on similar positions.

“I really feel like we can be a great tandem.”