Panthers Failure To Stop The Run Has Sunk Their Season 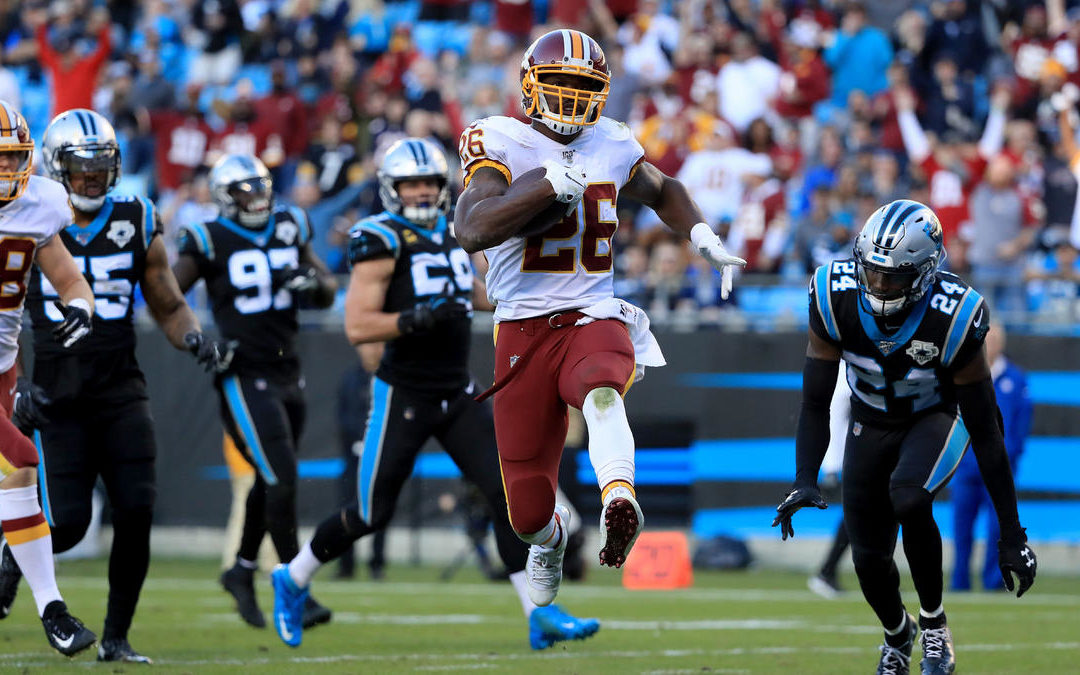 Throughout the first 12 weeks of the season, the Panthers rushing defense has been criticized for their allowing big plays on the ground – they’d allowed 10 rushes of 25+ yards through 11 games and their opponent’s have averaged over five yards per carry in seven of those contests. In Sunday’s shocking loss to the 2-9 Redskins, the Panthers defense had its worst game of the season trying to contain the run – and it all began with another chunk play as Derrius Guice initiated the scoring for Washington when they could do nothing else as his 60-yard first quarter rush straight up the middle allowed them to stay in the game after the Panthers went up 14 points.

Those 60 yards would account for less than a quarter of the Redskins rush offense as the 248 yards on the ground were their highest total since 2012.

Guice led the way with 129 and two touchdowns on 10 carries, while veteran Adrian Peterson finished with 99 yards and a touchdown on 13 carries. Sunday marked the tenth time in the last decade the Redskins rushed for three or more scores. The Redskins averaged eight point three yards per carry.

“They finally got to see the two-headed monster,” said Guice. “These are the days I have been waiting on since they called him when I tore my ACL.”

“The offense really stepped it up and did great because when Bill became head coach, he wanted to run the ball and I feel like today we really did that on a whole different level.’

Although the Panthers’ defense will take a lot of the blame for their inability to stop the Redskins rushing attack, some of the blame should also fall on the offense. After the Panthers jumped out to a 14-0 lead, their offense failed to have more than seven plays on any drive until the fourth quarter when the Redskins had scored 29 unanswered points. During that same span, the Panthers had four three and outs and an interception deep in their own territory that led to a Redskins one-yard touchdown run by Guice.

The Panthers longest drive of the game took up just 4:21 of game time. 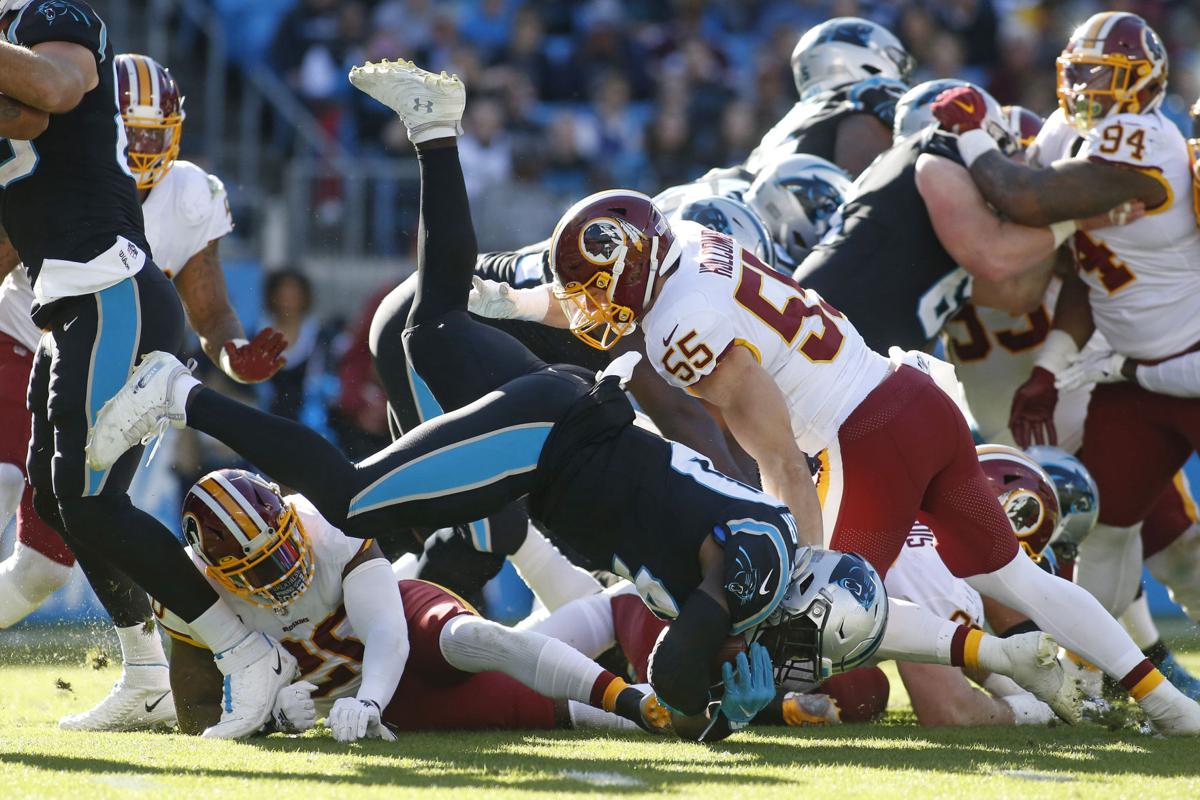 Although the defense was on the field for more than half of the game, Mario Addison – who had 1.5 sacks and seven tackles – wouldn’t blame the Panthers offense.

“Defense, we’ve got to be consistent with stopping the run,” Addison said. “We’ve got the team, we’ve got a lot of good players. We can be a great team, but we’ll never be a great team if we don’t play together like we know we can.”

Entering Sunday’s game, the Panthers defense was ranked 27th in the league in rushing defense, allowing an average of 127.5 yards on the ground. During their four-game losing streak, the Panthers defense has allowed 151.5 rushing yards per game. Panthers players all season have spoken about gap integrity and doing their job – but it’s not happening on the field; the Redskins came in averaging less than 90 yards on the ground and eclipsed that number by more than 150 yards, their total was more than 100 yards higher than their previous best on the season in a single game.

“They just had a dominant day up front,” said Donte Jackson. “They were getting the point of attack moved early, the offensive line was getting downhill and creating lanes – we just have to execute and make tackles. I missed some tackles out there and I know a lot of guys could say the same. We’ve just got to keep fighting and just know that we’re all professionals and there are going to be games like this.”

The Panthers switched to more of a 3-4 look with multiple fronts this season – a change from the 4-3 set that they’ve run in the past. The results this season have actually sent the run defense spiraling. Entering the season, the Panthers had allowed just 98.5 rushing yards per game in the past seven seasons, second best in the NFL – this year, they’ve allowed 137.5 yards per game.

That’s the highest total in the Ron Rivera era.

“I have to take a look at the tape,” Rivera said. “This was different. This week was completely different because of the players we had out there. We didn’t have [Dontari Poe] on the football field. We added [Stacy] McGee and played a new a guy. Gerald [McCoy] wasn’t 100%  and that’s tough; we have guys, I think, who are capable of doing some good things. We, as coaches, have to make sure we are giving them every opportunity with the calls we make.”

The Panthers have battled injuries up front with both Poe and Kawann Short on injured reserve. 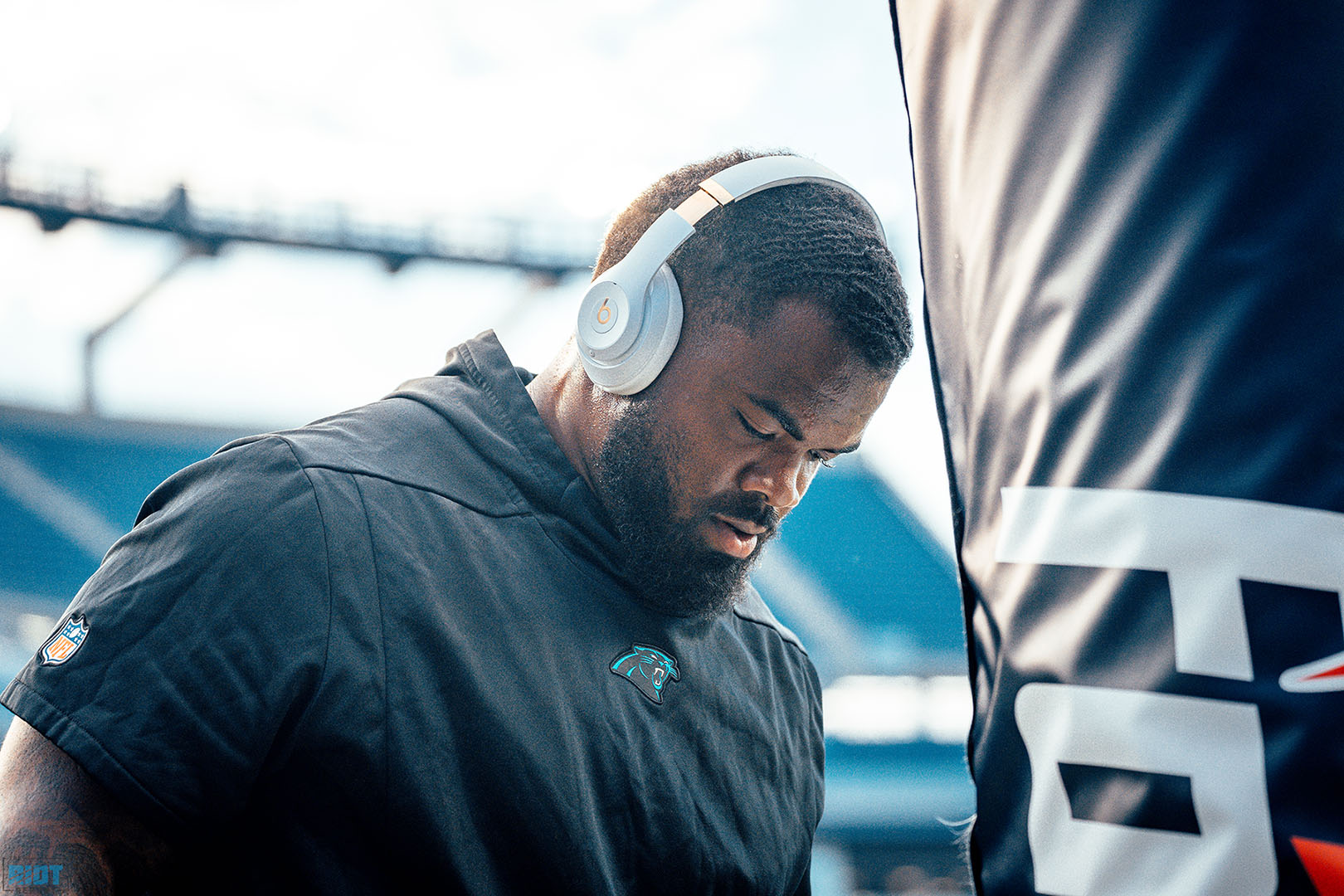 More than anything, the Panthers are just searching for a win – any kind of win at this point. Carolina hasn’t won a game since their November 3rd game against the Titans and are currently in a bit of a freefall. Since their last victory, the Panthers have lost to the Packers, Falcons, Saints and now the Redskins, who only had two wins on the season before Sunday and while questions will swirl about Rivera’s job security, the players appear to have his back – at least outwardly.

“We took another on the chin that hurt today,” Luke Kuechly, who Sunday became the fifth NFL player since individual tackles were recorded with eight straight 100-tackle seasons, said. “We’ve got a lot of good guys in this locker room, coach Rivera does such a great job of keeping us levelheaded. He’s done a great job with it since he’s gotten here and we are going do the same thing moving forward. Nobody is going to get mad at anyone, nobody is going to get frustrated, everyone is just going to lock in and do their job and that’s what we have to worry about. Moving forward, we are going to watch the tape tomorrow and see where we can improve on. There will be some opportunities to improve on obviously, but we had some guys that played well today. But it is one of those things that consistency wins football games.”

“Coaches did a great job this week of putting us in position. Us players just have to do a better job of making the plays.”