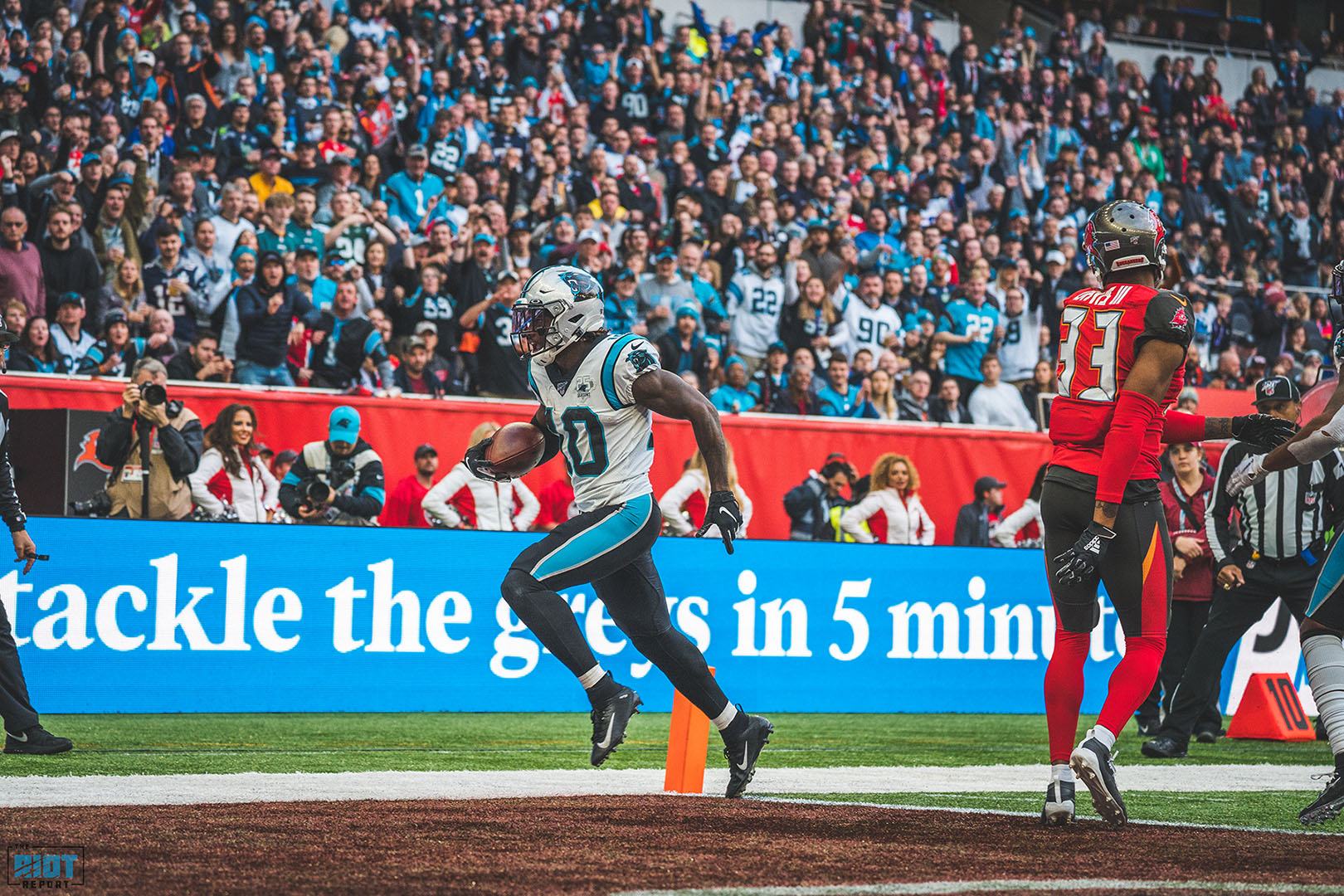 It started early – even earlier than the 9:30a EST kickoff.

As the first jerseys began to trickle into Tottenham Hotspur Stadium for only the second NFL game to be held at the newly minted edifice that looked as if it was worth every bit of the $1 billion pounds – you don’t want to think about the conversion rate to dollars – it cost to build it, there were some odd ones.

While there had been warnings that NFL fans in London weren’t necessarily fans of a specific team and were more than happy to come and watch the game even if their favorite team wasn’t across the pond, it was apparent immediately – there were custom Redskins jerseys, throwback Dan Marinos and Russell Wilsons in the stands; Browns, Raiders and every team in the NFL was represented. A couple wearing two different iterations of a Larry Fitzgerald jersey, one home, one away, were spotted in 50-yard line seats a few rows up from the sidelines trying desperately to get the attention of Christian McCaffrey on the sidelines.

But overwhelmingly, it appeared that the jersey of choice for Sunday’s match in London was either black. Or blue. Or white. And it was certainly emblazoned with familiar names to those back in Carolina – McCaffrey. Samuel. Newton. Delhomme. Mills. Smith. Kuechly. There was even a Chris Weinke walking the concourse.

While it was technically a home game for Tampa Bay – and there were certainly fans of the Bucs in the crowd, as evidenced by the loud ‘Bay’ for every ‘Tampa’ announced over the speakers – and the sidelines were outfitted in red, at times it felt like the Panthers had gained an extra home game across the pond.

And the players noticed.

“I was a little surprised – they said it was supposed to be a Bucs home game,” said Tre Boston, who fired up the crowd enthusiastically each time the Panthers forced one of their seven turnovers. “When I first came out, I saw a lot of Bucs’ fans but as the game was going, I’m looking up, I’m hearing the chants, we’re on defense I’m hearing them and I’m like, ‘Dang, we’ve got a lot of Panthers Nation out here.’”

Gerald McCoy was surprised – he’d come over with Tampa Bay in 2011 and assumed that the large contingent he’d seen then would still be represented at Tottenham. But the roars when the Panthers ran out of the tunnel compared to the boos as the Bucs exited the field or the Luuuuuke chants every time the Panthers’ captain on defense made a tackle or the reactions to every one of the Panthers’ seven sacks made it seem as if the crowd was certainly tilted in Carolina’s favor.

“Panthers nation is everywhere and we love it,” grinned McCoy, who had 2.5 sacks against his former team.

Ayyy Huge S/o to @roaringriot and all #PantherNation at one point it felt like we were at home in the Bank!! Might as well been the “London Panthers” the way y’all showed up and showed out! Love the Support!! Keep that same Energy! 🇬🇧✈️#KeepPounding #ThieveryTravels #GreatWin

And while the rumors of the British crowd cheering for big plays on both sides was certainly true and the energy in the stadium was buzzing from the moment the players began warming up on the field, as the Panthers lead started to grow, the Keep Pounding chants were audible in the stadium and those that held no allegiance to either team perhaps lended their voices to the winning cheers.

A rising tide lifts all boats and a winning team collects all stragglers.

“Our fans did a great job,” said Greg Olsen. “Our fans traveled. We could see it on social media and I knew a lot of people back home made the trip, which was cool to see. To now have a win, it makes that long flight better for everybody.”

The Panthers fans were strewn throughout the city, consistently filling the Barrow Boy & Banker, named the official Panthers pub of the week, with black and blue.

Thank U @roaringriot for bringing out the support and love from r fans thru out the fandom. I met folks from Germany, Ireland, France, Sweden and so many other countries. It truly felt like a home game! Thanks for the support & #KeepPounding! Coach R aka @RiverboatRonHC

Many came across with the Roaring Riot, who made their presence known in London throughout the weekend with a Pep Rally attended by David Tepper on Friday night, a bar crawl that numbered in the hundreds on Saturday and two tailgates, one hosted by the local Royal Riot chapter in London, that packed multiple venues within walking distance of the game on Sunday morning with over 1,000 Panthers fans.

“What the Roaring Riot has done is unbelievable,” said Ron Rivera after the game. “They’ve got chapters all over – we found out very quickly they’ve got a chapter here and a chapter in Germany – it’s cool to be able to have that kind of support and have that type of fanbase come out and cheer for us. It was really something.”

The Roaring Riot has over 40 chapters in the United States and chapters all across the world, including Moscow, Germany, Mexico and Europe – at least ten different countries were represented in the group of over 1,000 that attended the events throughout the weekend.

And as the Tampa Bay fans grew quieter, the Roaring Riot grew louder by the touchdown at Tottenham Hotspur Stadium – the stadium DJ even helped out by playing Shaboozey and DUCKWRTH’s “Start a Riot” – the same song played at Bank of America Stadium as the Panthers kick off.

“I almost thought we were the London Panthers for a second,” said Boston. “[with] the way they were giving us a home-field advantage.”