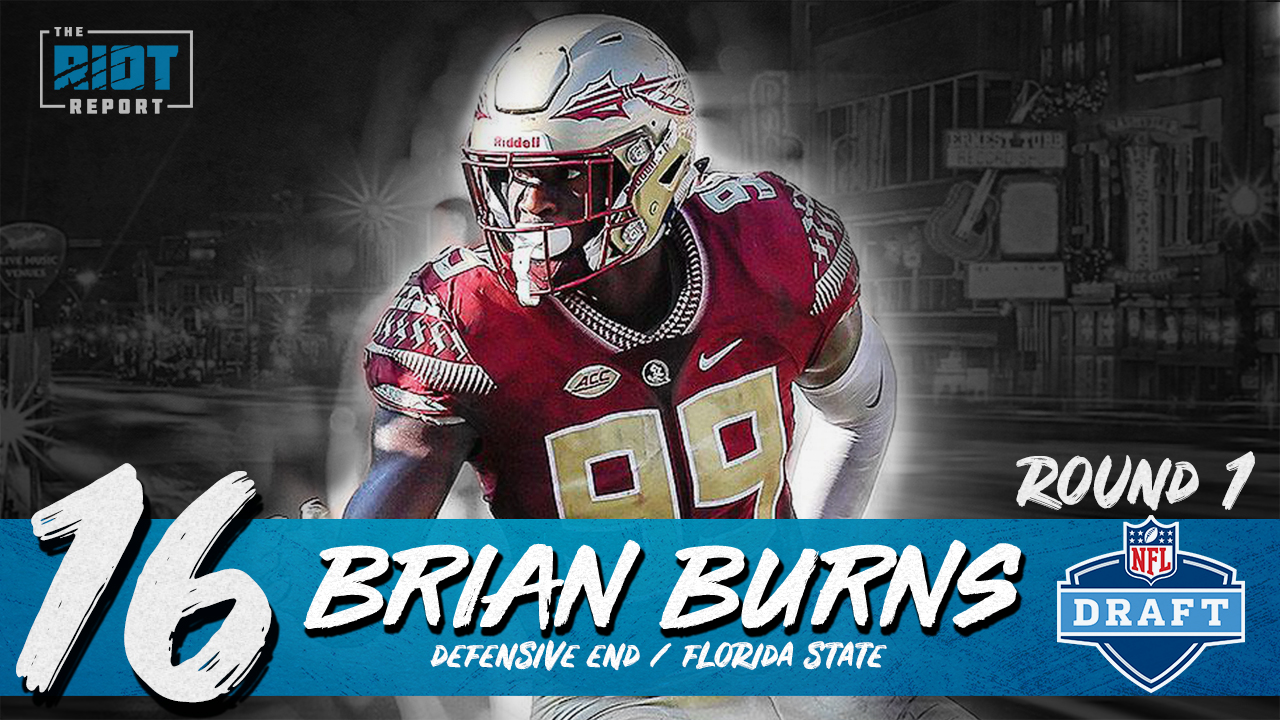 He reads the mock drafts, he sees the big boards – Hurney was well aware that the Panthers had been connected to a specific player since very early in the draft process. And as the draft got closer and closer, it appeared that the 6-5 Florida State edge rusher from Fort Lauderdale who had 124 tackles, 24 sacks, seven forced fumbles, seven pass breakups and three blocked kicks wasn’t going to be available at the 16th pick as his stock rose throughout the scouting process.

But as the draft wore on, it appeared – especially once two linebackers and two quarterbacks went in the top ten – that Brian Burns, who had been linked to the Panthers in mock drafts since January, was going to be available.

“You don’t know what’s going to happen,” said Hurney. “Honestly, if you would have asked me three or four days ago; I know I kept seeing his name next to us in mock drafts all over the place, but I really wondered whether he would get to us.”

“The way it went, we felt good that the guys we had lined up, [that] we were going to be able to get a good football player – [but] we get a guy who we think has elite athletic ability; he’s got length, he’s got speed, he’s got elite change of direction, he makes plays rushing the passer and that was one of the needs we wanted to address.”

“There were times coming into this process, I didn’t think he’d be there, but he was and we’re thrilled to have him.”

Burns saw it too.

“I’ve seen a lot of my name connected to the Panthers,” said Burns after being drafted. “That means a lot – it’s already written. Going into this process, I already knew that I can’t control nothing else, so I’m just going to sit back and see what happens and this was already written and I’m glad it was written this way.”

With Julius Peppers retiring and the Panthers moving to more of a 3-4 defense, which Burns’ varied skillset lends itself to naturally, the fit in Carolina seems perfect – so much so that it’s been on Burns’ mind for a while.

“[Think] that this could definitely happen? Yes, I did,” laughed a giddy Burns. “As soon as [Peppers] retired, because I follow him on Instagram, as soon as he retired I already kind of put it together like ‘Yeah, this is going to be crazy if they pick me.'”

While Hurney and Rivera are ecstatic with the raw ability that Burns exuded during his time in Tallahassee, he’s still got some work to do to succeed at the NFL level – Rivera mentioned deficiencies in his game to work on – he sometimes looks to the ball while still engaged with the blocker and he still needs to broaden his pass-rushing arsenal, even though he’s got moves already. But one thing that will absolutely have to happen is he’ll have to put on some weight, as Burns, who just turned 21 on Tuesday, was listed at 235 pounds in 2018, weighed 249 at the scouting combine and 242 at his Pro Day.

“The combination of his speed, his change of direction [and] his ability to stop on a dime and redirect – he uses his length to set the edge on the run. His arms are so long, he creates space between him and the blockers – he’s just got so many tools to work with and he seems to have that desire to reach his ceiling.”

So what’s next for a newly-minted 21-year old who was just selected in the first round of the NFL Draft? Out on the town in Nashville? Celebrate with his brother, former Panther Stanley McClover, who Burns said was more excited than he was in the green room?

“The main way I really want to celebrate and bring this moment is going to watch Avengers: Endgame,” said Burns. “I can’t wait to see that movie – that’s how I plan on celebrating. It’s like three hours and two minutes and I’m going to be awake and tuned in the entire time.”

Burns said that his connection to the Panthers felt like it had been destined for a while – “it’s really mind-blowing that I’m going to the Carolina Panthers and my brother played for them I don’t know how long ago, but it’s blowing my mind” – but it was a moment near the end of his introductory conference call with the Charlotte media that certainly made it appear, whether it was purposeful or unintentional, that Burns was preordained to be coming to Carolina the whole time.

“I played basically every snap and I didn’t want to let my teammates down so I just kept pushing,” said Burns.