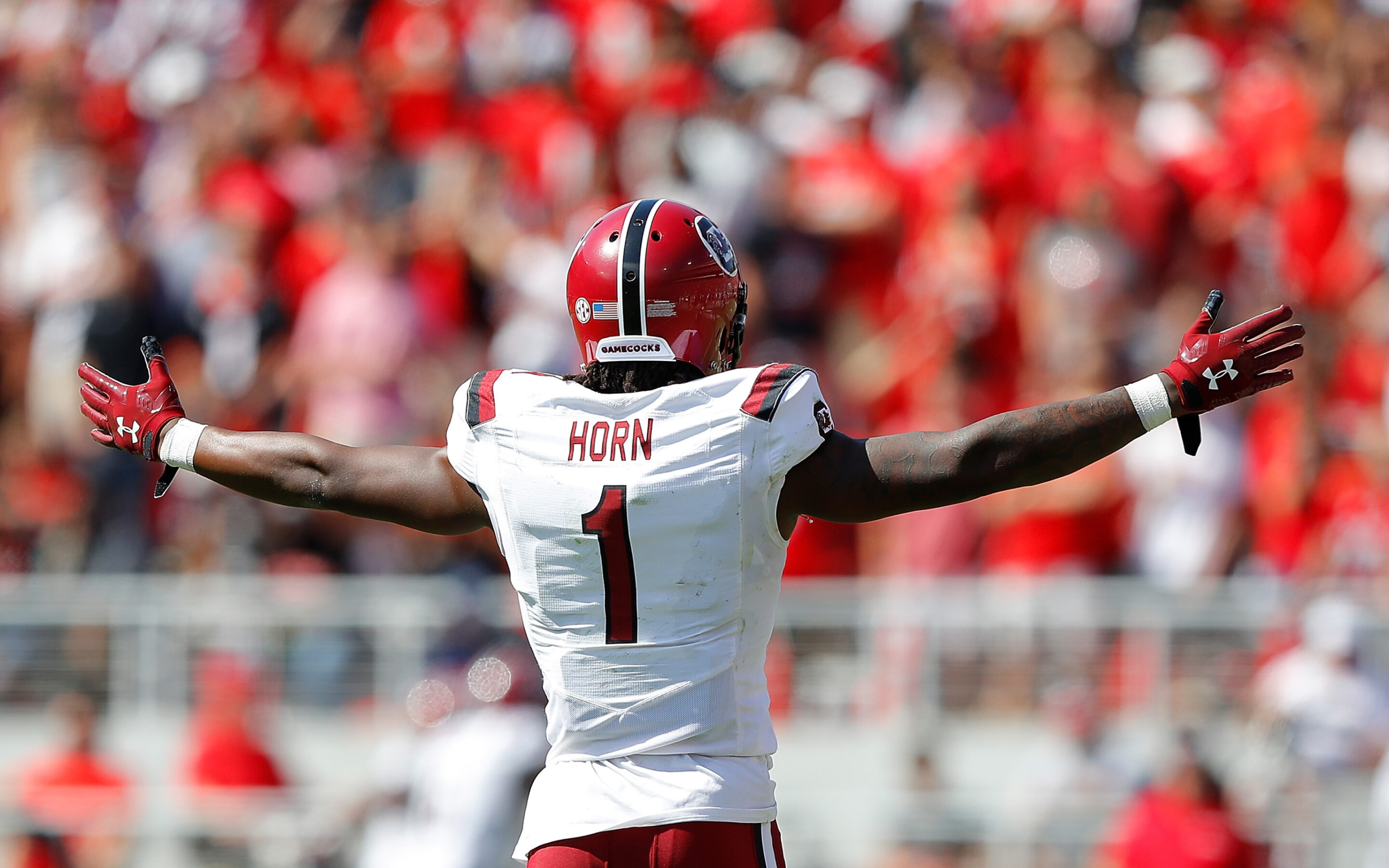 With the 8th overall pick in the 2021 NFL Draft, the Carolina Panthers selected South Carolina cornerback Jaycee Horn – and while a major part of the narrative surrounding this decision will revolve around the fact that he isn’t Justin Fields, the major focus should be the fact that the Panthers have made yet another major move to help improve their defense, a young unit which played well in 2020 despite some talent limitations.

Horn has been viewed as one of the top two cornerback prospects through the pre-draft process, and as the first defensive prospect taken the Panthers will hope that he can become a foundational piece on that side of the ball to go with the likes of Brian Burns, Jeremy Chinn and Derrick Brown.

We’ve taken a look at the tape to see what made Horn so hard to pass on with the eighth pick, where he could get better still, and how this fits into the broader picture of the Panthers’ defense. 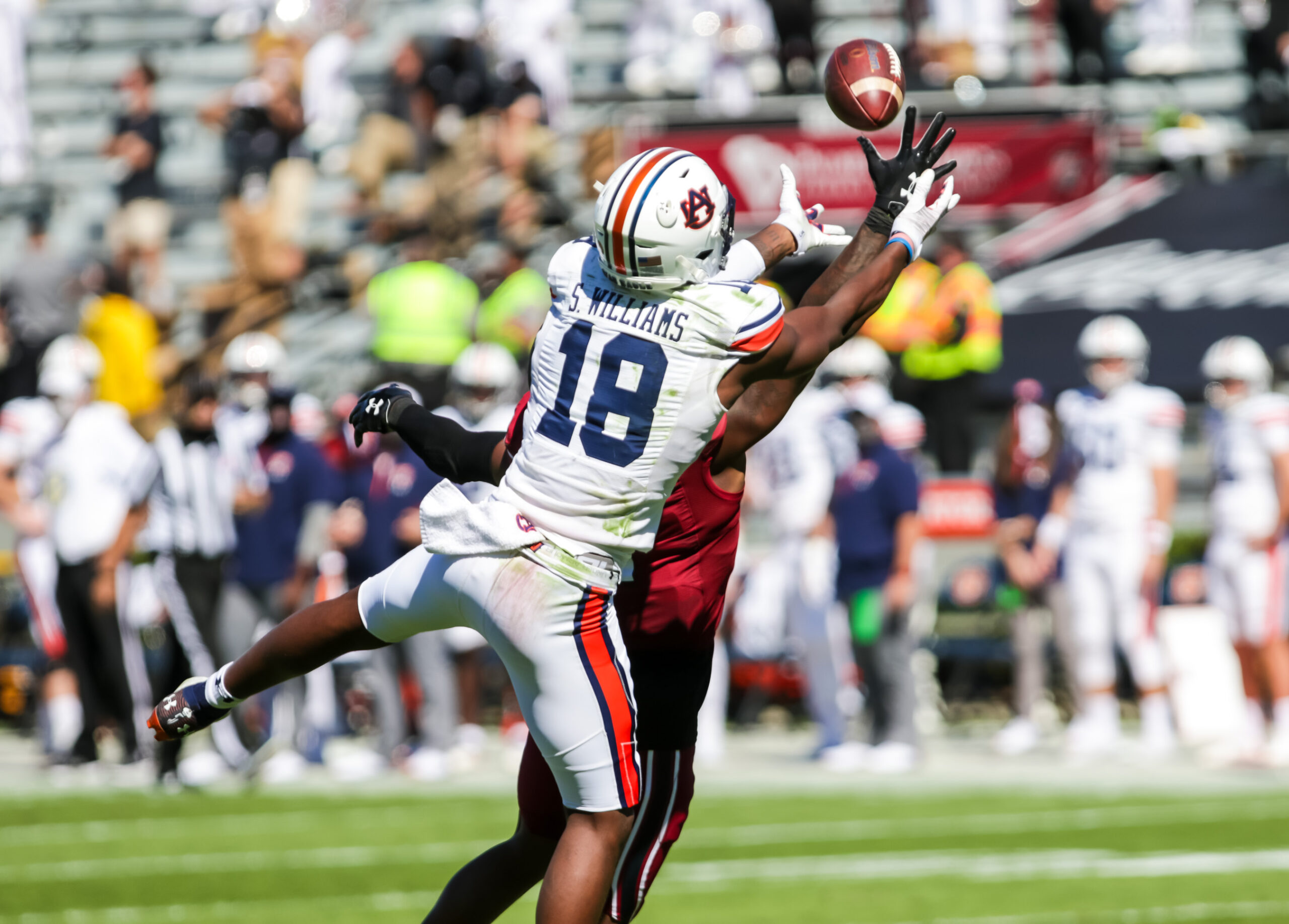 It is no secret that the NFC South has some big receivers, and Matt Rhule made a point of mentioning the value in being able to match up with bigger receivers for cornerbacks playing in the division.

“The big receivers we face week in and week out … it’s going to take a lot of guys who can cover, and who can cover really big men … there’s a size matchup in the NFC South that matters, and he checks that box for us,” admitted Rhule immediately after the pick.

“I definitely feel like that’s one of my strengths, being able to match up with big receivers because of my size,” Horn told the media last night via Zoom. “I also have the speed and feet to match routes well with those great receivers in the conference. I can definitely understand the thought process behind the pick and I’m definitely ready to go prove them right.”

From his measurables, Horn ticks pretty much every physical box possible. Standing at 6-1 and 205lbs and with 33″ arms he has the size and length that Rhule mentioned, and when you combine that with a 4.4 forty-yard dash, a 41.5″ vertical and a a 133″ broad jump you end up with a prospect who ranks second in Relative Athletic Score for all cornerbacks dating back to 1987.

Beyond being athletic, however, Scott Fitterer also spoke directly after the draft to what Horn does so well.

“His man coverage ability, his quickness, the feistiness of him as a player, his ability to mirror and turn and run with the receivers,” detailed Fitterer.

This is definitely born out on tape, where Horn shows an ability to complete remove receivers from the game at times (Horn wears #1):

But what goes into him being an effective man coverage player beyond the athletic numbers, and can he get even better? 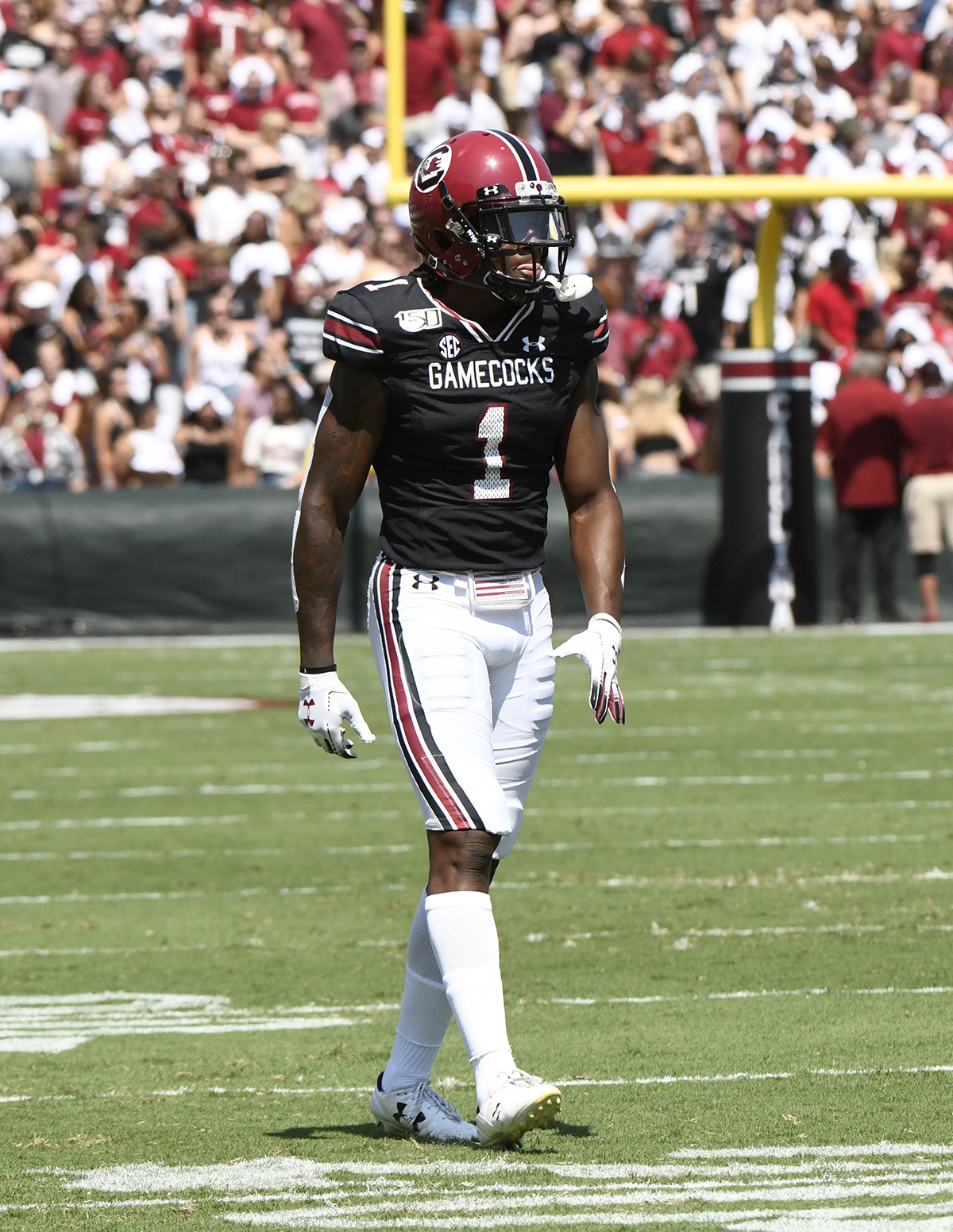 At the line, his footwork can be a little choppy but he does well to stay balanced and in front of his man, allowing him to mirror effectively:

And while he can get caught a little flat-footed at times, with his great quickness and lower body flexibility he is able to open his hips and run vertically with receivers from press:

A skill that he also demonstrates when working from off coverage:

He also makes good use of the boundary to compact the field for receivers and to disrupt the timing of their routes:

However, he does need to make sure that he continues to work on his footwork discipline at the head of routes, as he can sometimes get caught a little flat-footed or off-balance by better and more agile route runners:

Where he is at his best, however, is when he is able to get hands on receivers early and use his physicality to disrupt their routes:

Though he does need to be careful, as he can get quite grabby at times which led to some flags in college and is likely to lead to more in the NFL unless he is able to be a little more disciplined – this is something that can be handled with coaching at the next level:

What he does do exceedingly well, however, is contest at the catch point, and is ability to ensure that passes end up at least incomplete really shines on tape:

And while it might not always be super flashy, the way he is able to master the mental details of playing man coverage, such as the ease with which he makes the switch on the following play, is reassuring when it comes to projecting how quickly he will be able to adjust to the NFL game:

This is another thing that Fitterer mentioned when talking after they made the pick: “The immediate impact is why we did it … We like his ability to step on the field and to compete to start Week 1.”

It is also worth noting that the impact of having a lockdown man coverage corner can make on a defense. Not only did the Panthers’ secondary fail to set the world alight last season, they looked especially vulnerable in man coverage and the potential for improvement with a player like Horn on board is something that Matt Rhule was keen to describe.

The Panthers defense was second-worst on third down last season, allowing opponents to convert on 49.25% of their chances – almost half the time, the Panthers weren’t able to get off the field.

Being able to play more man coverage should also take some pressure off the front seven, but ultimately as an NFL defense you want to be able to give the offense different looks and Horn gives them an ability to match up with top receivers of all sorts. The appeal of this is obvious, and Fitterer was blunt about what Horn has the potential to be able to do for the Panthers:

“Cover a guy one-on-one, take away a side of the field,” said the Panthers GM. 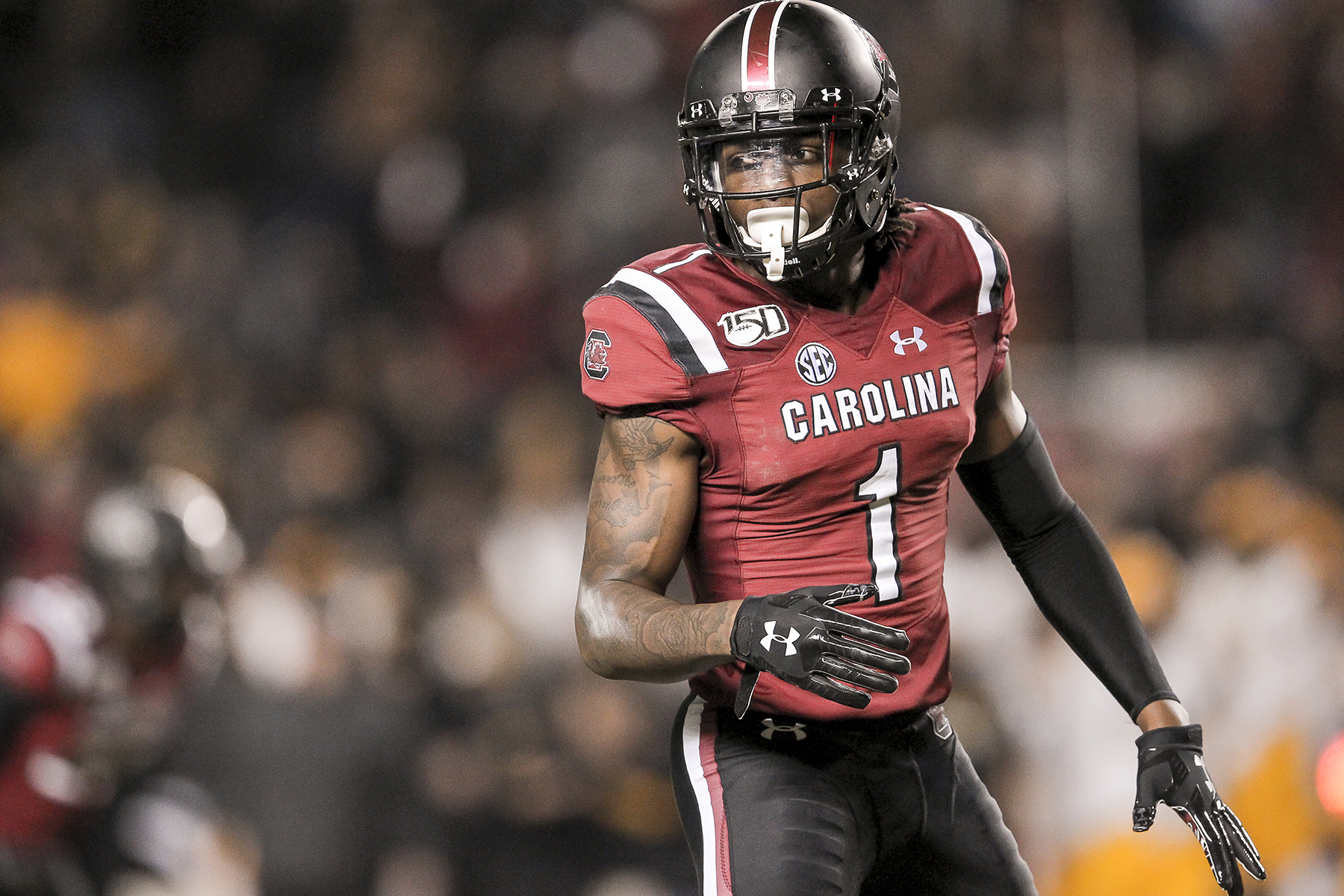 However, as important as playing man coverage at a high level is to Horn’s value, as Matt Rhule mentioned after the draft, the Panthers aren’t likely to become a team that plays exclusively man coverage, but what he also made clear is that when the Panthers do play zone, they often look to incorporate man aspects, meaning that Horn’s man coverage ability will have an impact beyond obvious man coverage situations:

“We’re always going to be really versatile with what Phil does, even within what people might call “zones” … we’ll single up a guy, we’ll lock about up,” Rhule explained, “Within our zone coverages there’s a lot of man components that, when you have a guy that can do it, really unlocks the coverages and allows you to do a lot more.”

With that said, the Panthers will also ask Horn to play some more conventional zone coverage reps, and here there are both reasons for optimism and room for further growth. His quickness allows him to close ground in a hurry to break on routes:

And he does flash the ball skills to turn chances into interceptions:

However, his footwork in off coverage can be quite flat-footed which can lead to him being a little slower out of his breaks than his natural talent suggests he should be:

Ultimately, Horn didn’t play as much zone as he did man, and so this is an area of his game where some projection is required, though he did at least show an understanding of leverage an responsibility when he did play in zone:

And while infrequent, there are flashes of the anticipation required to make splash plays on the back end:

Though there was also at least one play in the games watched where he missed a chance at a turnover, and actually allow a reception, due to a potential issue in tracking the ball in the air:

It is hard to make any hugely strong statements about Horn’s zone coverage ability based on his play at South Carolina in 2020, and while he has all the physical traits to be very good in this regard, the biggest factor will be his coachability, which the Panthers have fortunately had the chance to probe through Zoom interviews. He might not be an elite zone coverage player Week 1, but there is no reason why he can’t be with time. 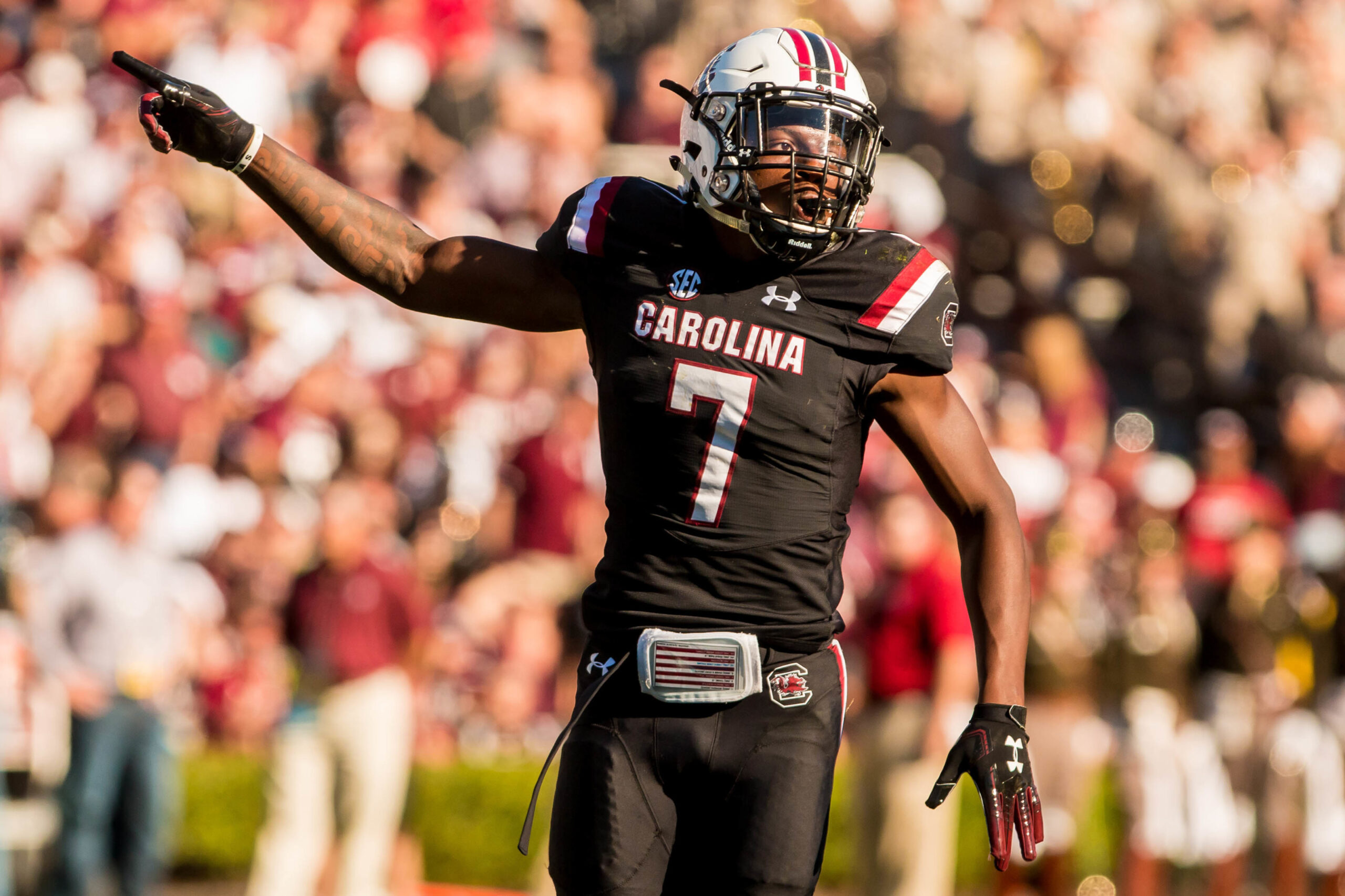 One are where he really does need to improve, however, is as a run defender, as while he certainly doesn’t lack for physicality of enthusiasm when taking on blocks:

He can sometimes work himself out of gaps unnecessarily:

And while he sometimes is able to lower the boom as a tackler, he would do well to stay on his feet and set a better base as his head-first approach can lead to some whiffs:

Ultimately, however, you draft cornerbacks for their ability to cover, and as a man coverage corner, Horn is very good, even if he can be a little grabby.

While he isn’t the most polished zone coverage corner, he is still just 21 years old and if he can turn the flashes he shows on tape into more consistent play when he get more quality reps in zone through the offseason and into training camp then he has a chance to be an excellent addition for the Panthers.