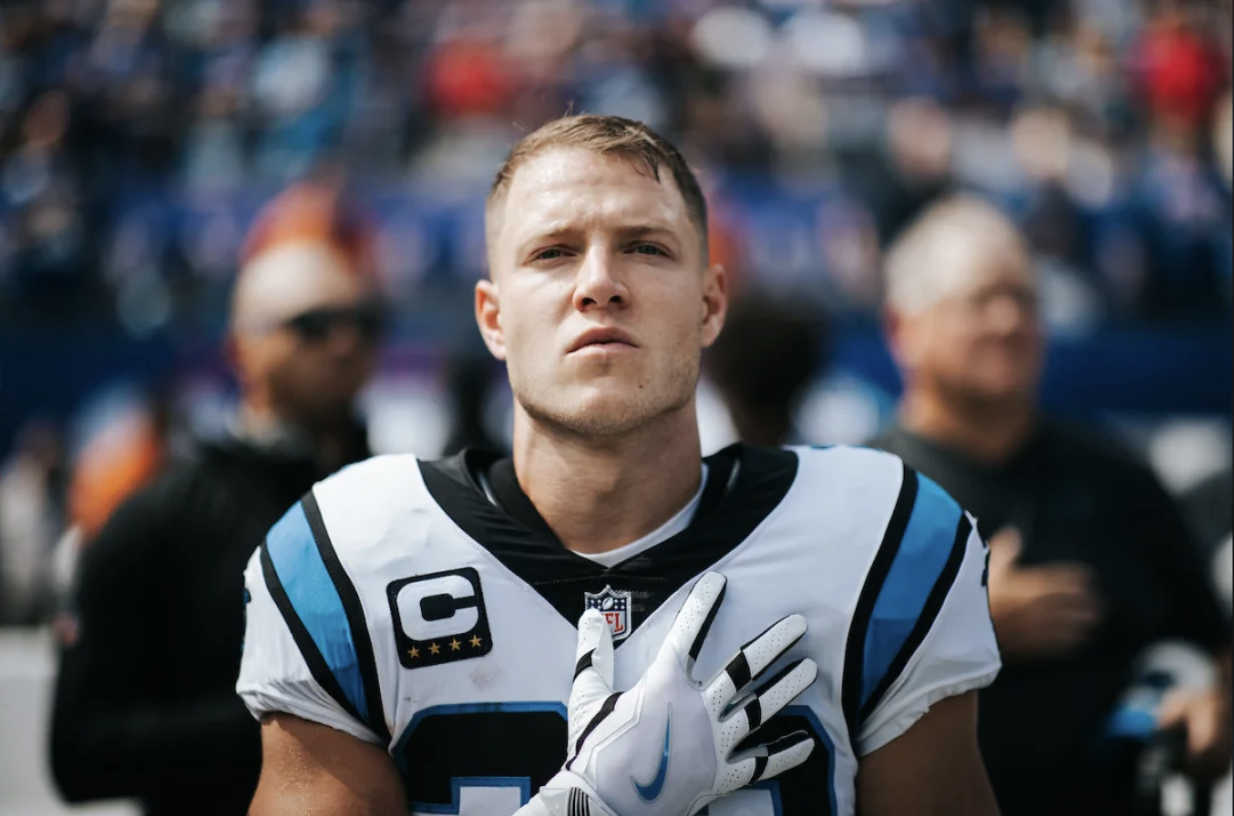 Today was arguably the most important Week 2 game in recent memory for the Carolina Panthers.

It’s fair to say that these first couple of weeks were the team’s best chances at wins as what most would consider the tough part of the schedule looms on the horizon. The very first play of the game was not a good omen for the Panthers and their chances in New Jersey as Chuba Hubbard fumbled the kickoff return and the Giants got the ball deep in Carolina territory.

Four short plays later, New York was on the board courtesy of a 36-yard field goal by former Panther Graham Gano.

“We just have to start off fast,” said DJ Moore, who had the Panthers only touchdown. “We can’t have a turnover on the first play on the kick return. That just set us back.” 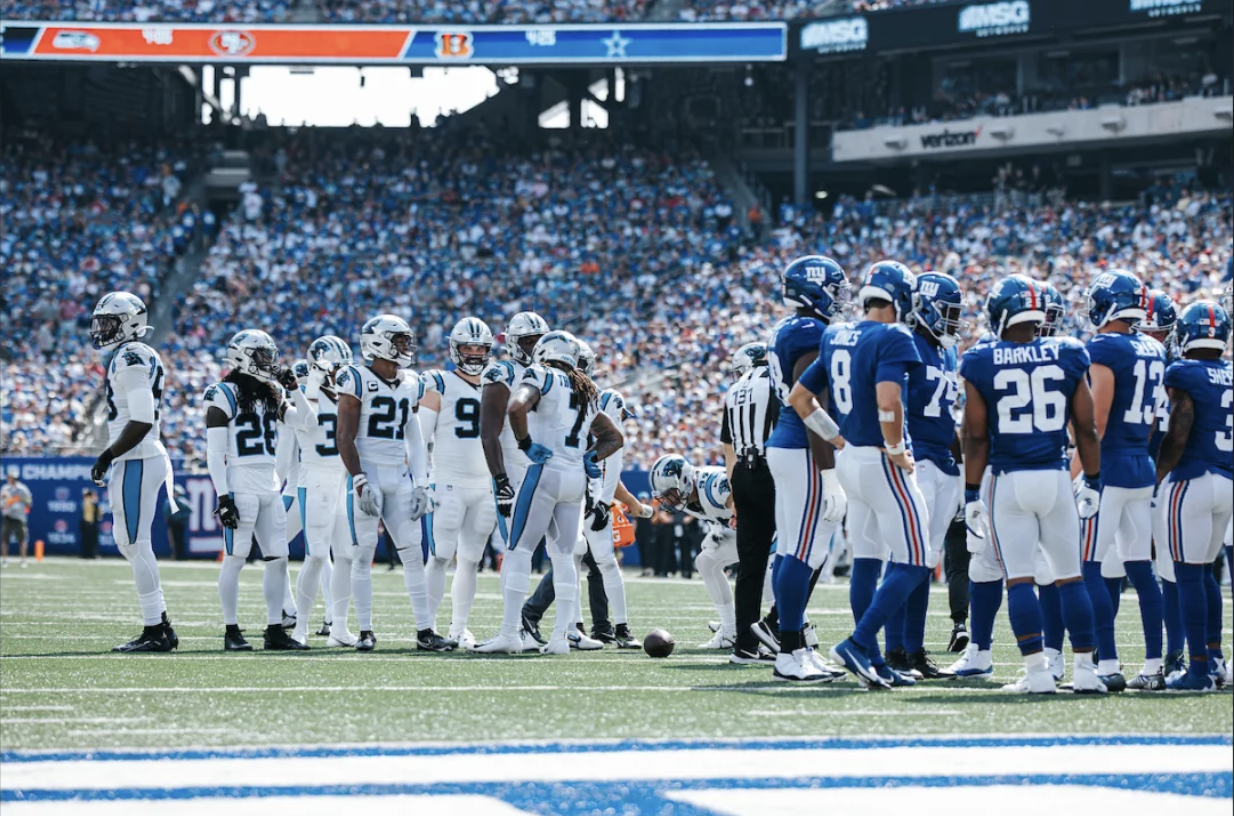 In an about face of last week, running back Christian McCaffrey got the first touch of the day, but ghosts of last week threatened to reemerge as Baker Mayfield’s first pass attempt of the day was batted down at the line of scrimmage. Facing third-and-long, Robbie Anderson fumbled the ball after a 4-yard reception; the Giants recovered at their own 40 and executed a 13-play drive that ate up 7:47 and culminated in Gano’s second field goal of the day.

New York went into the second quarter with a 6-0 lead, barely capitalizing on two Carolina turnovers.

On their next possession, the Panthers answered with a 31-yard field goal by Eddy Pineiro after a 13-play drive. The defense mitigated the damage of the early turnovers by forcing New York to settle for field goals in the red zone. Although the Giants didn’t punt until the second quarter, the game was still very much in hand.

Related:   What Can The Panthers Do To Slow Down Myles Garrett?

The Panthers even had the chance to take the lead on two trips to the red zone but ended up settling for three points both times. The run defense was a point of emphasis in the week leading up to the game – equally due to the abysmal performance against the Browns the week before as well as Saquon Barkley’s dominance on the ground in the Giants Week 1 victory. The emphasis worked in the first half as the Panthers held New York to zero net rushing yards going into halftime with the score knotted at 6. 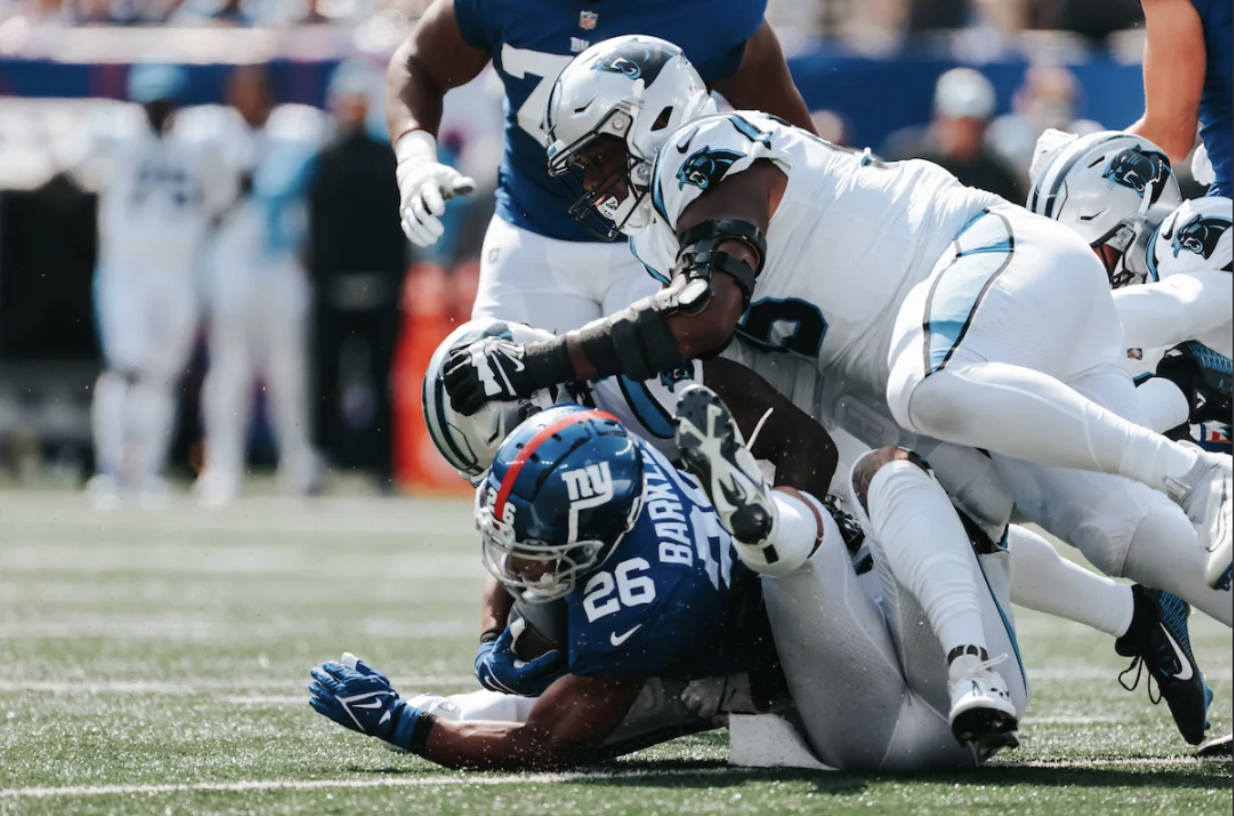 Carolina tends to lag in the third quarter, but today was different.

The offense put on a clinic fresh from the break as Mayfield hit DJ Moore for the game’s first touchdown and Carolina’s first lead of the day at 13-6 with 12:27 left in the quarter. Not to be outdone, the Giants answered with a 16-yard touchdown reception from Daniel Jones to Daniel Bellinger and the game was all tied up again 13-13 with 9:19 left in the third quarter.

Gano continued to be golden for the Giants, putting them ahead once again with a 52 yard field goal early in the fourth quarter.

McCaffrey broke free for a 49-yard run down to the Giants’ 26-yard line, the longest play of the game for the Panthers; however, they once again settled for three points as Pineiro drilled a 38-yard field goal to tie the game with a little over 10 minutes left to play.

In what came to resemble a duel between kickers, Gano scored the game’s last points as he booted a 56-yarder to put the G-men ahead for good with 3:34 left in the game. Any chance of tying or going for the win was sacked when Julian Love burst through the line to take Mayfield down for a nine-yard loss on third down.

“We’ve just got to be able to handle the pressure,” said Mayfield. “I mean that’s not anything that we weren’t aware of coming into this game. We knew that they’re a pressure team, that they give you Iooks, they make it hard on you to pass it off just from an identification standpoint.

It was hard for Ickey (Ekwonu) to be able to go from one person to the other and squeeze that down. That’s just a tough look. I’ve got to do a better job of being able to get the ball out and give us a chance to win right there. It comes back to overcoming stuff in the beginning and just handling it and not having to be in that situation in the end.”

With the lead and the ball, Daniel Jones scrambled for 11 yards on a pivotal first down to clinch the win – another failure to get off the field on third down for the Panthers. In what many perceived to be a must-win game for Matt Rhule, the Panthers fell to the Giants for the second year in a row and sit at 0-2 going into their first NFC South division game against the New Orleans Saints.