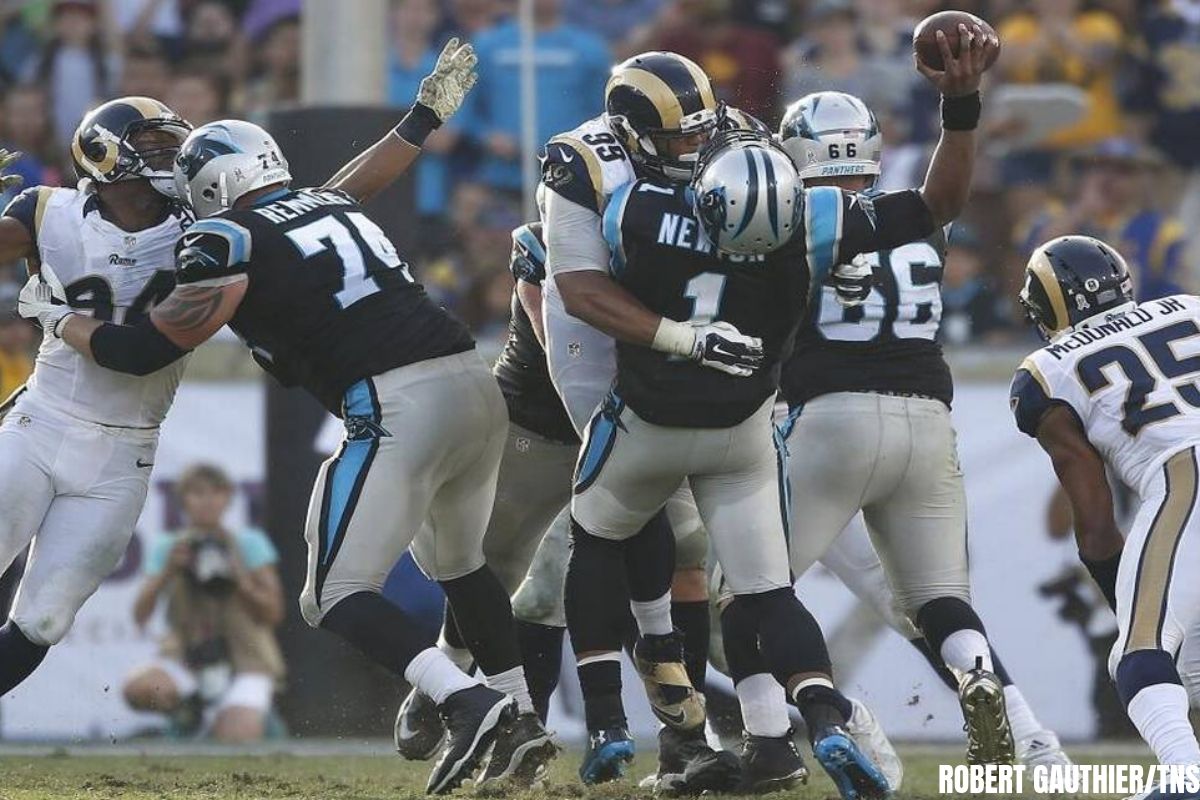 At long last the regular season is finally here, and there’s good news and bad news – on one hand, the front office has done it’s part to improve both the Panthers’ offensive line and pass rush, two critical holes in last year’s squad, and they begin the season at home.

On the other hand, Carolina’s first opponent is the Rams and with Los Angeles comes two-time reigning Defensive Player of the Year Aaron Donald.

Debatably the most outstanding player in all of football, Donald is one of the rare non-quarterbacks in the league that deserves to be paid QB money. His 20.5 sacks from 2018 are the most from a defensive tackle in NFL history. In other words, what we’re seeing from his first five years in the league is perhaps the best peak interior defensive play in NFL history.

“He’s number one in the league right now – seeing the hard work that he does and his resume on film, you’ve got to respect what he does. But at the end, if it’s got to be defense vs. defense, we can make that happen – but I’ll take us over anybody.”

Which brings us to Week 1 of the 2019 season. The Rams don’t have a starting pass rush as talented as the Bears or Browns, but Donald’s presence alone makes the guys around him better in ways few pass rushers can match. As a result, Carolina is faced with a monumental challenge in finding a way to somehow stop this athletic tank.

You might be thinking: The Panthers signed Matt Paradis to fill in the void at center. As a member of the Broncos when the Rams came to Denver last year in Week 6, surely he must have some experience against Donald? Well, kind of. To my surprise, when examining the tape, the Denver guards almost exclusively faced #99 in that matchup – it was rare to see Paradis face him.

With that said, there was one notable play from that game that involved Paradis going up against Donald, so let’s take a look.

…and the pass rusher cannot get through the A-gap to create pressure. However…

…the attention Donald gets on this play pays off for the rest of the Rams pass rush, as they are able to create pressure on Case Keenum, forcing him to climb out of the pocket.

Ironically enough, Donald collects the sack despite offering zero pressure initially. Simply put, this is a coverage sack, and in no way Paradis’ fault. It’s a dubious honor, but holding Aaron Donald to a coverage sack is almost an achievement in its own right.

However, we do have Donald’s tape from the last time the Panthers and Rams dueled, in Week 9 of the 2016 season. Carolina won on the road 13-10, but Donald proved to be a thorn in the Panthers’ side, producing four tackles, two sacks, three tackles for loss, and two quarterback hits. As you could have guessed, he was a massive inconvenience for Cam Newton.

On this play, Donald (highlighted by the blue arrow) was not credited for a sack or a hit, but set a sack up with the intense amount of pressure he created.

In this game, Donald was going up against then backup center Gino Gradkowski, filling in for the injured Ryan Kalil.

As you no doubt have figured out, the starting veteran got the upper hand over the backup on this rep.

Donald’s quickness and agile movement are unfair tools for an interior offensive lineman to go up against. He can’t get the sack, but he sets up Chase Thomas to do so, and Newton is taken down for a loss. This play is a perfect example of how Donald’s presence sets up his teammates for success – even if he’s not credited on the box score.

On the next two plays, however, Donald gets his sack.

The Panthers call for play-action with zone blocking to the right on this play. Donald is held in check, or so it would seem.

Before Newton has any chance to take a shot down the field, Donald has completely overpowered Gradkowski and the quarterback is taken down once more.

Donald has the agility and quickness you would expect to see more out of an edge rusher, while combining that with insane levels of power. Some might say he transcends the typical role an interior pass rusher has as a result, and it’s easy to see why when he’s making plays like this.

Anyway, the speed and power are too much for Gradkowski to handle, and Donald goes through him like a turnstile to pick up his first of two sacks on the day.

And the pain didn’t ease up on the second sack, as Donald was far more catastrophic on this rep.

This time, former Panther guard Andrew Norwell becomes the victim, and with a swim move counter…

…Donald seeps through the B-gap…

…and devours Newton. Let’s look at it in full motion to get a good idea of how insane Donald was here.

Norwell clearly expects a bull rush from Donald, who has something else in mind. With a little stutter step, Donald evades Norwell’s blocking and jacks Newton up – plays like this exemplify the amount of hits Cam has had to sustain throughout his career – I’m surprised he didn’t suffer an injury here.

The obvious takeaway from this article is that Panthers interior needs to have 2-3 guys blocking Aaron Donald whenever they can. Lining him up against Matt Paradis or right guard Trai Turner would be more preferable than say lining him against Greg Van Roten, who has had his struggles as the left guard – but as you saw against Norwell, Donald can make even the best linemen look silly.

The situation may look hopeless to Panthers fans, but there is a way to negate his presence, and it’s beyond his control. The Rams are noted for having one of the weaker linebacking corps in the NFL, so I expect Christian McCaffrey to be heavily involved on dumpoffs, checkdowns, and other quick throws that were present in Norv Turner’s scheme last year.

This can get the Panthers by – to an extent – when it comes to facing Donald, but on plays where Newton is forced to hold onto the ball for an extended duration to wait for longer routes to develop, AD presents a huge problem for the interior pass protection. Signing Paradis was massive for the Panthers because of threats like this, and this might just be the saving grace for Carolina’s offense during a day where #99 is expected to have a huge performance.