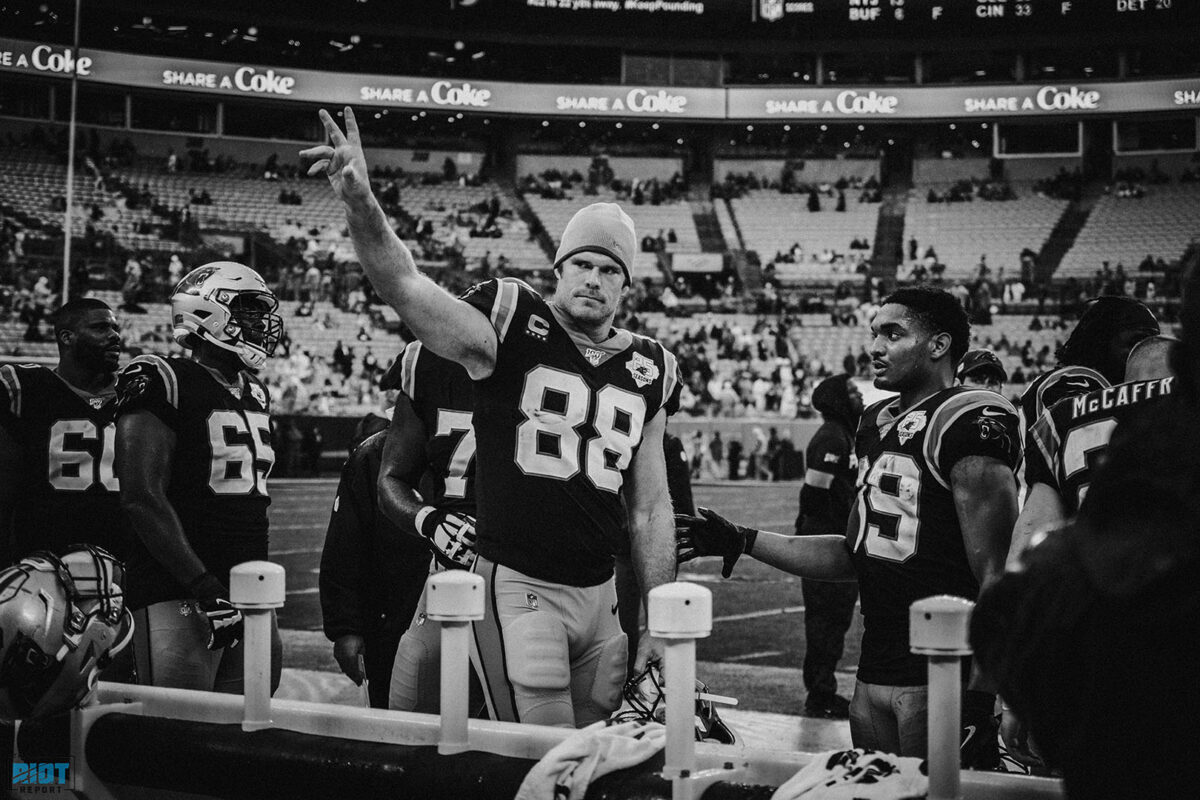 Once fall comes, the Carolina Panthers will be back on the football field for their 26th season of NFL competition. They’re going to play at Bank of America Stadium in uptown Charlotte, and feature many of the same players in the same uniforms they’ve always had.

But they’re not going to feel like the Panthers many have come to know and love.

Over the past two years, no team in the NFL has seen more change from top to bottom than the Carolina Panthers. Ownership of the franchise, stable for nearly a quarter-century, now lies in the hands of the gregarious and ambitious David Tepper – as a result of his ambition, Carolina has undergone a major revamp. From the team’s facilities, to the way it throws its weight around in the area and it pursues the goal of being a winning football team, everything is changing for the Panthers at a pace rapid enough to make the heads of the stadium statues spin.

Plenty of the changes that have been made to Carolina have been good ones. But it is where the human element of change begins that matters become problematic.

During the Panthers’ glory days of the 2010s – a period that saw the team win the NFC South three straight seasons, go to the playoffs four out of five years, and make it to a Super Bowl with the best record in the NFL – emotional bonds formed between fans in the Carolinas and the players who became their heroes. Through witnessing their play and performance on Sundays as well as the great character they represented the franchise and region with, players like Cam Newton, Luke Kuechly, Thomas Davis, and Greg Olsen all became lionized as franchise greats. And at some level of the subconscious, there was surely the idea that the day those men would no longer be Panthers was a long way away.

But all fans, resist as they may, will grant that day had to come eventually. And after the 2018 season, there was a certain begrudging acceptance of that. Maybe Thomas Davis, though still a Pro Bowl-caliber linebacker, had lost a step. Maybe Julius Peppers couldn’t attack opposing quarterbacks at 39 the same way he could when he was 25. Come December, when longtime head coach Ron Rivera was fired with four games left to play, such ideas emerged again.

Maybe his time had run its course. Maybe it’s better this way.

By the time the calendar turned to 2020, plenty could talk themselves into the necessity of departure. What has happened since, however, has felt less necessary and more excessive. 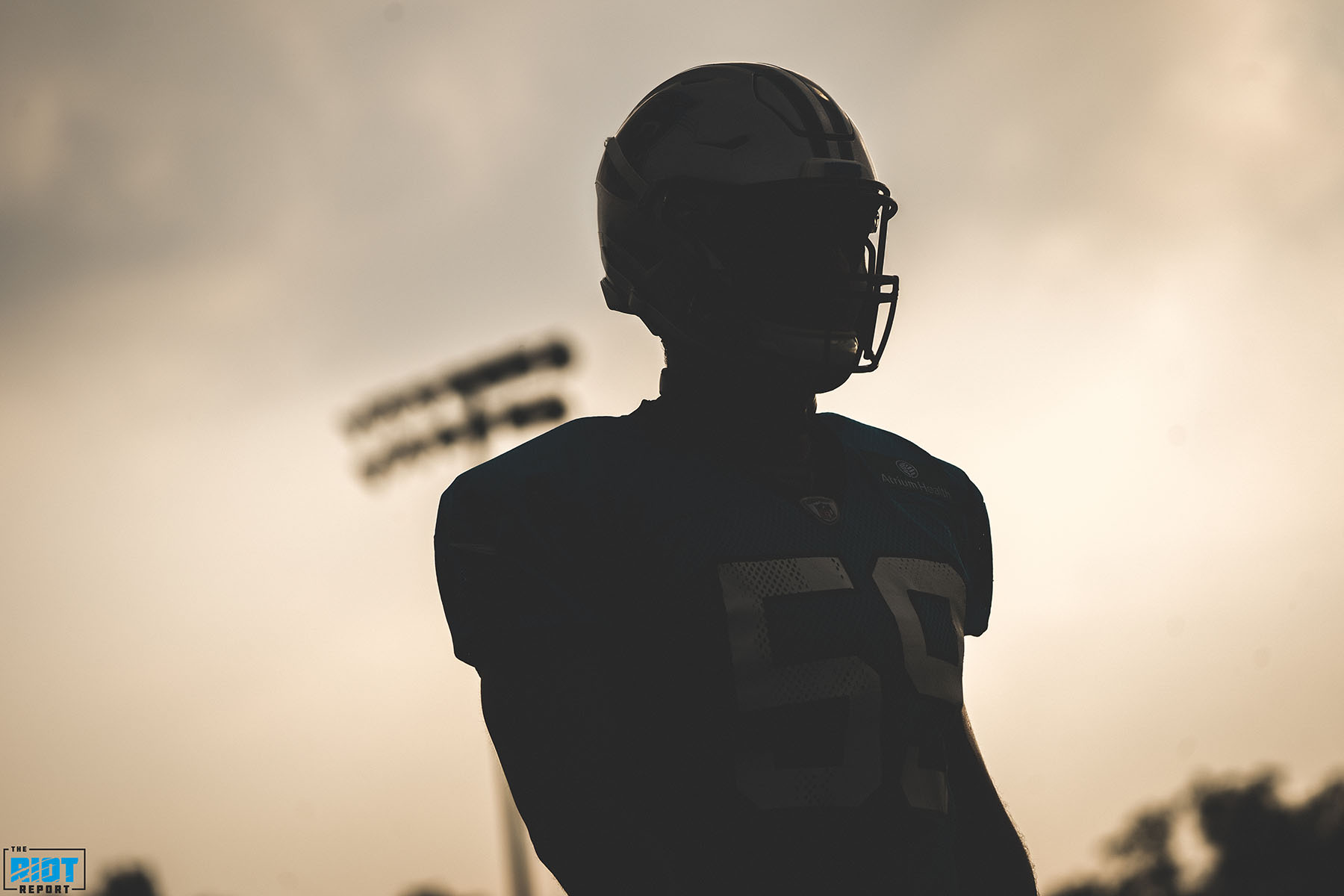 Dreaded as it may have been, the end of Greg Olsen’s days as a member of the Panthers had been an expected one, particularly after the team’s season finale turned into an impromptu farewell to Carolina’s tight end of the 2010s. But any easing of the blow of Olsen’s presumed departure was flung off the table when middle linebacker Luke Kuechly, still an All-Pro and still appearing to be in his prime age-wise, shockingly retired shortly after the conclusion of the season. With the suddenness of Kuechly’s exit, the old core of Carolina’s great teams went from receding into the night to being thrust into it – adding to a collective sense of dread and uneasiness over what is to come.

“This is a team that went from needing a new coach to help implement some new things,” observed franchise great Steve Smith on WFNZ, “To all of a sudden –  it kind of looks like a rebuild.”

There have been lean times in the history of the Panthers before.

After all, they’ve been the worst team in the NFL twice (2001, 2010) and have never before managed to have back-to-back seasons with a record over .500. But as the Panthers undergo such massive changes, there is a unique emotional element that the team now has to handle very delicately. When David Tepper bought the Panthers from team founder Jerry Richardson during the 2018 offseason, he inherited a team that was among the creme de la creme of the NFC and still resembled its Super Bowl 50 team. Though the franchise had certain issues that needed Tepper’s immediate attention, the on-field product he inherited was far from poor.

While that has since changed, plenty of the players and coaches who the Panthers have moved on from are those who were responsible for good times past. It gives the impression of the baby being thrown out with the bathwater – and it hardly helps when a player like Olsen contradicts the company line that his parting with the Panthers was a “mutual” decision.

“The ‘mutually parting’ might have been a little bit overblown. The reality is they weren’t going to bring me back at my current contract and with my age and the direction of the team,” said Olsen last week in an interview with WFNZ’s Wilson & Parcell. “I understood it, but I didn’t force my way out of here. I told them, I said ‘You guys want me back, and I have a place on this roster come July, then that’s a whole different story.’ That wasn’t me deciding I was gone – That was me kind of reading the tea leaves through some stuff internally that was going on.

“I’ve been around long enough to kind of see the writing on the wall. And that was just more along the lines of ‘Ron’s gone, all the assistants are gone, it’s kind of a new regime, new transition. Sometimes the old, expensive guys – regardless of their careers, regardless of their abilities – they kind of get the first axe, so to speak.” 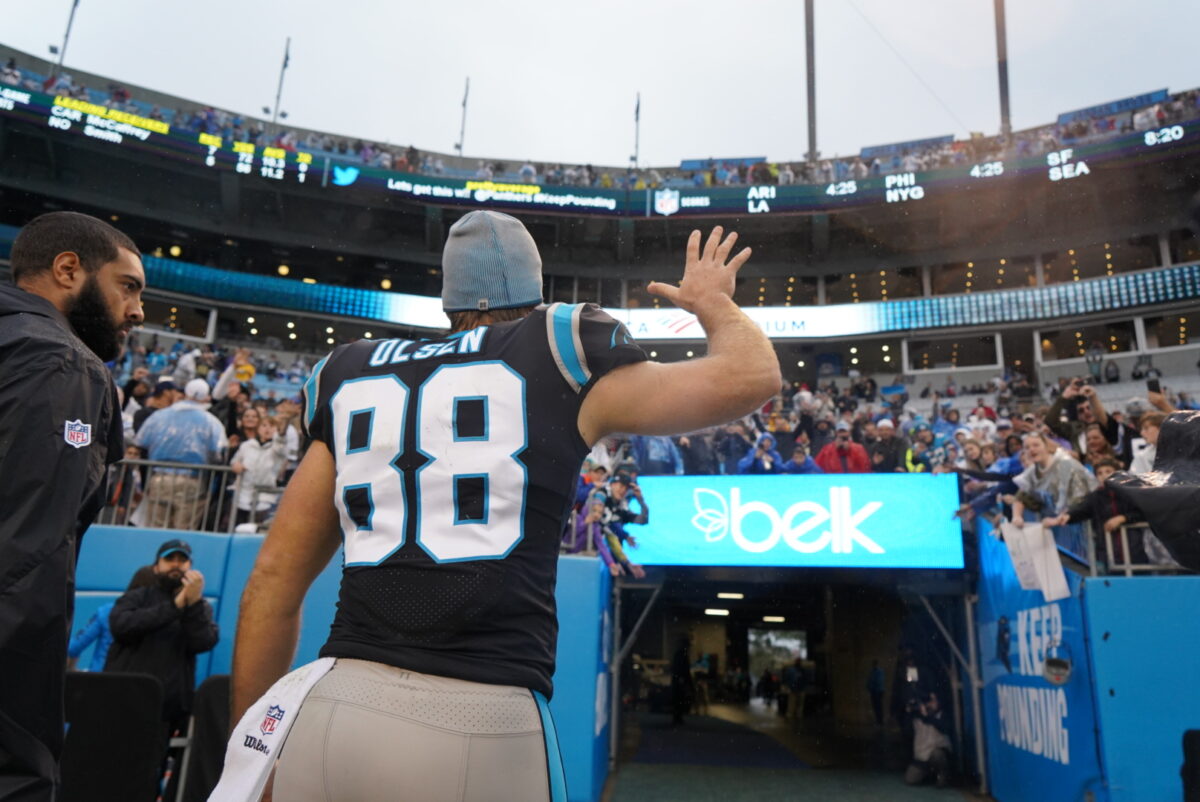 The “direction of the organization” has become a phrase that amplifies the trepidation and uncertainty over Carolina’s short-term future. After Tepper parted ways with Rivera last December, he mentioned the necessity of the Panthers’ fanbase to have “a degree of patience to build sustained excellence.” – comments that could easily be construed as signaling a rebuild at best and an outright tank-job at worst, both of which would waste the remaining prime of multiple franchise stalwarts – and would have wasted Kuechly’s last years as one of the NFL’s top linebackers.

In his statement announcing his retirement, Kuechly made a point to say that his decision had “nothing to do” with the arrival of Carolina’s new coaching staff. However, when discussing Kuechly’s retirement on the Super Bowl’s Radio Row, Rivera let on that the state of change on the Panthers indeed factored into his choice to step away.

“I had an opportunity to visit with Luke beforehand, and just listening to him talk, it was one of those things where the right situation, the right moment in time had come,” Rivera told The Pat McAfee Show. “He had battled through several injuries early on, and then a lot of his guys were leaving. There was a transition going on with the organization. So the timing for him, he felt, was right.”

The Panthers are far from the first team to ever have to go through a period of transition and they most certainly won’t be the last. However, it’s always easier to sell a fanbase and a region on change when times are good, the organization is stable, and the team is still winning – which isn’t the case for the Panthers.

Over the past two years under new ownership, the Panthers have had two straight losing seasons with two straight second half collapses. They haven’t won a game since last November, and by the end of the 2019 season were arguably the worst team in football. A mass exodus of pillars of the franchise has occurred, and the departure of quarterback Cam Newton – the true north of Panthers football – seems well within the realm of possibility. While this is going on, ticket prices for Panthers games have gone up since Tepper took over ownership, in the name of the Panthers’ various new projects and improvements to infrastructure.

At present, the relationship between Panthers fans and their team seems a strained one – According to a report by Ronnie Glassberg, attendance at Panthers games in 2019 dropped to its lowest point of the last decade and the team had the 10th largest drop in attendance among any team in the NFL. It requires little stretching of the imagination to envision a scenario where fans balk at their team letting go of Cam Newton and committing to the highest draft pick possible – all while asking for more money at the ticket booth.

Related:   Luke Kuechly Was A Panther And We Are All Better For It 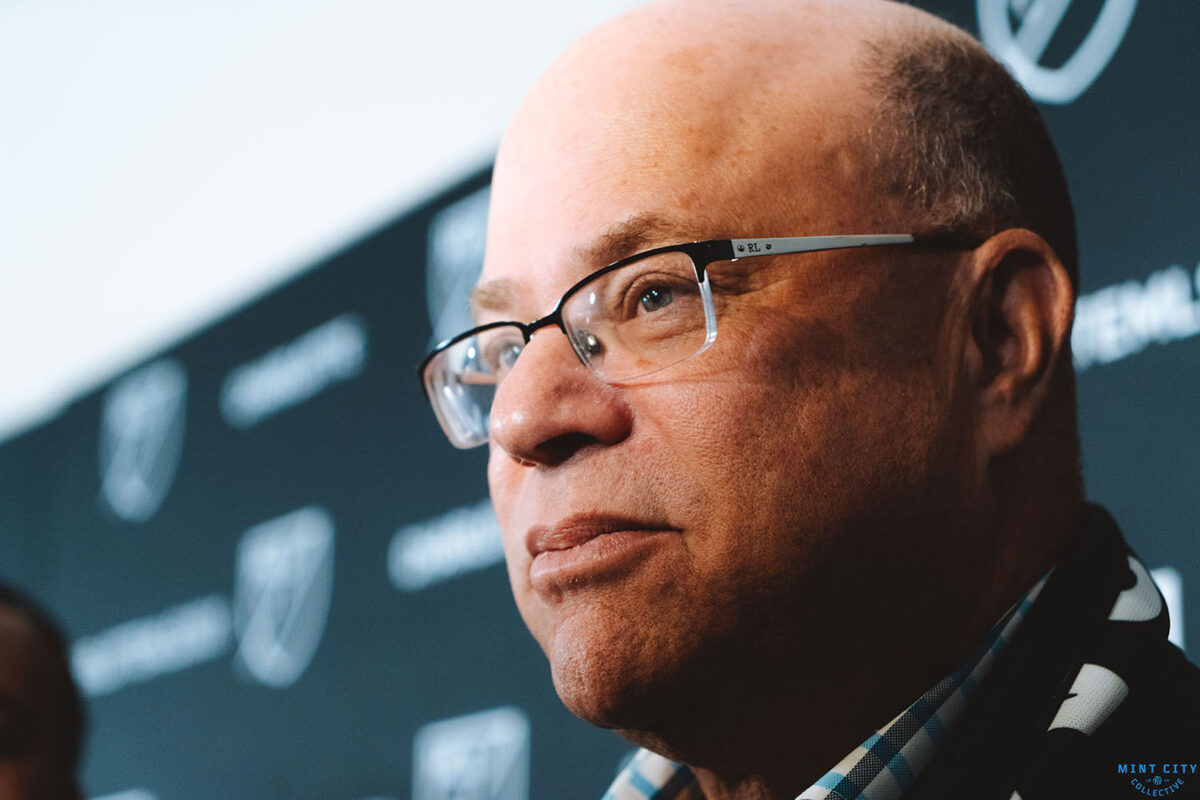 In nearly two years as owner of the Panthers, Tepper has done well to build goodwill between himself and the Carolinas. But while he talks of establishing sustained success and a standard of winning for the Panthers, he has yet to prove that his idea of putting together a winning football team is one that works. And the Panthers’ record over the past two seasons, 12-20, is one that he bears responsibility for, just as his front office and previous coaching staff do.

Because of that, there’s still an air of fear of the stranger that surrounds him. As much as he has tried to assimilate himself into the region, he is still an outsider who inherited a good situation and proceeded to change everything – even the things that people were comfortable with and didn’t want to change.

That isn’t to say that what the Panthers are doing now under Tepper is wrong – this will likely take time, and frankly, the Panthers’ long-trusted way of doing things wasn’t exactly foolproof. If it was, they wouldn’t have that special distinction of never having back-to-back winning seasons. But the process that Carolina is taking to fulfill Tepper’s vision has quickly become one that, for many who became attached to the good old days and those who were involved with them, is distressing and borderline painful to witness. Instead of being eased away from the past and towards the future, fans have suddenly been tasked with having to let go – ready or not, and like it or not.

Change doesn’t always have to be a bad thing, and it doesn’t have to be bad that the Carolina Panthers are changing. But when the change becomes too much is a question each fan will have to answer for themselves.