Dispatches From Charlotte: Panthers Return to Practice In The Shadow of the Bubble 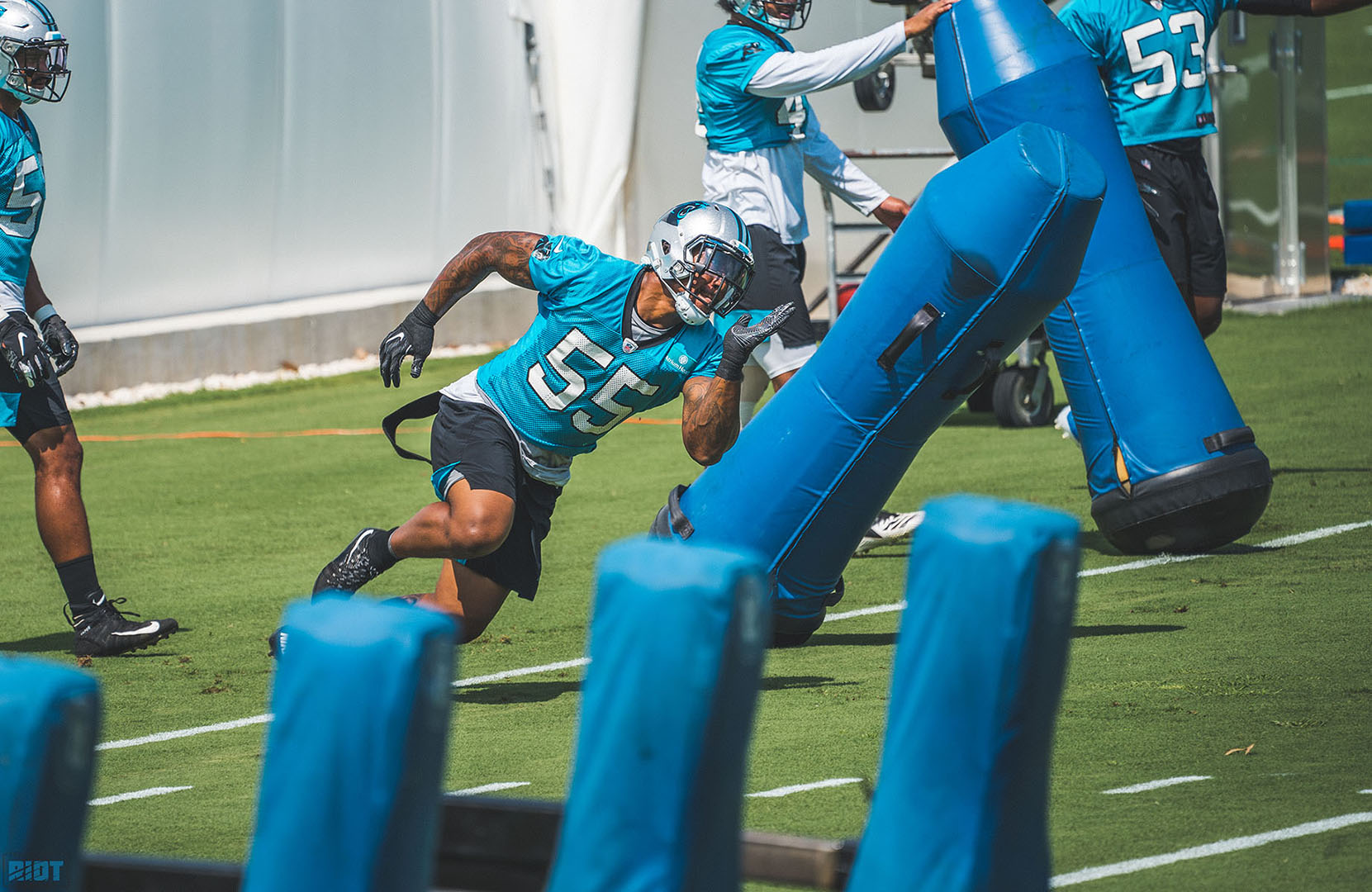 The Panthers practice fields had a new look to them Sunday as the Panthers got out there for the second time – their walkthrough for Buffalo was on the fields Wednesday – field three, the only field that stretches the full 100 yards sits in the same place, but a 60 yard field is perpendicular to one end zone and, of course, the bubble looms large with it’s turfed field contained inside; surrounding the fields, the fences are lined with the logo of Atrium Health, who have obviously paid a lot of money to sponsor the practice fields and don’t want you to forget it.

The rest of the space is dotted with blocking sleds, tackling dummies and other football equipment as the Panthers and their staff continues to feel out the best way to utilize the space.

Finding the best use of space wasn’t the only struggle today, with players trying to find the bathroom early in practice – it’s inside the bubble – and then trying to access the bubble itself. JJ Jansen walked around and tried all six doors unsuccessfully before someone let him in so special teams could do some warmup kicking on the turf that’s similar to the one they’ll be on in New England later this week. The rest of the team will practice in the bubble tomorrow, but today they practiced under the brutal sun that drove players like Kyle Love, Curtis Samuel and Cam Newton to the shade of trees on the side of the field during certain drills they weren’t a part of and during water breaks.

Overall, even though the surroundings looked a little bit different, it was business as usual once the players strapped on their helmets and shells, with Cam Newton yelling “Game week!” as the team stretched.

Newton is expected to play Thursday for the first time this preseason.

“It’s just back to the grind, it’s the same thing,” said Ron Rivera after practice. “I think the guys came out and practiced really well today, considering the heat and we’ll take a little bit off of them tomorrow, but I thought they did a nice job.”

“It is definitely, most certainly nice to be home. We’re still in training camp, we’ve still got things left to do today, but it’s good to be back in Charlotte.” 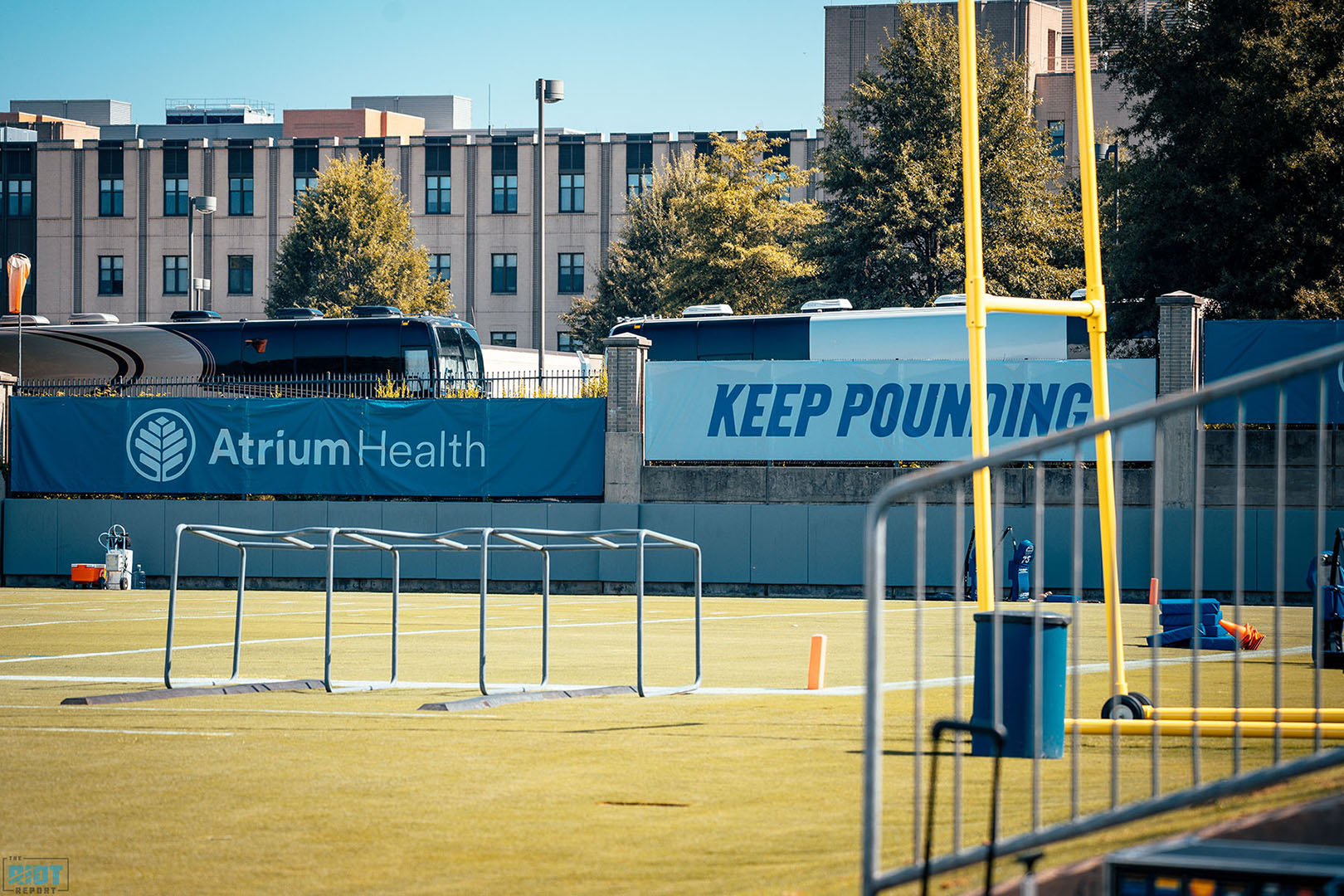 Welcome back to Charlotte

“I think especially in the past two years, things are really taking off in terms of everything Mr. Tepper is kind of bringing to the table,” said JJ Jansen, who’s been with the Panthers since 2009. “Obviously, getting the bubble, alterations on the interior [with] the cafeteria and the weight room, stuff like that – but the way we practice, the information, has been new. There’s been a lot of nice evolution here in the last couple of years – but it’s a steady progress. When I was first here, there was virtually nothing downtown that you could see, now there’s the apartment buildings. Everything’s changing, it’s the facility, it’s Charlotte.”

“It looks very different than when I just got here, but year by year, you kind of forget what it used to look like.”

Soon enough, we’ll be forgetting what it looked like without the bubble.

While Colin Jones, Kevon Seymour, Vernon Butler, Shaq Thompson, Brandon Greene, and Kitt O’Brien worked on the side with trainers, tight end Ian Thomas returned to practice after missing last week with a rib injury. The second-year tight end also missed most of spring workouts with a leg injury, so he needs all of the practice time he can get if the team plans to implement more two tight end sets into their system.

“It really was good to see him out on the field, he did a couple of nice things, so he’s starting to come back now and he’s got a lot to learn and a lot of work to get done before the opener, but it’s really good to see Ian running around and he’s going to be a part of what we do,” said Rivera after practice. 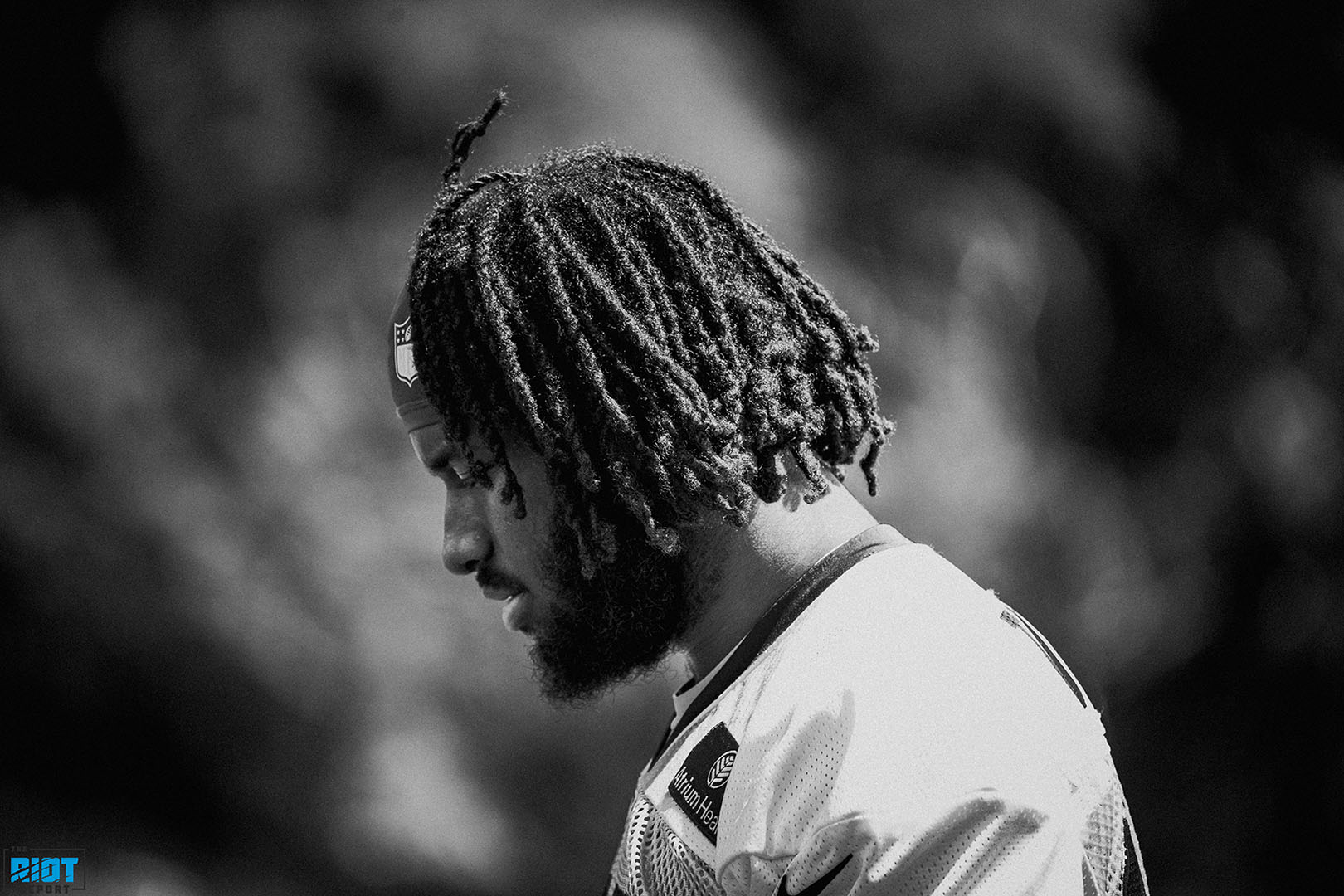 The session today was a good day for the secondary, with Corn Elder picking off a Kyle Allen pass and James Bradberry – who joked last year in the locker room that he’s good for two interceptions a year – getting two today off Cam Newton, one off of a tipped pass and the other as he jumped a slant route over the middle. Donte Jackson broke on a throw to the flats, prompting a yell from the defense that he was ‘about to pick-six that shit’.

The defense was louder than usual, likely due to the addition of Tre Boston to the first team at free safety.

His back-and-forth with Cam Newton was vocal and varied – at one point, he intoned Wyclef from the sidelines when a blitzing linebacker came free up the middle for what would have been an easy sack – but the quarterback got the last laugh as he launched a 50-yard bomb to Aldrick Robinson into the area that, judging from Cam’s reaction, should have been occupied by Boston.

‘Tre, Tre, he’s our man, if he can’t do it, nobody can,” Newton gleefully sang sarcastically as he danced and celebrated.

“You can see [Boston] start to come into form….with him, it’s just getting the reps and getting down the new tweaks,” said Rivera after practice. “A lot of it is very similar to when he was here, there were some new things that we did add, but I do think he’s coming along very, very nicely.”

Asked about the talk between the offense and the defense, Rivera grinned.