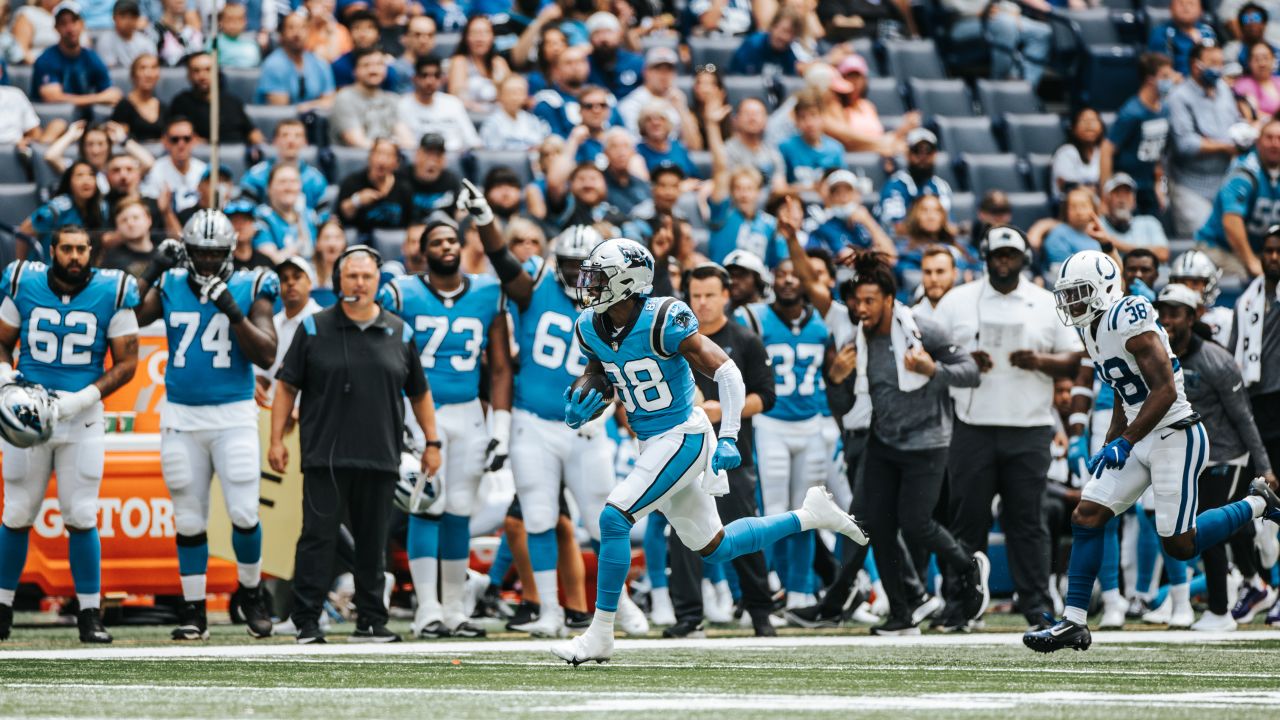 The Panthers would have preferred not to have fallen to a late field goal in Indianapolis on Sunday but, seeing as this is the preseason, what were more important than the final score were the various performances on show. On a night where a number of the rookie class made a promising impression and the Panthers managed to win the turnover battle against a team that went 11-5 a year ago, there were certainly a number of positives as well as the inevitable negatives at this time of year.

So, with that in mind, here are some players (or groups of players) who made a notable impressions one way or the other, and as well as some thoughts on how that might impact the shape of the Panthers’ eventual final roster.

Let’s start with the positives. 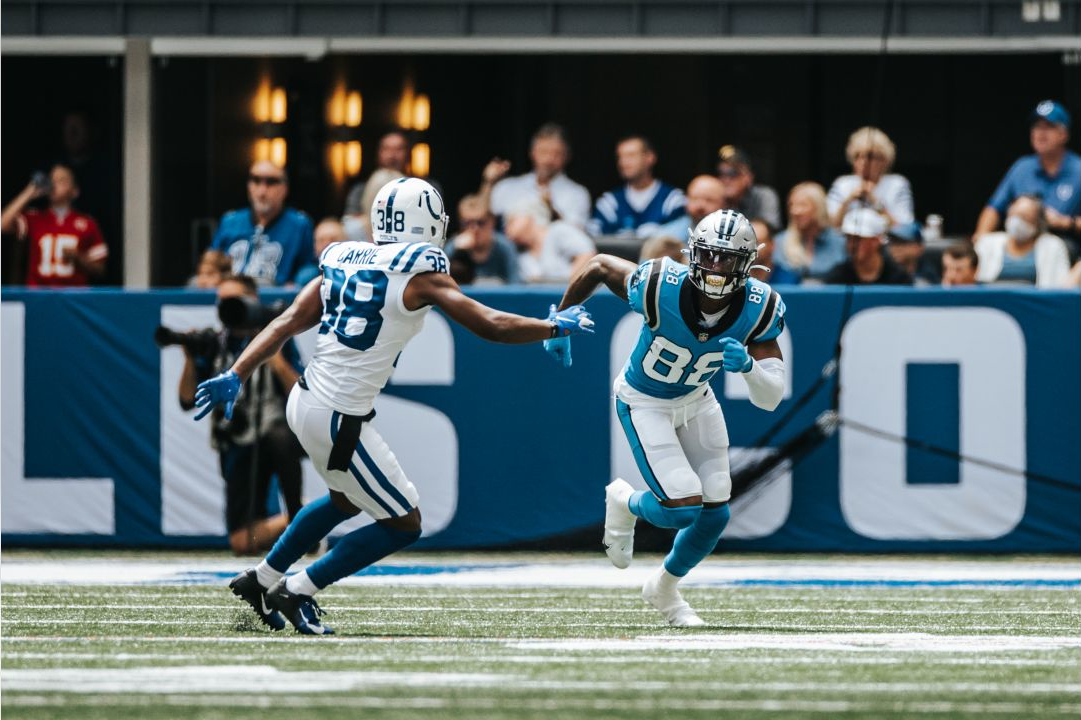 The Panthers’ biggest loss of the offseason was almost certainly that of Curtis Samuel, who departed to Washington on a three-year deal, and how the Panthers might be able to replicate his production this season was one of the bigger questions for the preseason. While it’s only one game, the three main receivers the Panthers brought in to help replace him all made significant positive impacts in the first half against the Colts. Something that Matt Rhule highlighted after the game.

“I thought David Moore did some nice things” said Rhule, “Shi (Smith) had that one catch, which was a really nice play, and Terrace … it looked like we did some good things at times.”

David Moore, who signed on a two-year deal from the Seahawks, notched two receptions for 26 yards including a notable third-down play over the middle; Sixth-round pick Shi Smith turned his one target into a 26-yard reception to set-up the Panthers only score and, most impressively, second-round pick Terrace Marshall Jr caught three of his five targets for a total of 88 yards. Notably, PJ Walker was 6-10 for 140 yards when targeting these three, and 4-11 for 21 yards when targeting everybody else.

While there is still significant competition for the places below them, Marshall, Moore and Smith look to have the third, fourth and fifth receiver spots locked-up. 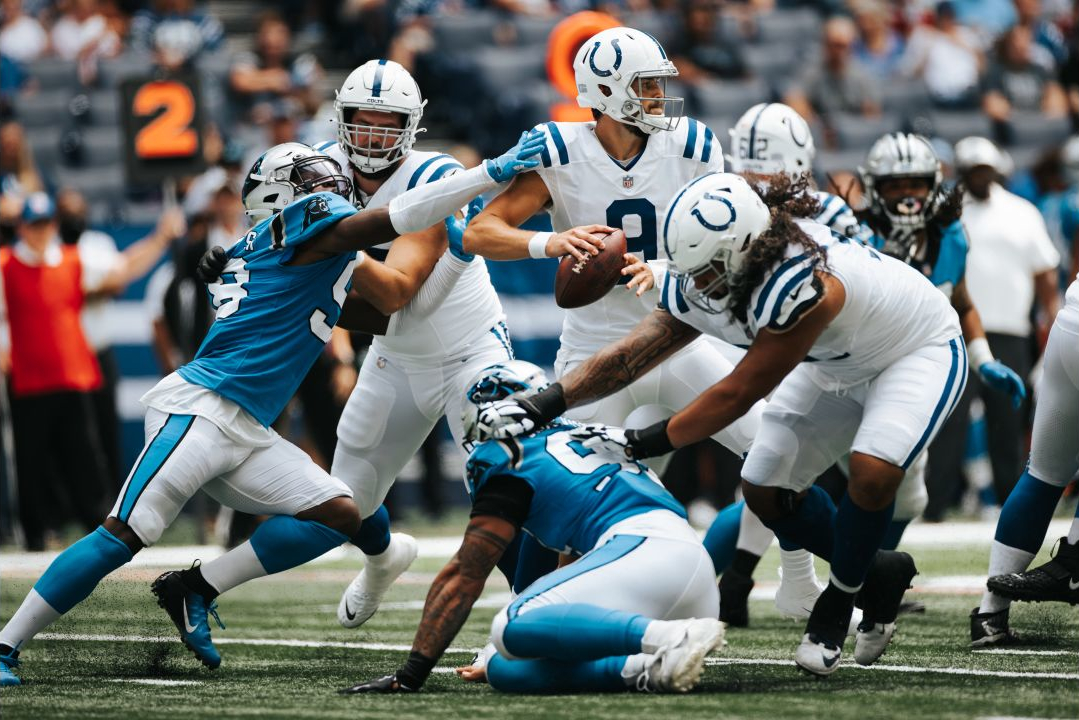 When your EDGE depth chart starts with Brian Burns and Haason Reddick, it’s likely to be a pretty strong group regardless, but even with free agent signing Morgan Fox being rested the Panthers were able to get a notable impact off the edge throughout the first half on Sunday. Marquis Haynes, Yetur Gross-Matos and free-agent signing Frankie Luvu recorded all three of the Panthers sacks on Sunday, one of which led to a fumble and subsequent recovery for the Panthers’ first turnover of the game.

Not only were they able to record sacks, but the first-half rotation of those three and Christian Miller; who returns after opting out of the 2020 season; recorded a further two QB hits and were able to cause the Colts’ tackles consistent issues on the edge. Whether the Panthers will be able to squeeze all four players onto the roster alongside Burns, Reddick and Fox is yet to be seen, but after struggling for sack production outside of Burns a year ago, this year the Panthers certainly have a depth of edge rush to rival the NFL’s best. 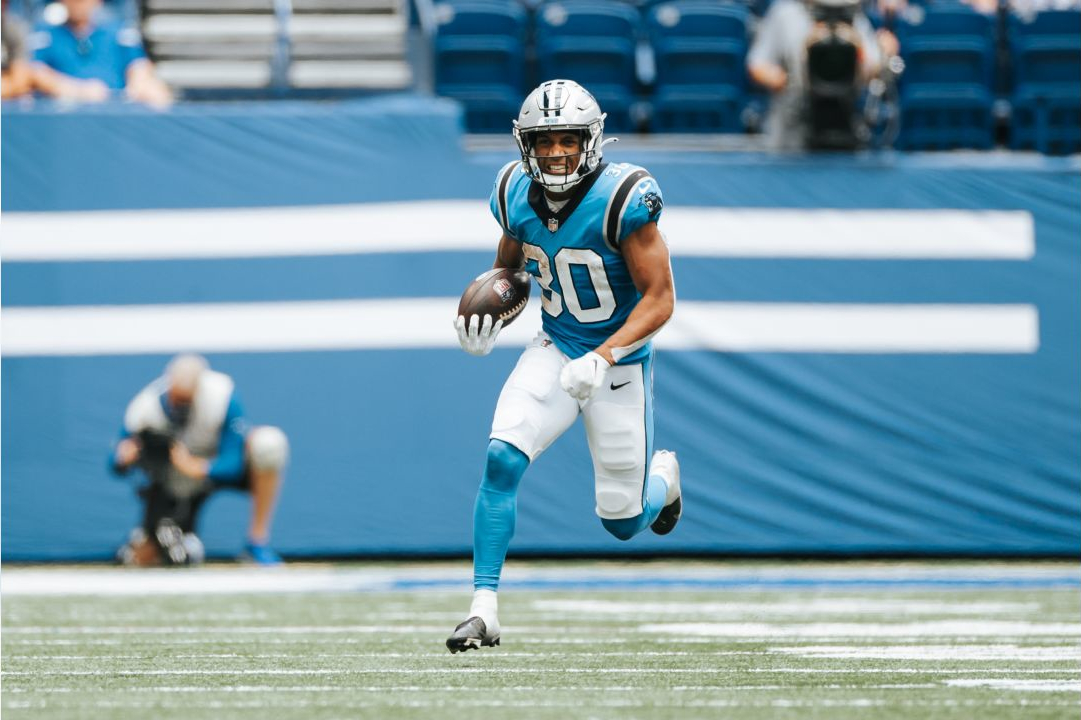 Christian McCaffrey is going to be the Panthers’ feature back for the foreseeable future, but Matt Rhule has made it clear that they want to be able to replicate what he does to a high enough level that they can rotate him off the field at times to keep him healthy and be at his best late in the season. To that end, they drafted Chuba Hubbard in the fourth-round of the 2021 draft, and he certainly made an impact with ball in hand despite some fairly inconsistent blocking.

Overall, he had seven carries for eighty yards, including a big 59-yard carry to not only move the chains but break the back of the defense on third down to set-up the Panthers’ only score of the game.

With Reggie Bonnafon and Rodney Smith both missing the game, Hubbard got an extended chance to show what he can do against the Colts and while the competition to earn the majority of running back snaps behind McCaffrey is likely to be one that continues throughout camp, Hubbard certainly helped his case with how he carried the ball on Sunday. 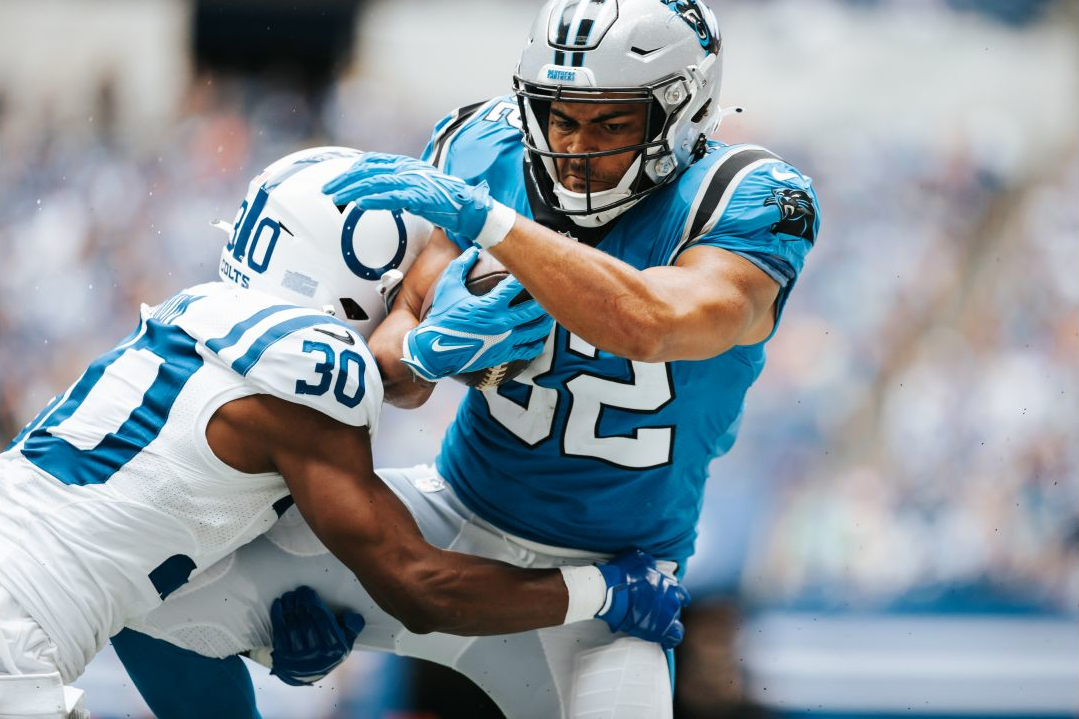 The Panthers wanted to get more production from their tight ends in 2021 after a disappointing season for the group in 2020. While neither Ian Thomas nor Dan Arnold dressed for the game, rookie third-round pick Tommy Tremble certainly showed that he can help in that improvement.

Tremble, who was almost exclusively used as a blocker at Notre Dame while struggling with drops at times, did get flagged for a holding call but also showed sure hands on a number of targets, including catching the Panthers lone score. Three catches for nineteen yards and a touchdown on four targets might not be the kind of stat line that jumps out of a box score but, given the impact the Panthers hope he can make as a versatile blocker with athleticism to work with as a receiver, it is certainly a promising early sign.

If he can continue along these lines for the rest of the preseason, then it is going to be hard to keep him off the field as a rookie. 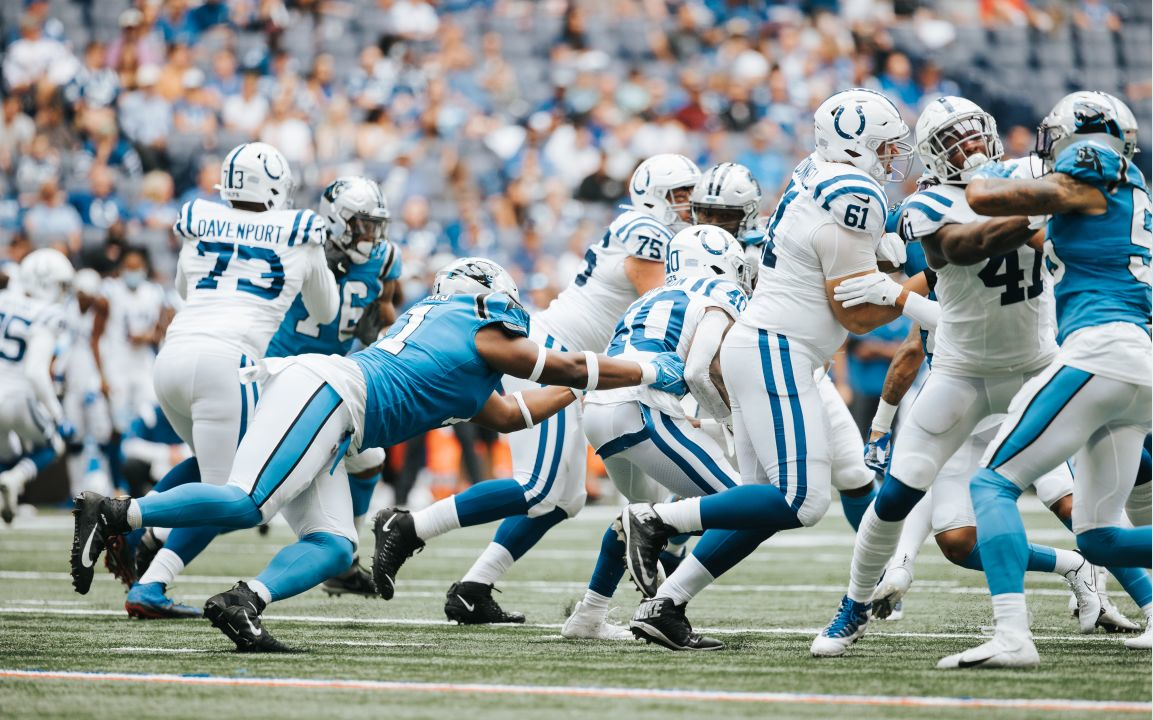 When the Panthers drafted Phil Hoskins in the seventh round of the 2021 NFL Draft, it felt like a team taking a flier on a player rather than fighting to sign him as an undrafted free agent. After all, how often do teams select a player after already having drafted a long snapper? However, if that rattled Hoskins at all then it certainly didn’t show when he took the field against the Colts.

He might not have impacted the box score, but Hoskins was consistently disruptive throughout the second half of the game, and while he was mostly working against the Colts’ third string, he not only looked like he belonged, but like he deserves to get a more extended look working with the second string as the preseason goes on.

For a player who looks to be on the fringes of the roster right now, that was exactly the kind of performance that makes the coaches take notice. 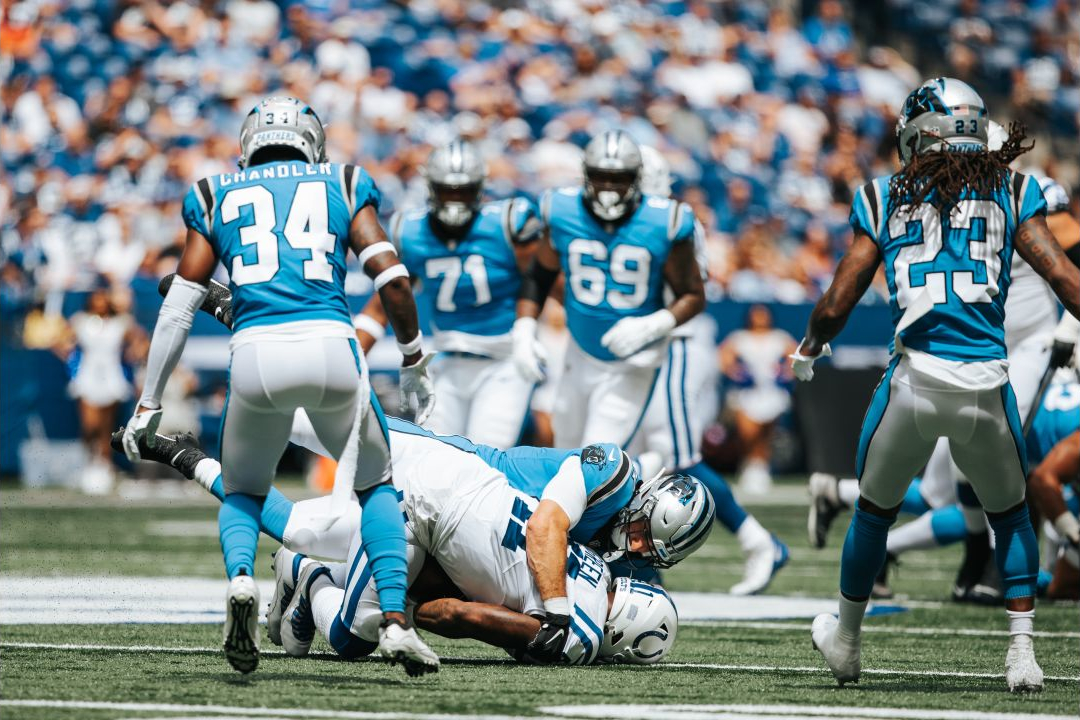 The Panthers have added a lot of new names at cornerback over the past two seasons, with the additions of Jaycee Horn, AJ Bouye, Rashaan Melvin and Keith Taylor this offseason as well as Troy Pride Jr and Stantley Thomas-Oliver a year ago, not to mention the fact that they already had Donte Jackson on the roster. Given this, there is a significant competition for places towards the bottom of the depth chart and, on Sunday, Stanley Thomas-Oliver staked a fairly good claim to one of them, especially with Bouye suspended for the first two weeks.

He wasn’t perfect, and he might not have come down with an interception but, after a rookie season where he was mostly allowed to sit and learn having converted to the position from receiver in college, he was arguably the Panthers’ most impressive corner on the day. He will need to follow this up with further impressive performances as the preseason goes on, but for a player who is very much on the roster bubble this was a good start to the preseason. 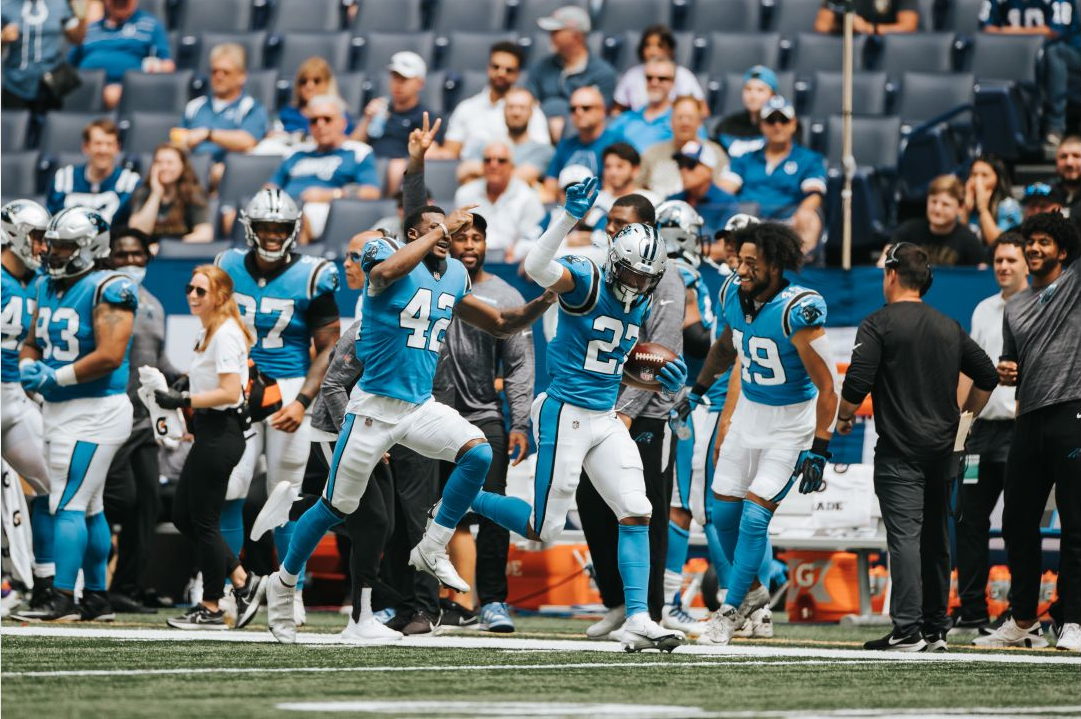 A little under a year ago, Kenny Robinson was a surprise cut as the Panthers dropped down to their initial 53-man roster and, while he was eventually promoted back to the active roster later in the season, the former fifth-round pick is another player who entered training camp very much on the fringes of the roster. While he did get flagged for an illegal hit in the first half, he also had a couple of notable plays that are indicative of the upside that caused the former XFL star to be drafted in the first place.

Matt Rhule has made it clear that he values consistency and professionalism highly in his players, and Robinson is going to need to show that he can consistently make the small plays as well as the big ones. With that said, as Josh Norman proved years ago, if you keep making plays on the ball then it’s going to be hard not to keep you around. Hopefully Robinson doesn’t take as long to turn preseason plays into regular season plays as Norman did but, like Thomas-Oliver, he is certainly off to a good start to preseason. 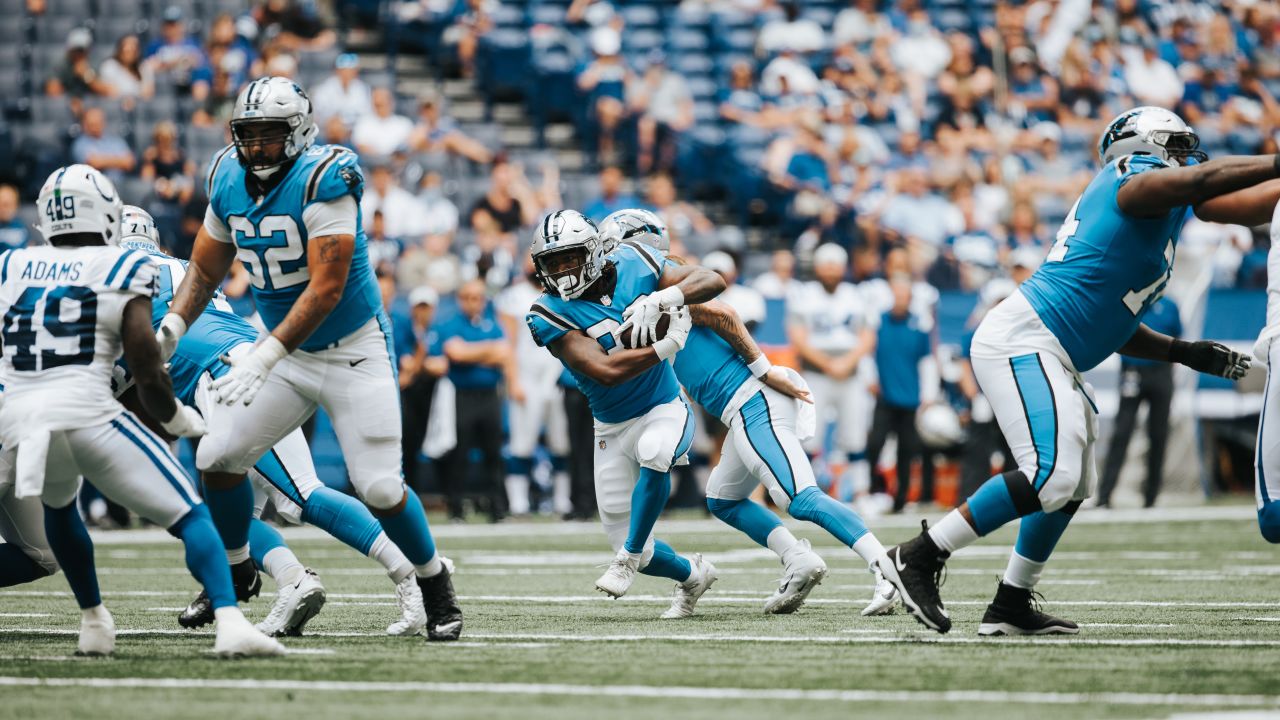 Speaking of players who are on the roster bubble…

Greg Little has never lacked talent, but the former second round pick has struggled to turn his talent into consistent play on the field. While he did put together a couple of games of encouraging play last season, his tendency for a mental error has made it hard for him to see the field and, given his lack of positional flexibility, has put his roster spot in doubt entering year three.

While he didn’t have many huge plays against the Colts, and there were arears where he can still improve, it is notable that on a day where the Panthers had a lot of issues up front, Greg Little wasn’t one of them. Most encouragingly, having been criticized heavily for his run blocking so far in his career, he made a couple of nice blocks including one to seal a defender and spring a fifteen-yard gain on third-and-ten.

Little still has a lot of work to do to make the roster, let alone see the field on offense during the season, but this was a good start for a player who is trying to turn around some narratives. 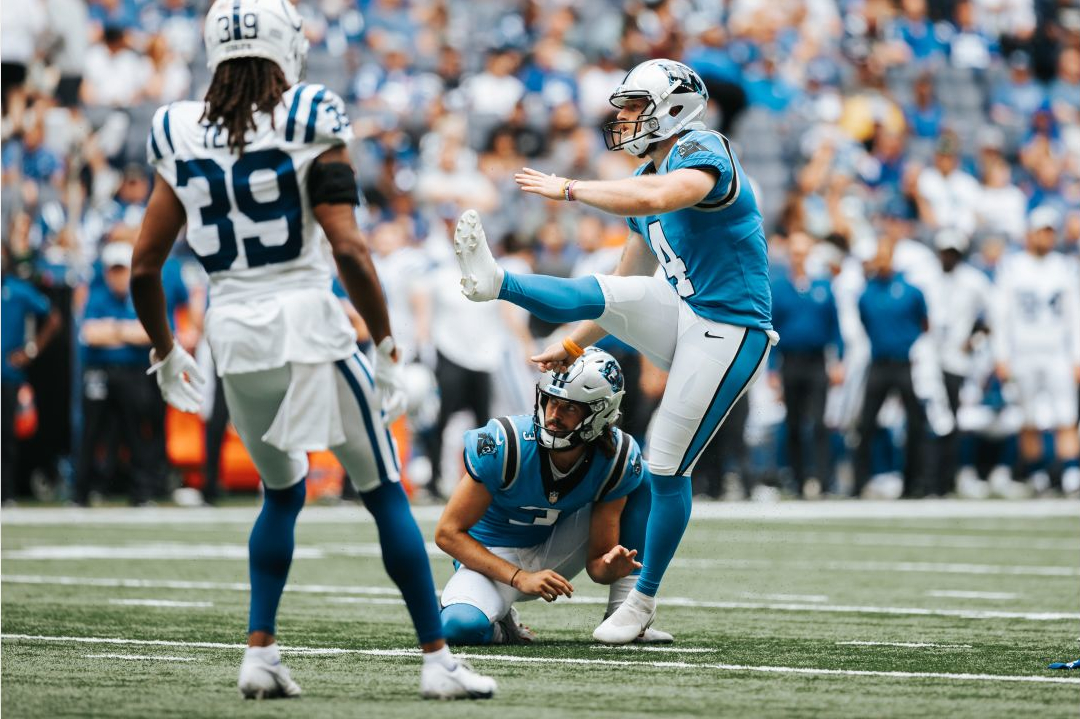 Joe Charlton didn’t have the best start to life as a Carolina Panther and attracted a fair amount of criticism after struggles during the Panthers’ preseason practices a year ago, but after putting together a highly impressive rookie season, the former South Carolina Gamecock eased any remaining fears about his potential impact on Sunday.

Charlton punted four times for 54 yards, 57 yards, 41 yards and 53 yards, with one of those being muffed and recovered by the Panthers and the other three being returned for an average of four yards-per-return. That’s really very good. 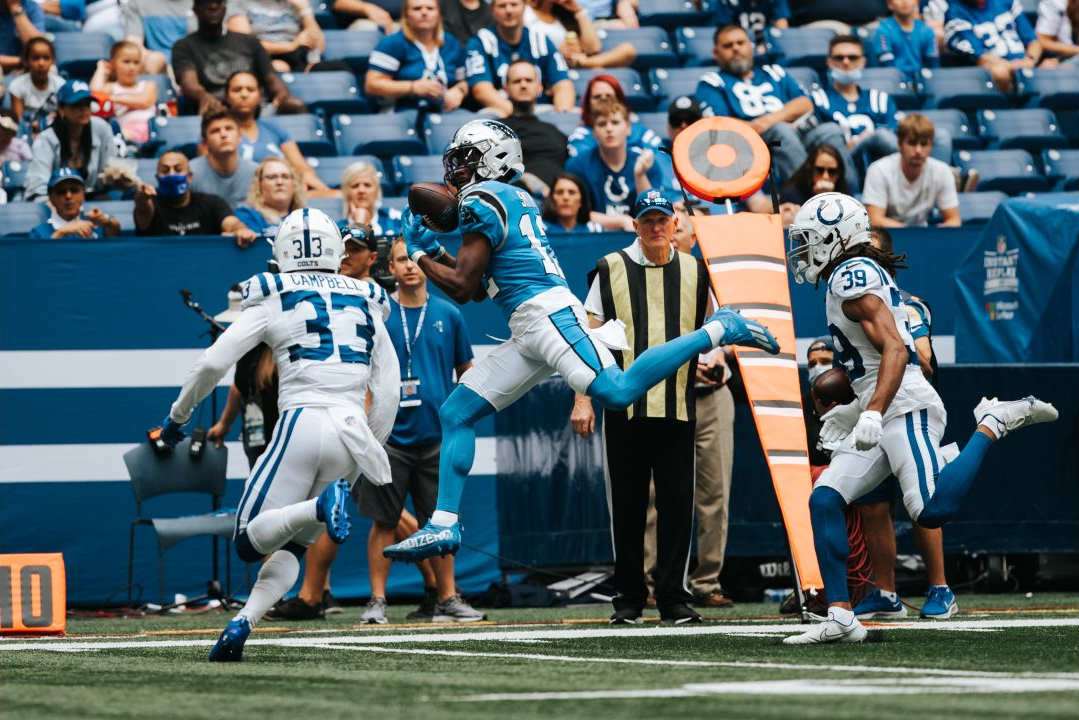 None of the Panthers’ starters played against the Colts, and with both teams likely using only a fraction of their playbooks there is not much that can be said about the Panthers’ prospects for the season based on this game, but it still served as an opportunity for a number of players (frankly more than have been highlighted in this list) to make a positive impression on both fans and coaches.

The Panthers will have to cut down to 85 players this week and will have another week of practices against a live opponent in the Ravens, but more than any of that it was just nice to have Panthers’ football back.