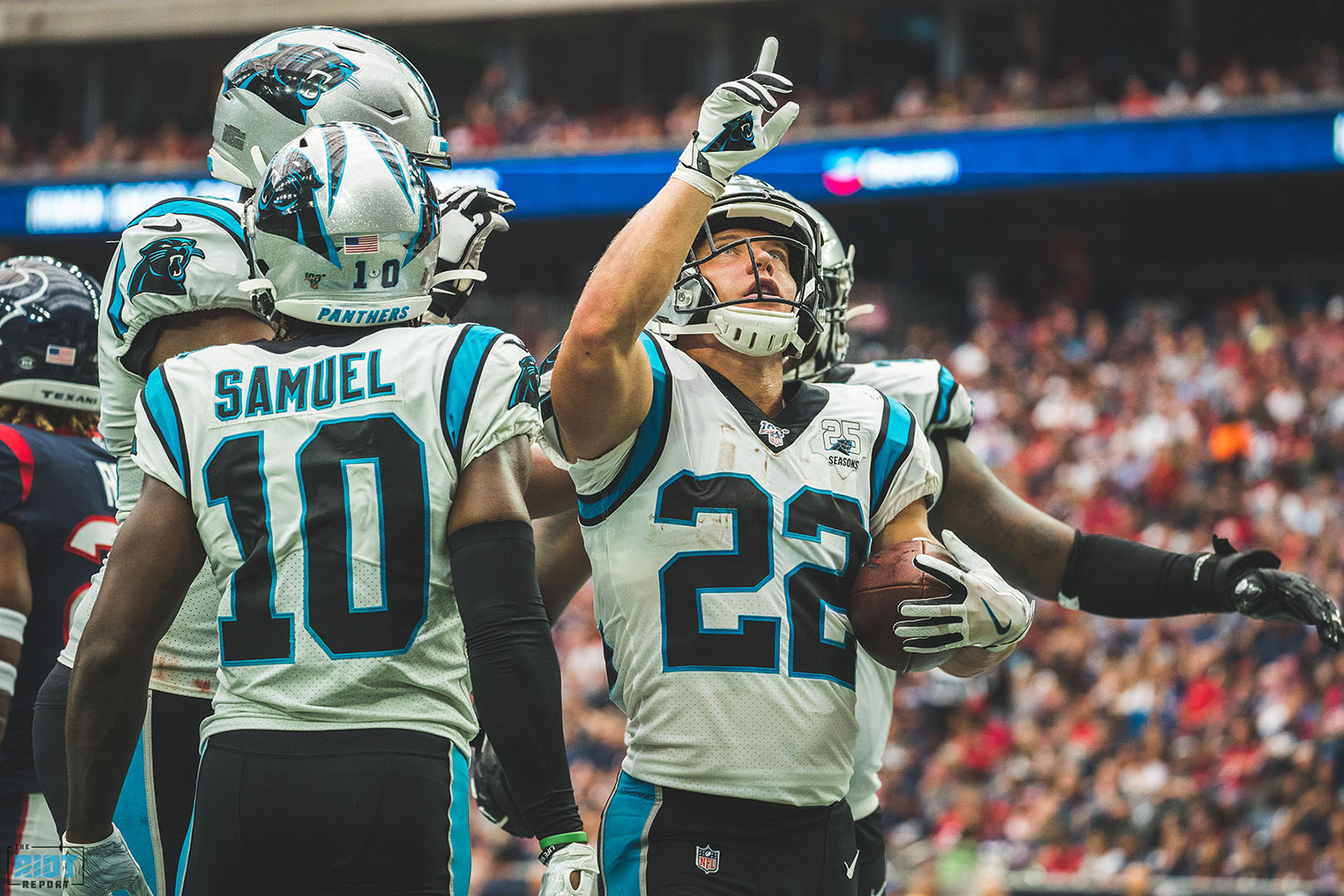 While Panthers quarterback Kyle Allen could not repeat his Week 3 success this weekend against the Houston Texans, he at least got the ball into the team’s most dynamic playmaker.

Christian McCaffrey was basically the Panthers’ entire offense in their 16-10 victory over the Texans as the running back accounted for 179 of the Panthers 297 offensive yards on the day to help the team get back to .500 after starting the season 0-2. McCaffrey recorded 93 rushing yards and a touchdown on 27 carries and led the Panthers in receptions with ten on the day with 86 receiving yards.

“It was very important that Christian had the type of day that he had,” Panthers coach Ron Rivera said after the game. “He is one of those guys [that] when he’s on the field, he gives you a chance.”

“They obviously run their offense through him and you can see why,” said Texans DE J.J. Watt. “He’s a great player.”

McCaffrey’s 37 touches (27 carries and 10 receptions) on Sunday set a new career-high for him – there’s only been 12 games with more touches by a single player in the last decade.

Throughout the game against the Texans, McCaffrey made several huge plays, including his touchdown to make the score 10-3 in the second quarter. However, there was no play more impressive than the one McCaffrey made in the latter stages of the Panthers’ win.

In the fourth quarter, with the Panthers only up by three points with 11:23 left, McCaffrey brought down a spectacular juggling catch to convert the first down on 3rd-and-7. If McCaffrey does not complete the circus catch, the Panthers would have punted, and the Texans likely would have received the ball with excellent field position along with the opportunity to tie or take the lead.

“I ran a drag and whatever you think is probably what I think,” McCaffrey smiled. “I kind of just tipped it up and made sure I could make the play. I’m glad I slid that far – I didn’t know I was going to slide that far. If that was grass, I don’t know if that would have happened.”

“So, thankfully, that was turf.”

Is there anything he can’t do?! pic.twitter.com/ZglEaR11ee

Carolina’s offensive line has a lot of joy when McCaffrey has a big day like he did against the Texans.

With Cam Newton hobbled with a foot injury, the Panthers have put more on McCaffrey’s plate – and the third-year player has delivered. In four games, McCaffrey has rushed for 411 yards and four touchdowns and leads the Panthers in receptions during the same span as McCaffrey has brought down 25 catches for 213 yards.

Allen knows the value of having a player of McCaffrey in the Panthers’ backfield – especially for an inexperienced quarterback. 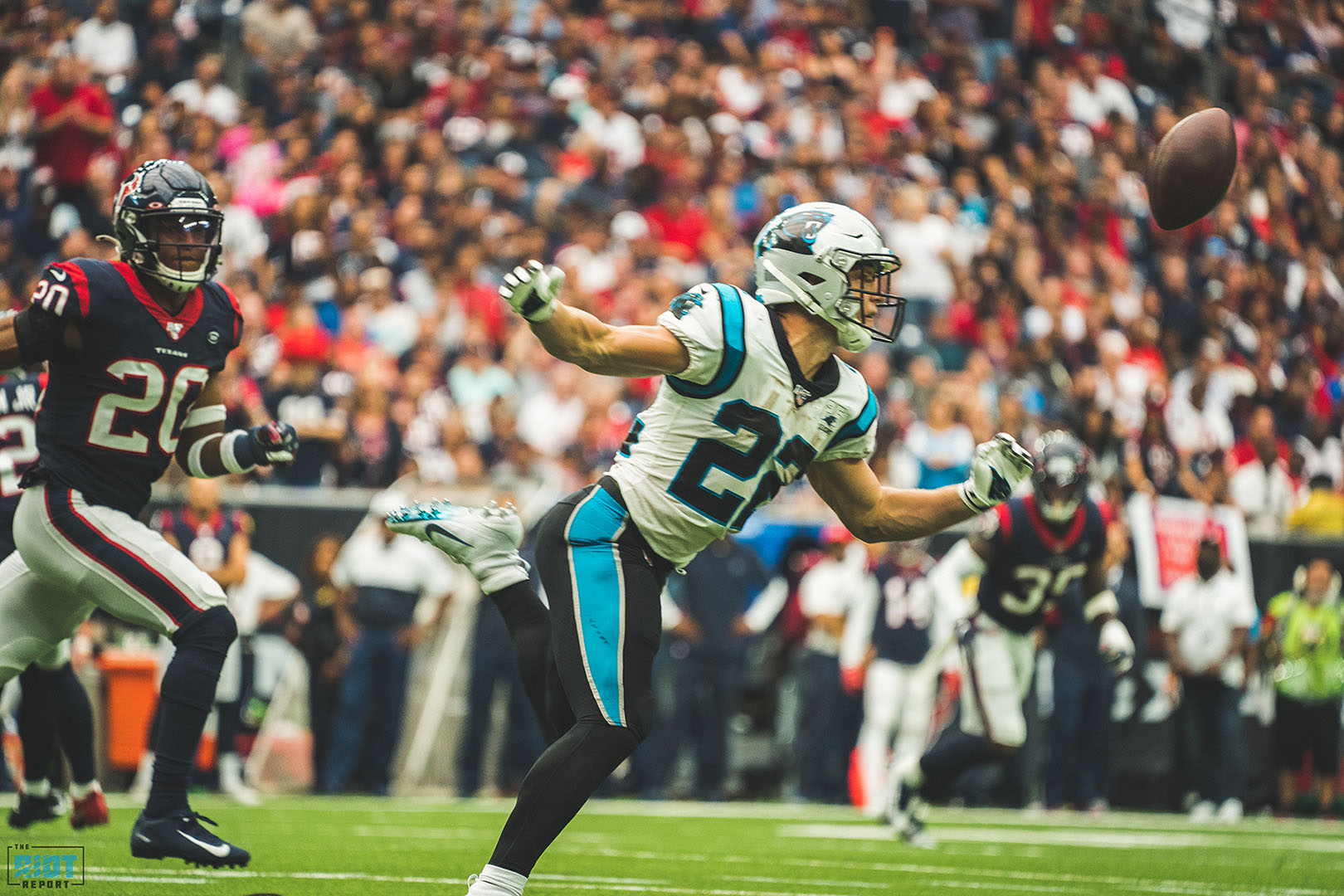 McCaffrey is averaging 186.5 scrimmage yards and a score per game through the first quarter of the season. One of McCaffrey’s goals is to be the third player in NFL history to have 1,000 yards rushing and receiving in the same season. Only Roger Craig in 1985 and Marshall Faulk in 1999 have only achieved the feat.

Currently, McCaffrey is on pace to rush for 1,611 yards, but the current pace of 852 receiving yards would leave him just short of the mark. However, with 12 weeks still left in the season, there’s no reason to believe the goal is out of reach, especially if McCaffrey can have a few 100-yard receiving games over the next dozen games.

Another reason McCaffrey could achieve his goal is he is rarely taken off the field. Week 3 was the first time McCaffrey did not play all of the Panthers offensive snaps this season – and that was only because the Panthers had a three score lead late in the fourth quarter.

With Newton’s return date unclear, McCaffrey will need to continue to be the engine for the Panthers offensively, especially after their slow start to the season. As Sunday showed, Allen came a bit down to Earth after his four-touchdown performance against the Cardinals in Week 3.

While Allen threw for 232 yards against the Texans, he also turned the ball over three times. 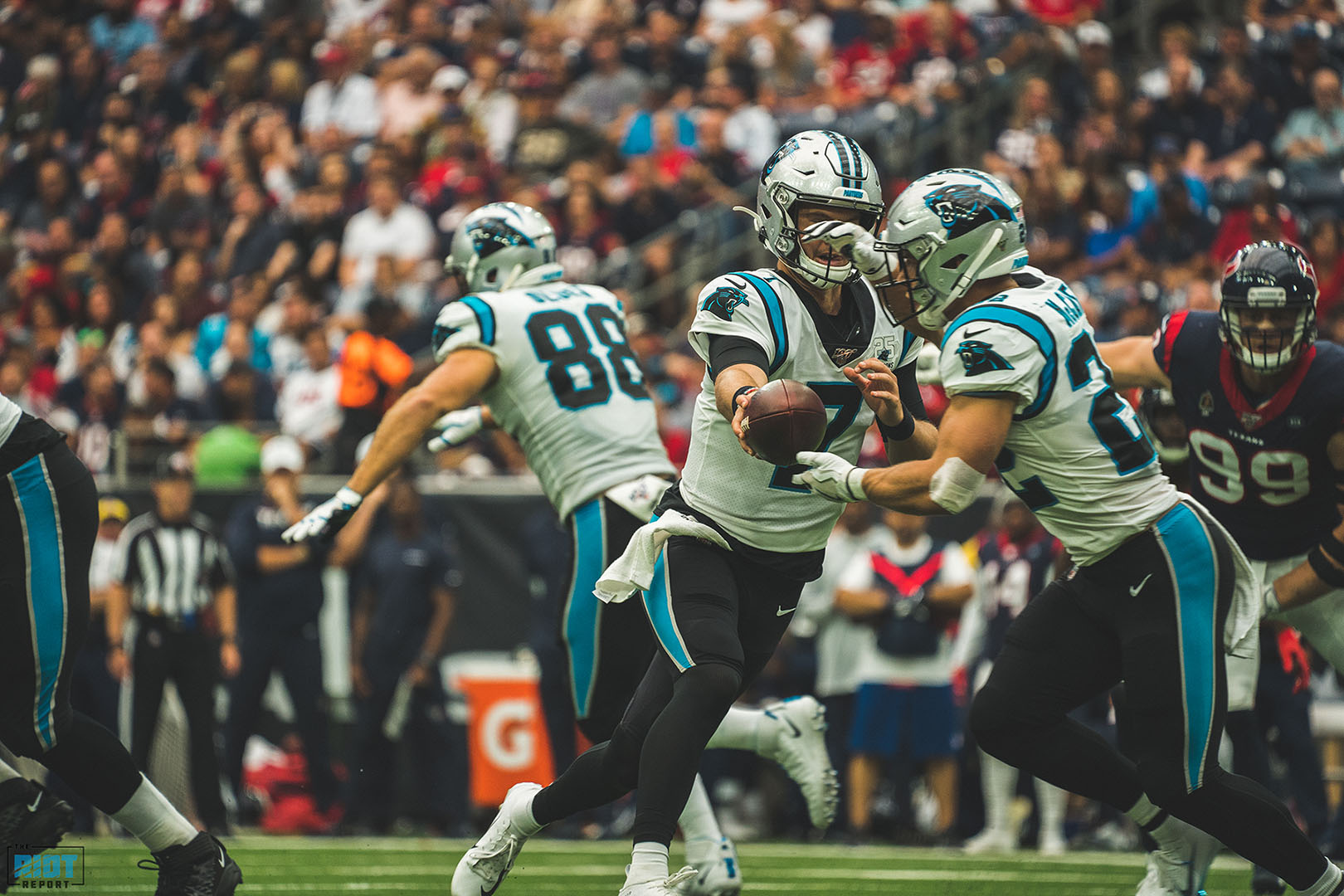 The Panthers offense continues to find its way with Allen at the helm – expect the team to continue to use McCaffrey in a variety of different ways. Even after the injury to Newton, the Panthers continued to believe they would hold it together and turn it around – their running back is a significant reason why.

“Even after the two losses, we felt that way,” McCaffrey said. “There’s never been a time when we haven’t been confident and I that’s something where noise – you can’t let it get to you – because you’re going to hear a lot of people that are clapping for you when you’re doing well and those are the same people who are down on you when you’re losing. So the most important thing is this locker room and how we handle the wins, how we handle the losses.”