Panthers Step Up Pressure To Get Their First Win 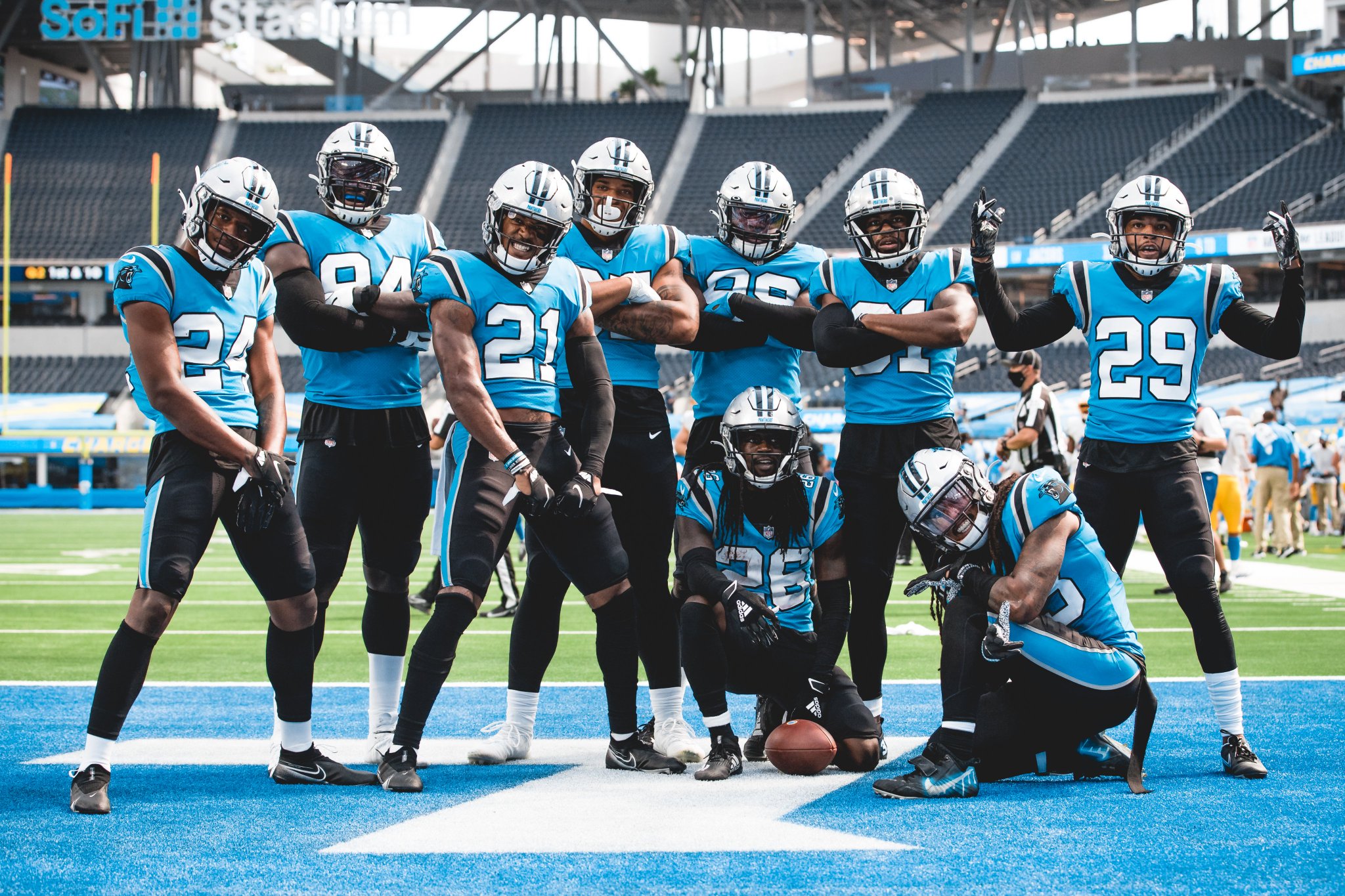 Entering Sunday’s game against the Los Angeles Chargers, the Carolina Panthers were riding a 10-game losing streak dating back to last November – their last win came 329 days ago, with a different coach, a different quarterback and in a different time. Only a week after turning the ball over four times against the Tampa Bay Buccaneers, the Panthers flipped the script on the Chargers, forcing four turnovers of their own to get Matt Rhule the first win of his coaching career.

Carolina defeated the Chargers 21-16 behind four turnovers and five Joey Slye field goals – not only was the return of Thieves Ave. present on Sunday, but so was the Panthers pass rush, something that was nonexistent during their first two games of the season.

Carolina didn’t record a sack in their losses against the Las Vegas Raiders and Tampa Bay and allowed 65 points during their first two games – they were a completely different unit on Sunday.

After the game, Rhule said he thought the Panthers pass rush was the difference in the victory.

“I think a lot of things that happened last week happened because [Tom] Brady gets the ball out so quickly,” Rhule said after the game. “And I thought we saw a great quarterback in Justin Herbert….I thought we were able to get on edges and our guys took the challenges seriously. We are getting better. It’s Week 3, we are figuring out exactly who we are. I thought guys took that to heart. We [ran] some more pressures. We put a little bit more each week.”

“It wasn’t perfect, but I thought the pressure allowed us to be in the game.”

One of the best players on the Panthers defense on Sunday was defensive end Brian Burns. He was able to get a strip-sack on Herbert during the Chargers’ second possession which led to a Slye field goal to extend the Panthers’ early lead to 6-0. He also generated a ton of pressure throughout the game, which helped contribute to the Chargers being held to only one score in the first half

Last season, Burns, like so many Panthers, had to go through that eight-game losing streak to end the year and was frustrated after the Panthers lost their first two games of the 2020 season.

After the game, Burns says the Panthers made an emphasis to put pressure on Herbert, who was starting in his second career game – but when it comes to the turnover, Burns passed the accolades along to his teammate.

“Guys came to rush – that’s how I see it,” Burns said. “Guys knew we had a rookie quarterback. He did a good job, but when you have a rookie quarterback, you gotta get in his space and affect him. So going into this week, the preparation was to get after the quarterback. My mindset on that strip-sack was run. Shaq Thompson yelled behind me, ‘pass, pass,’ and I pinned my back, and I went. I give all credit to him.”

“I just think we blitzed better,” said Rhule. “We’re getting more comfortable, we’re showing a little bit more….we’ll have to just continue to build off that because there’s a lot of really good quarterbacks in this league and if you don’t get pressure, you have no chance. The pressure that we got this past game was the reason why we had a chance to win.”

What also helped was quarterback Teddy Bridgewater having an efficient game – he completed 22 of 28 passes for 235 yards and a touchdown for his first win with the Panthers. That was a massive difference from a week ago, when Bridgewater turned the ball over three times against the Buccaneers.

One negative the Panthers will still need to fix was the lack of touchdowns in the red zone. Carolina made six trips to the red zone against the Chargers only to come away with one touchdown and five field goals on the day.

“We have to have that mindset that everything happens faster,” Teddy Bridgewater explained. “That’s running routes, me making decisions, me being able to run the ball down there also. We just have to put more of an emphasis on it.”

Carolina played its first game without Christian McCaffrey, who will miss at least three weeks due to a high ankle sprain. Backup Mike Davis was able to be a significant contributor in McCaffrey’s stead. Davis finished with 46 yards on 13 carries, but was more of a factor in the passing game as he caught eight passes for the second consecutive week, this week for 45 yards and the Panthers only touchdown.

Davis says a win like this will help with the Panthers create the culture they’re trying to have in Carolina under Rhule.

“The first two games, we felt like we weren’t really playing as we should,” Davis said. “And this week in practice, we wanted to make sure to be physical and basically just play for each other. That’s all it was, and we went out there and executed. I felt like we left some stuff out on the field, but at the end of the day, we got the win.”

Sunday was bittersweet for Davis because on Sept. 25, 2019, he lost his father to cancer.

I know my dad is proud pic.twitter.com/SmmsRlOeaY

Davis says he was thinking about his father when he scored his first touchdown since 2018.

“It’s crazy to me, my dad was like my biggest fan. And I know he wanted to see me play and go out there and do my thing. With me wearing 28, I know he would have loved to see it. And me being close to him, it kind of hurt a little bit because I know he would want to be at every game.”

Rhule says he was happy to get the win for the players who had to go through that long losing streak.

“I’m just so happy for the guys,” said Rhule. “For some of these guys, it’s been 10 straight losses. I really don’t carry that around with me, it has been two. I see where we are headed. But when you’re a young guy and that’s all that you hear, it starts to weigh on you. I thought today was the best example we had of playing as a team.”