Panthers Stock Up – Stock Down Following Win vs Jets 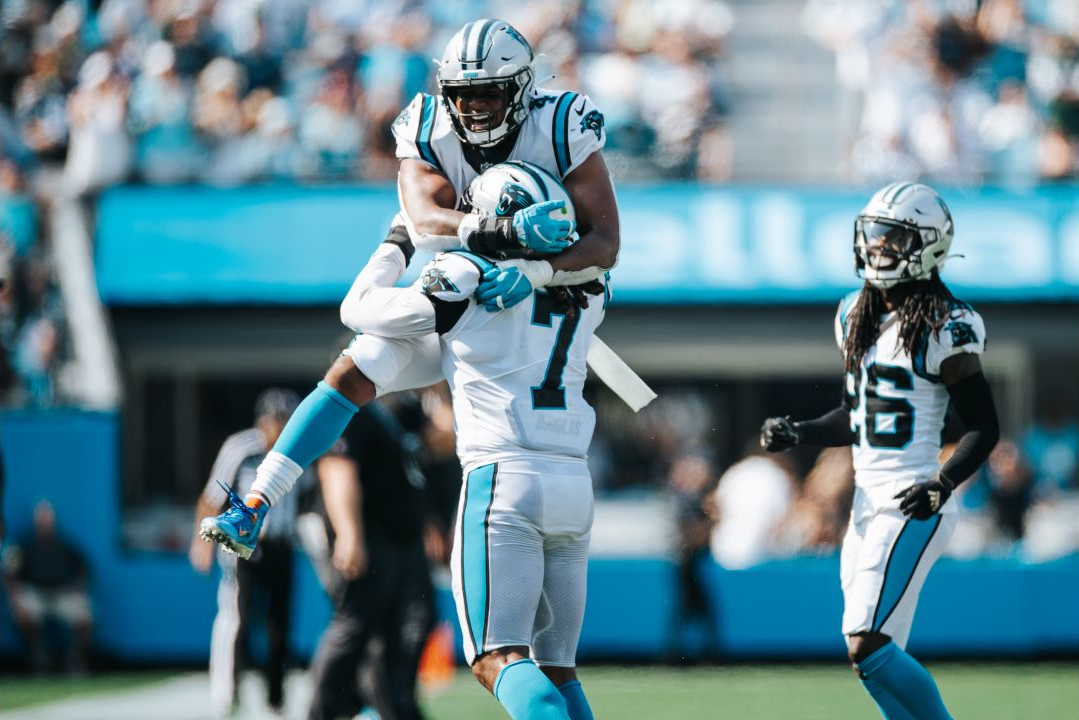 The Panthers certainly made things harder than they had to be against the Jets, as a game that should have been beyond reach by the third quarter was allowed to be decided by just five points. With that being said, the reason why the game should have been out of reach by the third quarter was that the Panthers did a lot of good things on Sunday, albeit against a Jets team that isn’t expected to win a lot of games in 2021.

So, who made a significant positive impression for the Panthers in their season opener, and who left something to be desired? 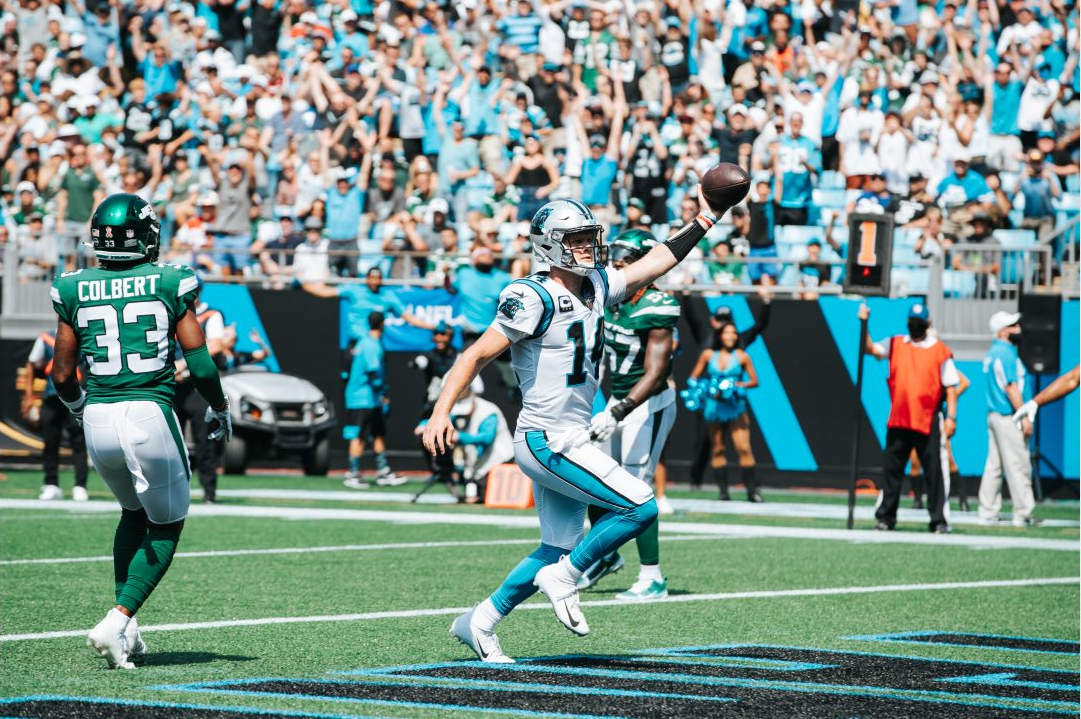 No, Sam Darnold didn’t look like the second coming of Patrick Mahomes on Sunday, but what he did look like was a functional NFL quarterback. He completed nearly 70% of his passes for 279 yards and a score, while also adding another touchdown on the ground, highlighted by the long 57-yard touchdown pass to Robby Anderson.

Despite facing fairly consistent pressure from a strong Jets’ front, Darnold was able to consistently get the ball out quickly and, crucially, avoided anything close to a back-breaking error with his lone turnover being largely the fault of the fullback. He might not have consistently been hitting tight windows 30 yards down field, but it was a solid performance given the context.

When the Panthers traded for Darnold back before the draft the range of potential outcomes ranged from ‘crash and burn’ all the way to career recovery. It’s too early to say that Darnold has figured things out in Carolina, but the early returns are reassuring. 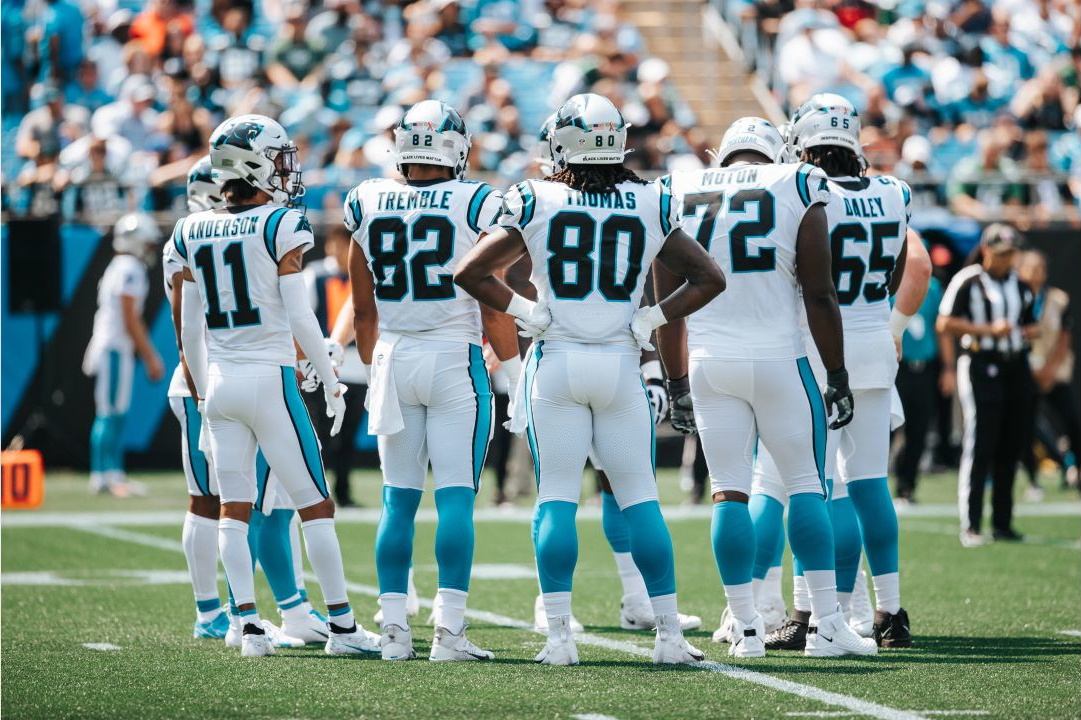 One of the big things the Panthers focused on this offseason was adding young, talented players at the skill positions to take some pressure off the likes of Christian McCaffrey, DJ Moore and Robby Anderson. If the game against the Jets was any indication, that plan hasn’t exactly panned out just yet.

Second-round pick Terrace Marshall, third-round pick Tommy Tremble and fourth-round pick Chuba Hubbard combined for five receptions for 30 yards on eight targets, while key free agent addition Dan Arnold managed just two receptions for six yards on three targets. The Panthers aren’t expected all of these four (plus Shi Smith when he returns from injury) to be star producers, but it can’t be down to the Panthers’ big three to carry all the offensive load.

On the positive side, this was the first NFL game for three of these players and offensive touches are always going to vary from week to week, but if the Panthers can’t get consistent production from secondary offensive contributors, then they are going to find it hard to move the ball against offenses who are better-equipped to take away one or two key players with personnel matchups and double coverages. 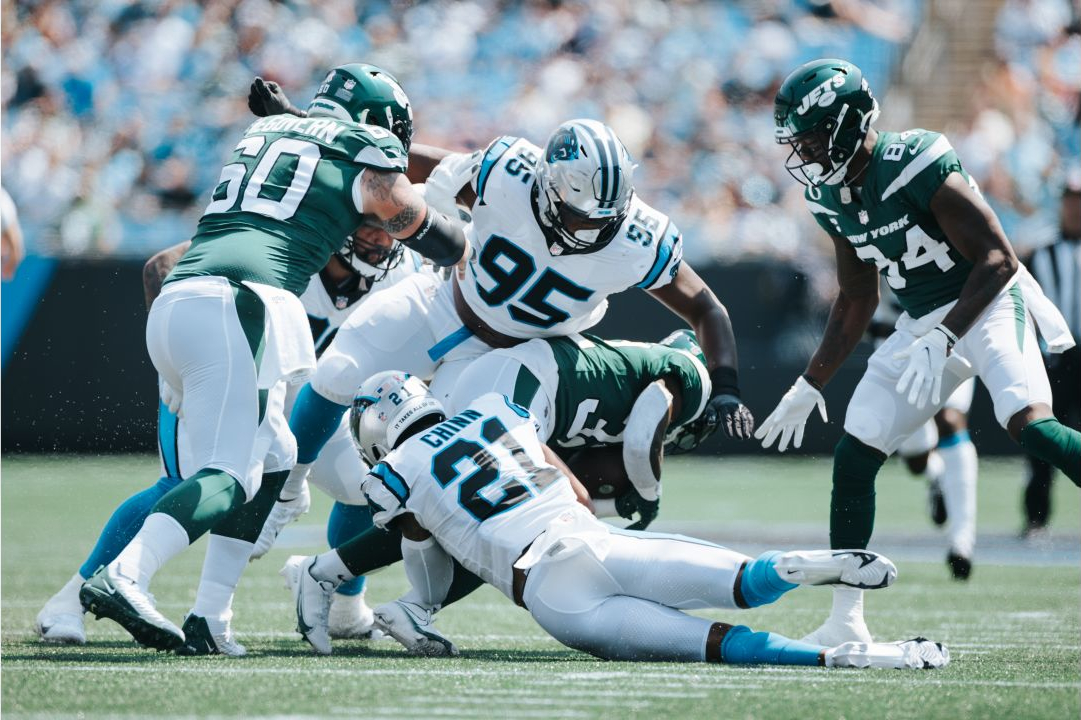 Yes, the Panthers did allow two scoring drives later in the game, and if the offense isn’t able to sustain drives more consistently as the season goes on then late-game defensive fades might become a more consistent issue, but for the most part the Panthers’ defense took the step that they have been talking about for the past few months.

The Panthers notched an impressive six sacks (with six different players recording at least half a sack), six TFLs, ten QB hits, eight passes defended and an interception. They would possibly have hoped to turn this pressure into more turnovers, but those will come in greater numbers if they are consistently able to frustrate teams and force quarterbacks into rushed decisions. They also did a much better job against the run than they have done over the last two seasons, holding the Jets to just 45 rushing yards at 2.6 yards-per-carry.

Unquestionably, they will face tougher challenges this season than a Jets team with a rookie quarterback and a dubious offensive line, but after a 2020 season in which the defense was mostly focused on minimizing the damage this retooled 2021 group certainly appears to be a quite different beast indeed. 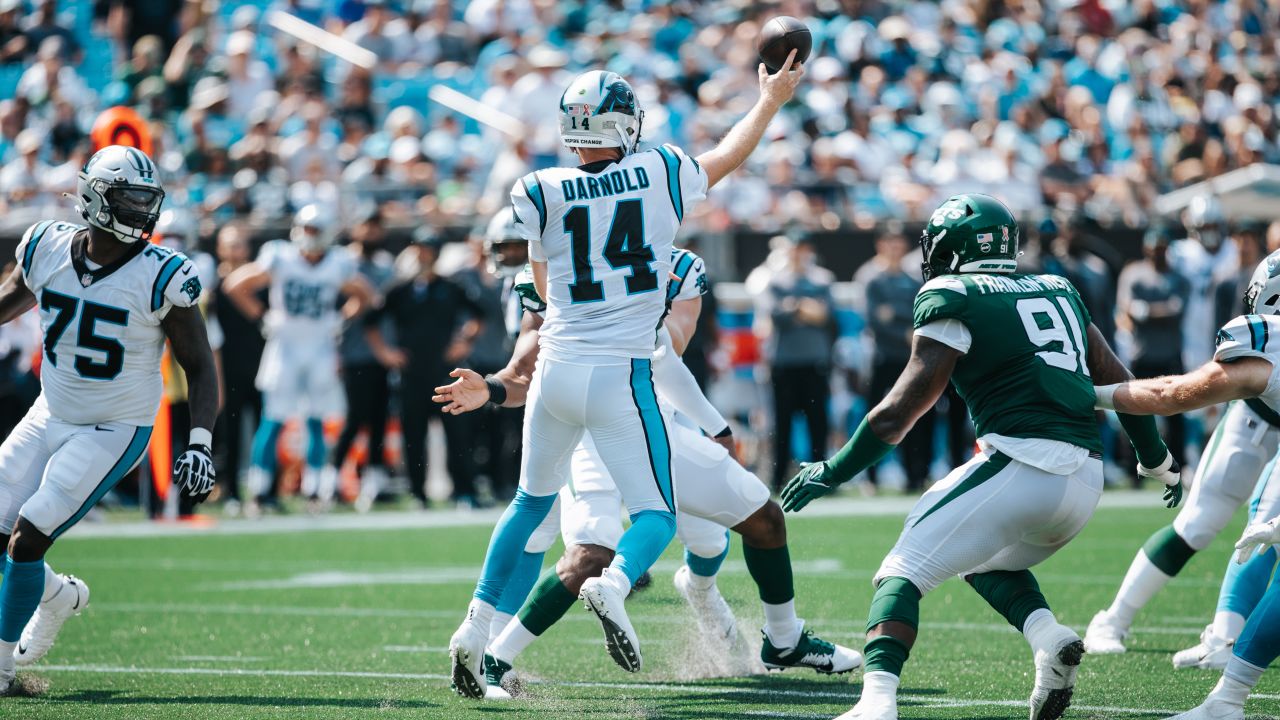 Scoring 19 points against a rebuilding Jets team isn’t impressive on the face of it, and once again they struggled in the redzone, going one for four, and had issues sustaining drives. The Panthers had two drives of ten plays or more, which netted a combined three points. Half of their drives ended with a punt after five or fewer plays. Most frustratingly, these aren’t new problems, they are the same ones that haunted them all last season and, if the first game of the season is any indication, they haven’t gone away.

Joe Brady has down some encouraging things as an offensive play caller in Carolina, and the offense that the Panthers ran against the Jets on Sunday wasn’t all bad, but it’s hard to look at the performance and talent of the individual players and not expect the results to be better. It isn’t time to panic yet, but things need to improve soon. 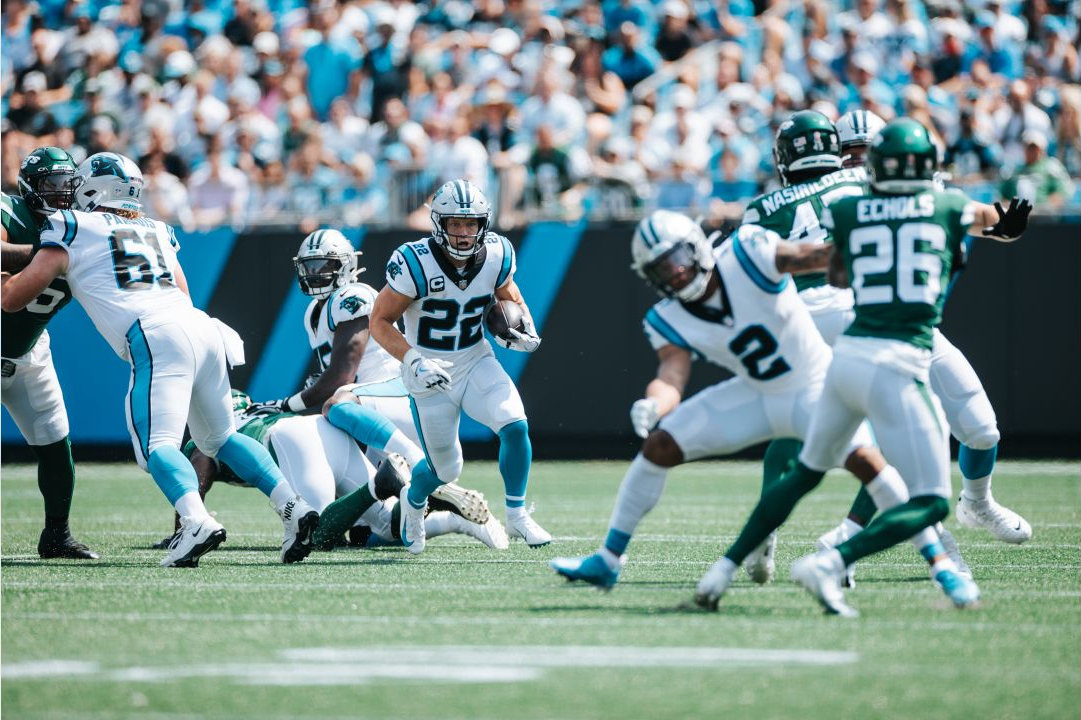 It’s hard to argue that McCaffrey’s stock wasn’t already very, very high indeed, but having missed most of last season to injury and with talk of his role being reduced, it was hard not to be impressed by quite how significant an impact McCaffrey made on Sunday.

Rushing for 98 yards at 4.7 yards-per-carry while catching all nine of his targets for 89 yards might not stand-out in the context of his remarkable productivity in Carolina, but it is worth remembering quite how extraordinary that kind of product is.

If he was able to sustain this pace of the whole season, he would be the first player to record not a 1,000-1,000 season, but rather a 1,500-1,500 season, with nearly 3200 scrimmage yards at over six yards-per-touch. That would be enough to break the NFL single-season scrimmage yardage mark by over 20%. It would be enough to place him in the top 45 all-time for both single-season rushing and receiving.

More than any of the statistical context, however, McCaffrey is simply remarkable to watch. The consistency with which he gains more yardage than ever appears to be possible on plays is astounding. Plays that look like they’re going to go for a yard suddenly end up picking up six as he contorts his body through gaps for extra yardage.

It might not lead to a winning season for the Panthers in 2021, but it’s worth noting just how generationally excellent his is while you get the chance. 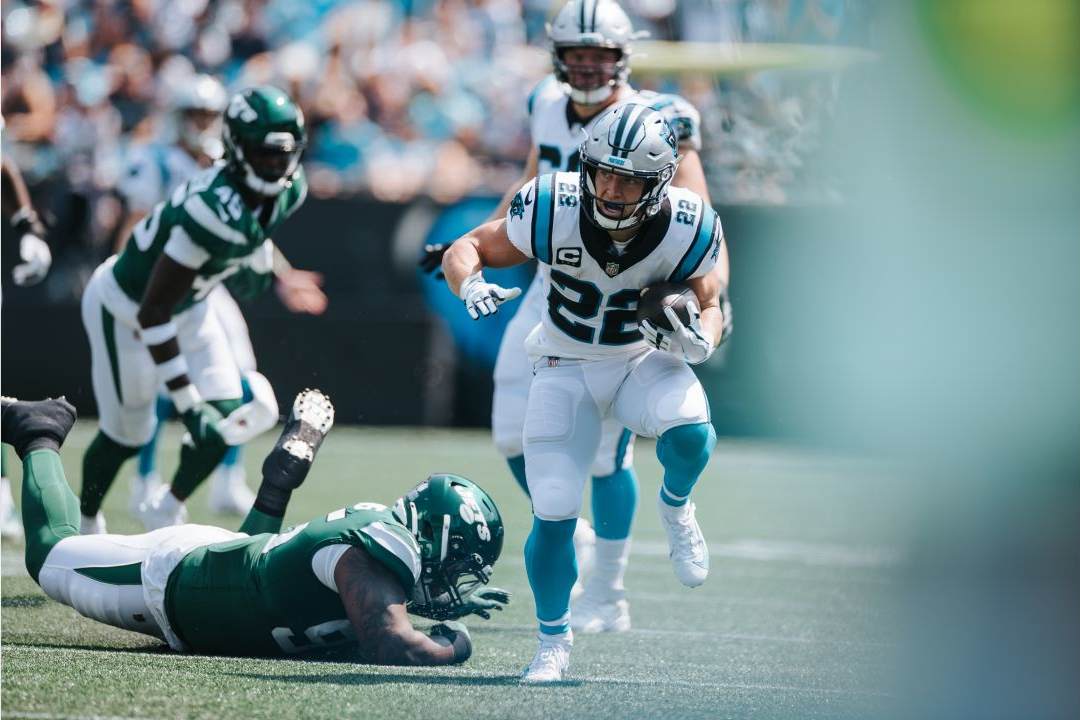 The Panthers will definitely face tougher opponents this season than the Jets, and a five-point home win against a team that is coming off a 2-14 season might not sound that impressive, but there were a lot of impressive performances on both sides of the ball for the Panthers.

If they are able to address some of the areas of concern, in particular the consistently of the offense and its dependence on a few key players, then they have a chance to make this win the start of something bigger. Something that will start on Sunday as they host a Saints team that is coming off a 3-38 win against the Packers.