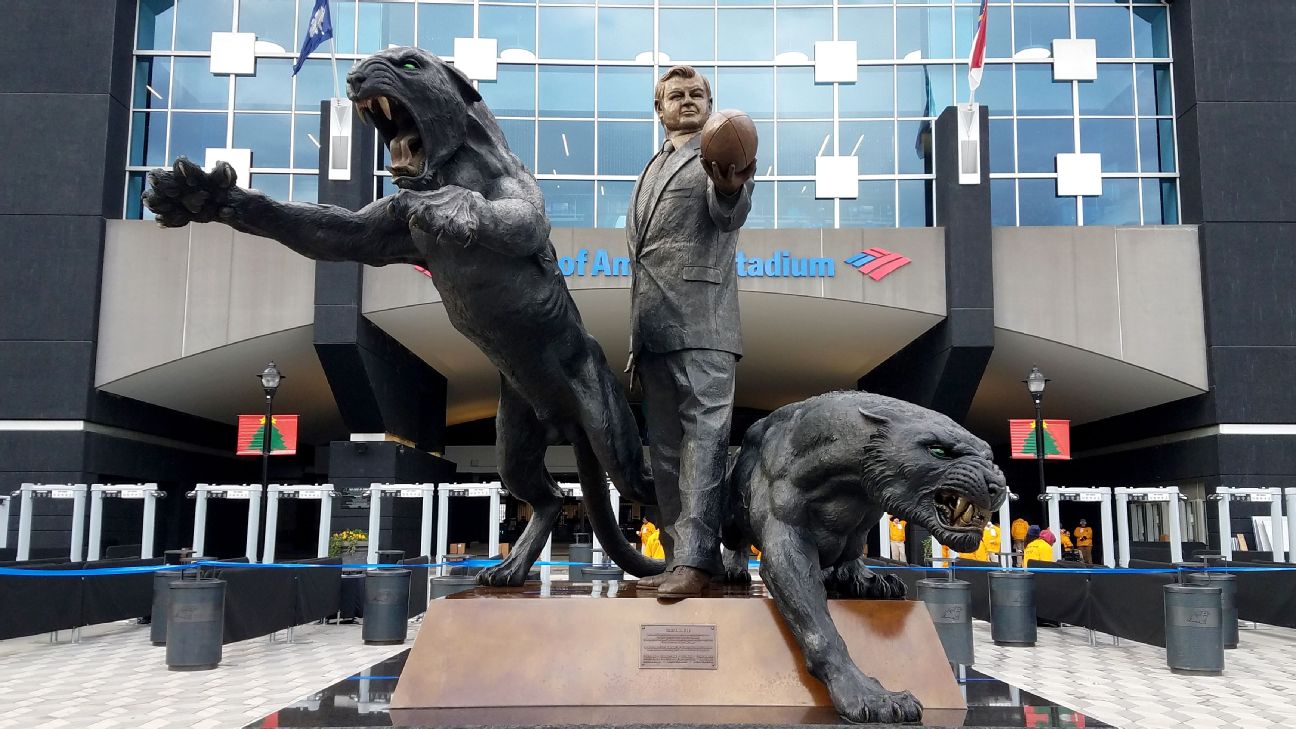 On a balmy Wednesday afternoon in Charlotte, a big reminder of the painful past of the Carolina Panthers has been removed as the team took down the controversial 13-foot statue of Panthers founder and former owner Jerry Richardson for apparent safety reasons Wednesday afternoon.

Here’s the current scene outside of the stadium as the Jerry Richardson statue is set to come down pic.twitter.com/80v8YXmhUd

The Panthers released the following statement on the removal of the statue.

“We were aware of the most recent conversation surrounding the Jerry Richardson statue and are concerned there may be attempts to take it down. We are moving the statue in the interest of public safety.”

Through his spokesman Jim Gray, Richardson declined to answer questions about the status of the statue.

“Mr. Richardson has made no public comments about the Panthers or the NFL since the sale of the team and doesn’t plan to do so now as a private citizen. He has worked to treat all people fairly in his business and personal lives and, like many other Americans, is troubled by recent events in Minneapolis, Charlotte, and around the country.”

The city of Charlotte shut down Graham Street for a flatbed to remove the statue, which had been the subject of speculation this past week on social media involving the daily and nightly protests in the city of Charlotte. There was some thought that protestors may pull down the statue, which weighs about 4,500 pounds – according to a statement issued on social media, the Panthers will cite these ‘public safety concerns’ as the reason for the removal of the statue.

The sculpture, called “The Tribute” features a 13-foot tall image of the former Panthers owner, who sold the team amidst accusations of both racial and sexual misconduct which were later substantiated by the NFL, flanked by two snarling Panthers. It was given to Richardson on his 80th birthday in 2016 by his partners – the sculpture was crafted by Todd Andrews, the same California artist who crafted the six Panthers that sit outside the other three gates of the stadium.

The removal of the Richardson statue and the panthers that flank him may also create an easier entrance and exit to Bank of America Stadium should the team need enhanced entrance protocols during the 2020 season.

Richardson sold the club to David Tepper in 2018 – Tepper said at his introductory press conference that he was “contractually obligated” to leave the statue exactly where it stood. Further reports have indicated that the statue must remain in front of wherever the Panthers play in perpetuity, including if the team moves from Bank of America Stadium – but a safety concern would be more than enough reason to remove the statue. There have been no reports on whether this is a permanent or temporary removal.

Bank of America Stadium sits on 34 acres of city-owned land, which the Panthers lease for $1/year.

Earlier this week on a podcast with NFL Network’s Ian Rapoport, Panthers safety Tre Boston discussed how he and his teammates were restricted by Richardson from protesting during the national anthem. During a conference call with reporters on Wednesday afternoon, Boston provided more details on Richardson and how the Panthers advised players not to protest before games.

“It just trickled from the top down,” Boston said. “It ended up being, ‘people come to watch football, they don’t come to watch protests.’ That’s what was told and we were just advised to don’t do it. But times are different and we really appreciate that – I wasn’t part of the group that [the Panthers] have now with the social justice last year. But to see even that part of what Tepper is about, those guys make an effect in the community. We didn’t have that group back then. So that’s what we fought for and that’s how we make a difference and that’s how owners can help their players – when he’s matching us and putting up donations with the guys towards foundations guys want it to go to.”

“Again, it means a lot to have a guy like that behind you.” 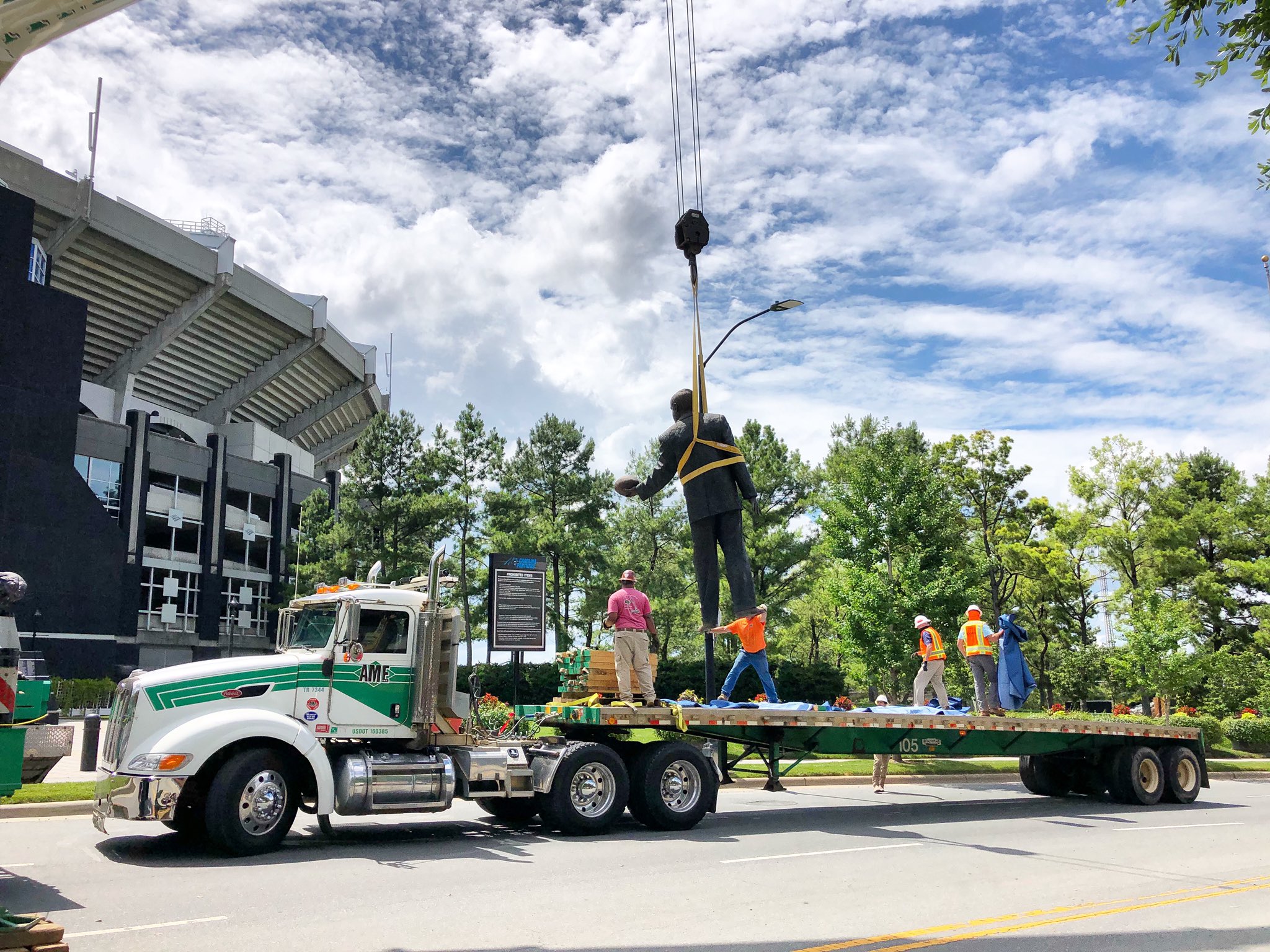 During his first tenure with the Panthers, Boston says he didn’t have much of a relationship with Richardson. But after returning to the franchise last season, things are completely different with Tepper as the team’s owner.

“He is seen around a lot more, guys are able to talk to him a lot more,” Boston said about Tepper. “Besides that, for me, I think having a guy like that around the building that is accessible, that puts himself out there to talk to his players, he has called me multiple times, we’ve had multiple conversations and I appreciate that. Because when I’m calling, I don’t feel like I’m talking to the owner, I feel like I’m talking to my friend.”

“I feel like I’m talking to somebody that I can trust and we’ve built that over the years. Again, I can’t say that I came to Carolina just so opened arm with everything they’re telling me because I’ve been told things before that. But to see him put the effort into it, to call me, to us build that relationship last year that leads to this, I think that’s cool because guys are going to see that and that accounts for wins down the board.”

It is unknown if the removal of the statue is permanent or if the Panthers would put it back in its location at the north gate or even move it to another location. Boston personally believes with all that’s going on in the country, it’s best that the Richardson statue is removed – or even replaced by a statue of a franchise legend like Luke Kuechly or Steve Smith.

“I think as individuals, we all want to be respected and be loved in our workplaces,” Boston said. “We want to be heard and understood where we are coming from, especially when we are trying to articulate it and trying to have these dialogues talks. So I think for myself, if we are saying the Carolina Panthers are the standard, it is only right that we do things like this because we hold ourselves so high.”

“How we are with our community, even the players with how involved we are with the community and our fans. Just being embedded with what we stand for, it is only right we continue to be that way. It’s nothing we’ve changed, it is just somebody that’s doing it the right way that I appreciate. With me coming back, it was long talks about stuff like this happening and it is amazing to feel that you have the support to be able to talk.”