Panthers’ Thomas Fletcher Explains The Art Of The Long Snap 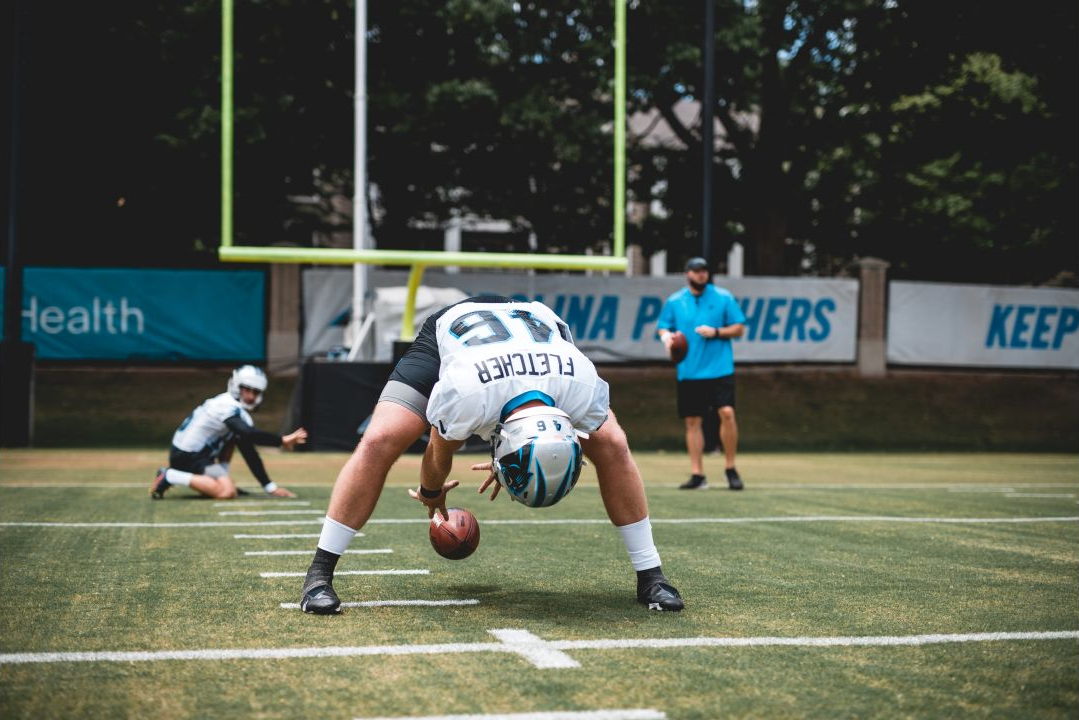 Generally speaking, when most fans think about a long snapper it’s because something like this has just happened:

Which means that for the past decade and a bit, Panthers fans have hardly thought about long snappers at all, as in JJ Jansen the Panthers have had arguably the most consistent long snapper in football. However, with the selection of former Alabama long snapper Thomas Fletcher with their third and final sixth round selection in the 2021 NFL Draft, the Panthers look to be preparing for the eventuality that the 35-year-old Jansen, who signed a one year extension this offseason, might not be with the team much longer.

Speaking to the media during rookie minicamp a little over a week ago, Matt Rhule explained a little about what he and the rest of the coaching staff are going to be looking for when it comes to deciding between the two, “for a long snapper you look at their accuracy, their time, their blocking, their anchor and then their professionalism in meetings and their ability to lean, all those things.”

While that offers a brief summary of what goes into being a good long snapper, we spoke to Thomas Fletcher to find out a little bit more detail about what goes into a good snap, how the NFL game differs from the college scheme and how he is approaching his competition with JJ Jansen. 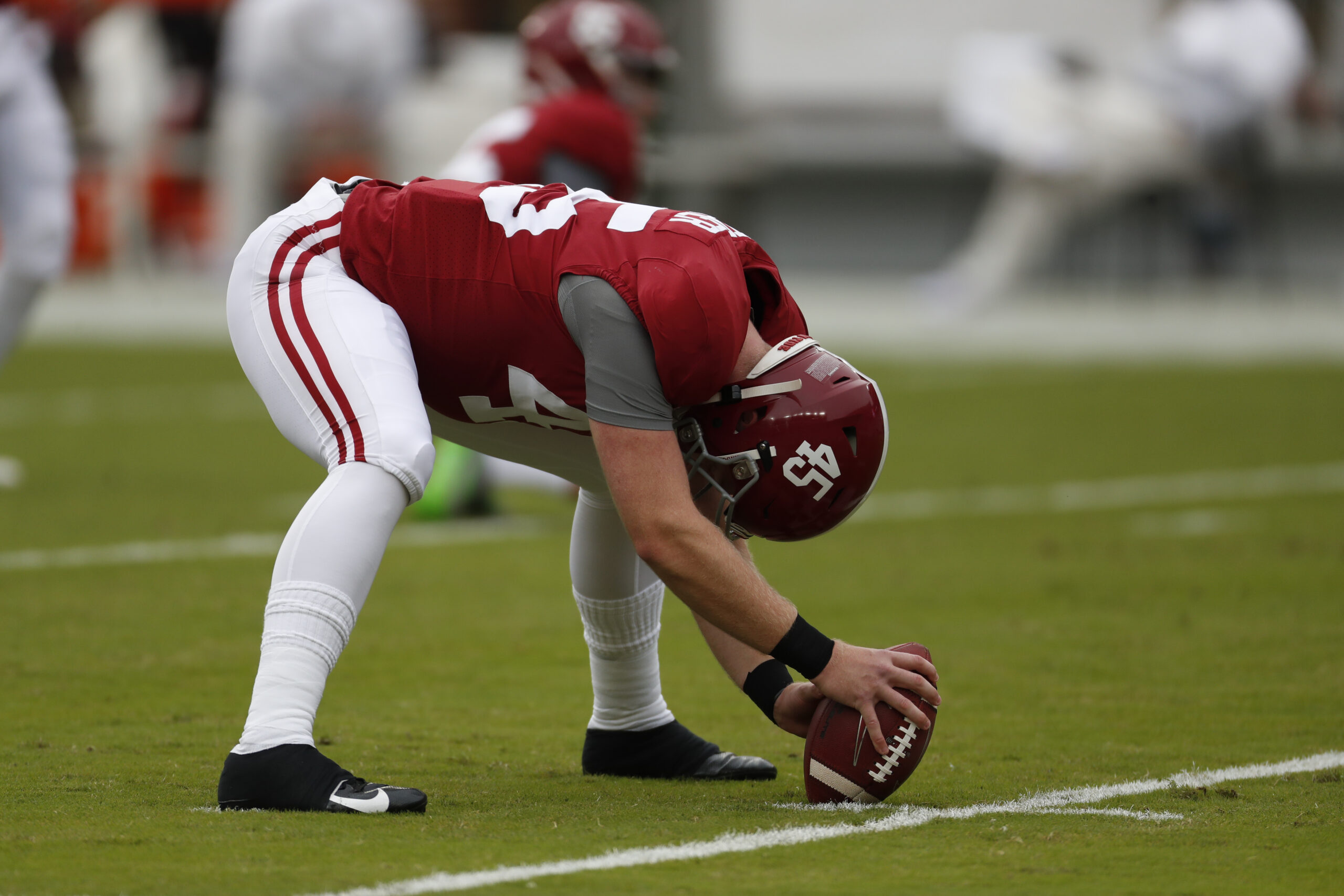 Let’s start with what makes a good long snapper.

“The long snapper’s job is about making it as easy as possible on the punter and on the holder” explained Fletcher, “With the holder, you are responsible for putting the ball over the spot where he’s going to be able to just catch it and put it down on the ground, and you’re equally as responsible for making sure that the laces on the football are facing straight forward when he catches it.”

This goes back to the elementary understanding of what a good snap is, namely one that gets to the right place with as much consistency as possible, but with the added level of difficulty of wanting to locate the laces at the right point in space. But how on earth do you control where the laces are when they reach the holder while snapping a ball several yards away?

If done well, it should look something like this:

If you’ve ever tried flipping a water bottle up while trying to get it to land on its base you will be aware of just how hard it is to judge rotational velocity. Now try doing it while throwing the bottle seven yards and you might have a sense of just how difficult it is to snap a ball accurately for a field goal attempt. While there is unquestionable a certain amount of natural talent that goes into being able to do this, a lot of it comes down to an awful lot of hard work.

In short, if you’re aiming to be an NFL long snapper one day, you should probably start practicing now. 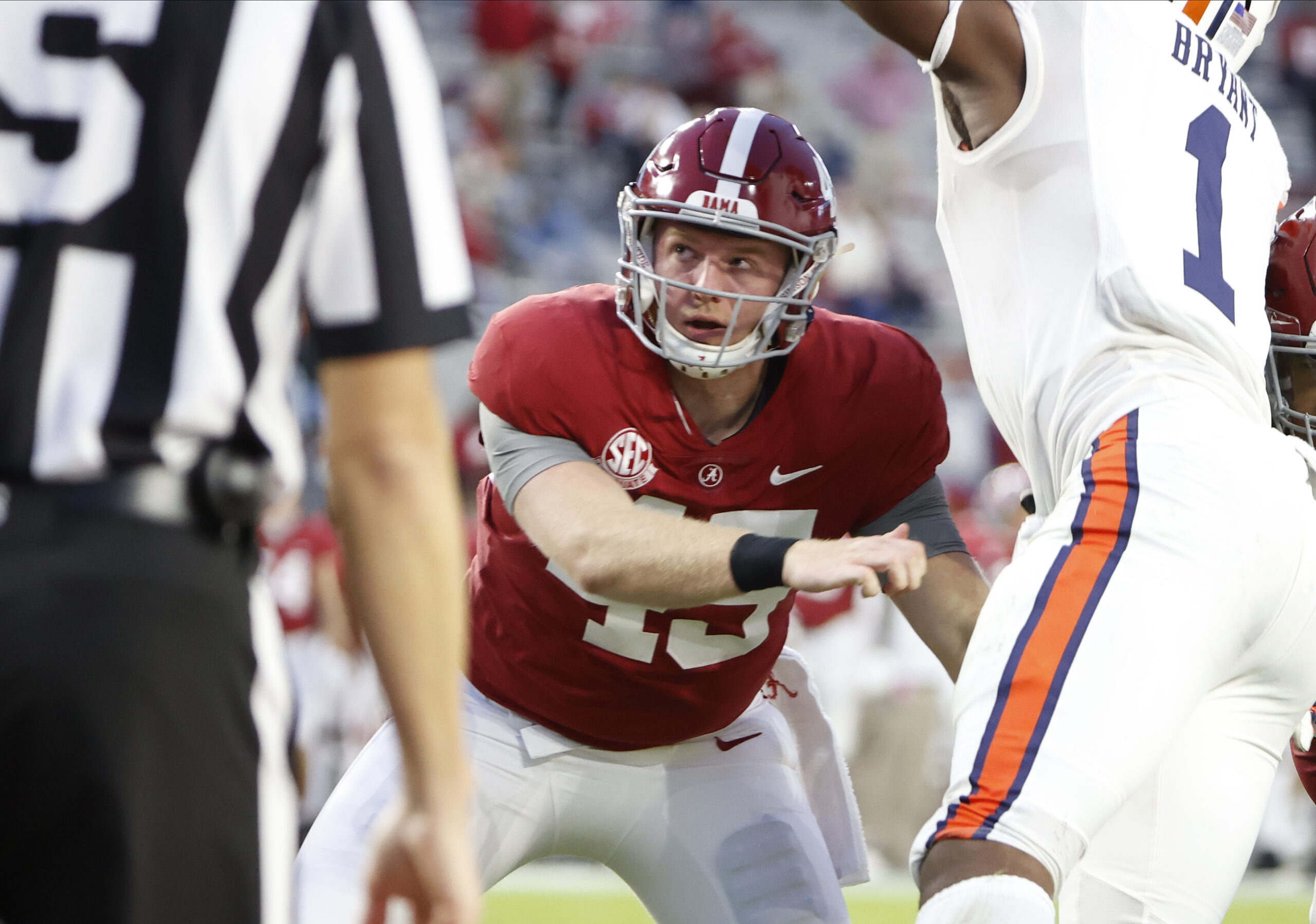 Of course, snapping for kicks is only half of the long snapper’s job, so what about the other half?

“With a punter, you want to put the ball on his right hip to where he’s going to be able to catch it, and hold it where it is because he’s going to drop the ball from his right hip” Fletcher explained, “So you want to give him as little to think about as possible in terms of punting Regardless of if he’s offset to one side or another, you have to correct to the punter in the way that he lines up and put that ball in a place where it’s going to give him the best chance to be successful in what he does.”

However, there is more to being a long snapper on punt plays as Fletcher went on to explain, “You’ve got to deliver a strike at 15 yards to the punter and that’s your first and foremost assignment and then it’s on you to protect the punter and keep guys away from him. They call it a specialized position for a reason.”

This is an area where things are very different in the NFL for most college long snappers, though Fletcher is clear that the experience at Alabama (where they ran a more pro-style punt scheme during his freshman season before transitioning to a more standard college punt scheme) as well as the coaching expertise in Carolina, puts him in the best position possible to make this transition:

“I definitely had a relatively solid foundation from being at Alabama, because we coached a lot of a lot of the things that we did and pro punt, very, very similar to the way that it’s coached here, in terms of your blocking steps, your technique, snapping and getting up off the ball. If you’ve run that type of punt, that pocket punt formation and had to do everything that that entails, I was certainly provided with a good foundation of it, but it’s definitely a transition getting back to it and I’ve been incredibly blessed to be around Coach Blackburn and Coach Foley, and guys that are very, very good at coaching it.” 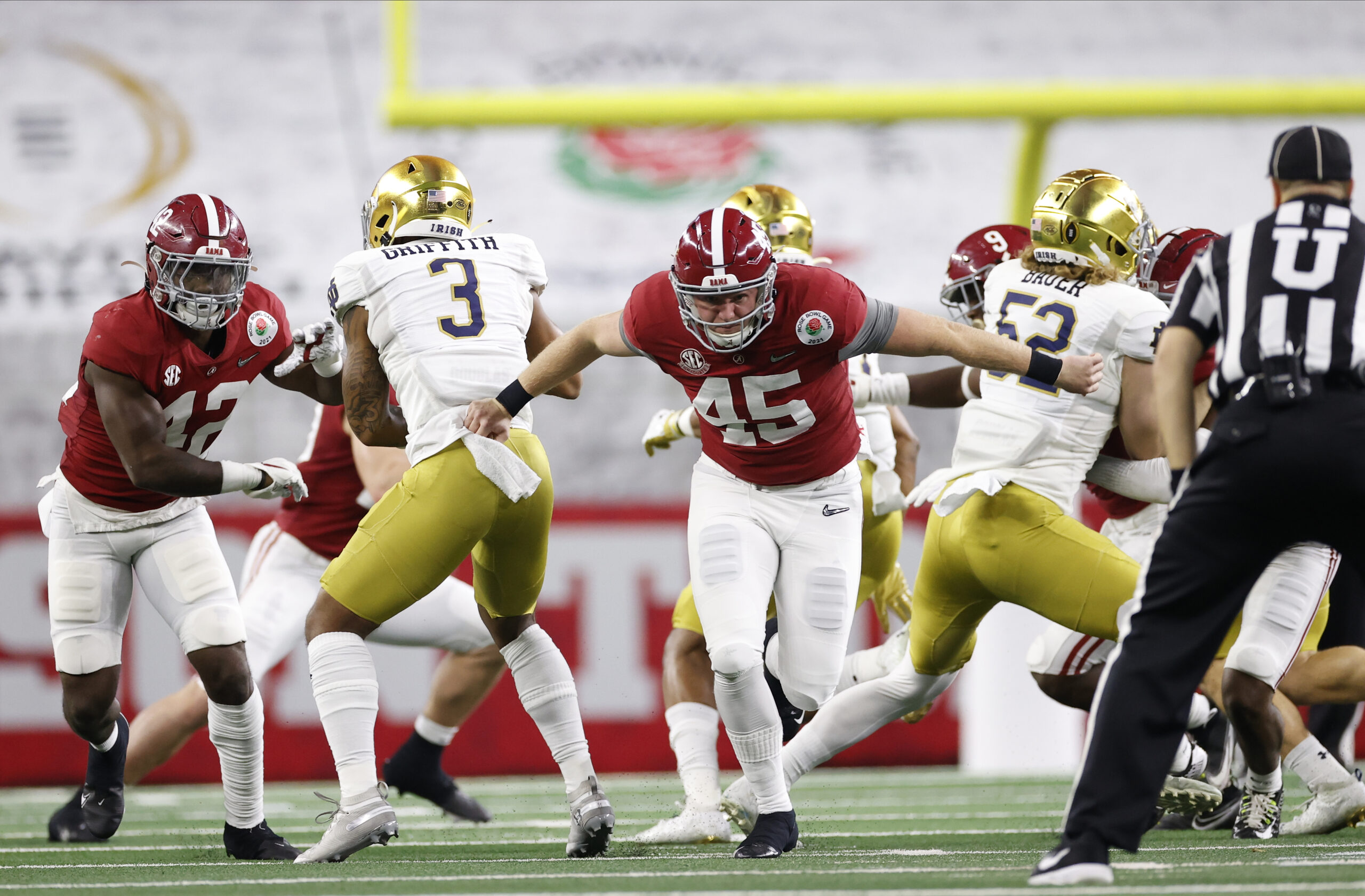 Having talked a bit about this transition, it is worth taking a moment to detail what the differences are between what Fletcher was asked to do for most of his college career (and what most college long snappers do) and what NFL teams ask their long snappers to do as part of the punt scheme. To start with, here’s an example of what Fletcher was asked to do in college:

Now here’s a punt that the Panthers ran this past season against Washington:

We’ll leave Fletcher to explain what the major difference here is.

“Instead of just snapping and releasing downfield, you’ve got to snap, get back, get in front of your guy block them and then get out in coverage and so the rules and everything in the NFL are, in a lot of ways, pretty significantly different than they are in college.”

What the long snapper is actually asked to do here is maybe a little clearer when looking at the play from the alternate angle:

After snapping the ball, rather than being able to run to chase the punt as Fletcher was able to do in the earlier play, Jansen is actually tasked with blocking an NFL lineman for a couple of seconds to allow Joe Charlton to get the punt off, then he has to run down the field to chase the punt. While nobody is going to confuse Jansen with an offensive lineman any time soon, the core skill sets are really very similar, with the long snapper looking to get inside hand placement and using their feet to close off the angle to the ball.

As Fletcher said, “They call it a specialized position for a reason.” 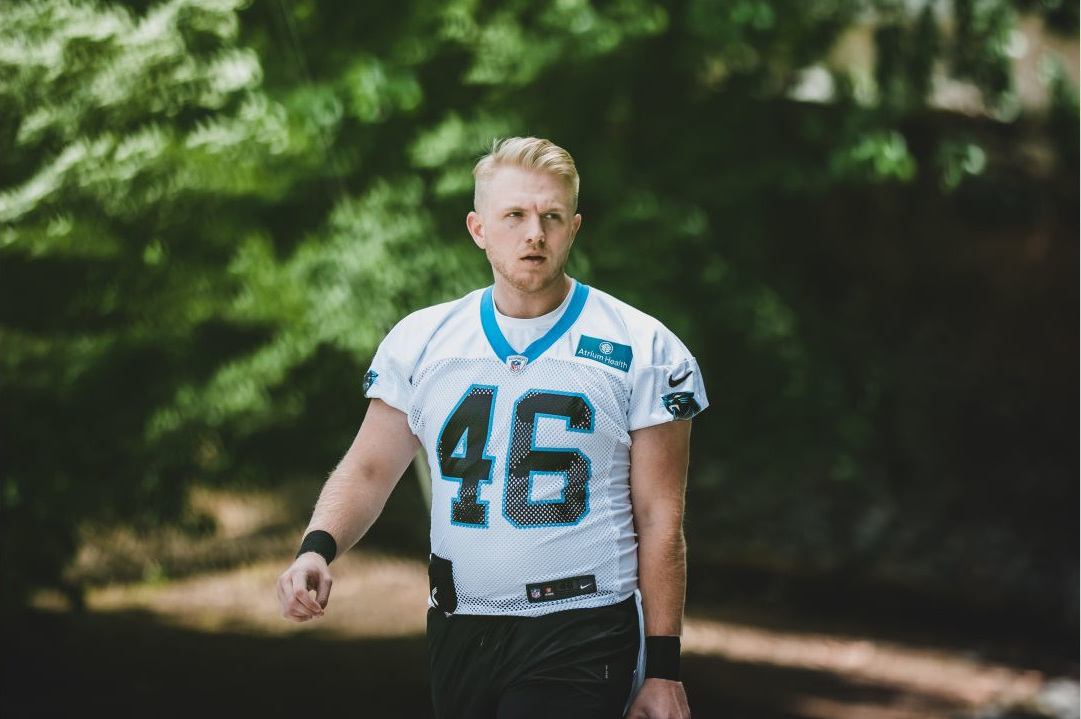 Of course, there is still a lot of space between Thomas Fletcher and a spot on the Panthers’ 53-man roster for the 2021 season, with a positional battle between him and the aforementioned Jansen hard to call at this early stage. While Fletcher is aware that he will need to beat-out Jansen for a spot on the roster, he explained how he views the chance to learn from one of the NFL’s best long-snappers of the last ten-plus years as a great opportunity.

“I’m at practice with JJ Jansen, a guy who has just played football for a long time. So I get to pick up things, both from the coaches and from JJ in how they do things and how they’ve done things for as long as they’ve done them” he explained, “We’ve been around each other in practice the past couple days of OTAs. He’s been awesome for me. He’s a pro in every sense of the word and I’ve certainly got to learn a lot from A watching his film and B just watching the way he approaches practice.”

As he tries to learn everything he can from a man he eventually hopes to take the job of, Fletcher is clear that there is only one way that he can approach this offseason:

“It’s very much just go in every day and do my best and try and be the best version of myself. That’s football in general, that’s what you’re always doing, but the fact that I have the opportunity to pick up little things about the way that a guy who has done it for a long time does it. It’s a beautiful opportunity for me.”

There is a long time between now and the start of training camp, let alone the first game of the 2021 season, and while the Panthers clearly drafted Fletcher to be the future of the long snapper position in Carolina, this is not a job that is going to be handed to him. Matt Rhule was clear when speaking to the media during rookie minicamp about what the dynamic is going into OTAs:

“JJ’s a stalwart around here, he’s been here a long time, he’s a really good player, he’s very very very consistent. We know that he’s going to have a great OTAs and camp and Thomas is a young guy with a lot of potential, he’s just going to have to get better at what he does and they’ll compete it out.”

Hopefully this piece has helped explain a little of what the Panthers’ coaches and scouts will be looking at when it comes to making this decision come final roster cuts in September, but exactly how this position battle is going to play out is something that fans will have to watch out for come training camp and the preseason games.