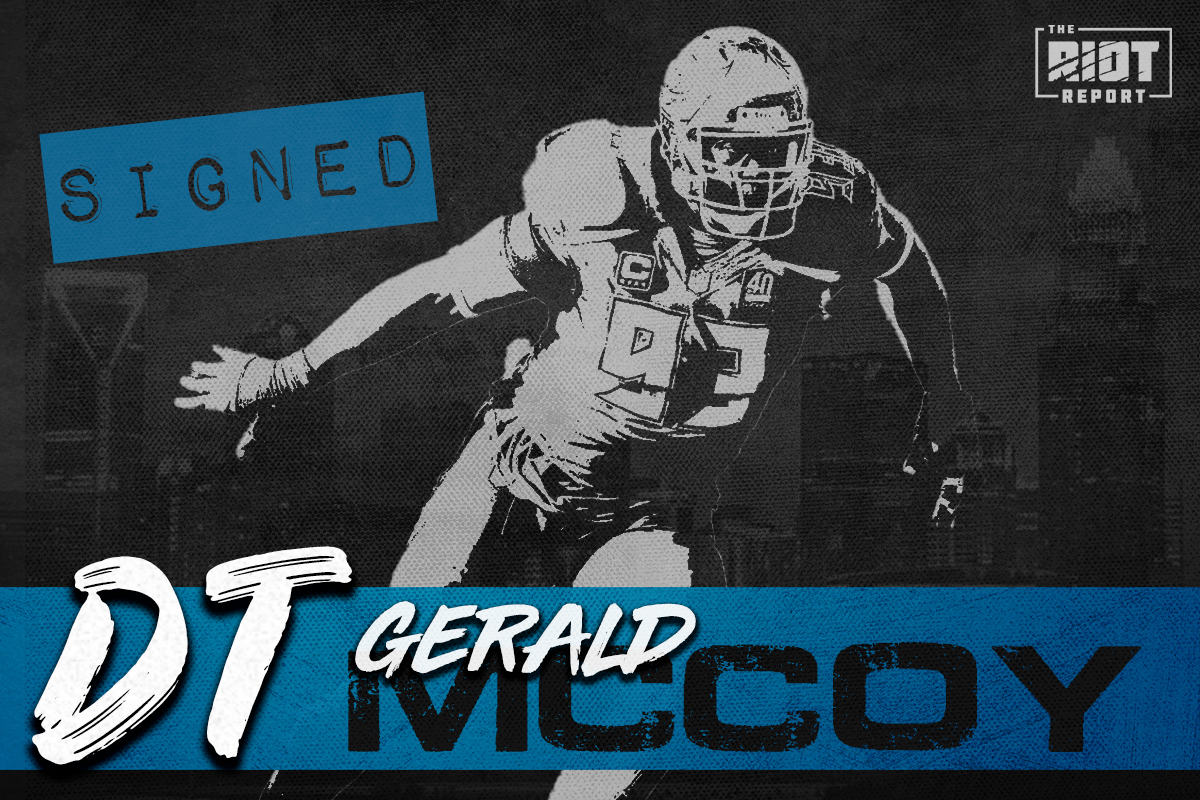 The Panthers just scored a victory over a division rival – and it’s only June.

Space was cleared by a combination of Matt Kalil’s release coming off the books as a post-June 1st designation and Torrey Smith taking a pay cut last week, leaving the Panthers with enough room to sign their top two draft picks, who are not under contract as of yet, and still have room for a signing in-season should injuries or other needs strike. Ian Rapoport had the full terms of the contract for McCoy: One year, $4M to sign, $3M base, $500K camp roster bonus, $500K in 45-man per game bonus. Plus, 6.5 sacks for $500k, 8 sacks gets him $1.5M. 250K for Pro Bowl, $250K for playoffs. Just $4M guaranteed, with the total up to $10.25M.

The Panthers will move forward with a three-man front of McCoy, Kawann Short and Dontari Poe, who have combined for ten Pro Bowl seasons to go with 267 quarterback hits and 103.5 sacks between the three of them – the 6-4, 300 pound McCoy has had 12 sacks over his past two seasons.

Leader of the Pack. pic.twitter.com/vu7ddOrZn5

The former Buc will take the place of either 2015 first-round pick Vernon Butler or veteran Kyle Love in the Panthers three-man front, neither of whom are signed past the 2019 season, in the starting lineup – another factor which may have played a small role would be the addition of McCoy to the Panthers’ compensatory pick formula. A one-year deal in Carolina followed by a large contract elsewhere would net the Panthers a mid-round pick in the 2021 draft, making the free agent addition something which would help Marty Hurney and Ron Rivera, who are almost certainly in win-now mode after a 7-9 season under new owner David Tepper, in both the present and the future.

According to Adam Schefter, McCoy was wowed on his visit here last week with the Panthers, with quarterback Cam Newton having a large part in his recruitment – there was also something personal in the 31-year old being released by Tampa Bay and summarily replaced, both in position and in number by Ndamukong Suh – Suh will wear #93 in Tampa Bay and signed a one-year deal worth $9.25m after the Bucs released McCoy to escape his $13m cap hit.

“I thought [our pitch] was received very well. Gerald’s a solid football player and we most certainly are interested and would love to have him be a part of what we’re doing…we’re just waiting patiently to hear what the outcome’s going to be,” Ron Rivera said after OTAs today.

Their patience was rewarded. The Panthers will play the Bucs twice this season, including on October 13th in London in addition to Week 2 in Carolina.