Part One: Where Has The Panthers’ Ground Game Gone? 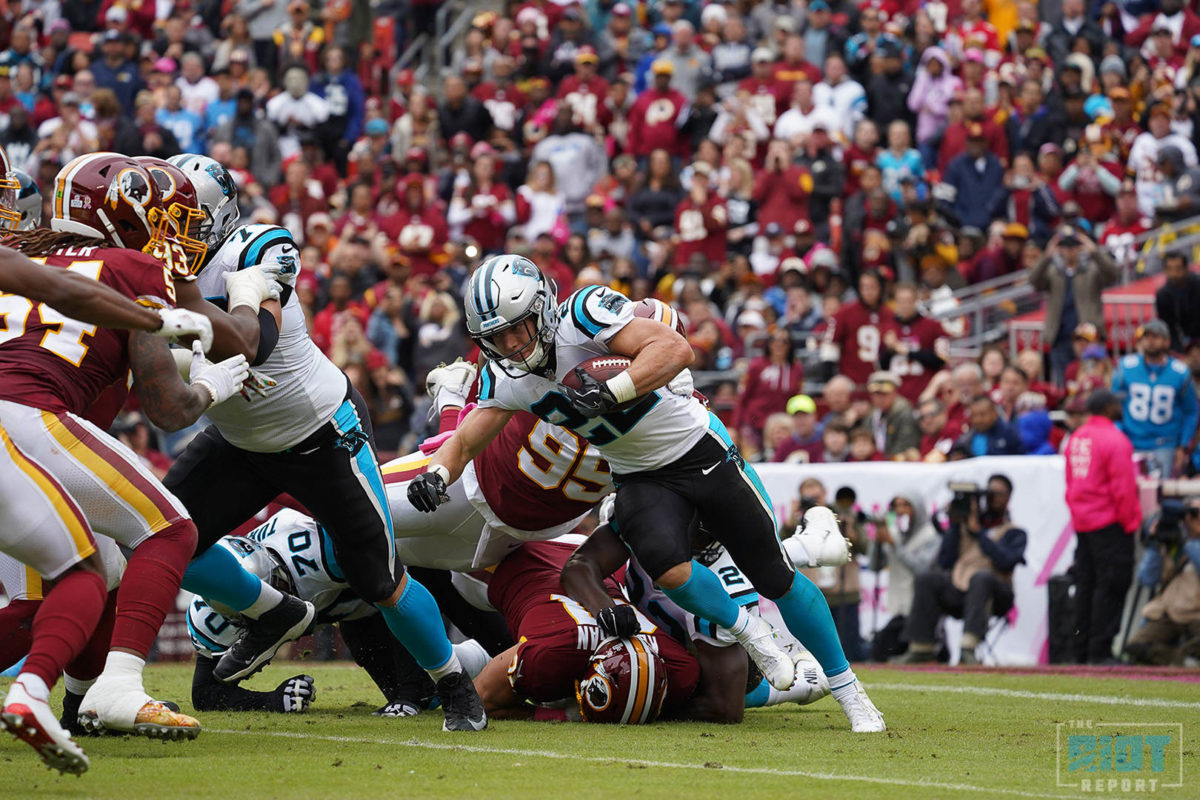 It’s always hard to assess a team’s rushing game effectively from just a box score, especially for a single game where a long carry of two can make a day of one yard gains and tackles-for-loss look like a good day at the office.

Take Saquon Barkley’s game against the Panthers just over a week ago for example; while the rookie did have a couple of nice carries, for the rest of the game – all thirteen carries in fact – he was actually held for a net loss, and yet his box score yards-per-carry average of 3.2 doesn’t sound all that bad. This might seem like a quibble, and to a large extent it is, but when it comes to judging how a team is progressing on the ground, especially in games such as Sunday where the Panthers only had eight running back carries, it can be hard to see the pattern on a game-by-game basis.

So what if we look at the yards-per-carry average with the longest carry of the day removed?

It should be noted that these numbers are for carries by Christian McCaffrey and CJ Anderson only.

There are two things of note here – first, that the Panthers have run the ball far less in their two losses than they have in their wins, and while some of this is because they are chasing the game and don’t want to run time off the clock, even down 17, the Panthers could have afforded to run the ball more than eight times, especially when they had four rushes in their first five plays. The second is that the Panthers’ rushing game has fallen off a cliff in the last two games – after averaging 166 yards per game on the ground through three games, they’ve only managed 99.5 over the past two. Given that the Panthers’ offensive line has only got healthier since the Bengals game, the question has to be asked: what has happened to the Panthers’ rushing game?

There are a lot of things which go into a successful rushing attack at the NFL level, many of which are very complicated, but in some ways it can be very, very simple. The more blockers a team has, the better they are likely to do and the more defenders a defense has in the box the better they are likely to do, with the crux really being the balance between the two forces. In other words, running into a loaded box is not ideal and should only be done on rare occasions. However, on at least five times on Sunday, the Panthers ran into a box where the defense had more defenders in the first five yards than the Panthers’ had blockers – it didn’t go well.

The most obvious example of the issue was on the following play:

Here, Washington drops the safety into the box (#36):

The Panthers actually ran a pretty nice play on this occasion, with Manhertz making a nice block to prevent the linebacker from getting outside of him, but all this works to do is to funnel McCaffrey into the arms of the safety – the eighth man in the box:

That is not to say that the Panthers couldn’t have run the ball, but rather that they probably shouldn’t, and that if they do insist on running the ball here – note this was a second-and-2 – they need to design plays which work to put the rushing lane as far from the safety as possible. For example, with the safety over the right side of the offensive line, a cutback play with the ball going outside the left tackle would have at least stood a chance of avoiding being blown up by the safety:

Of course, neither Cam nor Norv Turner are able to sit and design a play to run in real time based on each defensive look, but what they are able to do is diagnose what a defense might reasonably do to limit a rushing attack – say by bringing a safety down into the box – and what they might do in order to counter this. More specifically, when teams look to do this, the offense should look to check to a pass, play action or otherwise, or to a run where the safety is placed on the backside of the play. By failing to do this, the offense is being placed in a situation where they have almost no chance of success.

The Panthers had a similar issue on the opening play of the three-and-out before the half, where once again they ran the ball against a stacked box and, rather than running away from the box safety, they ran towards him once again and again failed to gain more than a yard or so:

The distribution of the defenders pre-snap is shown below:

What can be seen from this image is that Washington has three defenders outside of left tackle with just one additional blocker on this side. This means that runs to the right have a chance of isolating this double-filled gap, but instead the Panthers look to run the ball left. In doing so, they end up leaving two inside second-level defenders completely unblocked, with the guards blocking inside accidentally trapping Kalil and preventing him from making a block at all:

Even at this point, McCaffrey still has a chance to make the run work by bouncing the run outside right, but Moton is unable to keep his defender inside of him and the play is blown up in the backfield:

Without knowing the playcall, it is hard to know whether this play was always designed to go outside right; in which case the blocking here led to the play’s failure; but if this is the case, then Moton’s block is a little confusing – even if Moton had been able to force his man inside then the unblocked linebacker would still have had a chance of blowing this play up in the backfield. Again, it isn’t possible to know exactly how this play was drawn up, but it’s failure appears to be more than simply the execution of the blockers. Again, it is not possible to draw a play up from scratch in the moment, but if the Panthers are going to run in these situations then they would do well to maximize Washington’s shift to the outside left with a run to the right such as the following:

Of course, both of the plays shown above do not use Newton as a rushing threat besides the potential for him to keep the ball on a bootleg, and while these bootleg plays can be effective when used sparingly and executed well, for the vast majority of the time, the most effective way to involve the quarterback in the rushing game is by using option plays out of the shotgun, where the unblocked defender can be eliminated by forcing him to try and defend two potential ball carriers simultaneously.

However, the Panthers’ struggles from the shotgun will have to wait for part two – coming tomorrow…