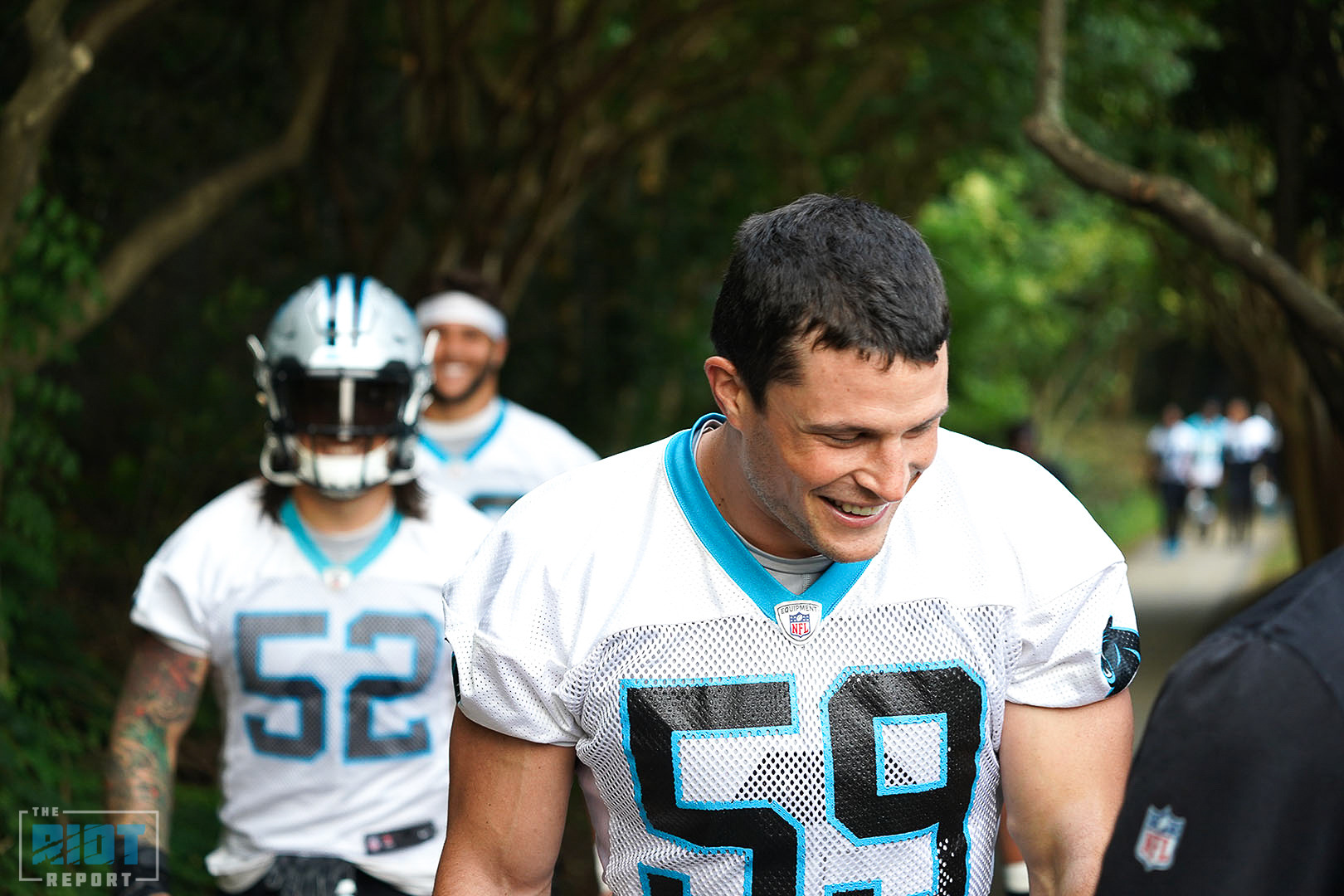 On Tuesday night, one of the best players in Panthers history hung up his cleats.

Seven-time Pro Bowl linebacker Luke Kuechly announced that he was retiring from the NFL at the age of 28; Kuechly made his announcement in a video released on the Panthers’ official Twitter account and as one would expect, Kuechly’s sudden news sent shockwaves around the NFL.

“In my heart, I know it’s the right thing to do.” pic.twitter.com/mSDyJ0iEMw

Some of Kuechly’s former and current teammates, as well as players he has played against around the league, sent their best wishes to the Panthers defensive leader.

Words can’t describe who Luke Kuechly is as a person, friend, and teammate. We have shared countless memories together both on the field and away from it. I feel honored to be his friend and I’ll always appreciate the impact he has had on my life. Love you buddy pic.twitter.com/0DHYkOwDp1

Can’t put into words what Luke has meant to myself and countless others. Thank you for some of the best memories both on and off the field. I’m so honored to have shared the field with not just the best player I’ve ever seen, but the best person I’ve ever met. Will always love you bro! To retirement🍻🎣

I just want to hold a Group FaceTime with #PantherNation I just want somebody to shed this tear with. I’m over here watching Luke Highlights. Telling myself “Mannn he just retired keep it together Tre!” Lol This Hurts! We’re Hurt! Greatest LB to ever put on a Panther Jersey! 😭🐐

I couldn’t be more proud to call you my brother! Congrats on a heck of a career! The game will miss you as much as you miss the game bro! I love you my brother! https://t.co/6jw3C1xeZK

I had the privilege of playing next to HOF #MikeSingletary & coaching HOF @BUrlacher54 & @LukeKuechly is worthy of that honor someday. But more important I will remember Luke’s sense of humor, his leadership & 4 being a great teammate. pic.twitter.com/MM96l6vZSS

After playing with @PatrickWillis52 I didn’t think it was possible for me to touch the field with another LB of his caliber. Then I went to Carolina. Enjoy retirement @LukeKuechly!

In the short time I have been here in Carolina it’s been a pleasure to learn from you and play with you. Will be missed💫 #greatteammate https://t.co/L9Dbyh4yjU

Forever my brother! You set the standard for me since I’ve come into the league. Hate to see you go, but love that left on top. LUUUUKKKKEEEE!! Stay svckafree August @LukeKuechly

When you grow up a LB you watch Luke Kuechly, but to actually play with him and pick his brain is still amazing to me. 🐐 pic.twitter.com/W1X7AVQaVw

Much respect to one of the great LBs to play football. You’ve given so much to this game and were a special player to watch. The game is losing a great one. Nothing but respect ✊🏾 https://t.co/Ja76illgi5

Luke was a fierce, intense competitor who loved his teammates and the game of football. A consummate pro who always believed in team first. He revolutionized the modern day standard for MLB’s. It was honor to coach him. He is the best of men on and off the field. 🐐@LukeKuechly

Great Man. Great Player. It was an honor to play against you brother. Enjoy the next phase 59, you earned it https://t.co/upzU48DtUH

Luke doesn’t even have social media he is that different. I have to see him soon in person and pay my respect always fun to play against. Meetings were always a little longer, and gameplans a little more complex. He kept you honest.

Damn mane ! The game gone miss ya Luke ! You had a Legendary career ! Thanks for teaching us how to play the game right‼️ https://t.co/b0H0PC1M6l

His picture was on the stadium, but he treated me (a career backup) like I was the most important guy on the team. He was a top ten pick, but worked like he went undrafted. Luke is an inspiration. Grateful to call you friend @LukeKuechly. https://t.co/SIgJb1bG17

Incredible player and person.
The game is going to miss you brother! https://t.co/UxKiTkww7S

Luke kuechly is one of most pure and authentic people i’ve met! He was a great teammate and friend! honored to have played with you! The gridiron will miss your presence but I’m excited to see what the next chapter has for you! love you Bro! #KeepPounding pic.twitter.com/0a6k4urcRu

Easily one of my favorite teammates and one of the top 3 best players that I’ve seen. Can’t wait to see what’s next for you! https://t.co/zrDa2mo2HU

As a fellow linebacker in the 2012 draft, Luke Kuechly was the cream of the crop.

I respect the hell out of his decision to retire. He missed 3 games in ‘15, & the final 6 games of ‘16 with a concussion. He is a hall of famer, but life is more than football. pic.twitter.com/O7ep4ZxjJP

That’s a man of character. https://t.co/wZv82YGg5L

One of the greatest players of our time! 🐐 @LukeKuechly Will never forget playing against you! Good luck in the future!! pic.twitter.com/OsCiFXHVPP

.@LukeKuechly you played the game how it was meant to be played…like a true bad-ass that was out there to hit everything and anything that moved and wore a different colored jersey. Best of luck to you. All the respect.

Luke, thank you for showing me the way and being the blueprint of how a LB supposed to play this game! I modeled my game and learned from you from the start man! I wish you nothing but success with your future endeavors! You had one hell of a ride! Meet you at the PFHOF! #maniac

Congrats @LukeKuechly on early retirement. You were a fearless player out there on the field. Soooo….when are you coming back??

Was a blessing being able to learn from you the last 5 years! Thank you for welcoming me with open arms into the LB room and showing me the ropes. Ima miss laughing and joking in the back of the room! Ima miss my locker mate, My teammate and MY BROTHER!! You the f’ing GOAT!! And the BEST DAMN LINEBACKER IVE SEEN AND EVER PLAYED WITH! You brought different swag to the game! Different energy, and Leadership to this team and Game! Im lost for words dawg! But health is the most important thing in life!! Im happy to call you a friend and Brother — enjoy retirement bro! #BTG #StandardIsTheStandard #LBC

Antwan Staley has written for publications such as USA TODAY, Bleacher Report, the Miami Herald and the Palm Beach Post. Follow him on Twitter @antwanstaley.
Related:   Earning the Right to Win: What Matt Rhule Can Learn From Mentor Tom Coughlin