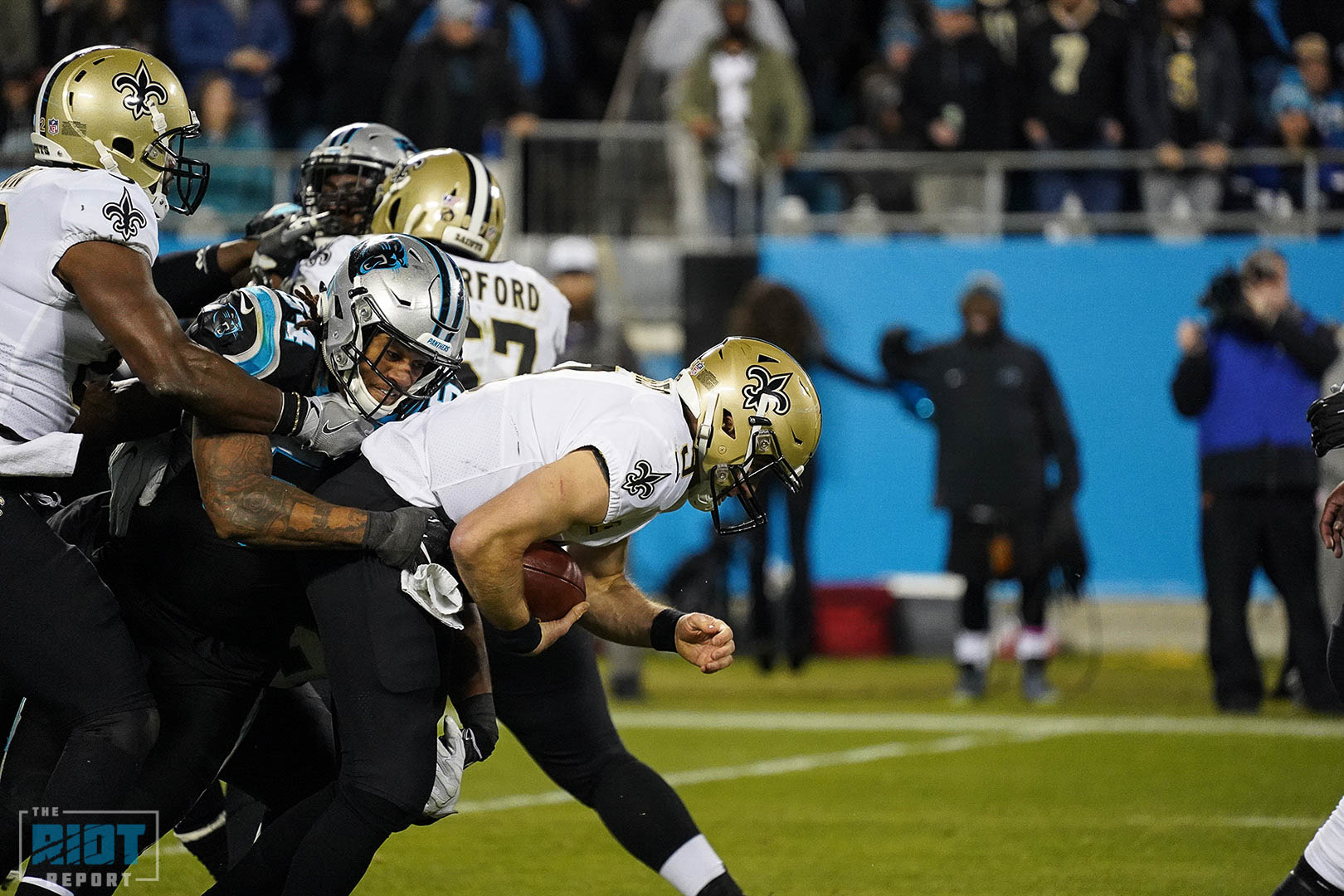 In order for the Carolina Panthers to upset the New Orleans Saints, the defense would have to step up and play the best football they have played all season against the #2 scoring offense in the NFL – and they did just that. Saints’ quarterback Drew Brees completed 23 of his 35 pass attempts for 203 yards and one interception and the Saints only scored 12 points. It was only the second time this season Brees hadn’t thrown a touchdown and it’s worth mentioning this is the second-fewest points scored by New Orleans during the season – the lowest amount of points scored in a victory.

But ultimately, it was still a victory for the New Orleans Saints as the Panthers fell to 6-8 on the season.

During the first five games of their current losing streak, the Panthers allowed their opponents to score an average of 30.4 points – so a 12 point effort seemed as if it would be enough to get the job done – but during a streak that continually referenced a lack of complementary football, a great defensive performance was bookended by a poor effort on offense.

Regardless of the dominant play by the defense and the spectacular individual efforts on defense – Luke Kuechly and Thomas Davis combined for 25 tackles, James Bradberry forced two turnovers and Donte Jackson had the first ‘pick-two’ in franchise history, the Panthers were eliminated from the playoffs in terms of everything but semantics; we were able to speak to a disappointed Shaq Thompson after the game in an exclusive locker room chat.

There is no such thing as a moral victory, but you all played some of the best defense we’ve seen all season, is that any consolation?

ST: “That’s what we’re capable of man – give us a call and let us play. We know they’re a high powered offense, and we know them. They are going to try and come out here and embarrass us, especially on a Monday night. But, you know, the defense stepped up; we stepped up big time and held them to 12 points, two field goals and one touchdown. What more can you ask [from] a defense beside just do a little more? We balled out. You know, we’ve got Atlanta next and we move on. This one is going to sting a little bit. But, we’ve got two more games. We got one more home game and an away game, just gotta finish strong.”

ST: “Finish it. I mean, anything can happen. We can still fight our way, scratch, crawl, to get into the playoffs.”

What went wrong in this game in your opinion that couldn’t get you guys past the Saints?

ST: “They played good defense. We played good defense. We’ve just got to find a way. It sucks, but I’m proud of this team. Everybody, in all phases, fought. They had one kickoff return that we probably could’ve covered better. But….I’m proud of this team, man. We kept fighting. And I will always go into any game any team with these boys. I wouldn’t trade nobody out – nothing.”

Q: Your teammate Mario Addison said you guys wanted to do this for head coach Ron Rivera, is that true?

ST: Yeah, I wanted to do this for Rivera. I mean, they tried to embarrass us last year, bringing out the broom and all that other stuff. We know straight up, man, I’m just going to say it – they can’t play with us one-on-one. They can’t.”