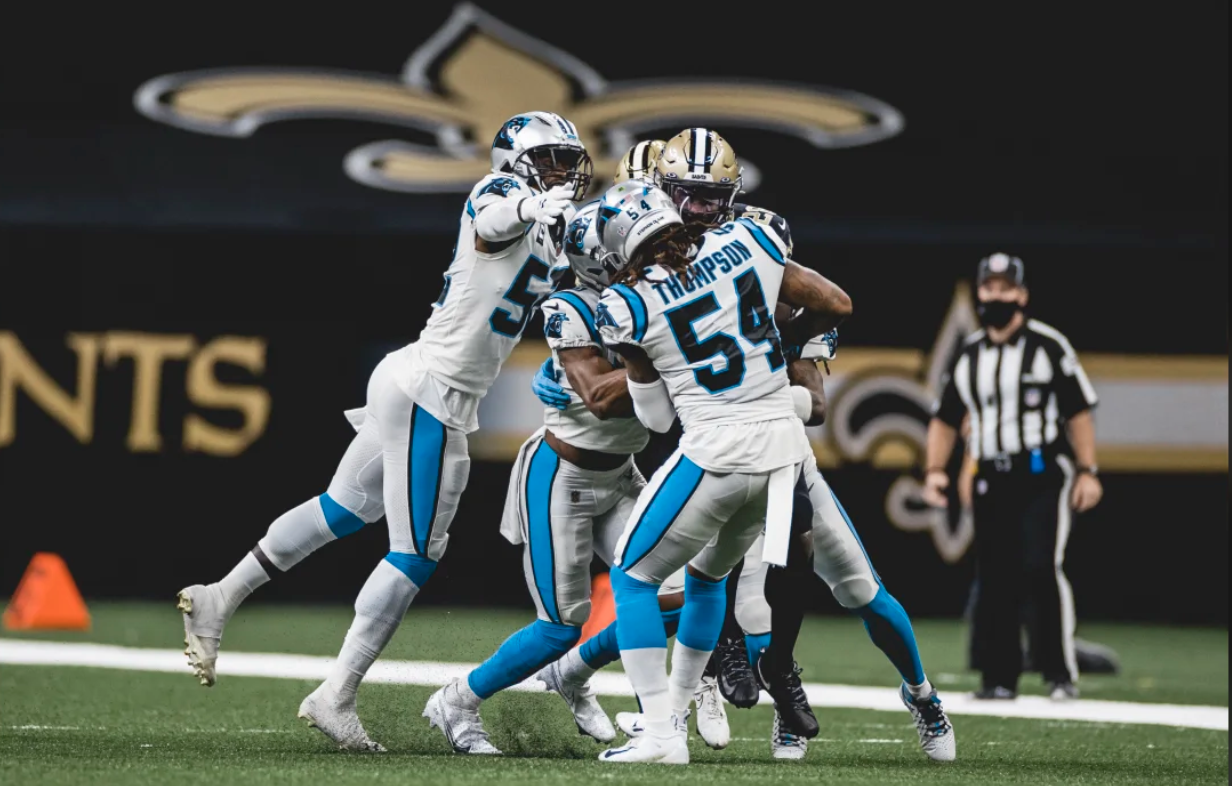 The Panthers are bottom-five in the NFL in terms of yards per carry and the Saints ran for 4.8 yards per rush in Week 7 – Thursday, they’ll face Todd Gurley and the Falcons, who gashed them for almost seven yards per carry a couple of weeks ago.

Having replaced almost everything even vaguely associated with last year’s defense, it is not surprising that not everything has fit seamlessly together given the contracted offseason. However, as we approach the halfway mark for the 2020 season, the Panthers’ run defense is still struggling, ranking 29th in the NFL in both yards-per-carry and defensive touchdowns allowed. This was on show against the Saints as well, as the Panthers allowed a number of big carries that allowed the Saints to get ahead of the chains and even break off a handful of chunk plays.

So then, what went wrong with the run defense in Week 7 and how can it be fixed?

This is a comparatively minor point, but is worth getting out of the way to start with.

Late in the game, as they have a number of times this season, the Panthers looked to employ multiple deep defenders pre-snap and the Saints were able to get a couple of solid pickups simply from the Panthers not having many defenders in the box. On these plays, there really isn’t much complicated going on in terms of what the Saints are doing, they just have more blockers near the tackle box than the Panthers’ have defenders:

This is a tactical sacrifice on behalf of the Panthers – by lining up in this way, they know they are making themselves vulnerable against the run and often look to counter it by using blitzes in combination with multiple zone defenses to try and make this at least something of a risk for the Saints; though, on these occasions that didn’t work.

This isn’t the end of the world, but there should maybe be a little more consideration about when the Panthers use these formations – they are going to allow teams to run on them from time to time if they are overused or used at the wrong times. However, this wasn’t why the Panthers couldn’t stop the run on Sunday.

Teams in the NFL use a lot of motion, certainly compared to what they did 20 years ago; a major reason for this is that in the run game, it can help to stress the gap discipline of the defense and create miscommunications and unfilled gaps. However, on Sunday, the Panthers managed to generate these issues for themselves when faced with pre-snap motion, and on three occasions, it led to three long plays.

Matt Rhule said it best on Monday: “Too many, ‘Hey, my bad’ plays that popped. We all have to get a little bit better this week in terms of just handling our responsibility.”

Here is the first of these:

What goes wrong is really very simple. The Saints motion their fullback out to the flat and Tre Boston follows him, but Shaq decides to shift to where Tre was. In doing so, he double-fills the outside gap while leaving the B gap he was occupying previously empty for Kamara to run into and through to the second level. This can be seen clearly in the pre-snap alignment:

This looks to be on Shaq, as he clearly sees Tre going out with the fullback, and while players are going to make mental errors from time to time, this was a pretty costly one.

However, it wasn’t the only one the Panthers made on Sunday, as can be seen in the following clip:

Here, the Panthers shift across pre-snap and while Brees looks to check to a new run, presumably to try and run the ball at Tre Boston who is tasked with an inside gap, the Panthers are actually in a pretty good position:

The issue is that Burns doesn’t stay in the C gap where he is aligned, but rather looks to swim outside, leaving the C gap unfilled – the running back is able to fit through this and into the second level. Here it is harder to know who made the mistake as it is possible that Burns just played the wrong gap but it is also possible that this is an issue with the communication and that Burns initially started with an outside responsibility with Whitehead (who starts offscreen outside the tight end) didn’t communicate the change to him which is what left the gap unfilled. Or, perhaps, Burns was trying to do too much.

“You can’t get too nosy. You can’t feel like you have to make every play,” Burns said this week. “That’s something I have a problem with sometimes, I feel like I’ve got to make every play. But as long as you do your job and just stay disciplined in your gaps, don’t allow anyone to take you out your gap, or you being nosy take you out your gap, everything should be fine.”

However, while who is to blame is unclear, this is another unforced mental error, and it wasn’t the last. The Panthers allowed a third big run play as a result of misadjustment:

Here, the Saints again motion a blocker pre-snap and the Panthers adjust, but here is the result:

While it looks clustered, the left side of the screen is actually properly aligned and the Panthers do have five defenders for the five gaps from the left A gap through to the right D gap, but they just aren’t in the right places.

On the motion, Shaq shifts across to the outside gap and Tre moves across so that he is now filling the B gap in Shaq’s place. This seems to be an issue of miscommunication as what Shaq and Whitehead do is contrary to what Franklin and Chinn do, but what Tre does (the initial step to move down to the D gap before shifting inside) is counter to both, meaning the Panthers effectively react in three different ways to the same motion.

Not helping things is Brown being beaten by a reach block, but even if he had stayed outside the center, this play was unlikely to end well for the Panthers.

These miscommunications are even more frustrating because they are being made by veterans and not the rookies.

This scheme is new for pretty much everybody this year – it is a mixture of what Phil Snow ran in college and more conventional hybrid NFL defenses – but halfway through the season, the Panthers really shouldn’t be making these errors. This is certainly something that will have been picked up in meetings this week and the Panthers need to spend some time in practice just making sure they are adjusting properly to pre-snap motion – these plays are really inexcusable.

However, sometimes the Panthers didn’t even need the Saints to motion at all to get in the wrong gaps, and there were an additional couple of plays where the Panthers just didn’t get themselves lined up properly. Here is the first:

Here is the pre-snap alignment:

What went wrong here is really very simple. There is nobody even close to being in the B gap on the left side of the screen. One of Tre or Whitehead was almost certainly meant to be in this gap (there is a defender off the right of the screen who is in the D gap). This, again, could be a communication issue – but even if Whitehead thinks that Tre is in the B gap, Tre knows that he isn’t  -and even if the B gap is Whitehead’s responsibility, Tre should both be telling him that and replacing Whitehead in the A gap. Whitehead might be completely innocent in this play, but one of him or Tre should have been in that B gap and instead they just have a man over the the right side leaving the Saints with a huge hole and they crash down to that side of the line.

The final play is a little different, in that the Panthers were desperately trying to substitute in time for the snap and they clearly just weren’t ready and in the right place, but even so they really need to not be lining up like this:

Here, the motion makes this even worse that it started being, but the Panthers just have way too many people on the right side of the play.

This is how well that goes:

You can see the impending disaster before the ball carrier has even reached the line of scrimmage:

Here, the Panthers have Tre and Franklin taking on the two blockers and while that is something of a mismatch in itself and Tre doesn’t do a great job of staying outside the block, Whitehead is just so far behind the play he has no chance to make the tackle.

Taylor is saved somewhat in terms of gap discipline by the chaos that Brown and Kerr are able to create on the interior. Again, this is the Panthers veterans in the back seven just not getting lined up properly – this is really not something that should be happening nearly two months into the season.

The Panthers have clearly decided that they are going to use Tre Boston around the box a lot with Chinn and Franklin playing more in space; while this isn’t the worst idea, they need to make sure that he, Shaq and Whitehead are both on the same page and know where they are meant to be/how to respond to various motions. At the moment, the three of them being in the wrong place has been at fault for almost all of the issues the Panthers had in allowing big runs recently.

Eliminating these plays might not make the Panthers a top-five run defense, but it would certainly go a long way to moving them back into the middle of the pack when it comes to preventing long runs. Oh, and when they do line up in the right place, they have to make sure they stay in the right place – such as the following play where Shaq allows the tackle to get inside of him and so creates an inside rushing room:

The Panthers have a lot of young defenders out there, and many of those on the defensive line are still getting used to the speed of the NFL and continuing to work on their technique. Ultimately, there is probably a ceiling to how good a run defense the Panthers can be this season, but at the moment it is just gap discipline on the second level that is really hurting them.

With a short week now before the Falcons game it might not be possible for the Panthers to get this completely fixed in time for that matchup, but with that being followed by a ten-day break, they really have to have this fixed before they take the field against the Chiefs. This season is not about winning titles as much as it is about learning and assessing where the Panthers are, but that is going to be increasingly hard to do if opponents are able to just run the ball down their throats and force the offense to chase games while the defense is kept on their heels.