What Joe Brady Is Doing To Fix The Panthers Run Game 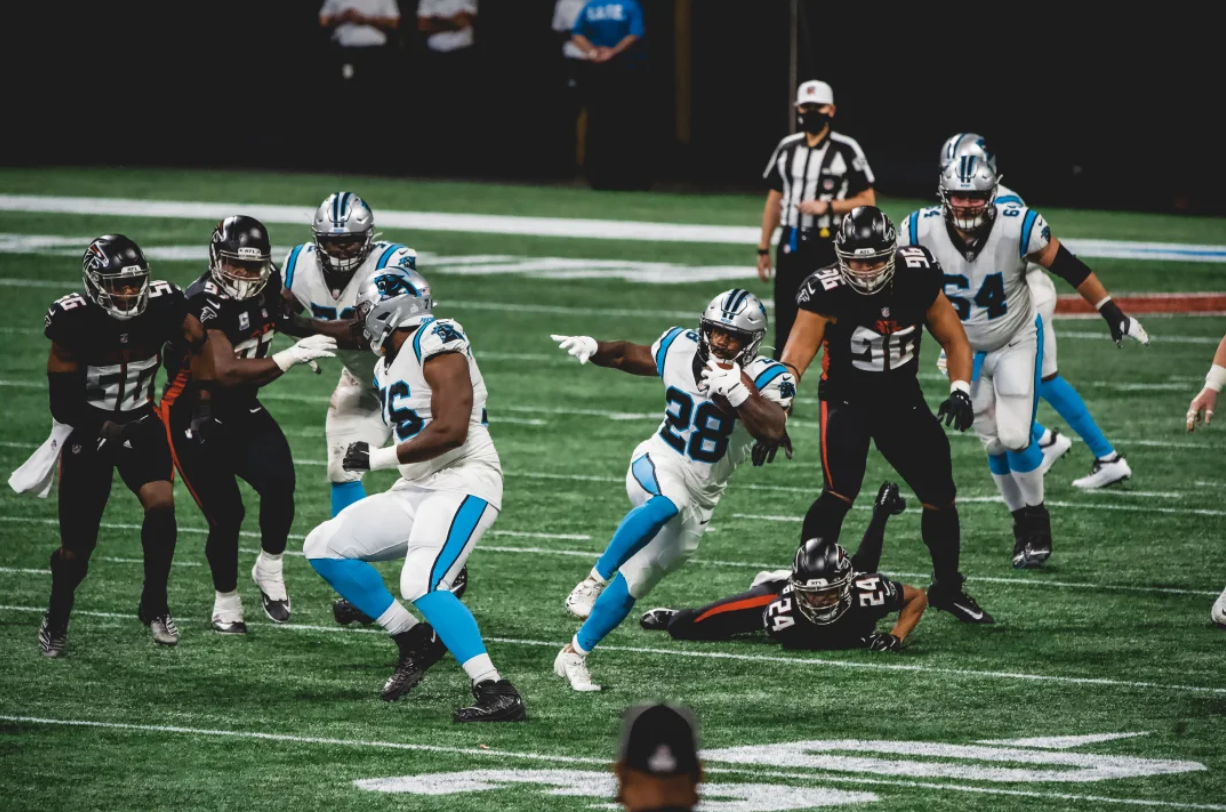 After the Panthers’ win against the Chargers, one of the things that Matt Rhule made a point of mentioning was that despite the win, the Panthers’ run game needed to improve. The Panthers had failed to reach four yards-per-carry and rushed for just 81 yards; despite winning the game, they had been unable to close the game out on offense – instead, they were forced to lean on the defense to finish the game.

Jump forward two weeks and the Panthers are coming off a game where they ran for over 120 yards at 4.6 yards-per-carry and were able to lean on the run game as they drove down the field while running out the clock at the end of the game in Atlanta. So what have the Panthers changed to allow them to run the ball more effectively, and how could they improve still further?

Knowing When To Run The Ball

As Brock Huard made repeated note of against the Falcons on the FOX broadcast, the Panthers did a really good job of identifying when the Falcons went to a light box and checked to run plays to allow them to get the most out of these situations. This is far from a ground-breaking approach but something that NFL teams probably don’t do enough of:

“That’s the type of quarterback that Teddy Bridgewater is,” said Joe Brady. “He can see and identify the looks and try to get us into the best play….he has the ability to do that on any snap and I believe in ownership from [the quarterback].”

“He’s not sitting there like ‘hey, I’ve got to hand this ball off into a bad box,’ he knows that we have answers and let’s get to a different play and I think Teddy does an incredible job at that.”

The Panthers aren’t doing anything hugely radical on these plays from a schematic point of view – and they didn’t execute either of the first two plays perfectly – but in all cases they simply had more blockers than there were defenders and so are able to get ahead of the chains even when they miss a block. Of course, the Panthers have a chance to turn some of these positive plays into big gains if they are able to execute better, but these are still good plays that are the product of running at the right time, rather than doing anything else at a hugely high level.

The other thing the Panthers have incorporated more of as the season has gone on is the option game – this is something that we thought would be made more of under Brady given the offense he ran at LSU. While Bridgewater is never going to be a 1,000-yard rusher, he has shown this season that he can hurt teams on the ground; by offering the threat of him keeping the ball, the Panthers are able to get a numbers advantage when they otherwise wouldn’t have one.

The Panthers ballcarriers do a good job getting the most out of these plays in both of the following instances, but they are able to get into the second level as a result of the Panthers being able to leave an edge defender unblocked:

Bridgewater probably needs to run the ball with a certain frequency in order to make the edge defender respect the fact that he might run the ball, but this play works mostly because of the doubt in the defender’s mind rather than because of Bridgewater’s prowess as a rusher. LSU extended this a step further by including a lot of screen and quick-pass options on the read-side of the play to create what is effectively a triple option to hold the flat defender if Bridgewater does hold the ball.

This might be something to look out for as the season goes on, but even without it the effect of adding some option elements has certainly been part of how the Panthers’ have been able to invigorate their run game.

With McCaffrey getting most of the carries through the first two weeks, the Panthers ran somewhat hot and cold on the ground in terms of play-to-play production, in part because of their focus on trying to get their outside run game going. This is still something the Panthers do a fair amount of, and it does allow them to generate some big plays:

But it also places quite a lot of strain on the Panthers’ offensive line – as well as these big plays, there are also occasions when these plays end up going nowhere:

Or even force blockers into holding:

When they are playing with a reasonable lead as they were for large periods against the Falcons, the plays that go nowhere are compensated for by big plays, but this can lead to something of a stop-start offensive output that can lead to the offense facing third-and-longs that might have been avoided if they look to run the ball downhill more.

This isn’t a situation where one approach is better or worse than the other, but given the focus the offense has placed on the short passing game and moving the ball with consistency rather than big plays, the fact that they have moved to more of a downhill running style as the season has gone on looks to have helped them incorporate the run game into the overall offensive attack more effectively.

While the Panthers have certainly improved in how they’ve run the ball, there is also a reasonable amount of room for development.

However, sometimes you simply have to tip your cap to the opponents – while there are unquestionably things that individual players can work on in the following plays, Grady Jarrett is very good. While he might not have put up flashy box score numbers in Week 5, he was still a highly disruptive force for the Falcons – he’s the one wearing #97 and wreaking havoc:

Things won’t get any easier in this regard on Sunday against the Bears either, with Akiem Hicks and Khalil Mack both having the potential to wreck a run play or five, but the opponents get paid too, so the focus for improvement should be on the plays where the Panthers made the mistake, rather than simply getting beat.

The first play to mention in this regard is the first carry for Trenton Cannon as a Carolina Panther – where he got met in the backfield for a short gain:

This is a read-option play of sorts and Moton has the responsibility for the linebacker who ends up making the tackle.

The Panthers do a decent job of blocking up the front side of the play and with Miller pulling through to close the back side off this play, he has a chance to get a good chunk of yardage if Cannon can get to the gap. Some of what goes wrong here is just good play by the linebacker, he seems to spot that Miller is pulling pre-snap and shoots the gap he is vacating. Moton was probably never going to be able to block him out of the play entirely, but he probably could have done a better job of getting his outside shoulder upfield to give him a chance of at least slowing the blitzer down on the angle and giving Cannon a chance to hit the gap.

On this next play, Okung does a good job of using his feet to get him to the right place but doesn’t get his hands up early enough and is unable to secure the block:

Neither play is a huge indictment on the player in question, there are just little details that need addressing. Crucially though, on both plays the issue is an individual error – the play itself should and hopefully will work in future. Where the Panthers still have the occasional issue, however, is in maybe asking a little too much of their blockers, though this is definitely something that has gotten better over the past couple of weeks.

But plays like the following are an example of where they can still improve from a play design standpoint:

Let’s look at what the Panthers are trying to achieve here:

The Panthers look to crash the LG, C and RT to the right and block out what becomes the back side three of what is effectively a five-man front.

They also run a double team on the front side 3-tech and inside linebacker, and I think they hoped to seal the play outside the TE in this way, allowing them to leave the backside LB unblocked – though this is undone by Grady Jarret getting outside the tackle and preventing Okung from being able to drive him inside and ultimately forcing Davis up the middle.

The Panthers also use Thomas to reach onto the front-side defensive end with Armah and Miller blocking across to create a seam between Thomas and Manhertz for Davis to run to. Cooper is tasked with occupying the corner on a fake slant before blocking the safety.

As already mentioned, the play failed because Jarrett gets outside Moton, bringing the backside linebacker back into play and preventing Manhertz from getting to the linebacker at the same time. But even if Jarrett had been driven inside, this play would likely still have failed because Thomas isn’t able to get inside the defensive end who is able to dive inside on the play.

This is something that got the Panthers into trouble early in the season – trying to get tight ends to make difficult blocks on NFL defensive linemen doesn’t work at this level. Whether this is a little bit of naiveté by Brady – whose LSU tight ends probably could make such blocks against most college defensive linemen – is hard to know, but the Panthers have improved in part because they have made things easier for their blockers.

This play is an example of the kind of play that they have mostly been able to eliminate.

The Panthers have done well to improve their run game without having to drastically improve their offensive line play, and while they will hope that the offensive line will continue to improve as they warm into the season – it is worth noting that the game against the Falcons was the first time this season that the Panthers had their full first-team offensive line out there. If they are able to continue to run the ball at the right time, and intermingle the option threat enough to be able to run the ball when teams do add another man to the box from time to time, they should be able to have a productive run game – with a chance to go beyond that if they are able to get the consistently excellent running back play they have had all season, regardless of who lines up in the backfield.