Running Back Rodney Smith Has An Opportunity – Can He Seize It? 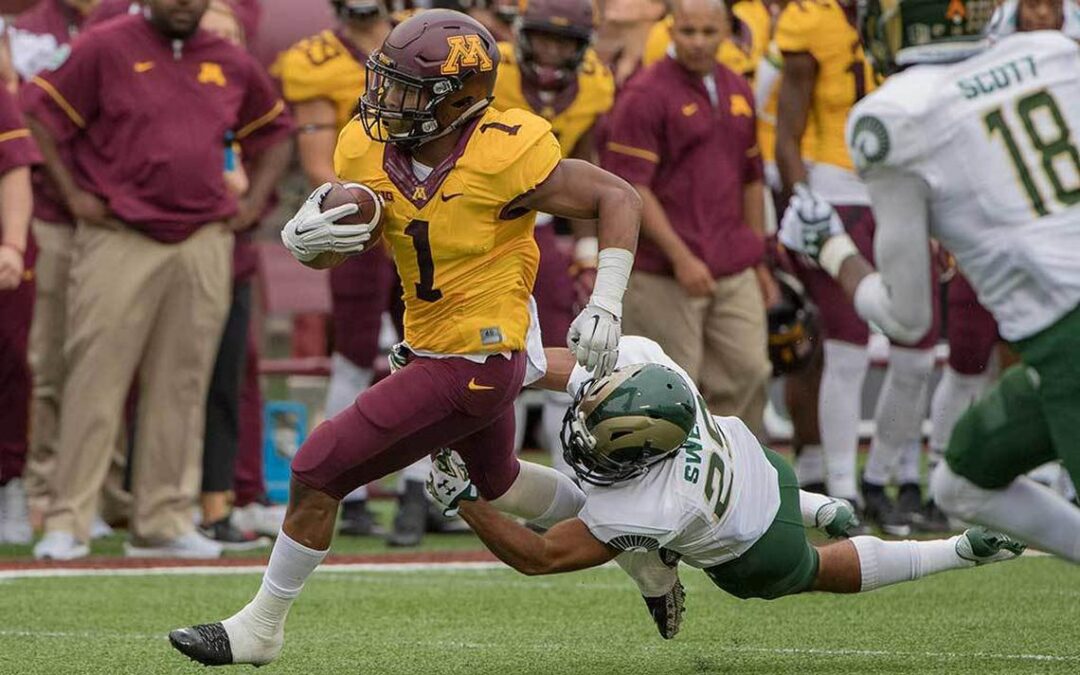 So in 2018, as doctors told him that he was going to face another tough year of recovery from his second torn ACL in less than a decade, the running back who was coming off being named team MVP and Honorable Mention All-Big-Ten as a junior didn’t give up – never wavered, only hoped that the NCAA would grant him a rare sixth year of eligibility after redshirting his freshman season in 2014.

“I saw it as an opportunity not only to finish out what I started at Minnesota on the football field, but to pursue another degree – I had [already] started my masters’ degree and everything that I wanted to accomplish was still right there in front of me,” Smith told The Riot Report last week in a phone interview from his home in Georgia. “So I saw it as another opportunity to not only pursue the dream of being a professional football player, but as an opportunity to ensure that I had things lined up for life after football.”

The additional year of eligibility was granted by the NCAA – and Smith took advantage.

The Georgia native not only holds the Gophers’ all-time record for all-purpose yards, the 24-year old running back is two classes from receiving his masters in youth development and leadership – he fell in love with working with kids through volunteering at the Boys & Girls Club or the Big Brothers, Big Sisters program, visiting hospitals and schools with his teammates throughout college and social work internships.

Not many players can enter the NFL only a few credit hours short of a masters’ degree. It’s quite an accomplishment.

“I’m also a little older, but thank you – I appreciate that,” laughed Smith. 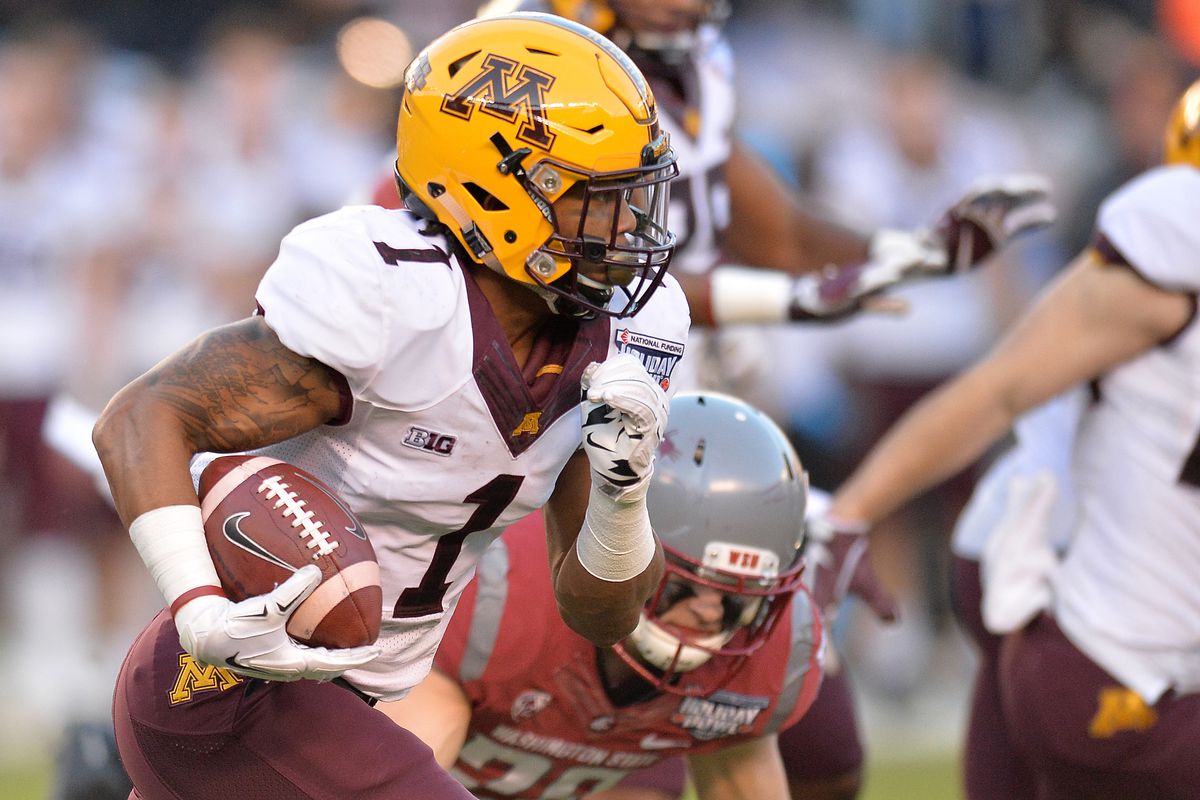 After spending six years at Minnesota, Smith is a little bit longer in the tooth than other rookies – older than Christian McCaffrey and only a couple of months younger than both Reggie Bonnafon and Jordan Scarlett, who already have NFL experience – but the setback of being a slightly older running back won’t keep him from embracing the opportunity he has this spring and summer to become a player at the next level.

“Being in college six years doesn’t mean I played a true six years of college football,” said Smith. “I think that gets lost in the mix when people say I was a sixth-year senior; you only get a true four years of eligibility to compete.”

That’s true – in his six seasons, Smith had fewer carries than Wisconsin’s Jonathan Taylor and only 100 more than Ohio State’s JK Dobbins had in their three-year careers – both of those Big 10 running backs were selected in the second round of the 2019 Draft. They were also the only two rushers in the conference to have more yards on the ground last season than Smith, who the Panthers signed a few hours after the draft ended last month.

Congrats to @Numerouno1_ on breaking the #Gophers career all-purpose yards record! He moves past our guy @DThompsonMN who has held down the top spot since 1989. #Gophers #SkiUMah #RTB #MDvsMINN pic.twitter.com/wzxdPymXBf

The 5-11, 210 pound back turned a torn ACL into a masters’ degree – and he wasn’t too shabby on the field during that extra season, either. After suffering the injury only 25 carries into the 2018 season, Smith rushed for 1,163 yards (his career high) and eight touchdowns as he rotated with two other running backs – all told, Smith had over 4,600 yards from scrimmage and 29 touchdowns in his Minnesota career.

After taking the bulk of the carries during his breakout, 16-touchdown 2016 campaign, Smith was part of a committee that featured redshirt sophomore Mohamed Ibrahim in 2019.

The freshman Ibrahim broke out in 2018 while Smith rehabbed his injury, in part because every Monday while he was hurt, Smith would sit with Ibrahim and help him prep for that weeks opponent. The first meeting was ahead of Minnesota’s Week 4 matchup with Ohio State that season – Ibrahim had 157 yards and two scores.

The next week, Smith was in Assistant Head Coach Kenni Burns’ ear with plays he thought would work and game plan ideas.

A torn ACL wasn’t going to keep Smith from helping his team.

“He has the intangibles that you’re looking for, from a football standpoint. He’s going to work hard at it, he’s going to study it and know it in and out – I always said he was like an assistant coach to me,” said Burns. “That’s how I treated him – he’s a player that’s going to maximize his potential from that standpoint by playing the game faster in his mind.”

“He’s so much wiser and more mature for his age.” 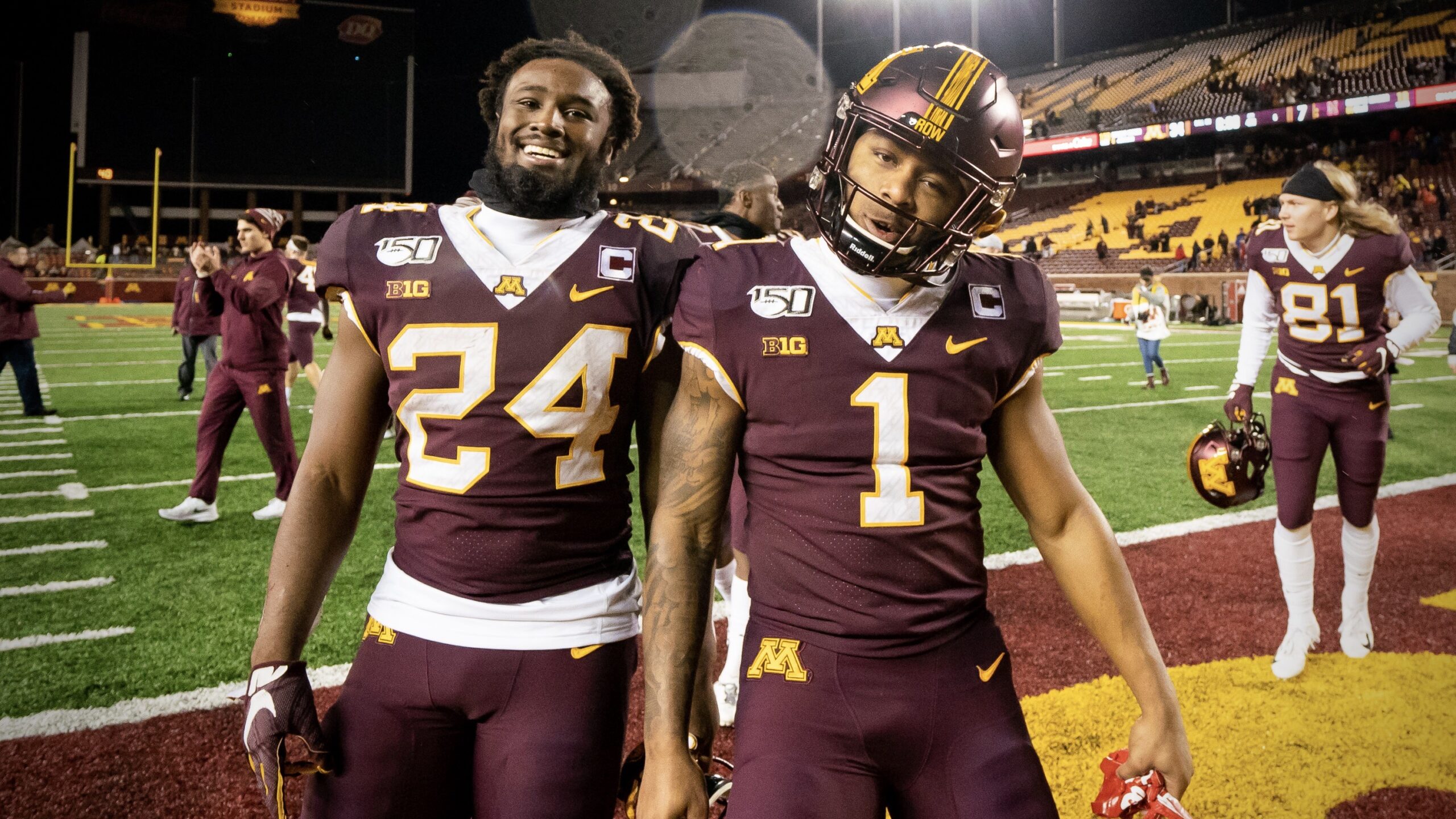 When Smith returned in 2019 and rotated carries with both Ibrahim and Shannon Brooks – “a pair and a spare,” coach PJ Fleck would say – the leadership came easily to him and splitting time wasn’t a problem, especially as Smith took a few games to get his legs under him after sitting out all of the 2018 season. Besides, learning how to keep rolling even while other players on the field, how to take mental reps, how to continue to succeed even without the ball constantly in your hands is a good primer for playing in the NFL.

Especially if you aim to be on the roster behind Christian McCaffrey.

“You’re all going to get your opportunities – when you get them, you’re going to have to make them count,” said Burns. “They could’ve complained, bitched and moaned about not getting their reps, but not one of them did. And I think that started with Rodney because he was the starting tailback and the leader.”

“I don’t think anybody prepped harder than that young man. He worked at it – he always has. And that’s why I love him, because he was such a good role model for the guys behind him.”

The running backs kept a mop bucket in their position meeting room and each week, the three running backs would write down their rushing yardage and toss them in the bucket – “no matter who gets the yards, it’s all in there together.”

During the final game of Smith’s college career, the Outback Bowl against Derrick Brown and Auburn, it became clear that Ibrahim was having a day – 20 carries for 140 yards and a touchdown. Smith could have pushed for more carries in his final audition for the NFL, but he was content to watch his protege seize the day and help the Gophers to a 31-24 win to cap off an 11-2 season.

“Getting My Wiggle Back” 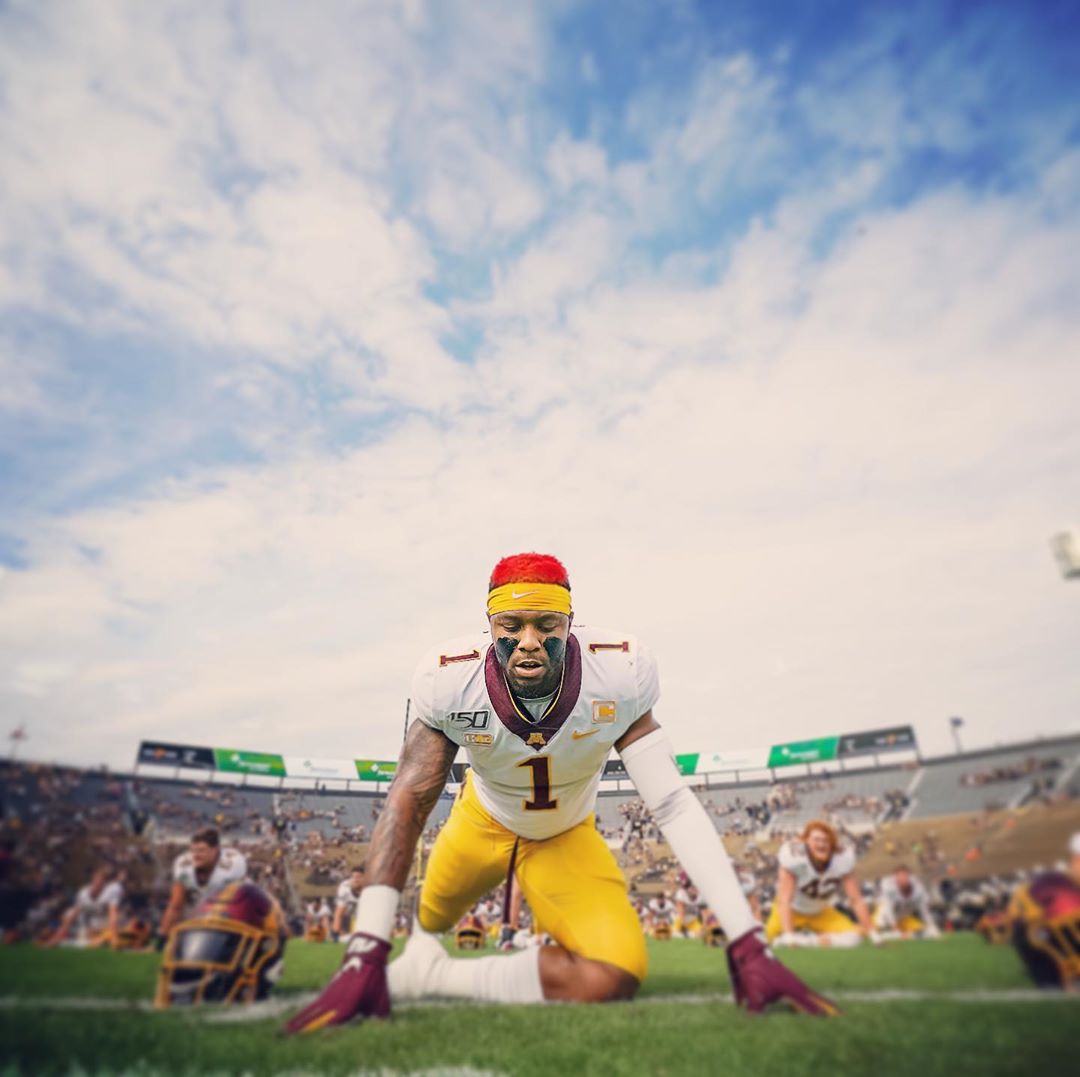 After working his way back from his injury and rushing for a career high in 2019, Smith is anxious to get back out on the field at the next level.

“I definitely feel good – I’m getting back in the groove of things,” said Smith. “Working on getting my wiggle and explosiveness back now.”

Instead of participating in spring or fall camp last year, Smith would watch old film of himself to identify where he could get better. This year, despite being unable to meet his new teammates or coaches, he’s been training not just to be a running back, but to play everywhere on the field to show the Panthers’ coaching staff how he can contribute to an NFL team. As is the case with any undrafted free agent, it’s going to be an uphill battle to make the roster.

But where you see uphill battles, Smith sees opportunity – the running back room is far from settled behind McCaffrey, with 2019 top backup Reggie Bonnafon, fifth-rounder Jordan Scarlett and late-season waiver pickup Mike Davis his main competition for a roster spot; while Bonnafon had bright spots last season, he is still a relatively unknown entity. Scarlett had only four carries in nine games before being placed on IR and Davis can be released for a $3m cap savings.

“Coach Brady wants me to learn more than just running back, they say they plan on doing a lot of two-back stuff, so I’m having to learn every position on the field. [Running backs] Coach Nixon wants me to learn the X, Y, Z, F & H,” said Smith about his virtual offseason with the Panthers thus far. “They want me to learn what all of the receivers are doing, just in case they do have two backs out there on the field.”

In addition to meeting with coaches and teammates via teleconference daily, Smith is working out with Chip Smith, one of the foremost speed and strength experts in the world and “the founding father of the sports performance training industry” – in fact, last week he was joined by Panthers center Matt Paradis, visiting for the day last Friday, for a workout.

And, like every undrafted free agent, he is well aware of how much special teams can help his case – Smith returned two kicks for touchdowns in college and holds the record for longest kickoff return in school history.

“If you can be used in multiple aspects of the game, it can get you on the field, whether it’s on punt, punt return, kickoff, kick return,” said Smith. “That’s definitely what I believe teams are looking for.”

Whatever he can do to get that wiggle back.

Towards the end of our conversation, I asked Smith if there was one play from his college career that summed him up – if he could show only one play to his coaches to define what kind of player Rodney Smith is, what would it be?

He only hesitated a moment.

“Rutgers. 2016,” said Smith. “I don’t remember the exact down and distance, but I know it was the play before we kicked the game-winning field goal. It was power to the right and I broke maybe four or five tackles, spun off of a couple tackles, stayed inbounds to make sure that the clock ran down a little bit – I knew that we were in field goal range and I knew that if I got the first down, it’d be an easier kick to win.”

Smith had already rushed for over 100 yards and a touchdown with a kick return score that day. Two players should have stopped Smith behind the line to gain and two more could have tackled him for a lesser gain – but Smith saw an opportunity.

In Carolina, he’ll have another one.