Running Into It: What Went Wrong Against the Eagles 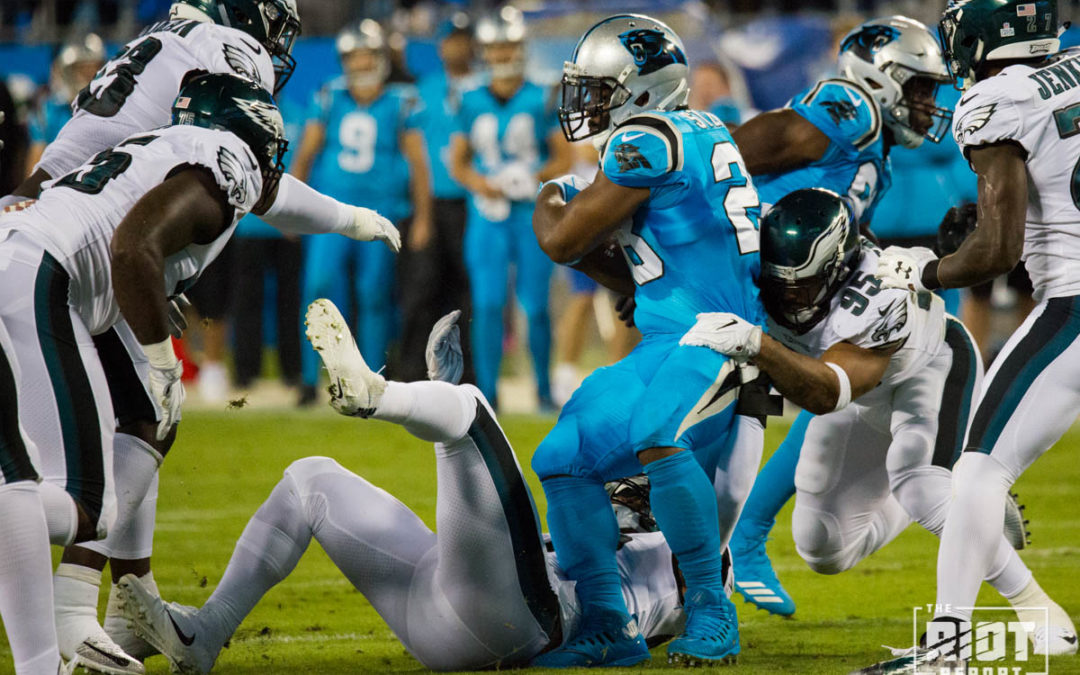 A lot went wrong for the Panthers against the Eagles on Thursday night; some of it can be seen as a high density of bad luck, but much of it was very avoidable. One major area of concern, especially in the early going, was the inability to run the ball with any efficiency. Given the Panthers’ 4-2 standing, they should be a long way from pressing the panic button based on those concerns, but it would be foolish not to examine what went wrong and therefore plan for how to avoid repeating those mistakes.

Much of what went wrong for the Panthers’ run game could have been avoided by using a certain amount of basic arithmetic. As a general rule, blocker are unable to block more than one defender on a play. While sometimes a guard is able to make his block at the line and then again on a safety down the field, plays which require anybody to make multiple individual blocks is unlikely to succeed.

Following that logic, any time that the defense has more defenders in the box than the offense has blockers it should be seen as unwise to run the ball; and yet the Panthers did just than on Sunday. What this meant is that the Eagles had one defender in the box who was left completely unblocked and was able to make an easy tackle for either a minimal game or a loss on many plays. The following plays are an  example of that:

While other things did go wrong on the second play above, the sheer number of defenders in the box all but doomed it from the outset, and the first is an excellent example of just simply leaving a linebacker unblocked. The only caveat to this rule is that read plays can be used in order to force that single defender to read between two options; the read-option is a very basic example of this. The underlying issue with such a tactic is that is requires the quarterback to make a snap decision on what a defender is going to do.

As with most processes, human error is significant in doing this so often; as on the play above; Cam Newton misreads the linebacker, allowing for an easy tackle. The other issue is that, even when the quarterback reads the play correctly, the defender is sometimes still able to recover and make the tackle, as they are not actually being blocked out of the play. Read-option plays do have value, especially in the red zone when space becomes more compacted, but it would be much easier for the Panthers to simply look to pass when the defense loads the box.

When designing a run play, there are certain guidelines that should be followed. One is that the run play should look to create a specific lane, often based on the defensive formation. There is no point in blocking every defender if this doesn’t generate a space for the running back to actually get through. The other is that any play which relies on a player doing anything significantly above the average performance of a given position is unlikely to succeed consistently; the Panthers were guilty of both on Thursday night.

This first play was one which was very close to succeeding, but the gap just wasn’t large enough. Despite the defensive line being shifted to the right, the Panthers still tried to pull Ed Dickson as a lead blocker over left guard, which is in between the right defensive tackle and the end. However, this gap is not very large and even when blocked well, the running back is going to struggle for space. Although some of this might be due to the inexperience of backup center Tyler Larsen, this play needs instead to go over the right guard. These small changes will allow for that extra bit of running room to allow the back into the second level.

On this play, it is somewhat unclear which gap the play was meant to go through. The obvious seam looks to be over the right guard once again, but then the right tackle and tight ends look to also be crashing the right side. This could well be a due to miscommunication, but the result is a running back with nowhere to run. Had Trai Turner maintained his block and the right tackle pulled inside this play might well have stood a chance, but if what was run was actually what was designed the play had little chance from the start.

Then there are plays like this. What was meant to happen here is genuinely difficult to decipher as Daryl Williams, Turner, and Dickson all look to be running to crash down on the right. If Larsen, Matt Kalil, and Andrew Norwell had blocked the two tackles and the remaining linebacker then it is feasible that this could have been a read-option with Newton reading the end, but none of that happened. Instead, the left side of the line seems to run a completely unnecessary trap with the linebacker and end left completely unblocked. As with all of these plays it could be that somebody simply didn’t do their job; this is a serious concern in itself; but the result is a play that is all-but-certain to end in a loss.

While all the previous plays in this section look to have been flawed in their core concept, this final play looks to be more hopelessly optimistic. By pulling four offensive linemen across the formation, they are putting a lot of pressure on rather large men to make blocks on linebackers while running sideways at full speed. Needless to say, this is difficult, and to expect four offensive lineman to do so is, frankly, ludicrous. While this play might well have worked on the board, in reality, offensive linemen are just not fast enough to make this play work.

The final way in which a running play can go wrong is that players sometimes aren’t able to do their job. If this happens consistently then it could well be a reason to look to replace that player, but even the best players make mistakes. The key really lies in the rates at which mistakes are made, and on Thursday the Panthers simply made too many mistakes.

On each of the above plays, the difference between success and failure was one player not making a block. On the first, if Kalil blocks the end then there is a large gap for Stewart to run through. If Chris Manhertz makes his block in the second then Stewart probably gets an extra couple of yards. If Larsen gets to the second level in the third example, then Stewart would have gotten to the edge. Larsen and Manhertz are admittedly players playing in place of those with injuries, but if that is going to be an issue going forward, then the offense might need to limit what it asks these players to do, as they are currently hindering the offense through their mistakes.

This final play was undone not by a blocker being beaten, but rather through a miscommunication between blockers. Dickson and Kalil are both pulling, and it looks as though Dickson looks to pass the defender off to Kalil so he can get to the outside man. However, Kalil seems to miss this and so the defender is left completely unblocked. Devin Funchess’ failure to make his block would likely have doomed this play regardless, but communication issues are just as damaging though easier to fix.

If opposing defenses continue to stack the box then the Panthers should be willing to throw the ball on every offensive snap. All stuffed runs achieve is to force you to pass while behind the chains as opposed to being equal to them. When designing running plays, Mike Shula should look to the old mantra of “Keep is Simple, Stupid” and if things still continue to go wrong, then the focus should be finally put on talent. While not as sexy as the bruising running back or the shifty scat-back, scheme can and should cover a lot of flaws; it certainly shouldn’t create any.

For the Panthers to win on a consistent basis they will needs to have a running game to fall back upon. This doesn’t mean being able to churn out five yards against stacked boxes, but rather being able to capitalize on opportunities to run the ball when teams don’t stack the box. Where the balance lies between Shula calling plays and Cam’s ability to audible out of them it is hard to judge from the outside, but the Panthers’ issues go well beyond any players PFF score. If they continue, the questions that are asked will have to start moving up the chain of command, but by simply taking what the defense gives you without trying to be too clever, the Panthers have every chance of avoiding such issues.